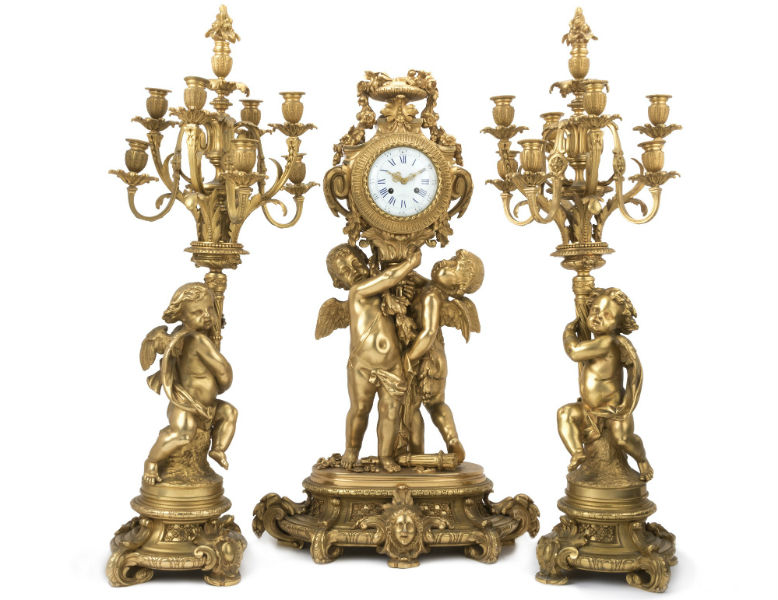 This monumental mantel clock and candelabra garniture set by Parisian maker Charpentier & Compagnie sold within the estimate at $36,000, securing it the top-lot status for the evening. John Moran Auctioneers image

MONROVIA, Calif. – Following the uncertainty caused by extreme weather seen throughout the South, Moran’s was anxious heading into their Traditional Collector auction Sept. 12. However, the excellent selection of property featured in the catalog brought out the buyers from all over the country and beyond, who cast bids online, by telephone and in person throughout the 3 ½-hour event. The sale achieved a respectable sell-through rate of 75 percent overall. Absentee and Internet bidding was available through LiveAuctioneers.

French clocks in particular saw intense bidder competition. The two highest-grossing lots of the evening were monumentally scaled mantel clock and garniture sets consigned from private Southern California collections. A three-piece Louis XVI-style gilt-bronze mantel clock and garniture by 19th-century Parisian maker Charpentier & Compagnie comprising a clock and pair of candelabra was brought to the block with a $30,000 to $40,000 estimate (above). Consigned from a private Beverly Hills, Calif., collection, each piece in the set featured well-modeled winged putti-form bases and inspired multiple telephone and absentee bidders to vie for the lot; a telephone bidder proved successful, paying $36,000 in all (including Moran’s 20 percent house buyer’s premium).

Assigned a $20,000 to $30,000 estimate, a Japy Freres et Cie Louis XVI-style mantel clock and garniture, this example also featuring putti figures modeled in the round, found a buyer at $24,000.

Select pieces of well-made French furniture earned exceptional prices at Moran’s September auction. A Louis XV-style kingwood and satinwood gilt bronze-mounted commode by Parisian cabinetmaker François Linke consigned from a private Los Angeles collection inspired competition between a host of bidders participating from the floor, online and via left bid. The commode sold for $22,800 (estimate: $20,000 to $30,000) (below). 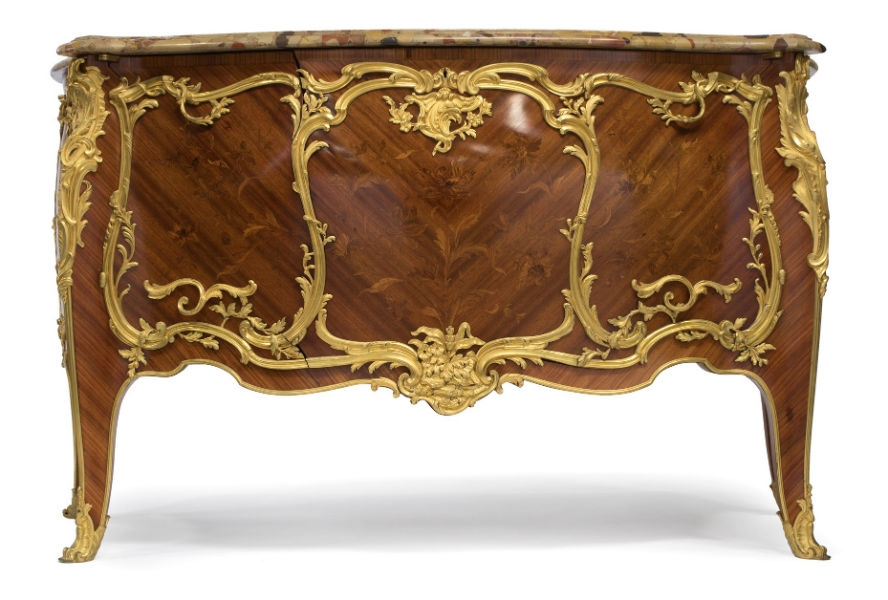 A hard-to-find king-size gilt-bronze mahogany bed frame in the Louis XVI-style was offered with a conservative $3,000 to $4,000 estimate. Owing to the rarity of its size and the quality of its craftsmanship, the bed achieved an exceptional $11,250, thanks to multiple participants casting bids via the LiveAuctioneers platform.

Large-scale decorative objects of many kinds were in favor throughout the evening. A remarkable figurative gilt-bronze torchière base, modeled in the form of a courting couple and raised on a faux marble base, was presented with a $3,000 to $5,000 estimate. After a number of fruitless searches for a signature on the well-modeled piece, Moran’s was unable to attribute it to a maker. Despite this, the single torchière achieved a stunning $9,600 selling price (below). 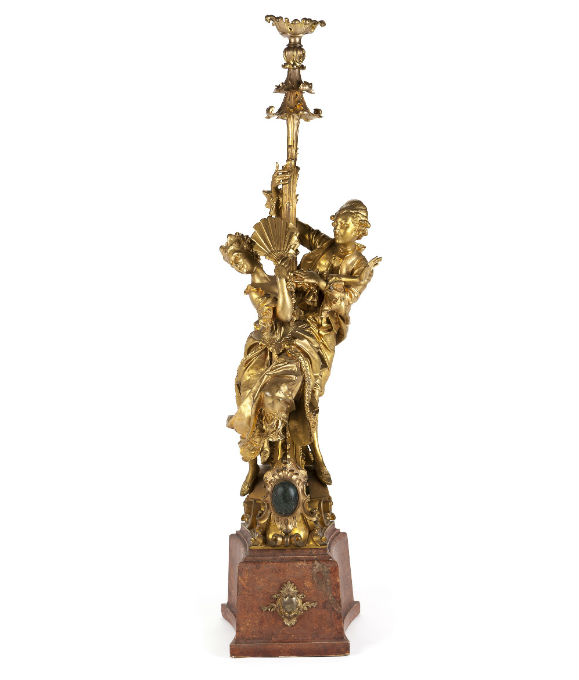 Select Chinese objects did well. An intriguing set of seven enameled silver Chinese boxes (below) decorated with flowers, birds and butterflies threw online bidders into a frenzy. Due to multiple absentee bids cast online, the lot opened at $6,500, well over the $2,500 to $3,500 estimate, and closed shortly thereafter at $8,125. 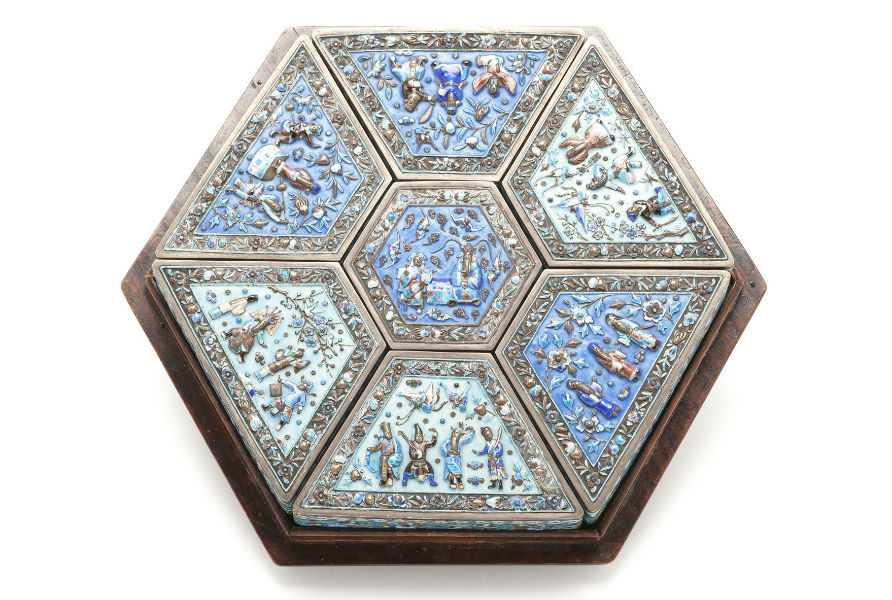 Estimated to bring $2,500-$3,500, this set of enameled silver boxes was one of a select group of Chinese objects featured in Moran’s Traditional Collector catalog (price realized: $8,125). John Moran Auctioneers image

Continental works of art saw solid results throughout the evening. A charming, richly illustrative oil painting of a family in an interior with pet pigeons by Italian artist Jules Zermati (1880-1920) earned $4,200, well within the $3,000 to $5,000 estimate (below). 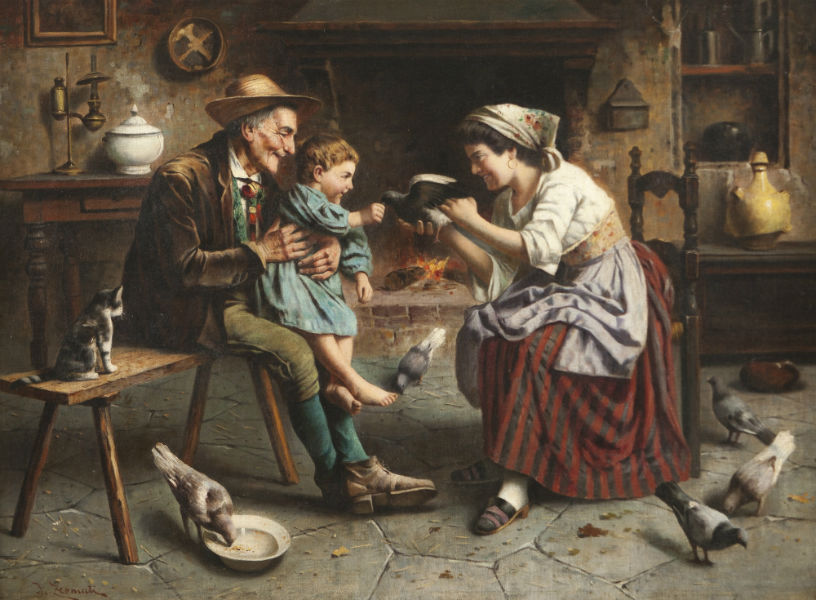 The subject of a spirited bidding war between multiple telephone bidders and a determine floor bidder, Virgin Crowned by One Angel, an original engraving by German artist Albrecht Durer (1471-1528) carrying provenance from the Vincent Price Collection, brought $4,800, over the $2,000 to $3,000 estimate. 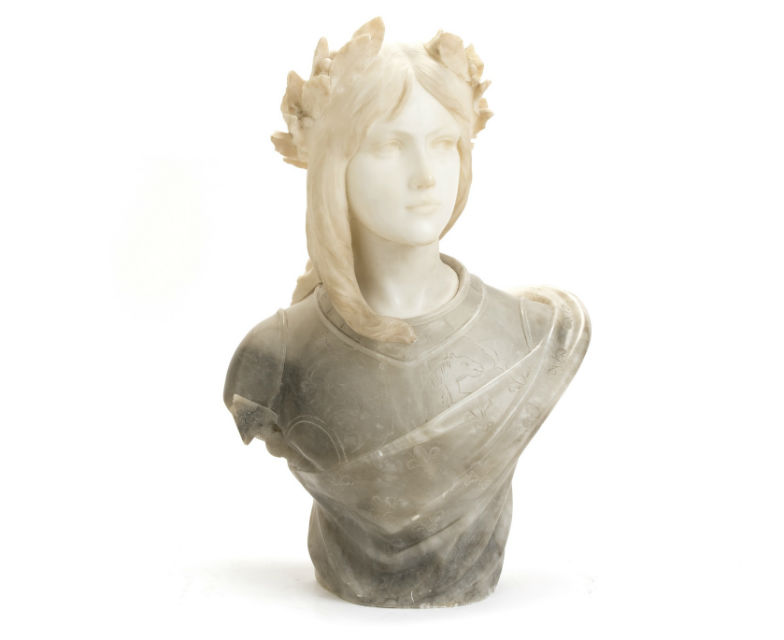