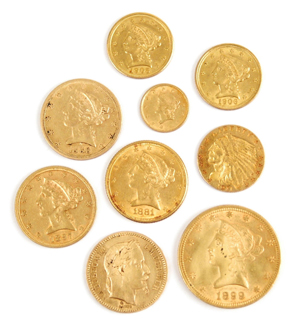 SOUTHAMPTON, Pa. – It was a story that might easily have been written for television – but in this instance, it was strictly nonfiction. While assessing her late father’s possessions prior to sending a consignment off to auction, a Philadelphia woman made a fortuitous discovery in the garage of the family home. There, amongst the garden tools and bric-a-brac, she came across several weighty suitcases that had long been stashed out of sight. Thinking they might contain old clothes or discarded household articles, the woman was taken completely by surprise when she opened the cases to find a hoard of valuable old coins, many of them silver and gold.

“Nobody knew about the collection. Her father had never told anyone about it,” said Tom Wakeley, general manager of Stephenson’s, the company that auctioned the coins on Aug. 20 at their suburban Philadelphia gallery.

The collection ended up being “a tremendous success” at auction, Wakeley said, garnering $88,000 inclusive of 10% buyer’s premium.

“At this sale we had more live bidding than we did absentee and phone bidding because there were a number of nice pieces of gold in the collection. Buyers of gold coins like to inspect them and judge the condition for themselves,” Wakeley explained. Ninety-five percent of the 417 lots offered were purchased by in-house bidders.

A wealth of silver was available to bidders, as well. Seven Morgan half dollars from the early 20th century were sold as one lot for $1,430; while a book containing 27 silver commemorative half dollars from the mid-20th century finished its bidding run at $2,640 – quite an impressive result for coins whose total face value was a mere $13.50. Wakeley commented that condition was what drove the price on the grouping. “The half dollars were in uncirculated or even brilliant uncirculated condition, and that’s what collectors are looking for,” he said. “With money being so tight, collectors won’t spend a lot for average-condition coins, but if a coin is pristine, the money will come out.”

Wakeley commented that, compared to buyers of other types of antiques, collectors who purchase coins at auction will cut to the chase. “At some auctions, bidders will hold out in hopes that the auctioneer will open a lot at a lower price, but at a coin auction, if the auctioneer asks for $25 and the coin is worth $500, they’ll just yell it out,” Wakeley said. “They already have the value figured out according to the price of silver or gold. That helps the auction go a little more quickly, too.” 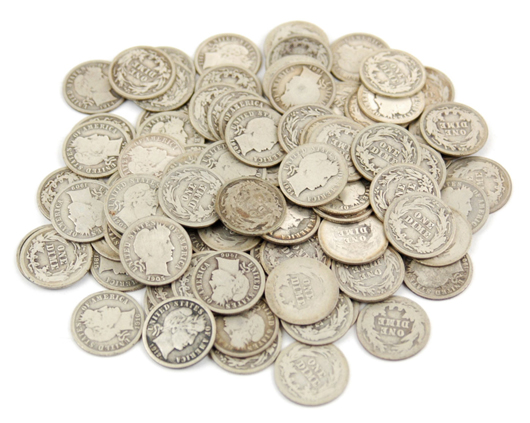 A grouping of Barber dimes from the late 19th century/early 20th centuries sold as one lot for $1,210. Stephenson’s Auctions image.