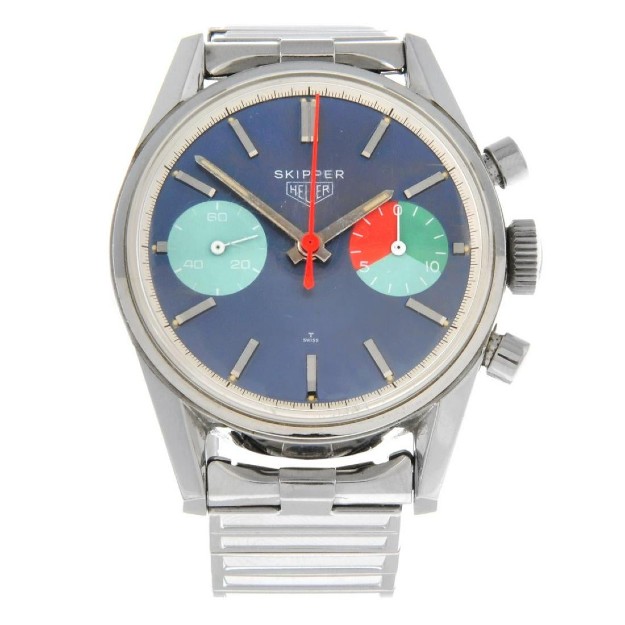 BIRMINGHAM, UK – A ‘one-of-twenty’ Heuer Skipper watch has sold for £57,420 ($74,831) at Fellows Auctioneers, breaking the house record for the most expensive Heuer to have sold at the company. Absentee and Internet live bidding was available through LiveAuctioneers.

The rare watch was designed in the late ’60s to celebrate Emil Mosbacher’s second America’s Cup win. It is believed that Jack Heuer created only around 20 of these watches, with even fewer than that surfacing since. The watch, nicknamed a “Skipperera” due to it using a ’60s Heuer case, was subject to a fascinating bidding war in Fellows’ Luxury Watch Sale, which took place on Monday, Oct. 26. The watch was entered into auction as lot 49 and sold to a telephone bidder after bidding from commission bidders for a hammer price of £45,000 which is £57,420 including fees.

The fascinating dial on the watch was designed to assist racers in sailboats. The Valjoux caliber 7730 ensures the watch can act as a 5, 10 or 15-minute timer for racers who have to wait a period of time for a horn or gunshot to start a race. This is because the effects of wind and water mean it is impossible for racers to start together. The 15-minute register is eloquently displayed on the front of the watch. The stainless steel chronograph contains a blue dial with baton hour markers, and a colored subsidiary recorder dial to three and nine. The watch was fitted to an unsigned stainless steel bracelet with folding clasp. The green for the subsidiary seconds dial matches the color of the yacht’s deck which won the America’s Cup, with green having been originally chosen because of its anti-reflective properties.

The watch was sold in an overall good condition and was also the only Skipper model produced not to feature a calibrated bezel.

“We knew due to the sheer rarity of this Skipperera watch that it would attract interest from around the world and the winner of this item has bagged themselves a real timepiece treasure. The watch sold as part of our hugely successful Luxury Watch Sale, and with this watch selling for £57,420, it shows there is still a strong demand for limited edition timepieces,” said Laura Bishop, watch manager at Fellows Auctioneers.