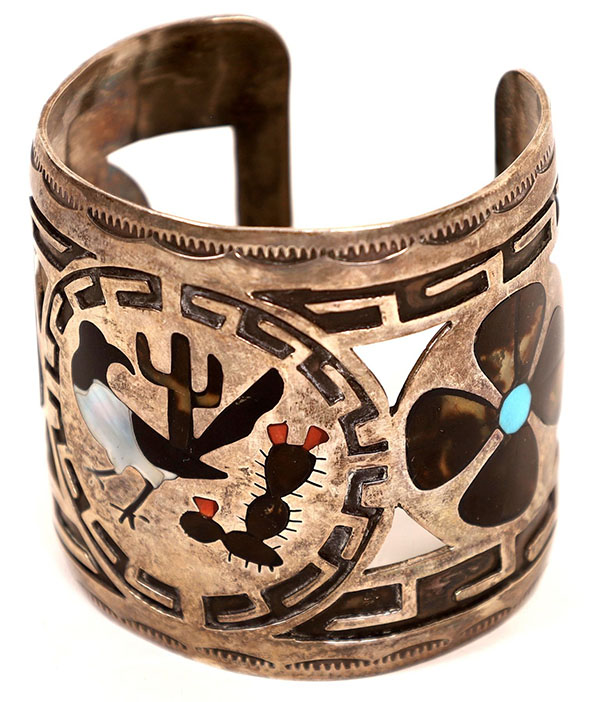 The Levi jeans fragments, which were unearthed in Eureka, Nevada, were the top lot of the sale and its biggest surprise, too – they had a pre-sale estimate of just $100-$150. They consisted of the upper parts of two pairs of early Levi pants, one with a partial label on the side. Each was made for suspenders. 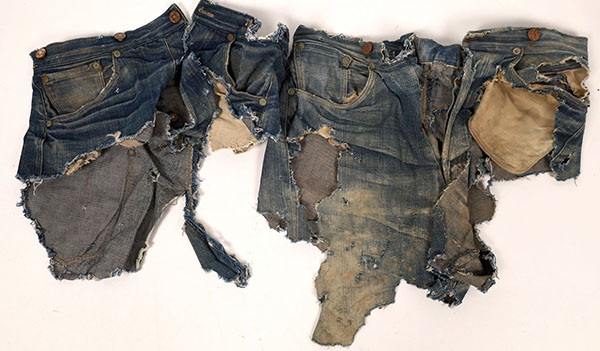 The two photographs of the Apache leader Geronimo’s surrender are copies from the period, and were taken by the Tombstone, Arizona photographer CS Fly. They were mounted by G.W. Bradley in Menasha, Wisconsin. The photos show Geronimo with other Apaches and Native children, plus a white child – Santiago McKinn – who had been kidnapped by Geronimo in 1885 in the New Mexico Territory. 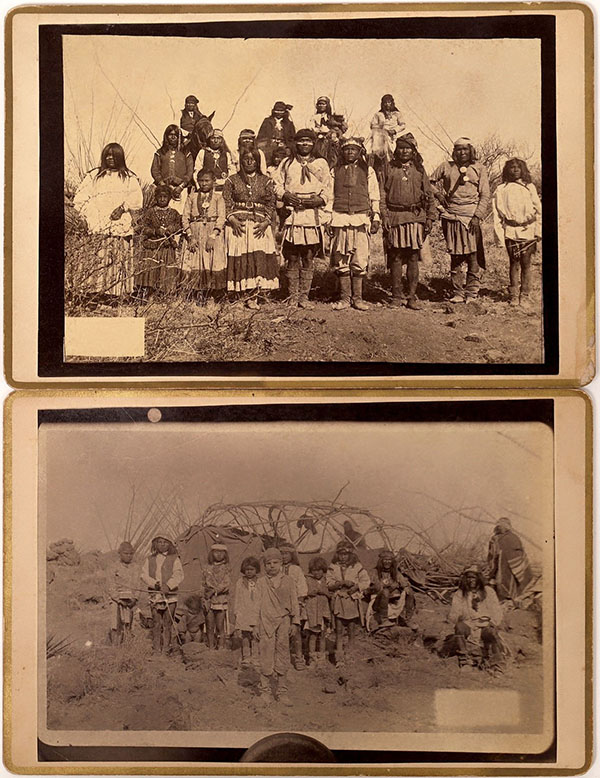 The one-dollar gold coin produced by Christoph Bechtler around 1838 was actual legal tender, even though he made the coins at his home. The German-born immigrant had a jewelry and clock repair business, and miners and merchants convinced him to produce gold coins, which he did from 1831-1840. They were accepted in the Southeast. 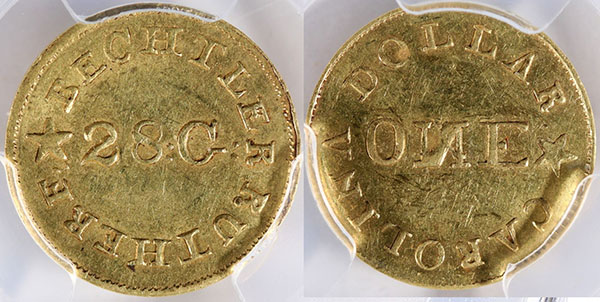 The Day 1 session on August 5, contained 605 lots of general Americana, to include geographic sort, World’s Fairs and Expositions, gaming, bottles and saloon, marbles and toys, jewelry, clothing, music and miscellaneous (including photos, furnishings and ephemera). The Levi jean fragments were the big story, but they weren’t the only clothing lot from the period. 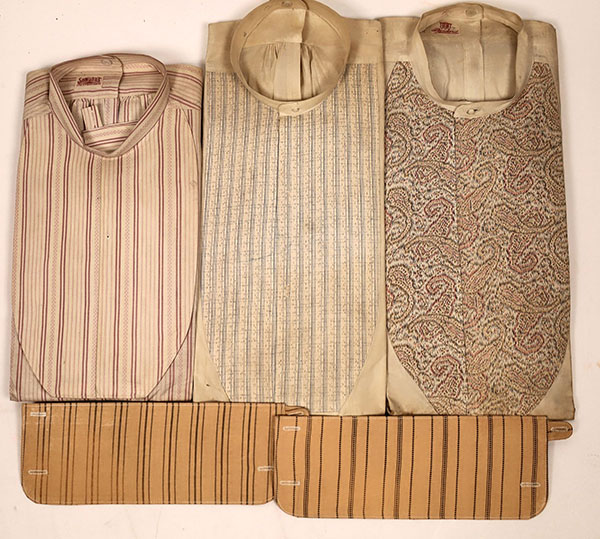 A group of three Victorian-era men’s shirts, unused and in mint condition from the Parker Lion Pony Express Museum, still wrapped and folded as original, sold for $3,750. Also, a collection of seven ornate ceramic beer steins, with all but one featuring movable tops and two of the steins having an internal music box, went to a determined bidder for $1,562. 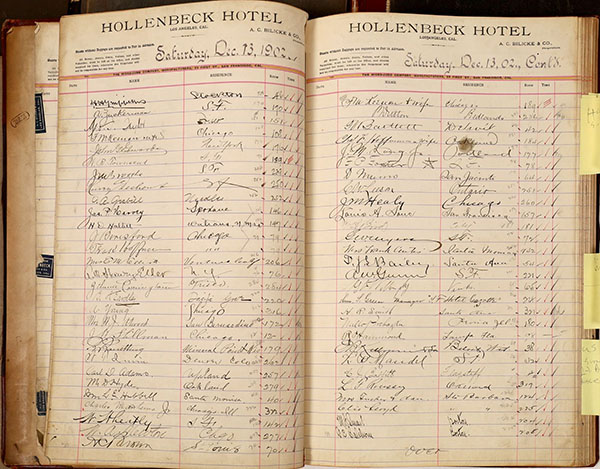 Three ledgers from the Hollenbeck Hotel in Los Angeles, $2,000

Other Day 1 highlights included three historic ledgers from the legendary Hollenbeck Hotel in Los Angeles: three ledgers for the hotel from 1902; one ledger for the hotel restaurant, 1896; and one ledger for the saloon, 1895-1896, which collectively sold for $2,000; and a 1902 map of Los Angeles, compliments of the Hotel Westminster and published by John F. Spring, which realized $2,000. 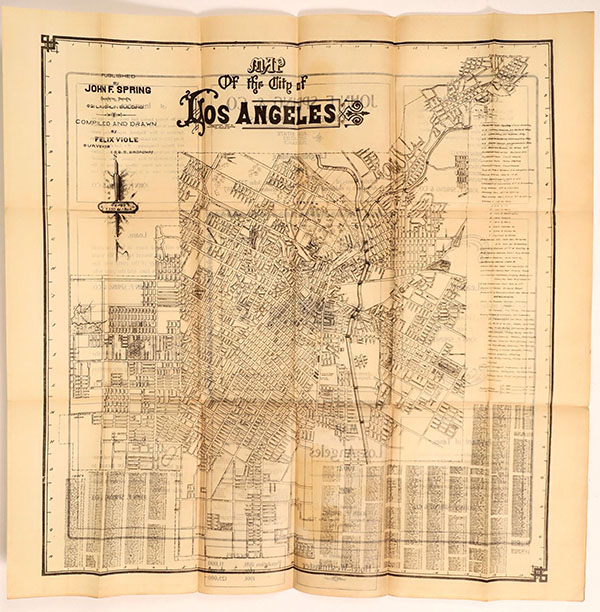 The Day 2 session, which took place August 6, was split between transportation lots (railroad, aviation and automobile) and philatelic (stamps, covers and postcards). In all, 596 lots were offered.

The Day 3 session, conducted on August 7, featured Native Americana (jewelry, artifacts, baskets, pottery and ephemera, to include photos, postcards and books); militaria (chronologically sorted, to include Custer and Pancho Villa collections); political memorabilia, and firearms and weaponry (featuring rare books) – 606 lots in all. The Geronimo photographs were the headline lot.

Other Day 3 star lots included a vintage No. 8 Mine turquoise jewelry set (Navajo Reservation, Arizona), boasting a magnificent squash blossom necklace with 12 squash blossoms, which achieved $5,125, and a World War II letter of surrender, typed in English, dated Oct. 21, 1944, and signed by the German Colonel Gerhard Wick, the first German surrender on German soil. It sold for $2,625. 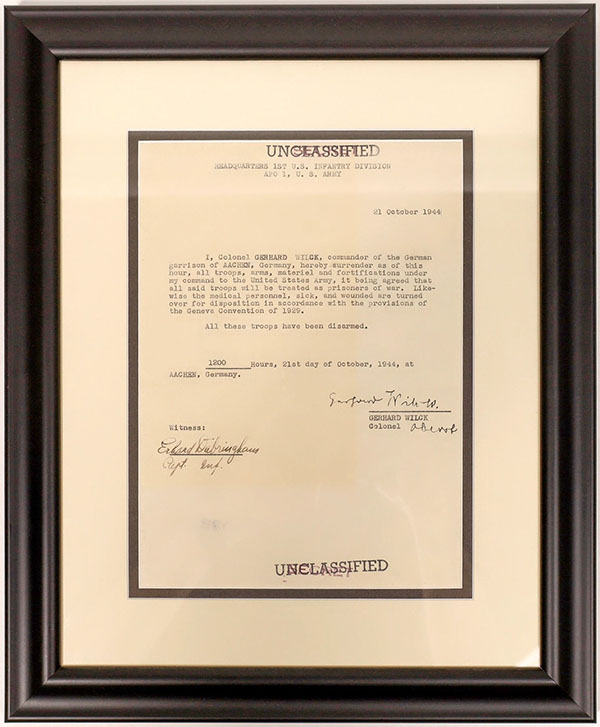 Jewelry pieces crafted by Zuni, Pueblo (New Mexico) Native Americans included an antelope head bolo made by Bruce Zunie (1931-1971), one of the finest Zuni mosaic artists, which rose to $1,750; a large and unusual sterling and inlay cuff made by Dennis Edaakie (1931-2008), which depicted a magpie sitting by a cactus with flowers on each side, and finished at $1,437; and a horse head inlay in tortoise shell belt buckle attributed to Dan Simplicio, which sold for $1,250. 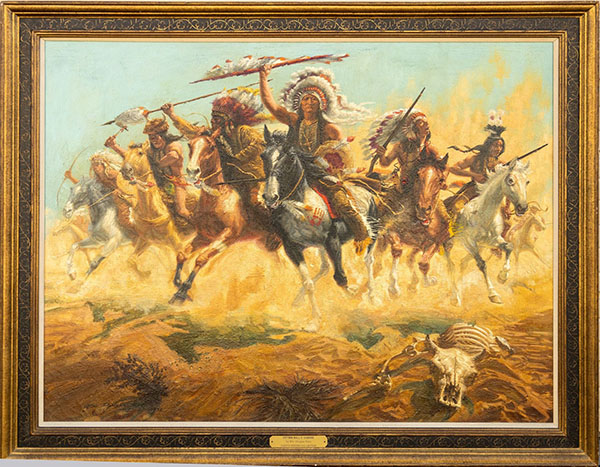 The Day 4 session, held August 8, featured 606 lots of cowboy and Western memorabilia, art, mining collectibles, stocks and bonds, numismatics (coins and currency) and rare tokens. The Bechtler gold dollar was the hit of the session. Also sold was a beautifully painted image of Sitting Bull’s Charge (1972) by William Douglas Rosa, which achieved $4,375.

The Day 5 session on August 9 wrapped things up with 583 lots of general books and bargains and dealer specials, as well as general Americana, philatelic (stamps), stocks, bonds and numismatics (dies, coins, counters and tokens).

To consign a single piece or a collection, you may call Fred Holabird at 775-851-1859 or 844-492-2766, or send an e-mail to fredholabird@gmail.com. To learn more about Holabird Western Americana Collections and its calendar of events, visit www.holabirdamericana.com. 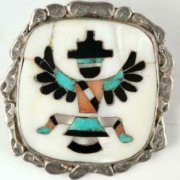 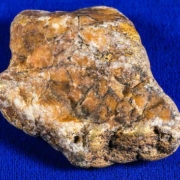 Exhibit of 80+ Banksy artworks opens in Chicago
Scroll to top