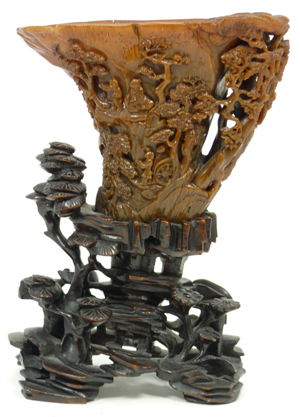 The top lot of the sale was this rare and masterfully carved rhino horn libation cup, which sold for $318,600 to a bidder in Shanghai. Image courtesy Elite Decorative Auctions.

BOYNTON BEACH, Fla. – A rare and masterfully carved Chinese rhinoceros horn libation cup from the 17th or 18th century, just 4 inches tall and fitted to a reticulated teakwood base, sold for $318,600—$68,000 more than the high estimate—at a sale of Asian antiques held March 17-18 by Elite Decorative Arts, at the firm’s gallery.

“We expected the rhino horn cup to be the centerpiece lot of the auction, and we were not disappointed,” said Scott Cieckiewicz of Elite Decorative Arts. “The object sparked a spirited bidding war before an Internet bidder in Shanghai finally emerged the winner.” Cieckiewicz added that the two-day sale grossed about $1.1 million. “It was an excellent auction,” he said.

The rhinoceros horn was of a gently flaring form. It was finely relief carved as a wooded jungle and rendered in high relief to depict a village scene with trees and people working and resting. One side showed scholars climbing the side of a rock mountain, with many types of trees. The other side depicted a family at the base and a tall peony tree growing alongside a rock.

The auction literally attracted worldwide attention. Of the estimated 1,000 registered bidders (the vast majority of whom participated online, through LiveAuctioneers.com), more than 100 were from Asia, about 65 were from Europe and a smattering hailed from Australia, South America and Africa. Phone and absentee bids were also accepted.

Following are additional highlights from the auction. All prices quoted include a buyer’s premium of 15 percent for in-house and phone bids and 18 percent for Internet bids.

Two other lots topped the $100,000 mark. The first was a large, five-panel, 18th century Chinese throne screen made from Zitan wood and possibly given as a wedding present for someone of high imperial status. It brought $153,400. The use of Zitan for furniture was favored especially by the Ming and Qing imperial courts and its use was restricted to palace workshops.

The other lot was a large genuine rhinoceros horn from the 18th or 19th century, with no carving at all. The antique horn measured 26 inches in length and was 18 1/4 inches in girth at its widest point, with a total weight of 3,666 grams. The horn realized $109,250. Its provenance was quite intriguing: Hoover Vacuum owned it, having acquired it from the Lord Montague Museum.

The auction featured many examples of imperial quality Chinese hand-carved red coral group figures, which were stunning in their attention to detail. Dating to the Ch’ing dynasty, the beautifully carved figures varied in size from 7 to about 17 inches in height. They were perched on handsome fitted wooden bases, and some even boasted gorgeous silver inlay.

An exquisite Chinese hand-carved red coral figure from the late Qing dynasty, depicting a mother holding flowers with her two daughters playing at her side, masterfully carved and with incredible detail throughout, breezed to $31,050; and a massive (19 inches tall, 10 inches wide) carved Chinese red coral figure depicting Guan Yin with four birds, changed hands for $31,050.

A superb Chinese hand-carved red coral figure depicting a seated happy Buddha holding a sack to his right hand with a beaded necklace and coins and a flowing robe, from the Late Qing period, fetched $28,750, and a Chinese relief carved coral group depicting a mother with a young child climbing a tree, also depicting peaches and a paradise bird, circa 20th century, hit $27,600.

A finely carved Chinese red coral group figure depicting three children holding up a fourth child who is riding them like a horse, finely detailed throughout and signed at the bottom “Zhu Yun,” from the Cultural Revolution period, rose to $19,550; and a 20th century Chinese relief carved coral group figure of seven children playing around a tree and table made $14,160.

Rounding out just some of the auction’s top lots, a pair of stunning antique Chinese enameled pottery four-panel plaque table screens, each screen having four porcelain panels with a raised horses design, went for $13,570. The 19th century screens also had trees, people, fences and rock formations. Each plaque was 17 inches tall, 5 1/2 inches wide.

Elite Decorative Arts has two auctions planned for the immediate future. The first will be a general decorative arts sale, plus about 100 Chinese works of art, slated for Saturday, March 31. The second, scheduled for Saturday, April 28, will feature decorative arts, artwork and estate jewelry. Both will be held in the firm’s gallery at Quantum Town Center in Boynton Beach, Fla. 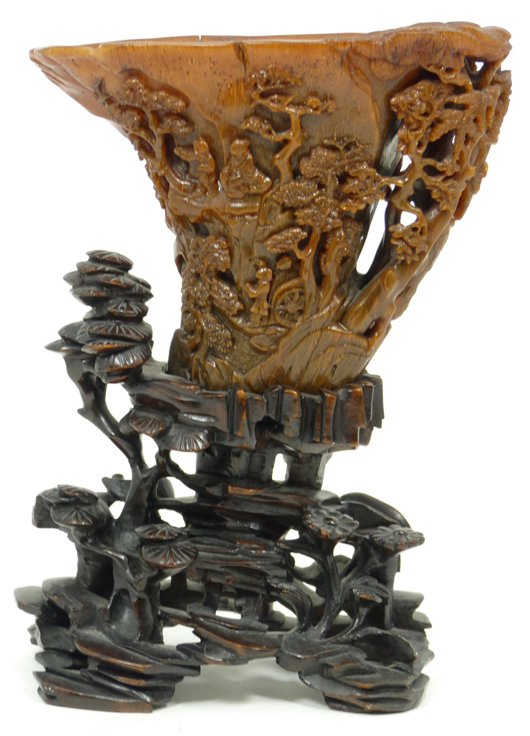 The top lot of the sale was this rare and masterfully carved rhino horn libation cup, which sold for $318,600 to a bidder in Shanghai. Image courtesy Elite Decorative Auctions. 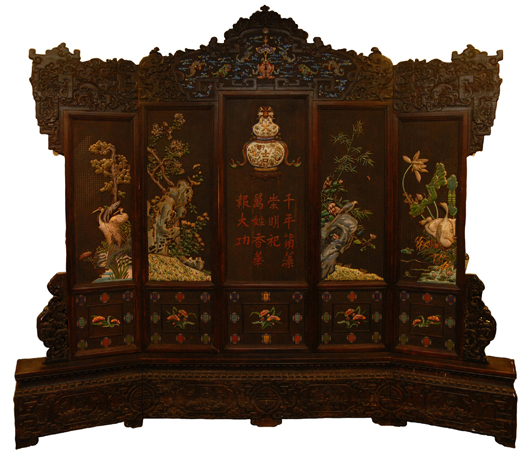 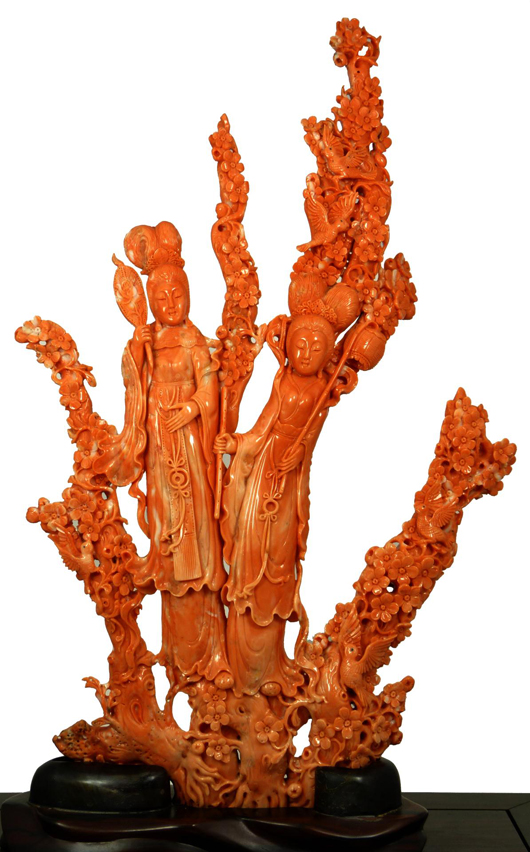 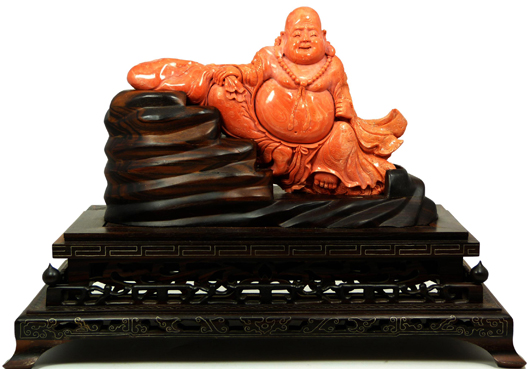