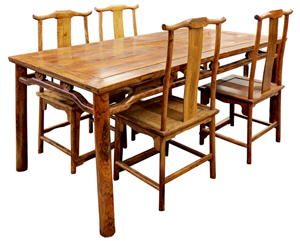 This table and four chairs sold for $179,000 and was one of the 14 lots offered in this collection that realized over $1.1 million. Clars Auction Gallery image.

OAKLAND, Calif. – Clars’ Feb. 15-16 fine art, antiques and estates auction will go down in their history as the largest sale to date, realizing almost $3.3 million with over $1.3 million realized on the property offered from the important Gerber estate from Reno, Nev.

After the two-day sale, President Redge Martin commented, “It was also one of our longest sales due to the huge crowds in the saleroom, very strong Internet interest and so much bidding.” The presale interest in this sale was very notable as 3,000 people attended the previews and 47,000 viewed the catalog online. During the two-day sale, 900 live bidders were registered and 4,500 signed up online to participate.

While all of the categories performed beyond expectation, it was the Asian category that stunned both staff and crowd. Coming from the Gerber estate, were 14 lots of Chinese hardwood Vietnamese huanghuali furniture ranging from tables, to chairs, screens and cabinets. Overall, the lots offered in this collection carried estimates of $1,000 to $8,000 but those were left in the dust once the furious bidding began. The top seller in this collection and the sale overall was a pair of huanghuali and mixed wood cabinets that achieved the astonishing price of $245,000. The second highest in this collection was a table and four chairs that sold for $179,000 followed by a pair of cabinets that sold for $131,000, and a table, the top inset with floating panels, which brought $101,000. In total, this 14-piece collection achieved $1,156,000. A second offering of the huanghuali furniture from this estate will be offered at Clars on March 16.

The fine art category had a record-setting day achieving the highest U.S. price to date on a work by Clifford Possum Tjapaltjarri (Australia, 1932-2002) titled Possum Dreaming, achieving an impressive $131,000.

Coming from the Ruttenberg Collection of Chicago, three works by sculptor Richard Howard Hunt (American, b. 1935) all flew past high estimate with the highest selling for $27,000. Furthering the sculpture offerings, Sphère-trame from 1962 by Francois Morrelet, also commanded an above-estimate price of $18,000.

After being held in a private collection for almost five decades, a dynamic work by Adolf Schreyer (German, 1828-1899) titled The Imperial Courier, achieved a price of $17,000, indicating that quality 19th century paintings remain a good investment.

The main event in this category was the exceptional art glass, most of which came from the Gerber estate and included a host of works from artists and studios including Lundberg, Orient & Flume, David Lindsay, Michael Nourot, Steve Smyers, Zellique and Lee Hudin. More than 180 lots of paperweights, vases, bowls, chargers, stemware, and American Brilliant cut crystal realized $71,000. From another estate, was a Dante Marioni (American b. 1964) monumental art glass group that sold for $13,000.

The sterling offered had a 99 percent sell through, which included over 10 lots of Burmese silver from the Gerber estate. This collection of bowls, boxes and hanging plaques realized a total of $16,000. An American Neo-Renaissance Gorham coin silver five-piece hot beverage service, by John William Tucker, San Francisco, 1850-1886, and a Tiffany & Co. Victorian style sterling silver tea kettle on stand, both achieved $6,000. A late 19th century Japanese sterling silver teapot fetched $6,500.

The showstopper in this category however, was certainly the 2001 Ferrari 360 Modena Spider. Sporting the deepest and richest blue and having only 10,500 original miles, this marvel of motordom zoomed off for a smooth $95,000

Significant pieces of Olympic and skating memorabilia from Peggy Fleming’s personal collection were offered and achieved winning results. Her Rolex Datejust President 18K yellow gold wristwatch achieved $11,000 and a pair of her custom-made ice skates by Harlick of California sold for $3,000. In all, these select offerings skated away for over $15,000. 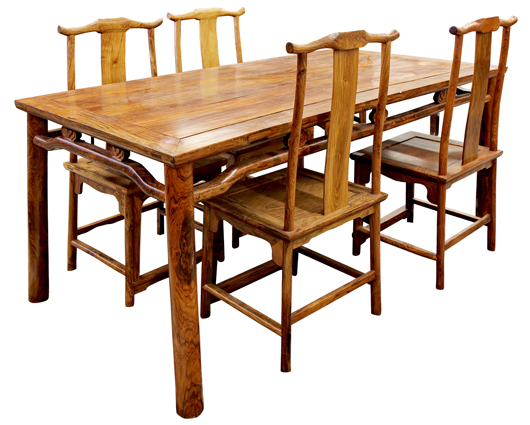 This table and four chairs sold for $179,000 and was one of the 14 lots offered in this collection that realized over $1.1 million. Clars Auction Gallery image. 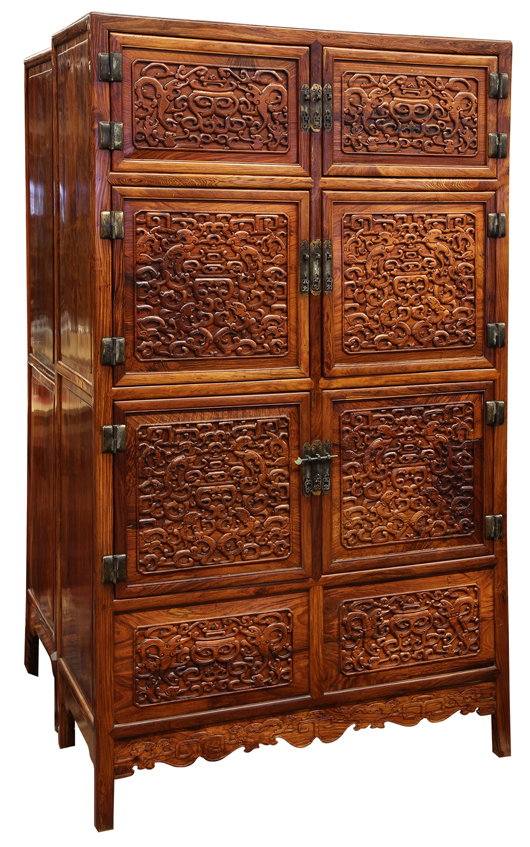 Coming from the Gerber estate, this a huanghuali and mixed wood cabinet (lot 1 of 2) achieved the astonishing price of $245,000. Clars Auction Gallery image. 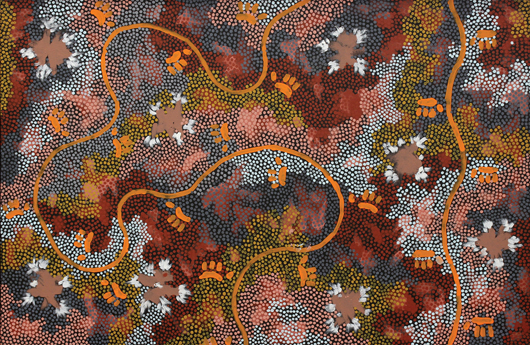 Clars Auction Gallery achieved the price of $131,000 for ‘Possum Dreaming’ by Clifford Possum Tjapaltjarri (1932-2002), making this the highest auction price ever for the artist in the United States and sixth-highest price overall for this artist. Clars Auction Gallery image.

This welded metal sculpture, one of three offered, by Richard Howard Hunt (American, b. 1935) achieved over 10 times its high estimate selling for $27,000. Clars Auction Gallery image. 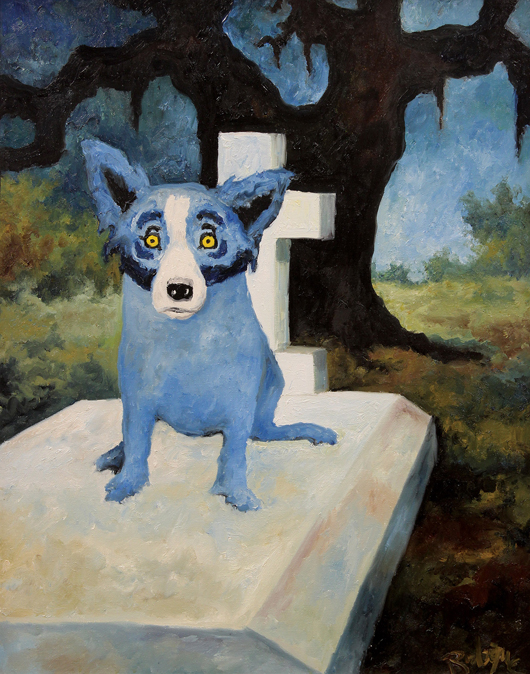 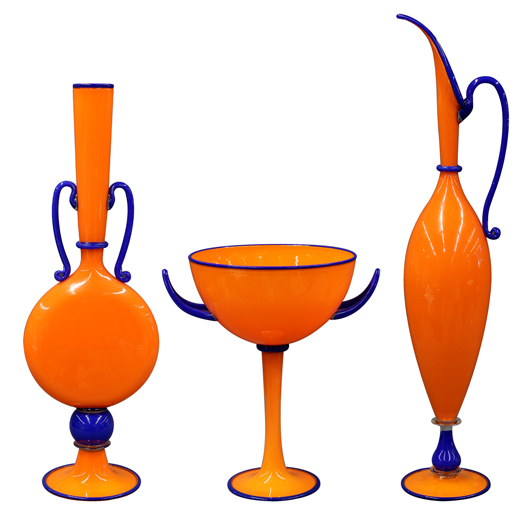 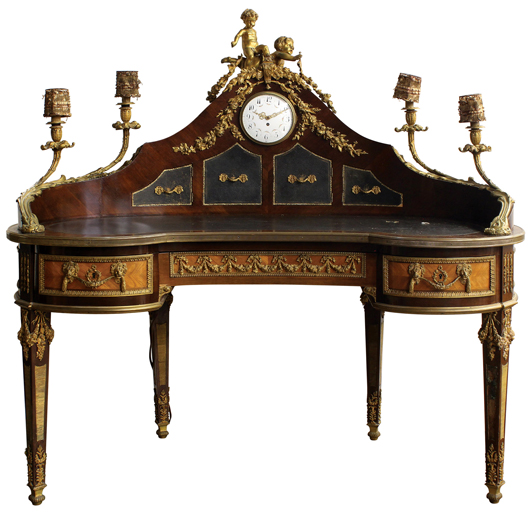 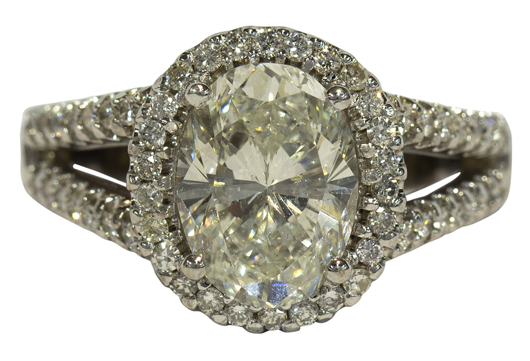