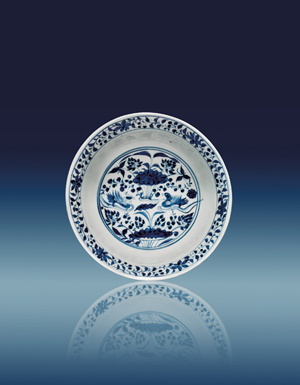 NEW YORK (LAPRS) – There are only a few high-profile auctions that Asian art aficionados consider accurate indicators of how the marketplace is trending. One of them is I.M. Chait’s annual Asia Week Auction, a perennially trustworthy point of reference for what’s selling today and what’s likely to be selling tomorrow, whether rare Chinese ceramics or precious jades.

With Chait’s recent Asia Week Auction results as the basis for market prognostication, it’s safe to say there’s no end in sight for the spectacular run Chinese antiques have been enjoying over the past few years. The Beverly Hills, Calif., company’s March 22 auction held at Manhattan’s historic Fuller Building chalked up nearly $2.1 million, with a robust 83% sell-through rate.ll prices quoted include a 22% buyer’s premium.

“The market for Asian art, especially Chinese, is not even slowing down. Even the Japanese market seems to be having a little resurgence,” said Chait’s founder and auctioneer Isadore M. Chait, who has been actively dealing in the specialty for 45 years. If there is any noticeable softness at all, it is in the area of ivory, Chait noted, and it’s not for lack of collector interest.

“Ivory has taken a little dip because people are still unsure as to the ramifications of our country and other countries’ viewpoints on endangered species. The laws are still vague,” Chait said. “Everything else in Chinese art is just rolling along at breakneck speed, and the appetite for good things is voracious.”

The 100+ bidders who attended Chait’s 5-hour sale – approximately 70% of whom were from Mainland China – showed obvious sophistication in their buying and claimed many of the day’s top prizes. But it was far from a cakewalk. They faced formidable competition from beyond the gallery walls. There were 180 absentee and telephone bidders in the mix, as well as 469 additional bidders participating online through LiveAuctioneers.com. Postsale statistics revealed that Internet bidders prevailed on nearly 30% of the 353 lots offered.

The auction’s top lot was a superb, 12-inch (dia.) Yuan Dynasty blue and white bowl with a classical motif of Mandarin ducks in a lotus pond. With provenance from the T.T. Tsui Museum of Art, the highly important 14th-century ceramic sold within estimate to an in-house bidder for $128,100.

Another stunning blue and white design was the marked 16th-century Chinese Ming Dynasty Wanli round box with domed cover. Both the base and lid were decorated with images of dragons contesting a pearl amid clouds. In pristine condition, it settled at $54,900, the midpoint of its $50,000-$60,000 estimate.

Eleven phone lines were on the ready as one of the auction’s signature pieces – a large and masterfully carved Chinese spinach jade brushpot – was introduced. Decorated with a continuous landscape scene of several groups of scholars playing chess amid bamboo, pine and rockery, the vessel attracted rapid-fire bidding before closing at the above-estimate price of $73,200.

Many hands were raised when an artwork of quite a different style, a marked Daoguang Period square-form flambé porcelain vase in plum and blue glaze, was opened to bidding. The beautifully balanced baluster-form vase with tubular handles more than doubled its high estimate at $19,520.

If there was one category that took everyone by surprise, it was the Chinese textiles. A fine kesi-type robe adorned with images of a large four-claw writing dragon and two smaller dragons in the clouds had been entered in the sale with a $3,000-$4,000 estimate. Bidders had a different idea, however, and competitively pushed the selling price to $36,600.

An Internet bidder claimed the top bronze in the sale, a gold-lacquered and polychrome-painted Ming Dynasty Buddha. The 16-inch Buddha with hands in “earth-touching” (bhumisparsha) mudra had been estimated at $8,000-$10,000 and sold online for $54,900. 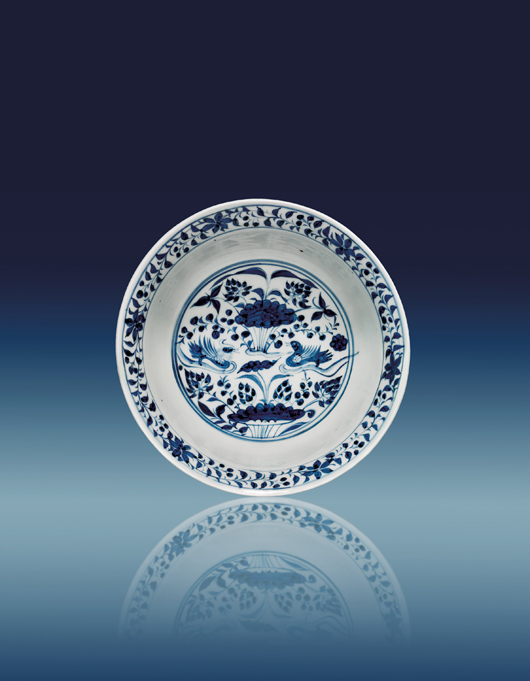 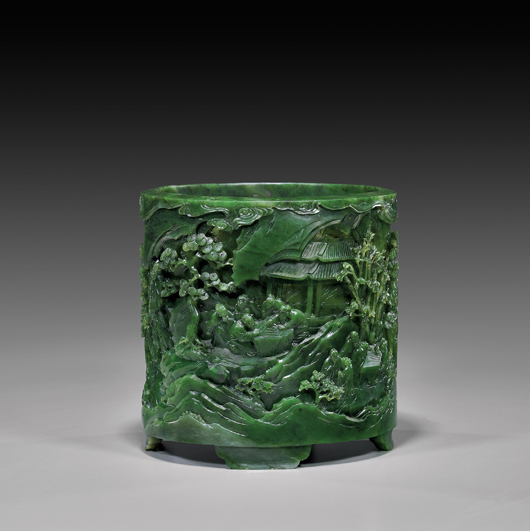 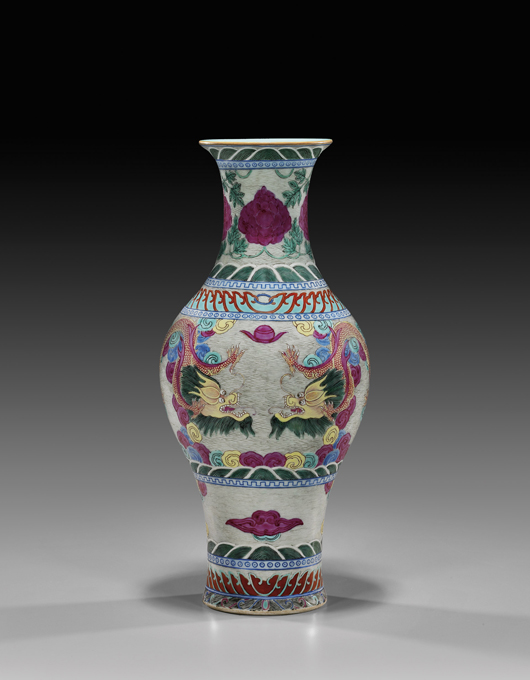 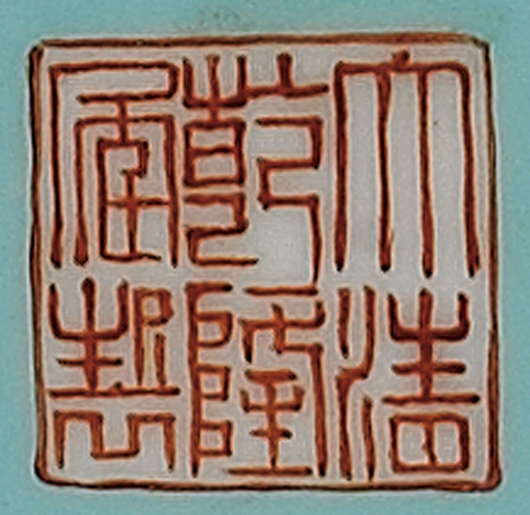 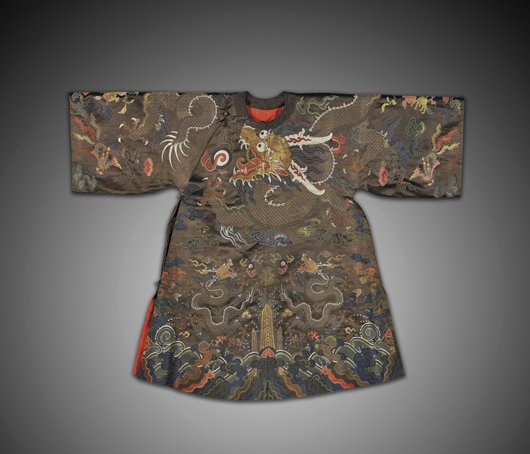 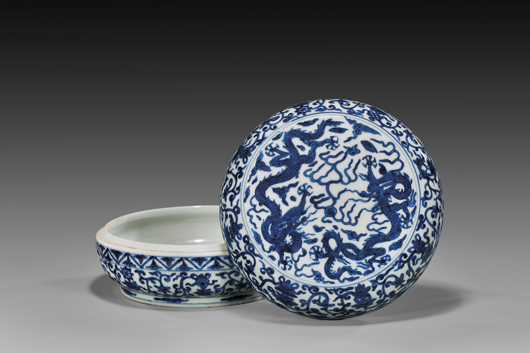 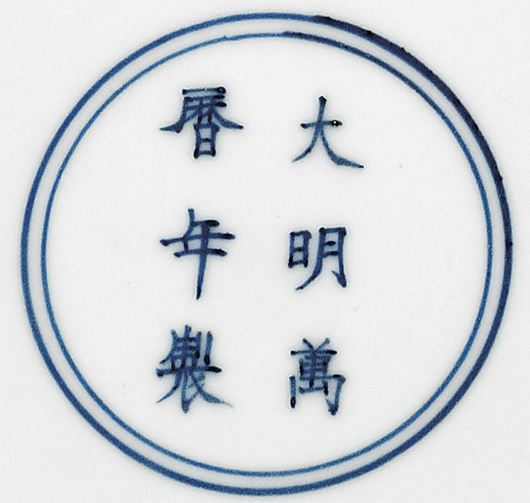 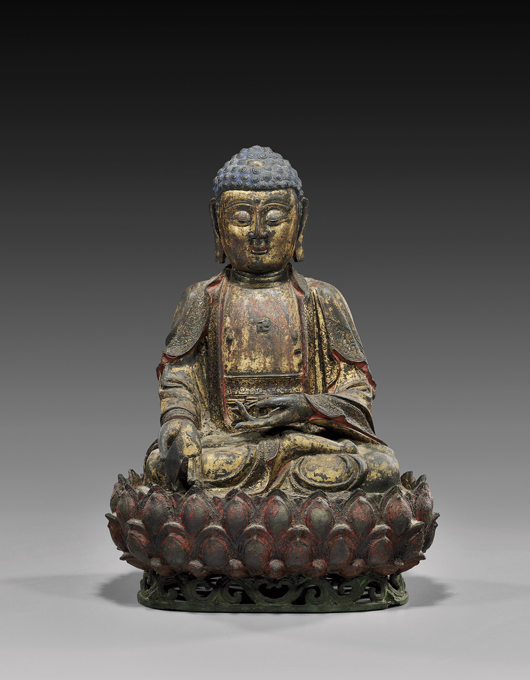