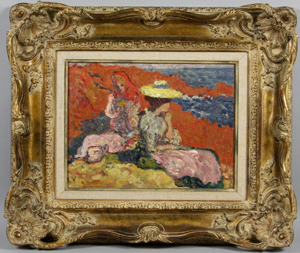 BEVERLY, Mass. – Kaminski Auctions’ December Estates Auction, which took place Dec. 28-29, offered treasures from the San Diego estate of Robert O. Peterson. Peterson, founder of the Jack in the Box restaurant chain and noted patron of the arts, was a discerning collector of antiques and fine art. Strong sales and enthusiastic bidding throughout the two-day auction made the event an unqualified success, with many items selling well above their estimates. Prices realized reflect a 15 percent buyers premium.

Highlighting the Peterson collection was a painting by French artist Louis Valtat (1869-1952), Jeune Femmes Sur Les Rochers. Valtat is considered to be one of the leaders of the Fauvist movement and a link in the stylistic transition between Monet and Matisse. The 1902 oil on canvas proved irresistible to bidders, selling for an impressive $54,050 to a floor bidder.

From the same collection were two sculptures by West Coast artist Donal Hord. Both pieces are sculpted from lignum vitae, a strong trade wood known for its uncommonly high density. Summer Rain, the larger of the two sculptures measuring 49 inches in height, brought $31,050, while the 43-inch Descending Sun brought $36,800. Both pieces are signed by the artist on their respective bases.

A rocking chair by noted furniture designer Sam Maloof (1916-2009) was also among the highlights of the Peterson estate. Maloof’s work is highly sought after and is held in the permanent collections of both the Metropolitan Museum of Art and the Smithsonian American Art Museum. The teakwood rocker, signed “No. 5, 1982, Sam Maloof,” measures 45 inches in height. After a feverish volley of floor bids, the rocker rose to $31,050.

Jewelry was also in demand at the auction, with many pieces selling well into the six-figure range. An 8.18-carat sapphire, diamond and platinum ring complete with GIA report sold for $13,800, exceeding its high estimate by more than $4,000. Leading the jewelry category was a 4.65-carat round brilliant cut diamond ring, which realized $40,250, well beyond its original high estimate of $25,000.

“This important San Diego estate represents a lifetime of meticulous collecting on the part of Robert Peterson,” said Frank Kaminski. “The room was buzzing with energy and our bidders were quite pleased with this fine selection.” 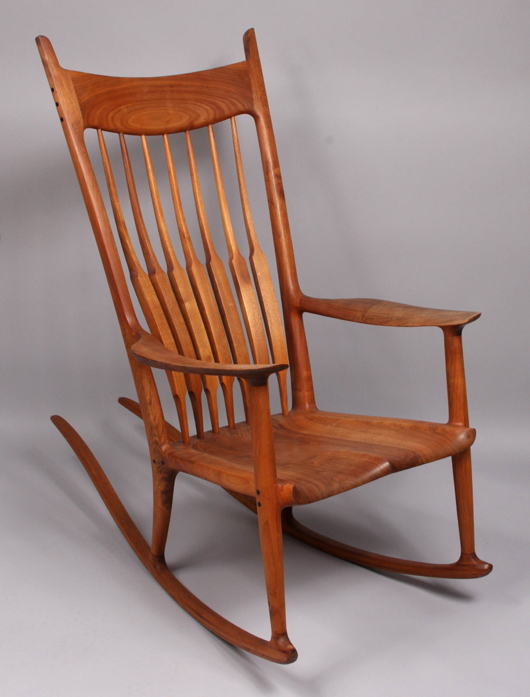 Signed, numbered and dated on base, the Sam Maloof teakwood rocking chair crept above to high estimate, selling at $31,050. Image courtesy of Kaminski Auctions.