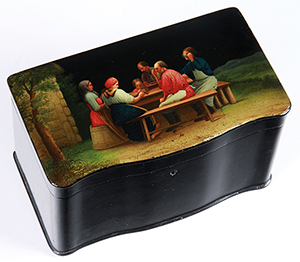 CEDAR FALLS, Iowa – In an aptly named “World Treasures” sale, buyers from over 50 countries descended on this Midwest hamlet for a two-day auction totaling over $2.5 million in sales. Jackson’s International played host to buyers from around the world on June 11 and 12 as they sold over 1,000 lots featuring treasures from Russia, Asia, Europe and America. LiveAuctioneers.co provided Internet live bidding.

The sale started out with a small but interesting collection of European artwork selling, including a charming genre scene painting of Apple Pickers by Cesar Pattein (French 1850-1931) that sold for $13,750 to a collector in Nebraska. An oil on board by Ludolf Liberts (1895-1959) depicting the Boulevard Haussman at Night sold to a Latvian buyer for $16,250.

Jackson’s once again offered a unique selection of Russian treasures to choose from. Highlights of this section of the sale include a small (measuring 6.6 inches) Russian silver and enamel shaded lidded box by the 11th Artel, which crossed the block at $18,125.00 going to a buyer in New York. An interesting, diminutive (height 3.75 inches) Russian silver card case engraved with maps, coats of arms, figures, views and statistics sold to a buyer in Moscow for $18,750. A watercolor of Prince Vladimir by Ivan Ivakovlevich Bilibin (Russian 1876-1942) sold for $23,750. An interesting group of Russian watercolors by satirical Russian/American artist Vladimir Fedorovich Kadulin was offered in this sale featuring scenes of social realities that still resonate with those who grew up in the Soviet system and reflect the attitudes of many Russians who were violently suppressed by the early communist government. Although an unknown artist, together the group sold for nearly $70,000.

Another interesting Russian lot was a grouping of 29 original handwritten manuscripts and artworks by Russian modernist writer Alexei Mikhailovich Remizov (Russian 1877-1957). The grouping comprised of 29 original manuscripts or abstract compositions signed or monogramed by Remizov. This grouping sold to a Russian buyer for $30,000 against a conservative $3,000-$5,000 estimate. Another interesting Soviet period piece to sell was a painted plastic cigarette case presented to the Soviet military commander Vasily Gregoryevich Terentiev (1899-1957), dated 1942. The small case, 4.25 inches, went to a New York collector for $7,500.

This sale also featured a life collection of Russian lacquer boxes and other lacquer objects. The Russian lacquerware items were acquired by the consignor from the exhibition “Russian Lacquer Art from Two Centuries” held at the Museum for Lacquer Arts in Munster, Germany, May 11, 1995 through Jan. 4, 1996. Most were published and illustrated in the exhibition catalog. Together, this grouping totaled $110,000.

One area of expertise Jackson’s, and particularly President and CEO James Jackson, is well-known for is the realm of Russian Icons. As such, a Jackson’s auction would not be an auction without icons. Some highlights include a Russian presentation icon of St. Nestor the Chronicler, Moscow, 1896. This icon headed back to Russia at over $56,000 against a $20,000-$30,000 estimate. The next lot to sell was a Russian icon of the Kazan Mother of God, with marker’s marks for Feodor Ruckert, Moscow, 1899-1908. This slight icon (3.6 inches x 2.7 inches) from the Dr. John Sinsky collection sold to a Moscow buyer for $52,500. Other highlights include a 17th century Kazan Mother of God icon selling for $37,500; a Russian icon of St. Nicholas, Moscow, circa 1900 selling for $27,500; and a large icon of St. Michael Metropolitan of Kiev, Moscow, circa 1892 finished at $20,000 to a St. Petersburg buyer who outbid several other phone bidders.

One of the many interesting lots in American art was a small sketch by American impressionist Frederick Carl Frieseke (1874-1939) depicting a woman with a pink parasol. The painting will be included in the upcoming catalog raisonne on the artist being compiled by his grandson, Nicholas Kilmer. The winning buyer was a private collector on the phone who acquired the sketch for $37,500.

Another interesting lot offered was a cache of photograph negatives by noted American photographer, Arnold Genthe (1869-1942). Typically recognized for his work after the San Francisco earthquake, Genthe was also a pioneer in the world of modern dance photography. Some of the negatives found in this collection featured named models and dancers in a variety of poses and settings. The archive of over 450 negatives, in various states of condition, sold to a Midwest gallery for $5,500.

This sale also featured a small mix of Old Master and European paintings. Some examples include a 17th century Italian school painting of St. John the Baptist and St. Claire of Assisi Presenting a Monstrance to the Infant Christ and the Virgin Mary, which sold for $10,000 against a $6,000-$9,000 estimate. An oil on panel painting by German artist Ignatz Alois Frey (1752-1835) depicting a church interior and dated 1792 brought $5,000 and will return to its native Germany. A large oil on canvas by Jan Styka (Polish 1858-1925) depicting the Sacred Heart of Christ was purchased by a private institution, crossing the block at $12,500, and bringing almost double the conservative $5,000-$7,000 estimate. A lovely Madonna and Child painting by German artist Franz Ittenbach (1813-1879), measuring 19 inches x 10 inches sold for $20,000.

European artwork gave way to decorative arts, with a variety of objects being offered including a Rene Lalique French art glass Moineaux amber opalescent table clock, selling to a private collector for $4,250 and a fine Loetz Austrian Federzeichnung mother of pearl art glass vase surpassing expectations bringing $11,250, selling to a private Arizona collector. A large Meissen polychrome and gilt-decorated porcelain “Elements” ewer from the 19th century fetched $13,750 after heated bidding. And a large KPM plaque, artist signed by Carl Meinelt after the original painting by August Riedel depicting Judith with the head of Holofernes sold to a California buyer for $31,250.

Other European works to sell included an interesting and attractive Louis XVI-style mineralogical cabinet after George Haupt that was presented by Gustave III of Sweden to Prince de Conde in 1774. The early 20th century example sold to an Italian buyer after much bidding, finishing at $32,500. Bronzes also fared well with some highlights being a beautiful gilt-bronze lamp by Raoul Larche (French 1860-1912) titled Loie Fuller, which sold for $18,750 to an East Coast buyer. A Cupid bronze by French artist Louis Alexander Bottee (1852-1940) sold to an Arizona buyer, finishing at $6,875, and a Louis Chalon (French 1866-1940) bronze depicting sea sprites, circa 1895, sold to a Canadian private collector for $21,250. Other sales of note from decorative arts include a Viennese-style enameled silver-gilt and jeweled animated bird and musical box selling to an Egyptian buyer for $6,250 and a nice pair of silver and ivory jousting knights, probably German, which finished at $13,750, going to a Californian.

The sale concluded with a variety of Asian works including a Japanese silver and shibayama cabinet from the Meiji period selling for $21,250 against a $6,000-$9,000 estimate and an exceptional Japanese carved ivory okimono from the Meiji period fully carved in the round of a well modeled young standing samurai in full attire finishing at $17,500. Asian art also did quite well, especially an oil on canvas of Two Florists by Vietnamese artist Le Pho (1907-2001), which finished at $35,000 after having a spirited battle on the phone lines. A pretty painting depicting a Canton singer by Chinese artist Guan Zeju (b. 1941) sold above its $1,500-$2,000 estimate, finishing at $6,250. Asian decorative arts continue to draw wide interest including a Chinese carved white jade brush pot and cover, selling to a Beijing buyer for $16,250, and a Chinese carved jade boulder, height 7.5 inches, crossing the block at $6,250 against a $3,000-$5,000 estimate. 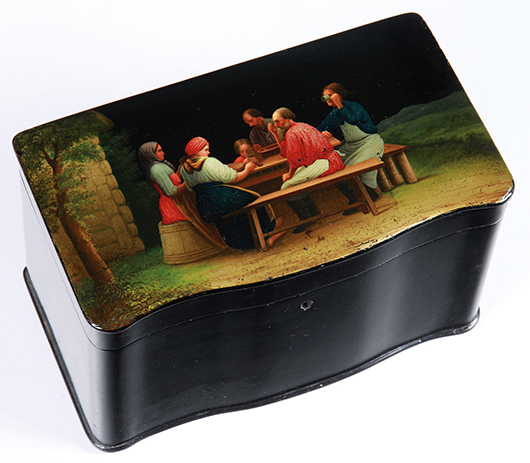 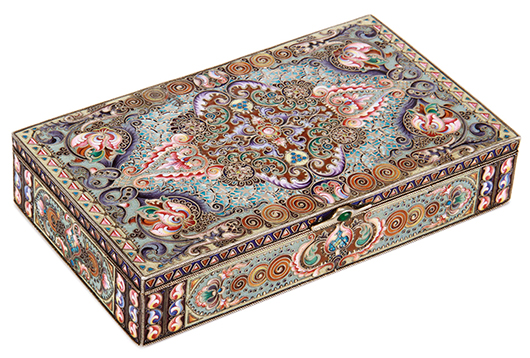 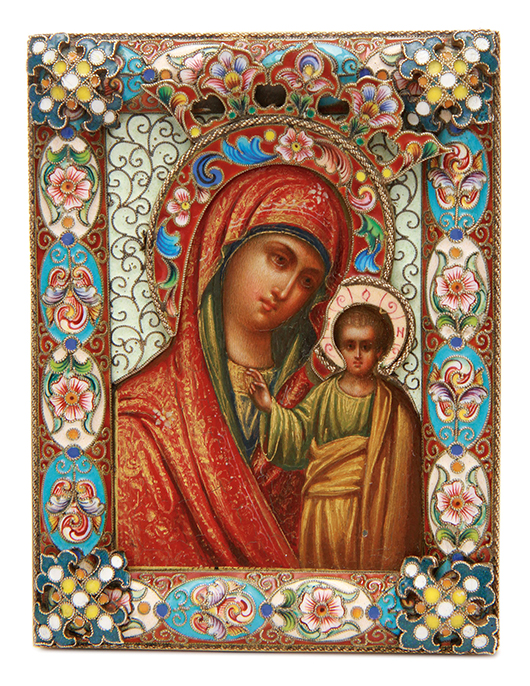 The diminutive Russian icon of the Kazan Virgin measuring just slightly over 3.5 inches and made by the firm of Feodor Ruckert, Moscow, circa 1899-1908, sold to a buyer from Moscow for $52,500. Jackson’s image. 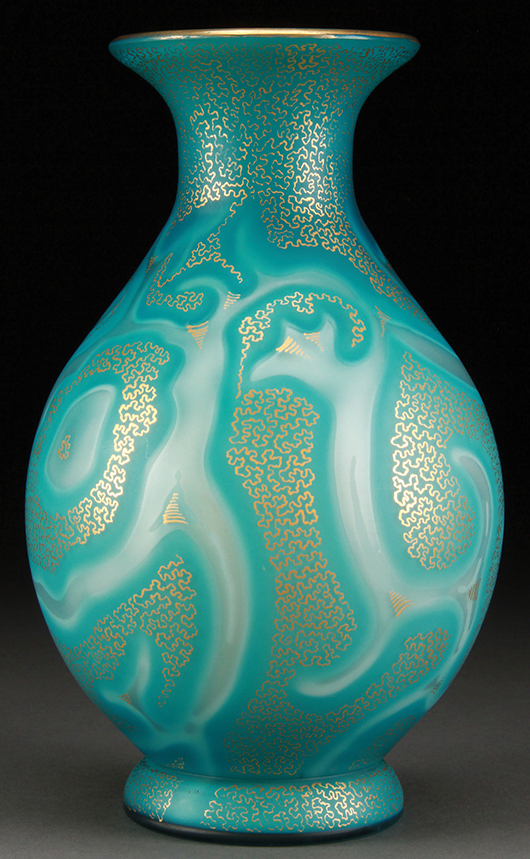 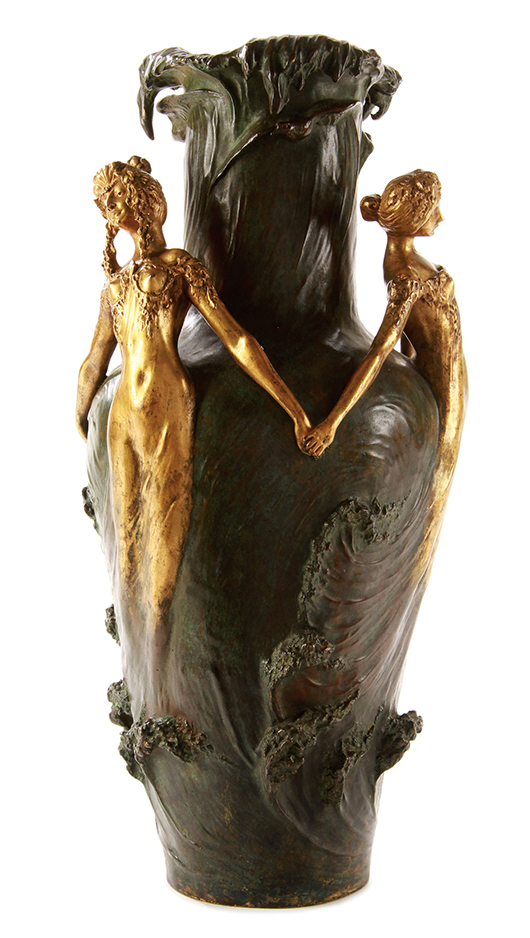 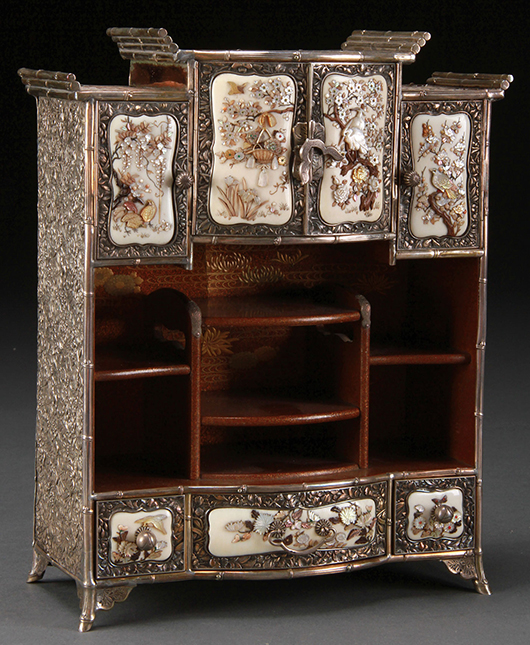 Measuring only 9.25 inches high, this Japanese silver and shibayama cabinet from the late 19th century sold for $21,250. Jackson’s image.