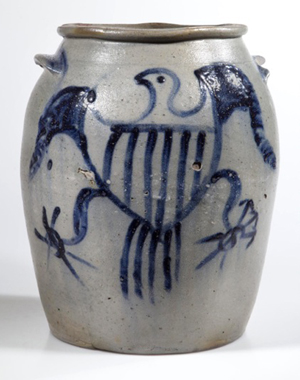 MT. CRAWFORD, Va. – In a 714-lot, nine-hour marathon session, Jeffrey S. Evans & Associates sold the entire Americana collection of the late John and Lil Palmer of Purcellville, Va., to a standing-room only crowd on April 5. The Palmers, well-know collectors, were killed in a single-car accident last July.

The auction totaled just over $1.5 million dollars including the 15 percent buyer’s premium. Top price of the day was $74,750 paid for lot 1, a rare and important stoneware salt-glazed jar of 3-gallon size, painted in cobalt with a Federal Eagle, attributed to James Miller (active 1797-1827). Made circa 1825, in Alexandria, Va., or Georgetown, D.C., the jar sold for over twice the $20,000-$30,000 estimate and realized a record price for pottery from the general D.C. area. The buyer was Clifton Anderson, of Lexington, Ky., the dealer who had originally discovered the jar in a West Virginia estate auction in 2002 and sold it to Woodbridge, Conn., dealers Allan and Penny Katz in 2003, who in turn sold it to the Palmers.

The Palmers’ stoneware and pottery collection was remarkable for its depth of offerings. One of the great surprise results of the auction was a salt-glazed stoneware diminutive canning jar made at the Thompson Pottery in Morgantown, W.Va., which sold for $48,875, ten times its low estimate. Palmer family members loved it, so did bidders on the phone and in the room. The bold image of a squirrel in typical profile pose, painted in cobalt blue on the body, had the saleroom abuzz. Lil Palmer had bought the piece in the mid-1980s, and it is one of a group of objects discussed in Ceramics in America 2011, in The Stoneware Years of the Thompson Pottery of Morgantown, West Virginia, an article by Richard Duez, Don Horvath and Brenda Hornsby Heindl.

Lot 293, a rare John James Trumbull Arnold oil on canvas folk art Portrait of Mary Mattingly, dated 1850, sold for $33,350, against an $8,000-$12,000 estimate. Additionally known and signed portraits by Arnold of Mattingly’s parents Ellen and Silvester, were offered at Christie’s in 1995 and there are other subjects painted by Arnold in the collections of Colonial Williamsburg. The warm, black-painted wood frame, and the soft browns and blacks on the dress make Mary’s frank expression and bright face, the rose in her hands and the white bow in her hair pop within the context of the darker background. The painting was purchased by Norma Wangel of Potomac Md., from the family, and later sold to John Dobricky of Warrenton, Va., who then sold it to the Palmers. Colonial Williamsburg was the successful bidder, against multiple competitors on the phone and in the saleroom. (Lot 293)

A rare and important painted poplar and pine closet/pie safe by Matthew S. Kahle (1800-1869) and John Henson (active 1819-after 1831), made in Lexington, Rockbridge County, Va., sold for $25,300, to the Museum of the Shenandoah Valley. The pie safe will be included in the “Safes of the Valley” exhibition at the museum, set to open May 11. With its wonderful, aged green paint and structural design by Kahle and its combined motifs of George Washington profiles, stars and urns hand-punched by Henson, it is no wonder the piece sold for far more than the $8,000-$12,000 estimate. The safe was in the article by Kurt Russ and Jeffrey S. Evans, The Kahle-Henson School of Punched-Tin Paneled Furniture, published in the 2012 edition of Chipstone’s American Furniture. The Palmers had purchased the safe from Ed and Delores Truitt of Roanoke, Va.

Another item of Southern regional interest, a rare and important fraktur made for John Kelley of Hampshire County, Va. (now West Virginia), sold for $32,200 against the $10,000-$15,000 estimate. One of a small and unusual group of mainly death records decorated with gilt lettering typical of a sign-painter, the Kelley example joins five others as being identifiable to one hand, possibly that of W.H. Jones, working actively in Winchester circa 1850.

After the auction, company president and head auctioneer Jeffrey Evans commented, “John and Lil Palmer were dear friends and their passing leaves a real void in the Virginia decorative arts collecting community. The overwhelming response to the auction and tremendous results are a testament to the Palmers’ great eye for folk art and passion for collecting.” He added, “John kept detailed notes about many of their pieces including family history as well as publication and exhibition records. This provenance was instrumental in the strong prices achieved throughout the auction. “

A full-color 198-page detailed auction catalogue is also available for this important collection. 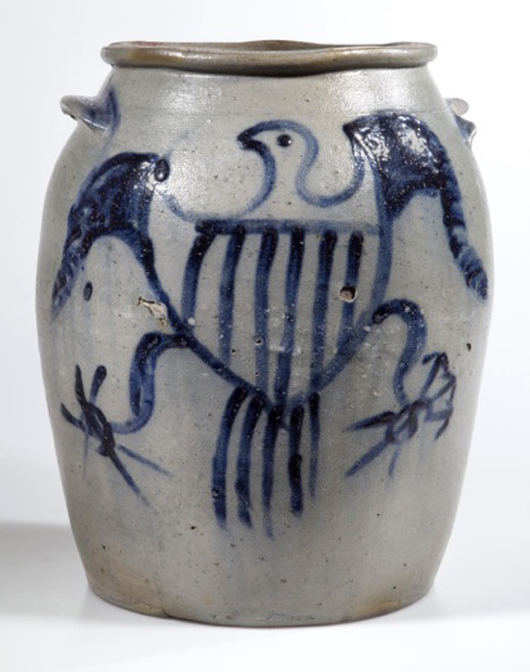 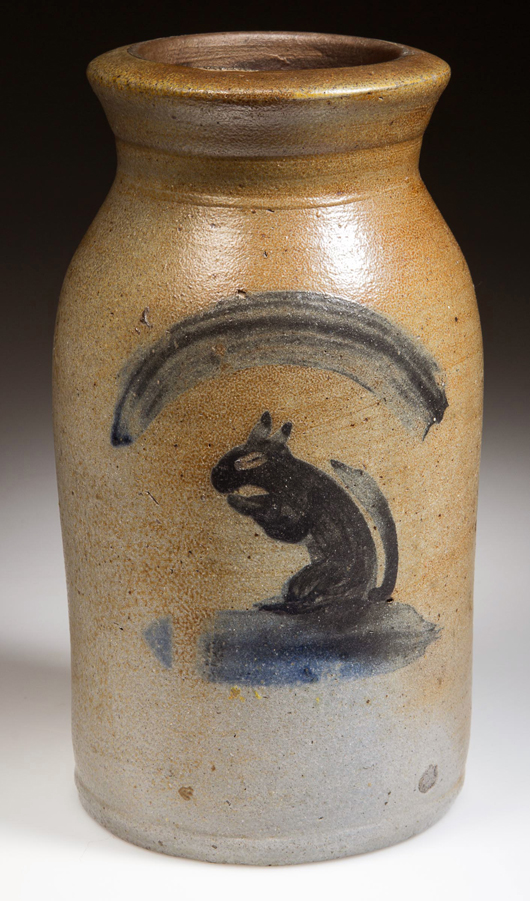 Lot 111, a salt-glazed stoneware canning jar made by Thompson Pottery in Morgantown, W.Va., sold for $48,875. The bold image of a squirrel, painted in cobalt blue on the body, had the saleroom abuzz. Jeffrey S. Evans & Associates image. 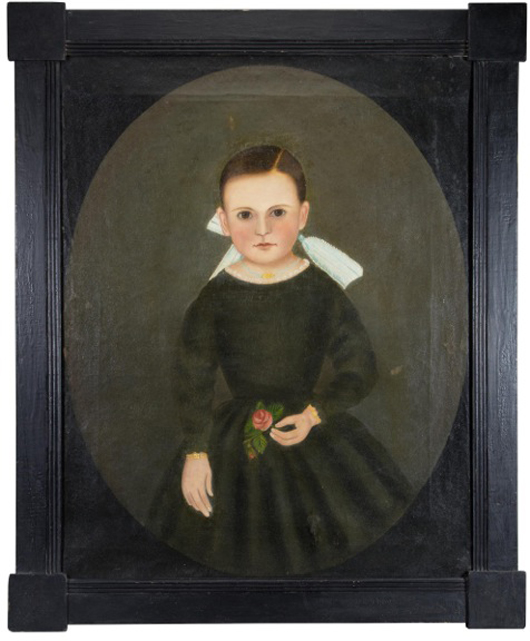 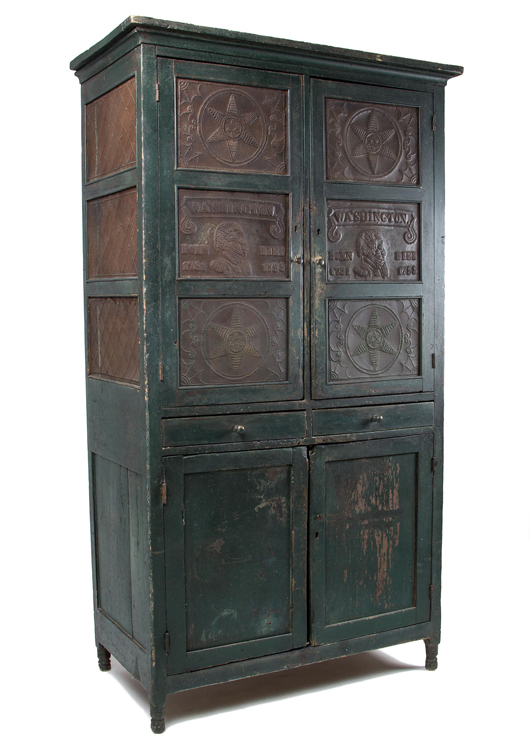 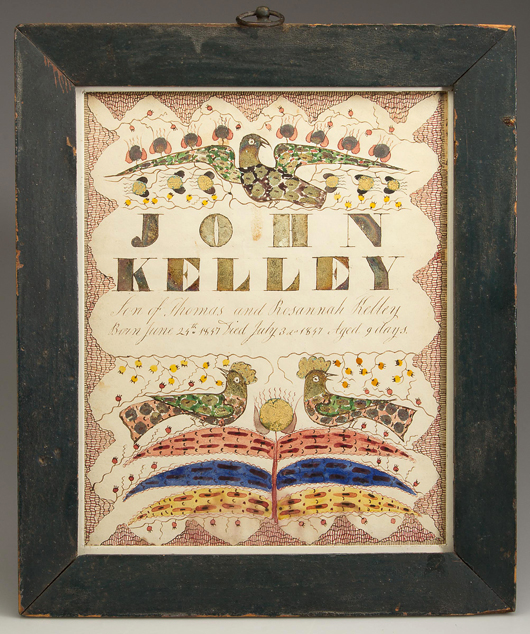