KNOXVILLE, Tenn. – An 1836 house sampler set a record price for a Tennessee sampler at auction, selling for $28,125 at the Dec. 6 Case Antiques Auction. Signed “Mary Elizabeth Collins’ work/Franklin Tennessee April 1836,” the sampler sold to a collector in the room, underbid by two other live bidders and three phone bidders, including a major East Coast sampler dealer. The price is among the highest ever paid at auction for a Southern sampler, said gallery owner John Case. Prices include the 12.5 percent buyer’s premium.

Case said the sampler relates to a group of four from Middle Tennessee that have been documented by the Tennessee Sampler Survey, an ongoing research project spearheaded by needlework authorities Janet Hasson and Jennifer Core to collect data and images on Tennessee samplers (www.tennesseesamplers.com).

The Collins sampler featured nine different stitching techniques, as well as a floral border, vase and basket of flowers, alphabets and a verse: “Tis education forms the common mind/ just as the twig is bent the tree’s inclined.”

The Collins sampler already held the auction record for a Tennessee sampler, having sold for $10,350 to M. Finkel and Daughter in June 2005 at a Devin Moisan auction in Dover, N.H. The sampler was then resold and ultimately ended up in private hands.

“Although we were intentionally conservative in our estimate – $10,000-$12,000 – we felt optimistic about how it would do because this sampler is at the top of its category,” said Case. “This economy has made the market pickier about quality and condition, but we continue to have buyers who are hungry for top-notch Southern regional objects, and are willing to pay record prices for them.”

A number of other fine Southern pieces also excelled in the sale. A folky inlaid walnut chest of drawers with pierced skirt and turned pilasters achieved $5,850 (est. $1,800-$2,200), and an inlaid walnut blanket chest with two drawers, quarter-ring turned corner molding and ogee bracket feet earned $4,500 (est. $1,800-$2,200). The early 1800s blanket chest had been documented by the Museum of Early Southern Decorative Arts and attributed to Tennessee.

“A lot of so-called ‘brown’ furniture is soft right now, but we think this shows there’s still some life in the market for outstanding pieces,” said Case.

This was Case’s largest offering of fine art. The top-selling painting was a landscape with house and figures in a field of flowers, entitled Daffodil Time, attributed to nationally regarded Tennessee impressionist Catherine Wiley (1879-1958). It sold for $12,375 to a collector in the room, underbid by an out-of-state dealer on the phone.

A folk art portrait of a woman with her dog, attributed to New England, brought $4,500, while a Spanish Colonial religious painting, attributed to the Cuzco School of Peru, went to an Internet bidder for $2,363.

Other Southern regional highlights included a red and white coverlet adorned with eagles, birds, flowers and dogs carrying flags, made by the Maryville Woolen Mill of Tennessee in the late 1800s. It made $1,800 (est. $400-500). A three-tiered wall basket in old red painted surface, which descended in a prominent African-American family, sold for $1,575 (est. $300-600). A colorful paint-decorated box from an Odd Fellows Lodge in Kentucky reached $1,463, while a set of seven mid-19th century coin silver spoons bearing the mark of Franklin, Tenn., retailer E.B. Cayce made $900.

Other notable lots included a Confederate canteen with decorative painting depicting the Bellona cannon foundry, attributed to Virginia artist John Adams Elder (1833-1895). It sold for $11,250. A Federal giltwood convex mirror with eagle competed to $3,600, while a circa 1800 Federal silver creamer with the mark of Joseph Moulton of Newburyport, Mass., reached $1,125.

“This is a good time to be buying antiques, because some outstanding pieces that have been in collections for years are finally coming on the market. And on lower end items, there are definitely some bargains – especially for people who want to furnish or decorate a home with antiques,” noted Case. “But it’s also a good time to be selling great objects. In fact, collectors who’ve invested in the best possible examples in most categories are finding that many of those pieces are yielding better returns than the stock market at this point.”

Case said that the gallery is currently accepting consignments of quality antiques and fine art, especially Southern related pieces, for its spring sale. 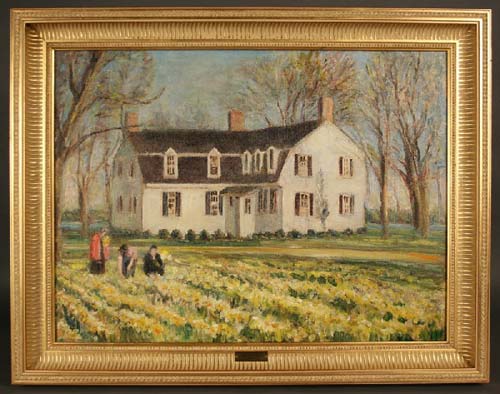 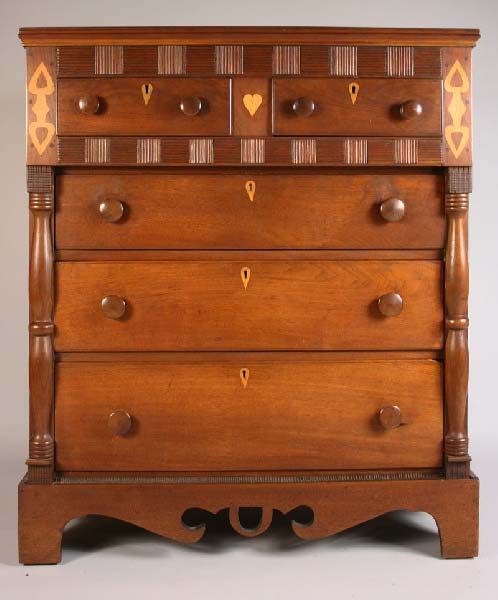 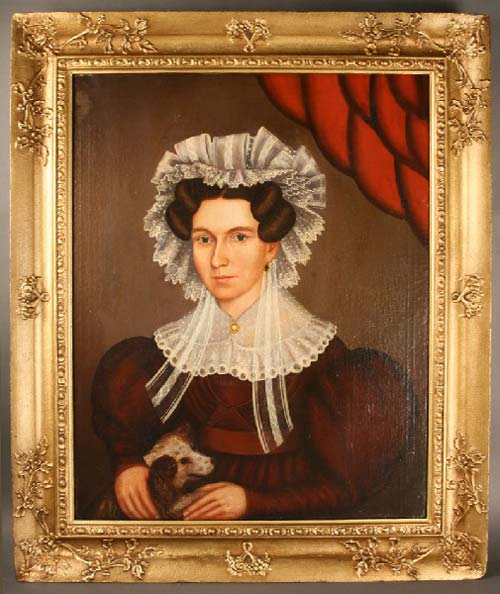 Attributed to New England, this folk art portrait of a woman with her dog made its way to Tennessee, where it sold at auction for $4,500. Image courtesy Case Antiques Auction.