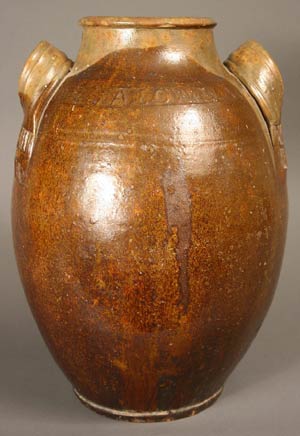 KNOXVILLE, Tenn. – A recently discovered jar by potter John Alexander Lowe set a record for Tennessee pottery at a Case Antiques Auction on Sept. 27. Estimated at $12,000-$18,000, the redware jar soared to $63,000, inclusive of 12.5 percent buyer’s premium, selling to a collector in the room.

Gallery owner John Case said that state archaeologists dug up pottery shards bearing Lowe’s name at a site in Greene County, Tenn., several years ago. However, the circa 1860 jar, with extruded handles, incised decoration at the handle attachments and stamped name circling its shoulders, is the only known intact piece of Lowe’s pottery to ever surface. The six underbidders on the Low jar included the Museum of Early Southern Decorative Arts in Winston-Salem, N.C.

Southern pottery in the sale was strong across the board. A   19th century Kentucky stoneware 5-gallon churn, stamped “J  E Wood” and “Maysville KY” in cobalt surpassed its $400-600 estimate to earn $5,175, despite a hairline crack to the rim. A southwest Virginia stoneware jar with later painting of a bird, one of only two known pieces signed by potter James Vestal, hit $1,800 (est. $500-1,000). An 8-inch stoneware jar by Knoxville potter William Grindstaff bearing his half-crescent mark brought $1,238. A redware bottle with sine wave incising attributed to southwest Virginia or east Tennessee also made $1,238. A 5-inch jug with yellow-brown alkaline glaze and pulled handle, attributed to South Carolina, circa 1850, made $844 (est. $300-500).

Other highlights of the sale included a rare 10-volume Octavo set by John J. Audubon, including The Birds of America and The Quadrupeds of North America, which sold to a private collector for $36,000. There were also four Audubon Birds of America prints from the 1835 Havell edition, which ranged in price from $1,125 to $2,363. All had some condition issues including toning and folded margins. A scarce stippled engraving entitled A Cudgelling Match Between English and French Negroes in Dominica after Agostino Brunias (Italian, 1728-1796) drew competition from European bidders before hammering down to an American collector for $1,463.

Paintings were led by an unsigned watercolor portrait on paper, dated 1836, of James H. Lowrey, a prominent Tennessee citizen. It hit $8,325. Case said it is one of the earliest known Tennessee watercolors, and it elicited bidder interest from collectors and dealers around the country. An oil on canvas of the Sam Houston schoolhouse in east Tennessee by Eleanor McAdoo Wiley (American, 1876-1977) earned $2,587 (est. $700-1,000). A small landscape by Thomas Campbell (English/Tennessee, 1834-1914) brought $2,138. A landscape with figures by English artist William Bromley (active 1835-1888) realized $1,800, and a circa 1900 acanthus and leaf-and-dart carved picture frame, bearing the label of Wilmurt and Son of New York, sold to an East Coast dealer for $2,025.

A signed east Tennessee sampler, dated 1845 and depicting a house, finished strong at $6,300.

There were bargains on furniture, with most pieces falling within or below estimate. A Tennessee cherry sugar chest with square tapered legs and some replaced molding sold within estimate at $4,500. A tall case clock with wooden works by Read and Watson of Cincinnati and cherry case attributed to Tennessee brought $3,937. A Wythe County, Va., walnut side table with elaborately carved skirt made $1,238. Southern classical and Sheraton chests of drawers brought from $400 to $900. A folky Southern two-drawer worktable with acanthus carved stiles and spiral turned legs was a star at $1,462 (est. $400-600). 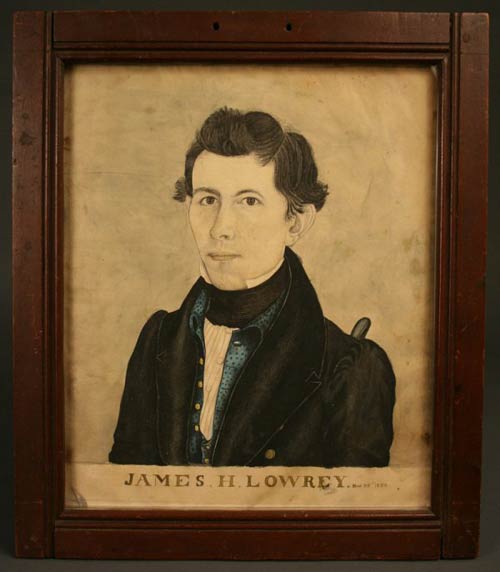 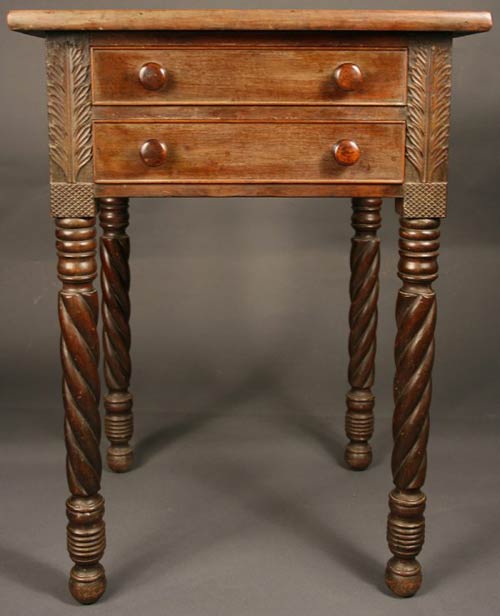 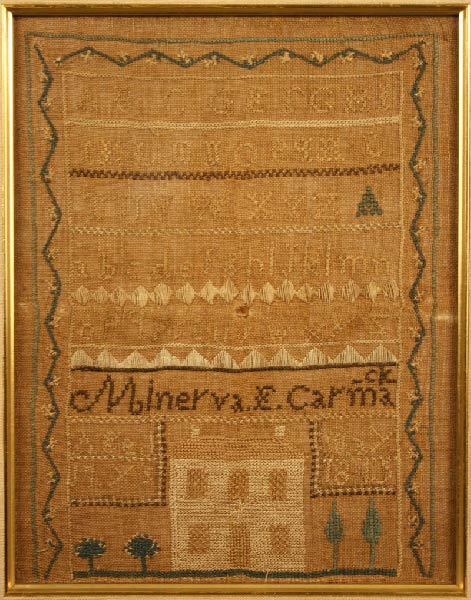