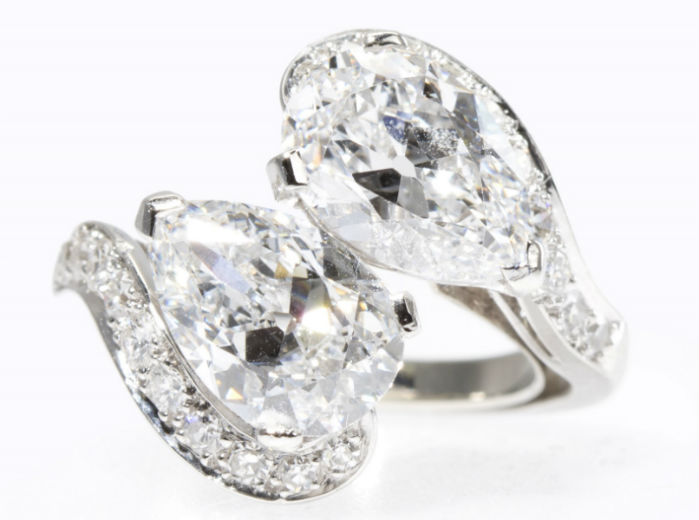 MONROVIA, Calif. – Running from 10 a.m. to 9 p.m. and comprising 767 lots, Moran’s May 23 auction was an ambitious affair, featuring four distinct cataloged sessions, including fine jewelry, studio jewelry, studio decorative art and studio fine art. The four-session May sale was a decided success, bringing in $750,500 in hammer sales and achieving an 81 percent sell-through rate across all sessions. Absentee and Internet bidding was available through LiveAuctioneers.

Moran’s opened the auction event with a fine jewelry session, which featured 137 lots consigned from private collections across Southern California. The top lot of the day was an 8.11-carat diamond in a white gold setting which was expected to bring $100,000 to $150,000. Thanks to an absentee bidder and multiple telephone buyers, the ring topped out at $108,000 (including Moran’s 20 percent buyer’s premium).

Buyers were also taken with a circa 1950s Ruser bypass ring (above) featuring two central pear-shaped diamonds each weighing in at just over 2 carats, and additionally pave-set with 20 full and single-cut diamonds; the impressive ring achieved a $42,000 price realized (estimate: $40,000 to $60,000). 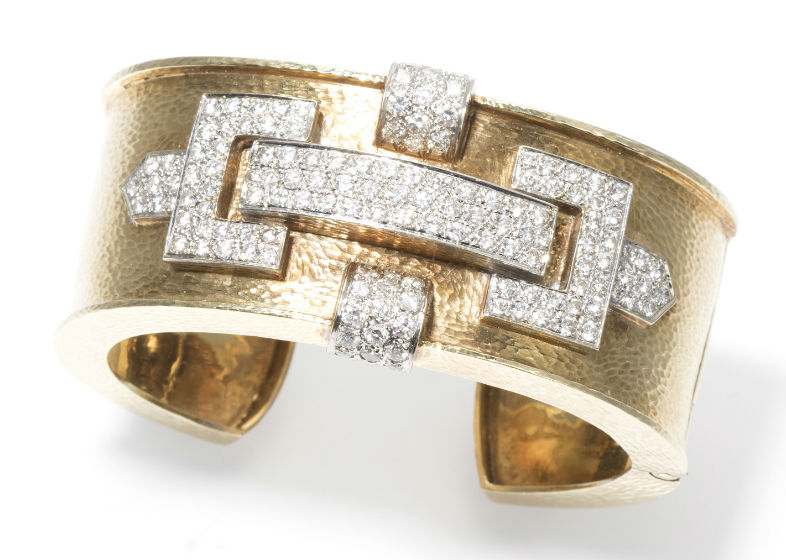 Moran’s robust Studio Jewelry Auction began at noon and featured 244 lots. The majority of lots were offered with estimates at $2,000 or below. Jewelry selections included antique, Victorian, Art Deco, retro and contemporary jewelry, luxury items and timepieces. The wide range of offerings surely helped the appeal of the session, which achieved an impressive 85 percent sell-through rate (and earned 91 percent by value). The session’s top lot was a group of 15 beaded necklaces comprising amber, resin and plastic beaded strands. Online competition was stiff for the lot, which earned $4,570 – selling to a LiveAuctioneers bidder after protracted bidding (estimate: $600 to $800).

A Georg Jensen silver and green chrysoprase necklace featuring the maker’s famous ”blossom” motif was hard-fought over by multiple online, telephone and floor bidders, pushing the selling price to $4,800 (estimate: $1,000 to $1,500). 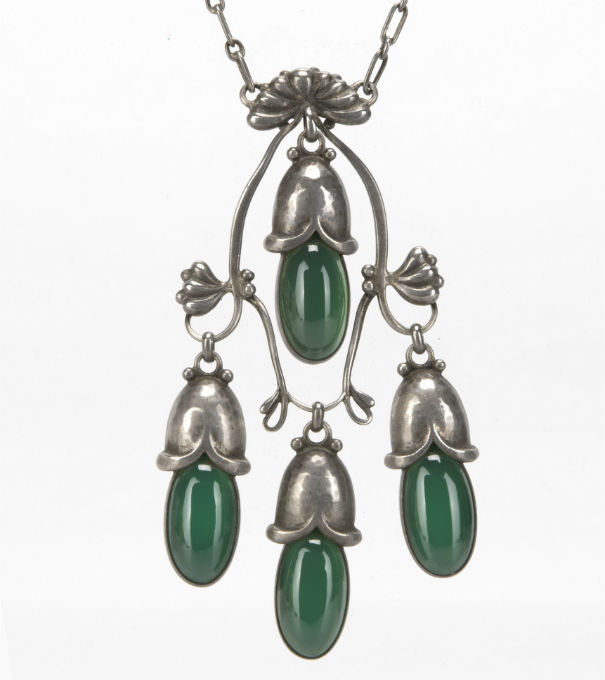 One of the standouts from Moran’s Studio Jewelry Session, this Georg Jensen silver and green chrysoprase necklace earned well over the conservative $1,000 to $1,500 estimate, realizing $4,800. John Moran Auctioneers image

An antique amethyst, demantoid garnet, diamond and seed pearl brooch dating to circa 1890 saw many bidder paddles on the auction floor fly up as soon as the lot was brought to the block. The brooch earned $2,400, well over the conservative $500 to $700 estimate. 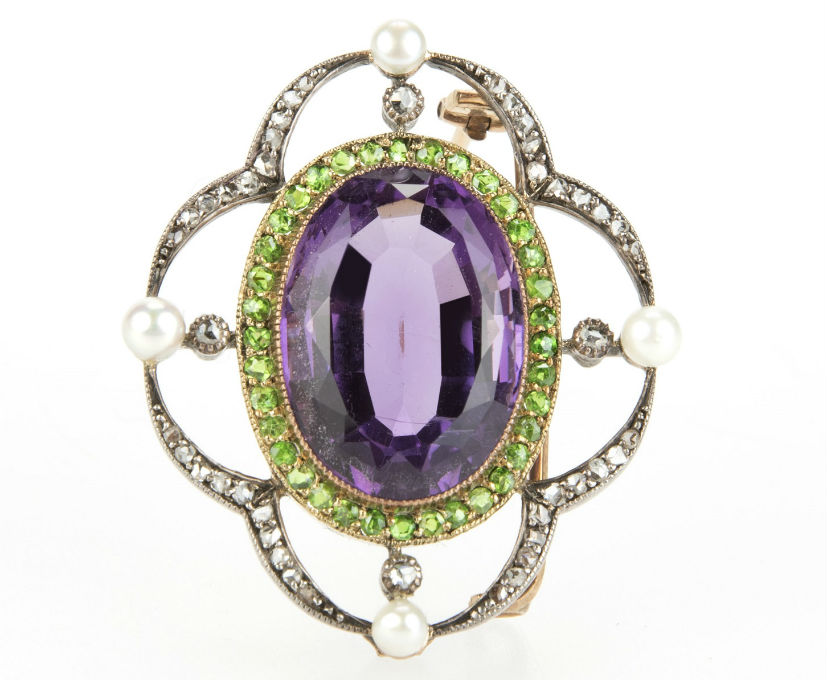 Moran’s studio decorative art session presented buyers with an eclectic mix of silver, bronze sculpture, Persian rugs, antique and contemporary art glass, which brought local collectors out in force. The top lot of the session was a handsome Western-genre bronze by Los Angeles-based sculptor Lorenzo E. Ghiglieri (b. 1931); titled Royal Battle, the bronze depicts two bull elks with antlers locked. Expected to bring $500 to $700, the sculpture appealed to local collectors, who drove the price up to its $2,700 selling price.

A pair of seldom seen Amberina candlestick lusters by Baccarat (below) in excellent condition with their original faceted crystal drops was consigned from the extensive Collection of Hector and Cuqui Sanchez, Things of Long Ago, Pico Rivera, Calif. Brought to the auction block with a $300-$500 estimate, the lusters earned $2,160 thanks to competing collectors bidding via the LiveAuctioneers platform. 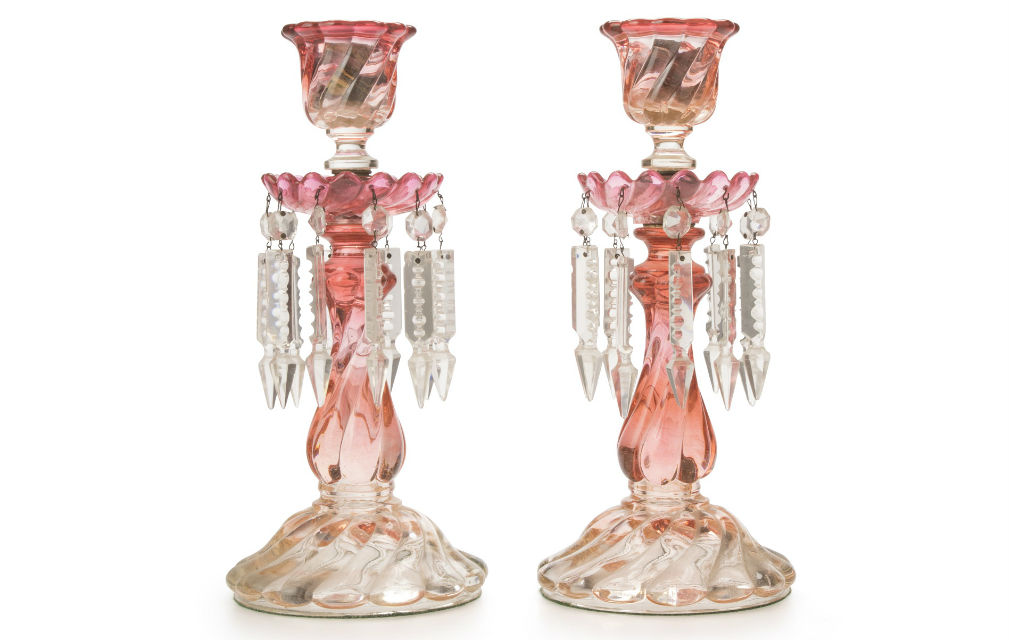 Kicking off at 6:30 p.m. and comprising nearly 200 lots, the studio fine art session earned an 82 percent sell-through rate, thanks in no small part to strong online bidder activity throughout the session. The top lots for the session comprised of a masterful 1942 work by Remie Lohse (1892-1947 American); depicting figures building a pipeline, the work set an auction record for the artist after telephone and online buyers pushed the price realized to an astounding $9,600 (estimate: $1,000-$1,500). 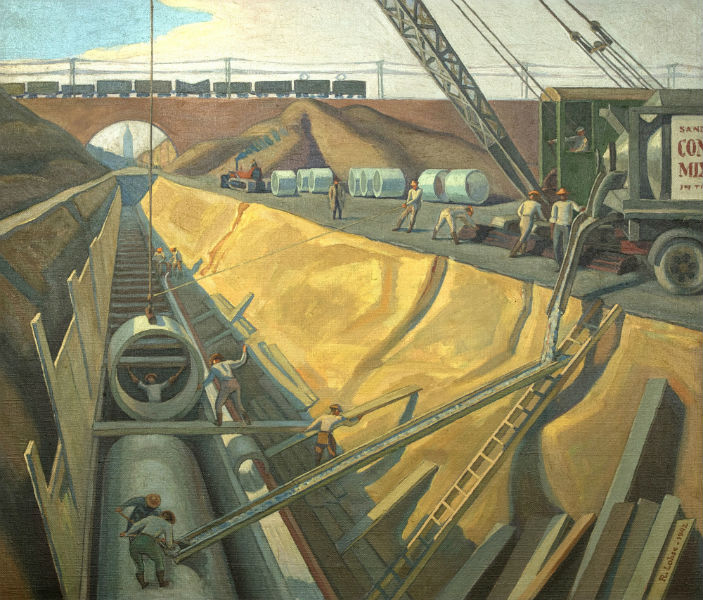 Setting a record for the artist, this 1942 oil painting by Remie Lohse (1892-1947 American) exceeded estimates, flying to a $9,600 price realized in a matter of moments. John Moran Auctioneers image 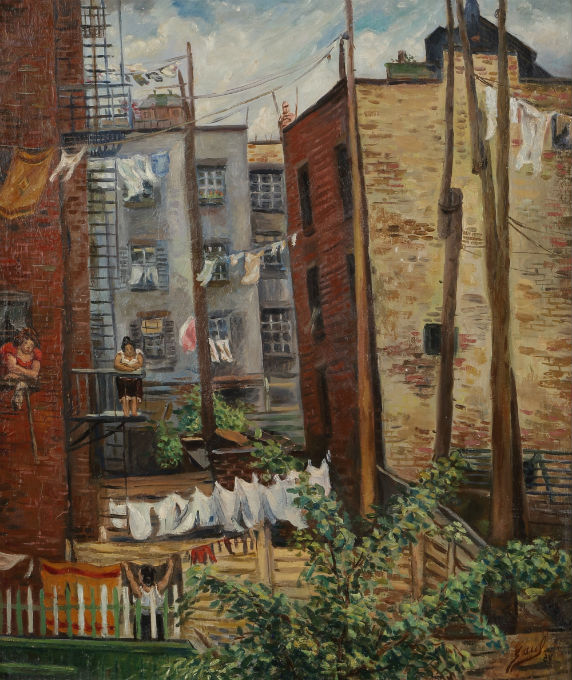