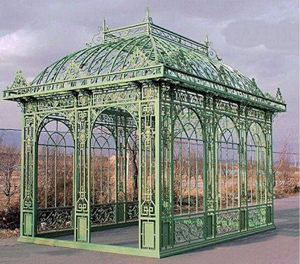 PHILADELPHIA – It has been said that when William Penn first created an urban plan for Philadelphia, he envisioned a city within a vast expanse of parkland, rife with private gardens. It seems only fitting, then, that one of the nation’s premier auctions of garden and architectural antiques should take place in the historic city.

Every April, Kamelot Auctions hosts its popular specialty event on the heels of the acclaimed Philadelphia Flower Show. It’s a natural fit, since the Kamelot sale is a “neighborhood” source for antique planters, statuary, hand-wrought iron and carved stone accent pieces, and garden bronzes. Gardening enthusiasts can purchase their exotic specimens at the flower show, then match them with beautiful antique containers in Kamelot’s Architectural Antiques & Garden Auction.
This year’s sale, held on April 18, featured more than 700 imaginatively displayed lots. The preview drew a steady crowd of people who seemed to thoroughly enjoy the way in which Kamelot owner Jeff Kamal and his staff had arranged the articles in outdoor “roomscapes.” There’s also ample elbow room inside Kamelot’s gallery, a 15,000-square-foot space in the historic Atwater-Kent Building.

An enormous and ornate cast iron and steel gazebo that sold to a private Pennsylvania estate owner formed a room of its own on the main floor, providing a romantic backdrop for several lots of carved-stone benches and garden sculpture. The sale featured outdoor furniture and various works of wood, stone, metal and glass that ran a full gamut of styles, from the stately elegance of classical figures to the raucousness of torn and weathered steel.

Unsurprisingly, on the classical end of the spectrum, carved antique marble pieces stirred the most competition. A six-foot-long carved-marble center table with slab top sold to a Parisian dealer for $11, 000. This remarkable circa-1900 table had a base composed of two beautifully carved slabs set vertically near either end, with griffin forms protruding from the edges, with tails and wings extended behind them in bas relief.

Likewise, in another strong turn for marble, a circa-1850 birdbath estimated at $1,200-$2,500 went to a private collector from Boston for $4,600.  his item displayed an understated three-part form comprised of a hexagonal base, cylindrical pedestal and a neatly square-angled basin, with a delicate bas-relief carving of grapevines and birds evenly spread over the main components like wallpaper.

Another carved-marble fountain basin from the late 18th century had lobed handles and an incised family crest. This item sold to a determined British dealer for $4,100.

The sale also featured fine Gothic carved-marble architectural elements. Many were small enough to adorn either an interior space as well as a garden landscape, while others were more imposing, such as the pair of massive carved marble caryatids each standing 73 inches high and featuring classical capitals over garland-draped female busts with haunting expressions.

Several lots of terracotta and cast-iron antiques kept paddles busy, including a pair of particularly graceful circa-1920 Galloway garden urns that sold for more than $12,000. A very good glazed and stamped circa-1930 Galloway terracotta fountain displayed a fine central figure of a boy with a fish, and brought $4,600. Another fountain, this one in lead and made around 1928, displayed a signature and a label reading “Florentine” and featured a standing woman. It sold for $4,400 against a high estimate of $1,500. Among figural terracotta pieces, standouts included a regal circa-1910 American glazed terracotta griffin, which topped $4,000.

Good antique iron garden chairs were somewhat scarce in this year’s event, but quality was not lacking in the four diminutive Regency-style cast-iron armchairs that sold for nearly $1,000, bringing the lot’s purchase price to $3,900.00.

Other iron items of particular note included a great Victorian-era Fiske aquarium (circa 1890) that brought in over $10,000.  Two French wrought-iron consoles with applied cast-iron faces forming a central design drew $3,500.

In the category of monumental metalwork, a grand pair of iron entry gates sold to a foreign estate holder from Delaware who paid $4, 100. A hugely theatrical pair of patinated-metal hanging lanterns in the Gothic style sold to a local private collector for $3,680, total. More metal and mixed-material items of note included a host of interesting potting and pastry tables, including an excellent French one in bronze and iron with marble top, decorative apron and chic tapered legs. The circa-1920 item sold to a Canadian dealer for $6,300.

Pairs of cast stone and iron animals were also popular among bidders, with one set of life-size iron dogs selling for $3,500.

Antique carved-wood mantles and bookcases rounded out the selection of impressive architectural items and included an entire circa-1910 oak library comprising 75 running feet of glass-enclosed cabinetry. It sold for $4,000. These library cabinets stood 86 inches high and were built to fit four walls with spaces for a doorway and a fireplace.

An American Victorian two-piece mantle in the Renaissance Revival style, standing 12 feet high, constructed of walnut with bronze mounts, and incorporating a huge mirror, sold to specialized dealer for $3,900.

Kamelot’s highly successful sale extended its reach to bidders worldwide through its use of LiveAuctioneers’ Internet live-bidding services. Forty-seven lots were purchased through LiveAuctioneers, including a monumental Victorian-style gazebo that made $11,685 against an estimate of $4,000-$6,000.

Visit Kamelot’s archived catalog for the April 18, 2009 sale at www.LiveAuctioneers.com. 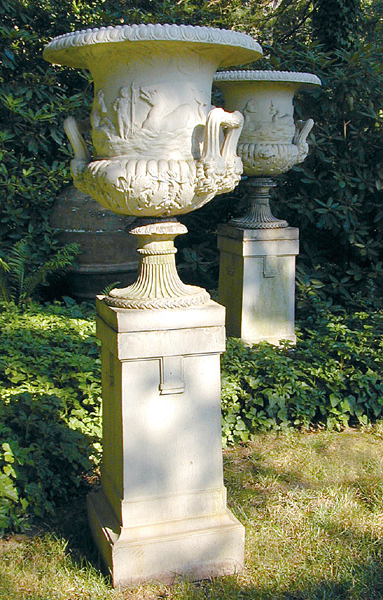 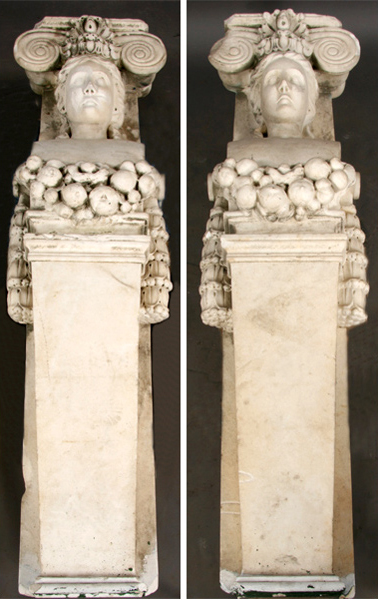 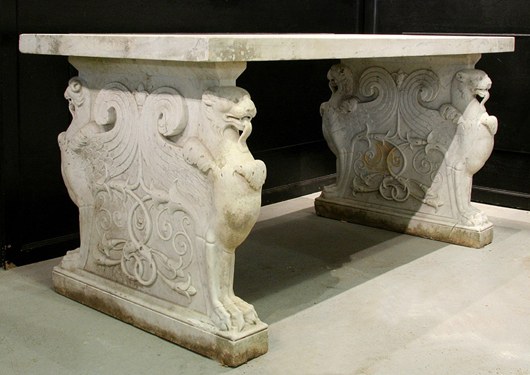 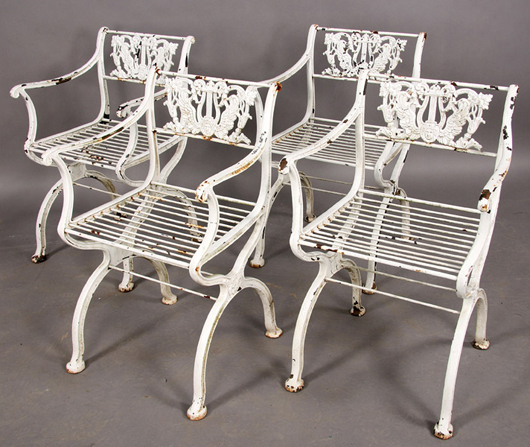 Andrew Wyeth’s final painting to be published for first time