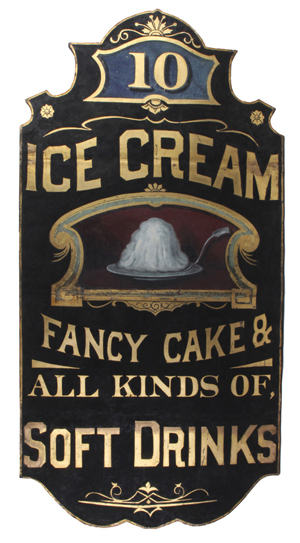 “It was like an old-fashioned sale in terms of turnout. It drew about the same size crowd we had in the very same hall 23 years ago, at our first auction in New Hope. You don’t see that sort of turnout nowadays, with so many people opting for the convenience of phone and Internet bidding. It was one heck of a crowd,” said Noel Barrett.

“In fact, I was able to point to a poster in the auction and say, ‘I sold this 23 years ago, and now it’s come back to us,’” Barrett continued. “That’s what the Bill Powell collection represented – antique toys and signs that had been off the market for decades. It was very exciting to see such a full house. All of the major buyers turned out.”

Friday’s 386-lot toy session was dominated by a British toy, an 1880s William Britain “Automatic Foot Race.” The clockwork toy featuring two quaint, cloth-dressed figures that trot around a paper-litho metal cylinder crossed the finish line at $18,400, against an estimate of $5,000-$12,000. The buyer was an American participating by phone.

Another early Britains production that finished near the top of the toy session was a Don Quixote and the Windmill Parlour Game. The scarce toy featuring a painted-wood windmill with tin blades and an armor-clad rider on horseback even retained its original box lid. The game outpaced its estimate of $2,000-$3,000 to end its run at $8,625. A Britain’s Drinking Highlander automaton garnered an identical winning bid.

An unusual 19th-century pull toy of painted tin with cast-iron wheels featured a uniformed cadet figure pulling a platform topped by a maypole with circling boy and girl figures. It finished just above its high estimate at $12,650.

Another toy that found favor with bidders was a French horse-drawn tin omnibus floor toy emblazoned with “Compagnie Generale Des Omnibus” and a point of departure and destination sign reading “Gare d l’Est – Montrouge.” Very nicely detailed and carrying 12 painted composition passenger figures, it breezed past its $2,500-$4,500 estimate to settle at $11,500.

The auction’s overall top lot was an appealing painted tin-on-wood sign believed to have come from a shop on Atlantic City’s Boardwalk. It advertised “ice cream, fancy cake and all kinds of soft drinks,” the types of treats so popular with beachgoers both a century ago and today. The gold lettering and image of a mound of ice cream being served up on a silver utensil were remarkably clean, suggesting the sign had avoided exposure to harsh elements. Against an estimate of $8,000-$12,000, the sign was bid to $46,000.

A 19th-century, full-color wood sign advertising Chas. F. Wagner Furs featured a painted cartouche with the three-quarter image of a woman wearing an ermine-collared fur vest, her hands concealed in a fur muff. Against an estimate of $15,000-$18,000, the 58-inch-tall by 29-inch-wide sign achieved $26,450.

Both a J. F. Wiessner Lager painted-tin sign with the image of a foaming pint, and a “Glasses Fitted” optician trade with a suspended pair of oversize spectacles commanded individual prices of $12,650.

An elaborately detailed watchmaker’s trade sign shaped like a pocket watch with Roman numerals brought a surprising $11,500 – more than seven times its high estimate. But even Noel Barrett didn’t expect the intense interest in a painted-wood fishing lure trade sign replicating a speckled fish, estimated at $1,500-$2,500. “There were a lot of people on the phones for that sign, and one of them ended up being the buyer at $19,550,” Barrett said.

Sometimes the type of product being advertised can be just as important as the graphics on a sign. A case in point was the lithographed cardboard sign touting Hansen’s Auto Gauntlets and illustrated with the image of a liveried driver wearing a pair of the sturdy gloves. “Sometimes automotive items can be totally surprising, because the field is so strong. I had never seen this sign before, and it had a great image,” said Barrett, commenting on the winning bid of $9,775 (est. $400-$800).

Provenance played a role in the success of an “Allegiance to No Crown” oil painting from the Greg and Molly Caron patriotic Americana collection. The artwork with provenance from the legendary Bernard Barenholtz collection ignited a bidding battle amongst six phone competitors. The painting of a sailor holding an American Flag and Victory holding a laurel wreath above his head flew past its $2,500-$3,500 estimate to sell for $8,625.

While the packed room and bank of busy phones were the source of furious bidding on many lots, the Internet was a huge presence, as well, with 1,000 registered bidders taking part through LiveAuctioneers.com. In the end, online bidders accounted for 17% of the gross and 32% of the lots sold.

Noel Barrett will conduct his next sale on Nov. 16-17, 2012, the weekend before Thanksgiving. For additional information call 1-215-297-5109 or e-mail toys@noelbarrett.com. Visit Barrett’s website at www.noelbarrett.com. 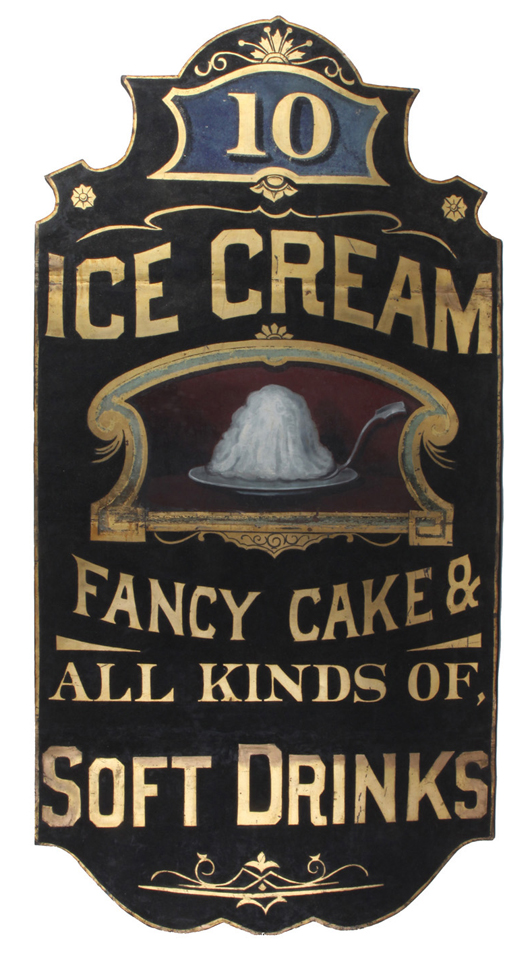 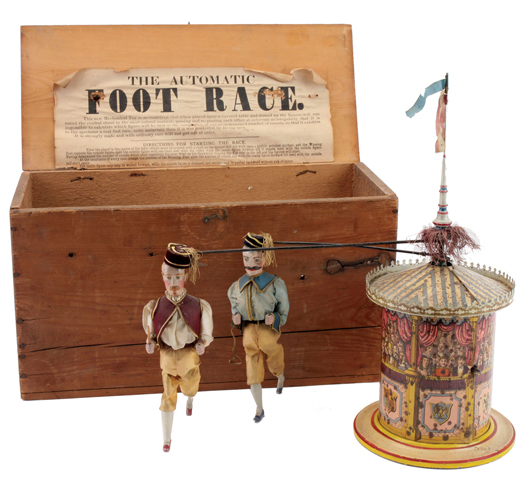 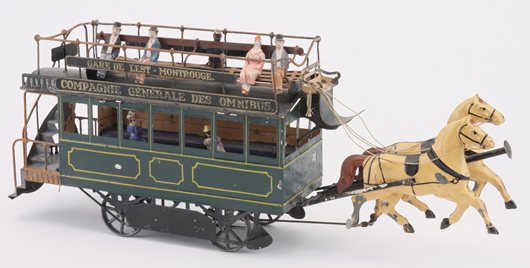 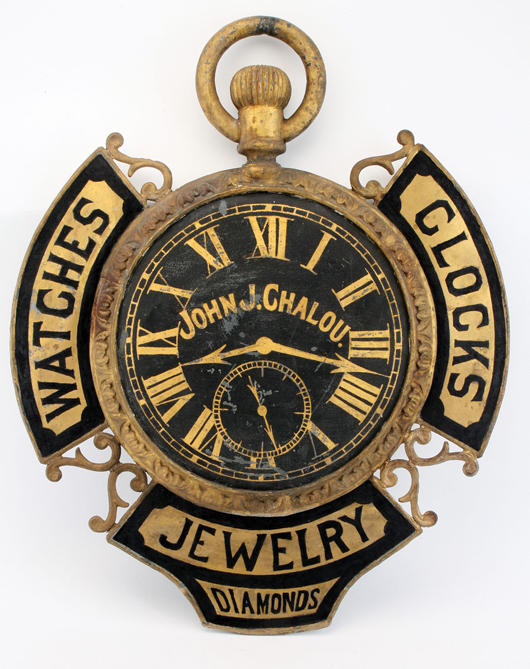 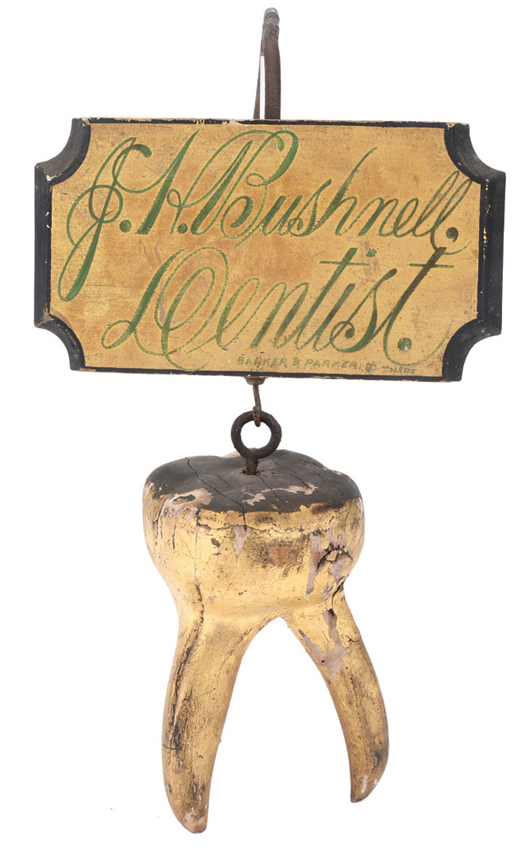 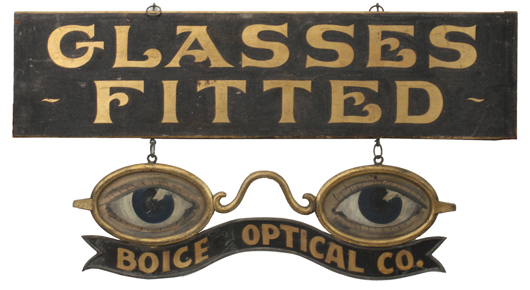 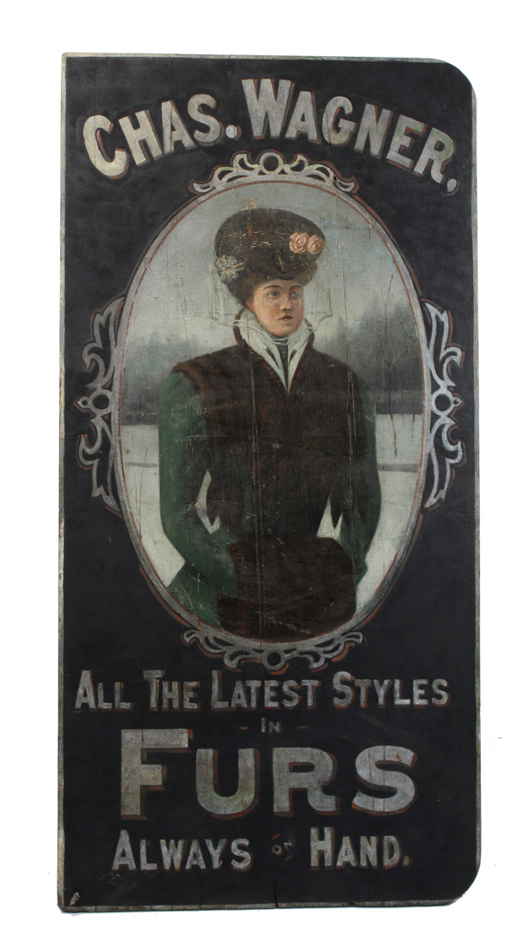 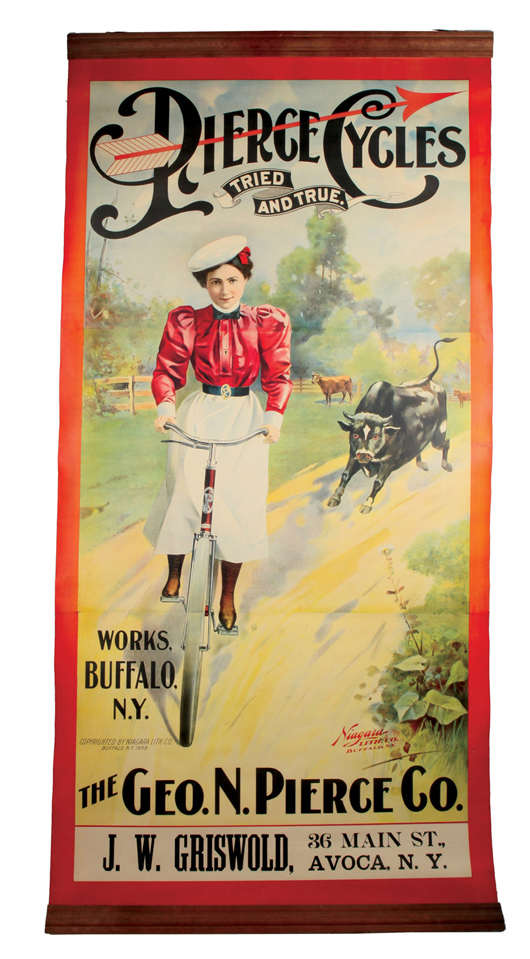 Before the Pierce-Arrow automobile, there were Pierce Cycles, as seen in this 1898 poster, 86in. tall, $11,500. Noel Barrett Auctions image.