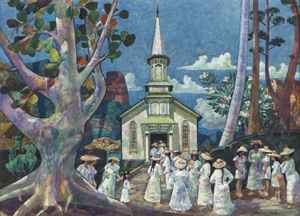 PASADENA, Calif. – Bidders seeking more affordable, smaller works by classic California and American artists at John Moran Auctioneers’ April 23 auction may have been surprised to find that the normally approachable price points for such works were rather elevated. LiveAuctioneers.com provided Internet live bidding.

Paintings estimated to bring between $1,000 and $20,000 consistently sold near or above the high end of their estimates, while larger works with higher estimates met with more selective buyers. Nevertheless, prices at Moran’s April 23 sale were good overall, and a few records were set. Overall the sale achieved a sell-through rate of 80 percent, with 550 bidders participating.

Perhaps most notably, a large watercolor by Millard Sheets, originally estimated to bring between $20,000 and $25,000, achieved the artist’s world record, selling for $54,000 (all prices include 20 percent or 22.5 percent buyer’s premium). Executed in the later part of Sheets’ career, using transparent but rich jewel tones that evoke light filtering through stained glass, Sunday Morning, Moorea depicts a group of women in their Sunday best outside a chapel.

Moran’s also achieved records for works by Arthur J. Stephens and Cornelis Botke. The Stephens, a charming cityscape titled Villa Riviera, shows a view of historic downtown Long Beach, the artist’s hometown. Facing intense competition from prospective buyers on the floor, a phone bidder won the painting for $2,280 (estimate: $800 – $1,200). The Botke, a superb etching titled Mount Teewinot, Grand Tetons, realized $4,500, which is the highest price achieved for the artist in that medium.

Colin Campbell Cooper’s painting of the San Francisco Palace of Fine Arts and reflecting pool was another runaway highlight. One of a series of studies Cooper made of the Palace of Fine Arts under different lighting conditions, this work was completed shortly after construction on the Palace was completed in 1915. The structure was built to house artworks submitted to the Panama Pacific International Exposition, and Cooper coincidentally won the gold medal in the category of oil paintings and the silver for a watercolor during the exposition. Its location hitherto unknown, this particular work resurfaced as a part of the aforementioned series when it was brought to Moran’s by a private collector. Assigned a conservative estimate of $15,000 – $25,000, it achieved a price of $90,000, with every available phone agent bidding.

Other works by familiar names in California plein air painting—Maurice Braun, Edgar Alwin Payne and Clarence Hinkle (all of whom also submitted works to the 1915 Panama Pacific Exposition—also did very well at the block. Early in the sale, a small landscape of yellow flowers in a hilly California landscape by Braun brought $6,737.50, well above the estimate of $3,000 – $5,000. Payne’s Sycamores Near Santa Paula, an excellent example of the artist’s mastery of deep-set compositions, found a buyer at $39,000 (estimate: $20,000 – $30,000). Hinkle’s Clam Hunters – Laguna, Low Tide received a good deal of interest prior to the sale date, and a number of phone lines were already reserved shortly after catalog was published. While originally estimated to bring $1,000 – $2,000, this painting went to an absentee bidder for $4,200.

Select works by New York artists also brought excellent prices. Ukrainian-born Simka Simkhovitch’s work The Ringmaster, dated 1929, five years after the artist’s immigration to the United States, is an interesting example of his thoughtful composition and the ethereal palette he favored after his arrival in this country. The estimate of $4,000 – $6,000 was handily outstripped within a few short seconds, the selling price landing at $11,637.50. Max Arthur Cohn’s charming New York Street Scene quietly gained attention prior to the sale date, shooting to a selling price of $4,500 after intense competition between phone bidders (estimate: $2,000 to $3,000). A striking terra-cotta sculpture of the head of a young African American woman by celebrated Harlem Renaissance artist William Ellsworth Artis was originally expected to bring $15,000 – $25,000 at the block, but sold for $33,000, another world auction record for Moran’s. 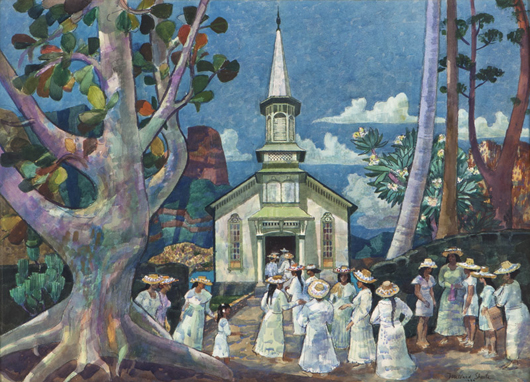 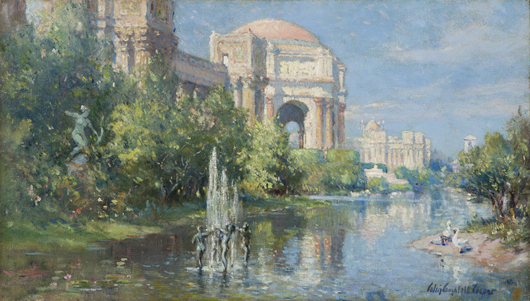 The substantial preauction interest in this painting of the San Francisco Palace of Fine Arts by Colin Campbell Cooper, one of a series set at different times of day, resulted in a final selling price of $90,000, well over the estimated $15,000 – $25,000. John Moran Auctioneers image. 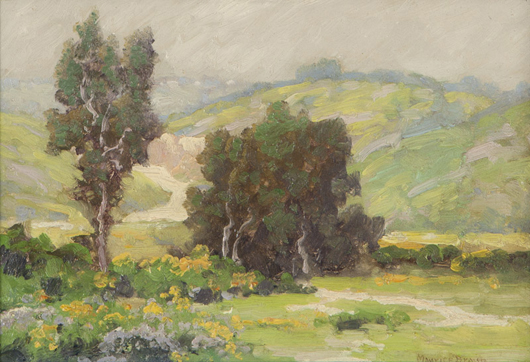 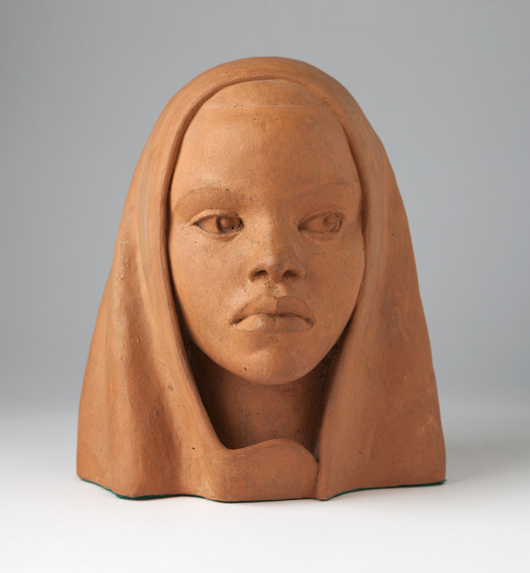 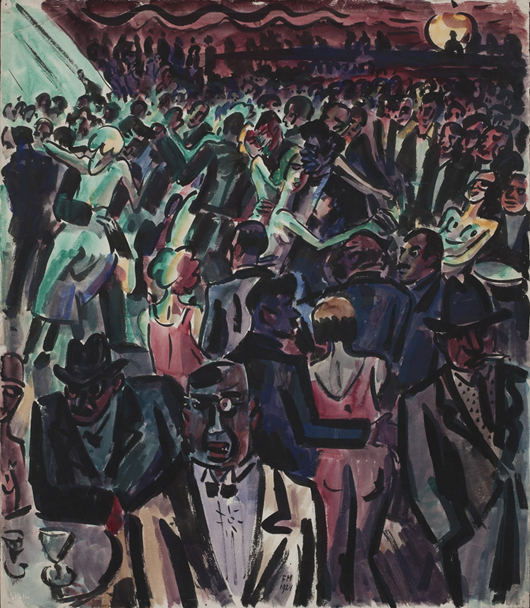 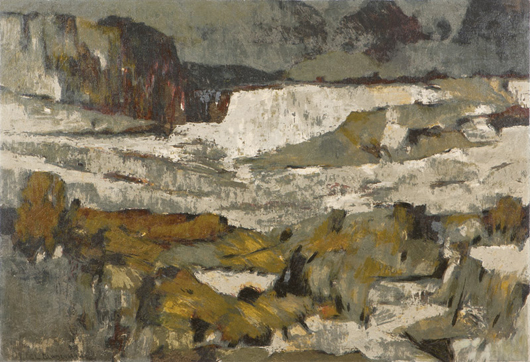 Gandhi’s handwritten will and leather sandals up for auction in Brita...