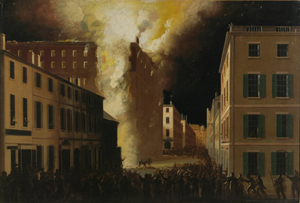 More than 87 percent of the lots sold to 165 buyers, one-third of whom were successful through the Internet. Online bidding participation was the strongest to date for Keno Auctions.

The sale featured an excellent selection of American paintings, including the dramatic Boston’s Exchange Coffee House Burning of 1818 by John Ritto Penniman (American, 1782-1841) (est. $50,000-100,000). This important picture, one of the earliest known American depictions of a fire, by one of Boston’s best-known painters of the time, was eagerly sought after by several impassioned bidders in the room and on the telephone, selling to a Massachusetts-based client for $117,800.

The sale offered many exceptional pieces of American furniture including the Massachusetts Chippendale serpentine-front chest of drawers from an Arizona collection. Bidding escalated into a spirited battle between clients on the floor, via telephone and online, bringing a remarkable $117,800 against a presale estimate of $50,000-80,000.

Another American treasure, the diminutive Queen Anne mahogany table with rectangular drop leaves (est. $15,000-30,000) sold for a strong price of $68,200, after an extended bidding frenzy. One of just a few Colonial tables in the world of this small size, it also retains much of its original finish which contributed to the final result.

The sale offered a number of charming American folk art pictures, of which the most highly desired depicted children. The winsome colorful circa 1830 pastel Portrait of a Young Child in a White Dress and Red Shoes with Peach and Dog by Deacon Robert Peckham (American, 1785-1877) brought $86,800 (est. $60,000-100,000), purchased by a New England couple.

One of the most exciting and untouched works in the sale was the Double Portrait of Wealthy Jones Winter and Sarah Marie Winter of Bath, Maine, attributed to John Brewster Jr. (American, 1766-1854), which descended directly in the family of the sitters to the consignors. Estimated at $40,000-80,000, this charming depiction brought $74,400, bought by a private Americana collector with a great appreciation for Brewster’s work and the painting’s impressive provenance. The picture hung until recently in Maine on the wall across from a portrait of their mother, Sarah Bowman, since it was painted circa 1827.

Another object that sold particularly well was the gilt copper peacock weathervane made by Jewell and Co., circa 1870, from the Collection of Joanne and Jeffrey Klein. Estimated at $5,000-8,000, and in remarkable condition, it went to a private New York collector bidding against six telephone bidders and several people in the room achieving a final price of $39,600.

There was great interest in the delightful group of six carved Alice in Wonderland figures signed and dated 1925 by Augustus Davies (American 1867-1951) that fetched a stunning $39,680 (est. $5,000-8,000). The set of figures is composed of the Mad Hatter, Frog Footman, Duchess, March Hare, Alice and White Rabbit. The bases of Alice, the Duchess, March Hare and White Rabbit are signed and dated by the artist. There was a slew of bidding on the floor, on the telephones and online, but a private collector in the room patiently waited out the frenzy and finally won the lot.

And finally, true love triumphed (at the auction) when a young man purchased the delicate platinum and gold three-stone diamond ring, circa 1890, for $17,360 (est. $6,000-8,000) for his beloved; for whom he intends to propose to soon after taking possession of this symbol of everlasting love.

Leigh Keno, president of Keno Auctions, commented: “We are very pleased with today’s result, especially for the prices achieved for important works such as the serpentine chest of drawers which hammered at an outstanding $117,800, inspiring a good deal of competition between collectors. We were also delighted to see arresting works such as John Ritto Penniman’s Boston’s Exchange Coffee House Burning of 1818 that sold for $117,800, coming in far over the high estimate. Folk Art continues to be an increasingly strong collecting area and we are thrilled with the results of Peckham’s Portrait of a Young Child, the Brewster Double Portrait of Wealthy and Sarah Winter as well as the handsome gilt copper peacock weathervane. We are impressed by the caliber of new and established clients in the sale who bid decisively on the best examples of fine and decorative arts.”

Keno Auctions next sale of Impressionist, Modern & Contemporary Art is scheduled for June 11 in New York.

All prices include the buyer’s premium, which is 24 percent of the hammer price. 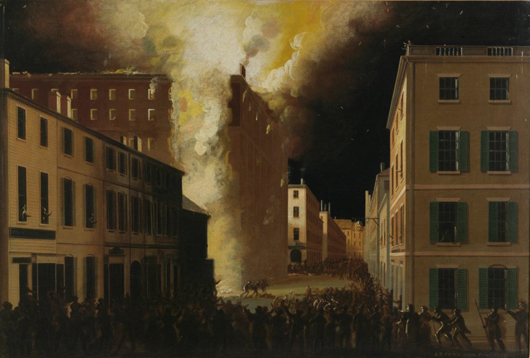 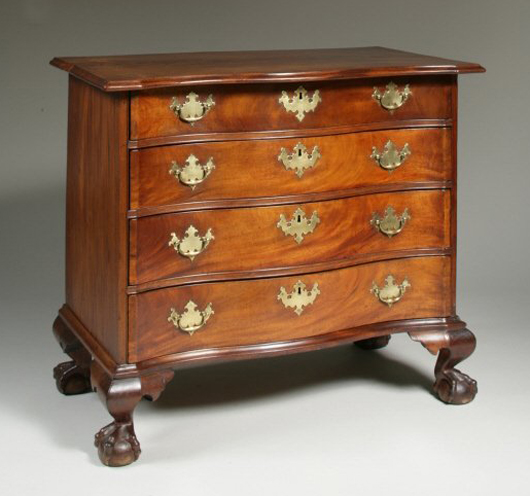 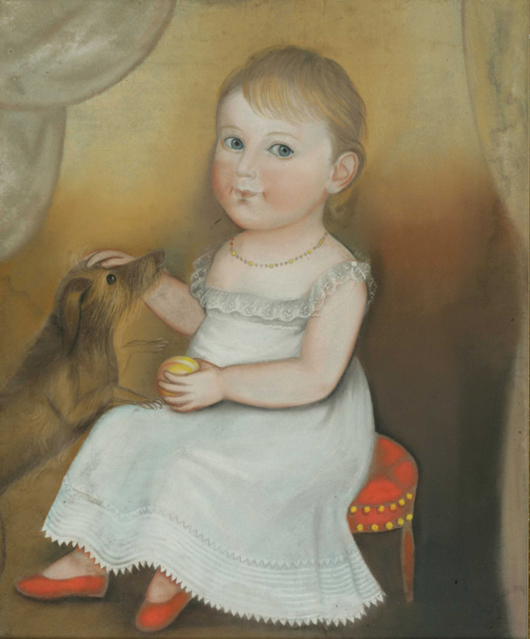 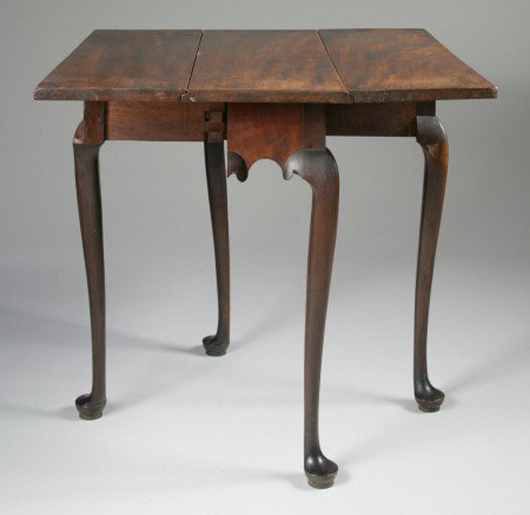 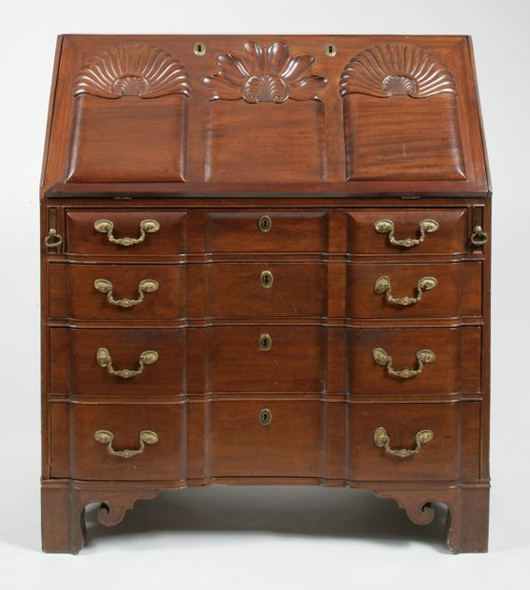 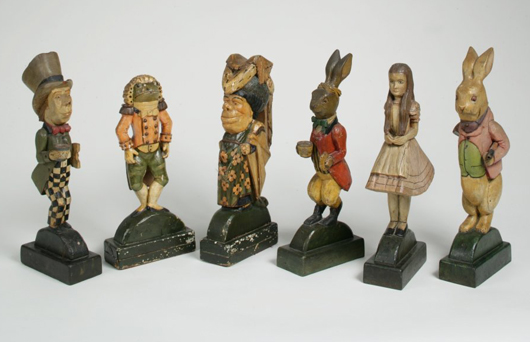 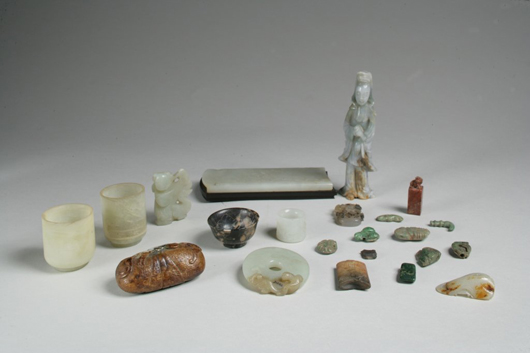 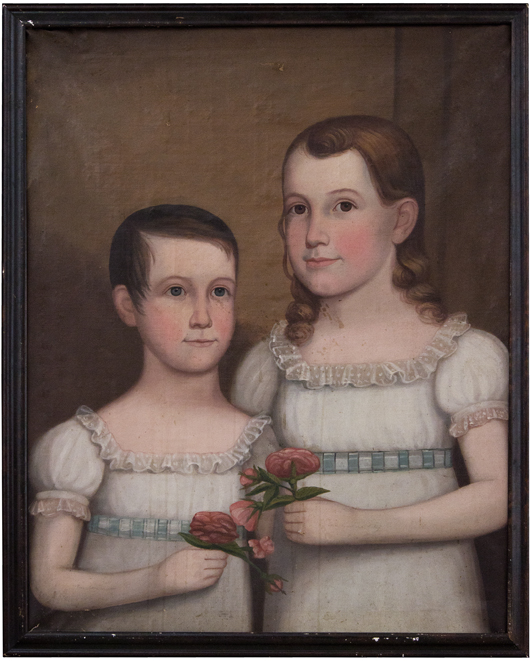 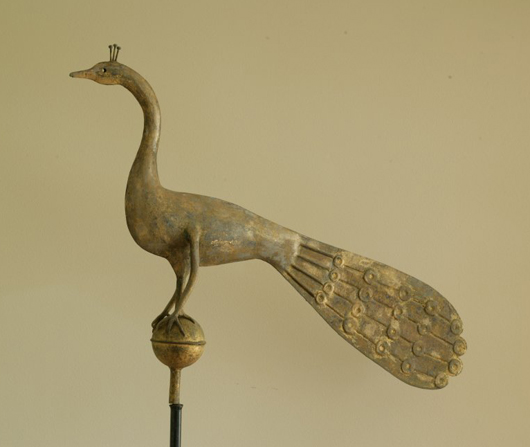