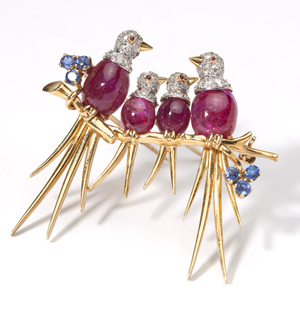 These branch-perched birds by Van Cleef & Arpels had hearts aflutter with their adorable styling and quality of craftsmanship, the brooch soared to a final selling price of $26,400 (estimate: $5,000- $7,000). John Moran Auctioneers image

ALTADENA, Calif. – In their final auction event of 2014, John Moran Auctioneers offered over 250 lots of fresh-to-the-market jewelry and luxury items to buyers on Dec. 9. With every piece carefully culled from private collection and estates, the majority of which were Southern California-based, the sale featured pieces with approachable price points of a few hundred dollars up through a fancy yellow diamond estimated to earn a quarter of a million dollars at the high estimate.

The sale was well-attended, with nearly every available chair at John Moran’s headquarters occupied by eager bidders. Online bidding was provided by LiveAuctioneers.com.

The aforementioned gold, enamel and micro-mosaic pendants, for example, were estimated to earn $600 to $800, but flew to a final price of $6,000 due in no small part to voracious online underbidding. Overall, big earners for the evening were designer pieces and diamonds of all shapes and sizes, as well as a few unexpected crowd favorites.

A number of high-karat gold pieces were on offer at Tuesday’s auction, including a number of Indian necklaces and bracelets. A high-karat gold and flat fan single-row Kasu mala necklace marked “Jaya Bangalore Luckshmi” was diligently sought by a floor bidder who had to compete with a number of online bidders to take the piece home. The selling price was $10,200, including the 20 percent buyer’s premium (estimate: $6,500 to $7,500). A different floor bidder snapped up the following lot, consisting of two Indian 22K gold serpentine chains and a matching bracelet, beating out multiple absentee bids in the process. The lot sold for an impressive $19,200, within the $15,000-$20,000 estimate.

Jade and coral pieces also appeared to be in high demand as the sale progressed. A multistrand tubular coral beaded torsade necklace, set with Indian 18K gold beads throughout, was estimated to earn $1,500-$2,000 at the block. The vibrantly colored piece caused a stir among online bidders, shooting to a selling price of $2,700 in mere moments after the auctioneer opened the lot. Shortly after, a graduated bead necklace of translucent mottled green jadeite jade, expected to bring between $3,000 and $5,000, jumped to $7,200 after an enamored telephone bidder jumped into the fray. An intriguing jadeite toggle, finely hand-carved with a parrot clutching a peanut in its claws and a string of beads in its beak was assigned an estimate of $5,000-$7,000, and performed respectably with a final selling price of $6,000.

Somewhat surprisingly, given the relatively soft market for pearls over recent years, a few lots featuring natural pearls did quite well at Moran’s Dec. 9 sale. Late in the catalog, a group of cultured and natural pearl jewelry assigned a conservative $800-$1,200 estimate found a new home for twice the expected high, while a strand of slightly graduated natural pearls earned an impressive $11,400 (estimate: $1,200 to $1,800).

Less surprisingly, diamonds of all shapes and sizes sparkled throughout the catalog, achieving competitive prices. One of the most highly anticipated lots, a natural fancy yellow diamond of 12.83 carats within a marquise- and full-cut diamond-studded platinum setting carried an estimate of $200,000-$250,000, with a floor bidder becoming the successful high bidder for a price square within that bracket: $228,000. A diamond and platinum ring centering an emerald-cut 3.05 carat diamond by celebrated designer Michael Beaudry, accompanied by a framed watercolor concept rendering, earned $36,000, after another floor bidder outbid a large number of absentee bids submitted prior to the auction (estimate: $18,000-$25,000). Carrying an estimate of $90,000-$120,000, a pear-shape diamond measuring 6.23 carats and mounted in platinum also exceeded expectations, selling for $180,000. A platinum and old European-cut diamond ring, a lot combining two Moran auction crowd favorites: diamonds and the Art Deco taste, did well, finding a buyer for $13,200 (estimate: $6,000-$8,000).

Silverhorn was a big name in the auction offerings. Pieces by the Santa Barbara maker attracted a lot of interest with sleek modern design and interesting stones. A large turquoise ring in a pierced 18K yellow gold setting was assigned an estimate of $1,000-$1,500, and the piece sold for $2,040. Shortly thereafter, a triangular Mexican fire opal cabochon ring in 18K hammered gold, estimated to earn $1,000-$1500, sold for $1,440. The big-ticket win for Silverhorn jewelry, however, went to an online buyer who had to compete with multiple parties bidding from the sales floor for a sleek coral cabochon in an 18K gold ring setting; the bids came through in rapid succession, landing on a $4,000 selling price (estimate: $1,000-$1,500).

Always a popular maker, pieces from Tiffany & Co. also inspired competitive bidding. During previews, a number of bidders were seen eyeing a Tiffany enamel and diamond stag beetle brooch. The realistically modeled statement piece earned a respectable $3,900 price tag, just over the $2,000-$3,000 estimate. On offer for those with tastes skewing more towards the botanical than the entomological, a signed hammered hand-made 20K gold rose-form brooch set with six full-cut diamonds carried an estimate of $1,200-$1,800, selling for $5,700. Shortly thereafter, a sterling silver box inset to the cover with a mesmerizing rectangular swath of iridescent blue art glass found a buyer for $1,800.

A large number of luxury men’s watches found new homes at Moran’s Dec. 9 sale, including pieces by Patek Philippe, Rolex, Corum, Baume & Mercier and Le Coultre. Early in the auction, a Patek Philippe 18K yellow gold rectangular case wristwatch went up at the block with a $6,000-$9,000 estimate, and came away with a price of $14,400, thanks to online bidder activity. An interesting Corum 1904 wristwatch with an American gold $20 Liberty coin as its face also sold for $3,900 (estimate: $1,500-$2,000). Late in the auction, an early Rolex covered-dial wristwatch with a .935 silver case and lid perked up buyers with its undeniable character. The watch earned $1,800 at the auction block (estimate: $1,000-$1,500). 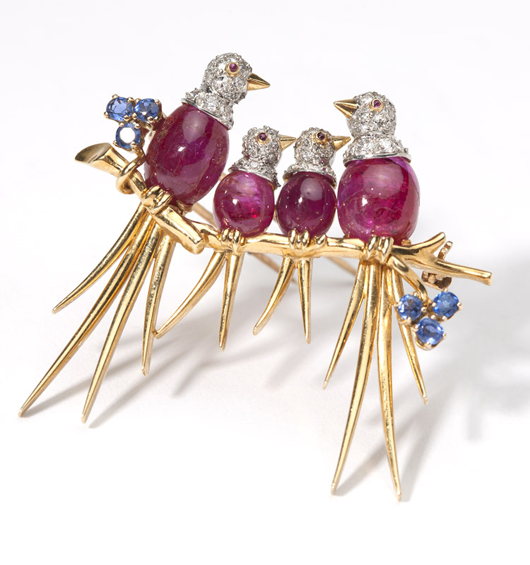 These branch-perched birds by Van Cleef & Arpels had hearts aflutter with their adorable styling and quality of craftsmanship, the brooch soared to a final selling price of $26,400 (estimate: $5,000- $7,000). John Moran Auctioneers image 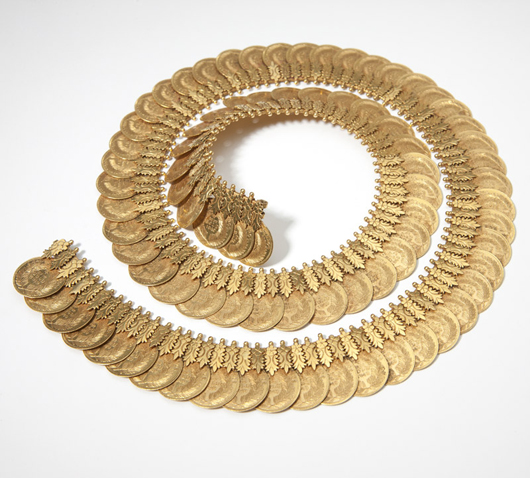 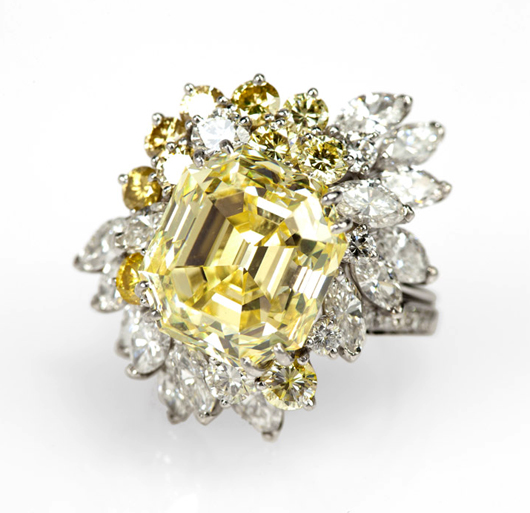 Selling for $228,000, within the $200,000 to $250,000 estimate, this platinum ring centering a 12.82 natural fancy yellow rectangular step-cut diamond was purchased by a floor bidder who had to compete with a number of hopeful absentee bidders. John Moran Auctioneers image 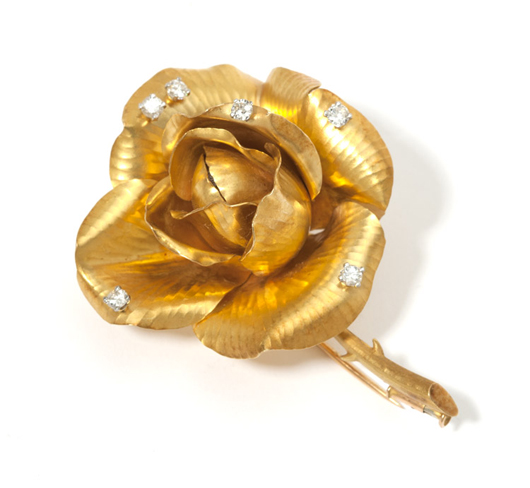 This hand-hammered rose brooch by iconic maker Tiffany & Co. was initially estimated to earn $1,200 to $1,800, but outgrew its estimate with a $5,700 selling price. John Moran Auctioneers image 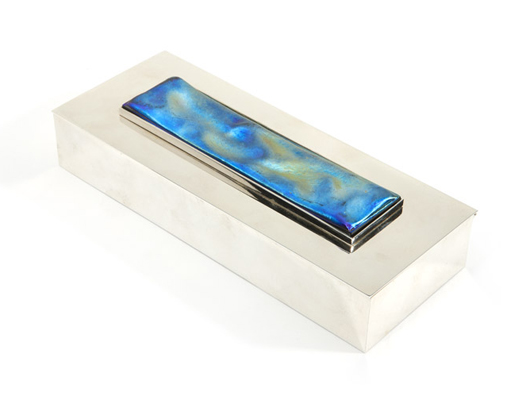 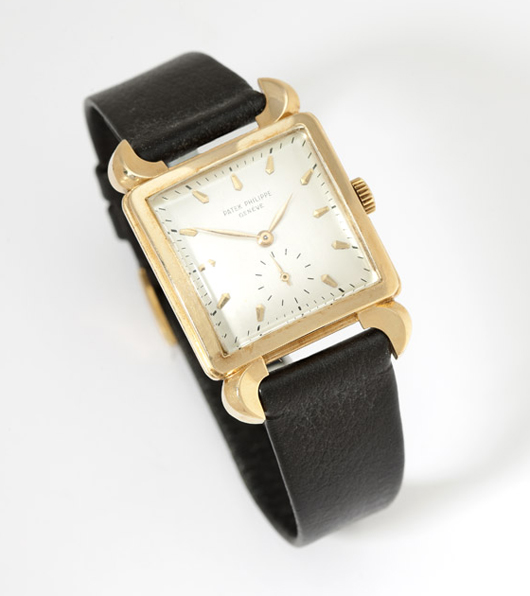