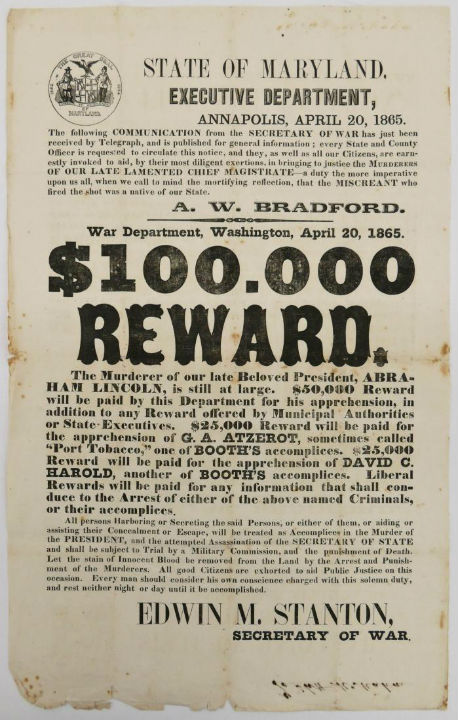 One of approximately 50 surviving examples of a Lincoln assassination reward poster issued in 1865. It sold for $36,300 to a LiveAuctioneers bidder. MBA Seattle Auction image

SEATTLE – An original 1865 wanted poster advertising a huge reward for the capture of President Abraham Lincoln’s assassin, John Wilkes Booth, sold at auction for $36,300 at MBA Seattle on July 20. Estimated at $10,000-$20,000, it sold through LiveAuctioneers.com for nearly double that amount.

Originally distributed by all existing states to their counties following a telegraphic order from Edwin M. Stanton, Secretary of War, broadsides of this type announced that $50,000 would be paid for Booth’s apprehension and $25,000 each for G.A. Atzerot and David C. Harold.

One of approximately 50 known examples to have survived the last 152 years, the broadside in MBA Seattle’s sale was among those distributed on April 20, 1865 by the State of Maryland’s Executive Department in Annapolis. It may be the only one of its type issued by Maryland that is still in existence.

Michael Mroczek, owner of MBA Seattle, had full provenance linking the broadside to the sheriff to whom it was originally given in 1865. It came directly from a family that has owned it for several successive generations by descent.

The Maryland connection was significant, Mroczek said. “That’s the state Booth ran to after the assassination. He was captured six days after this poster was issued.”

The broadside measures 19.25 by 12 inches and is inscribed in ink on verso: “To Shff McMahan.” McMahan held several government positions during his career, including postmaster of Fowling Creek, Caroline County, Md., in 1862; and postmaster of New Hope, Caroline County, Md., in 1869. Documents verifying McMahan’s employment were included in the group lot containing the reward poster.

The price includes the buyer’s premium.