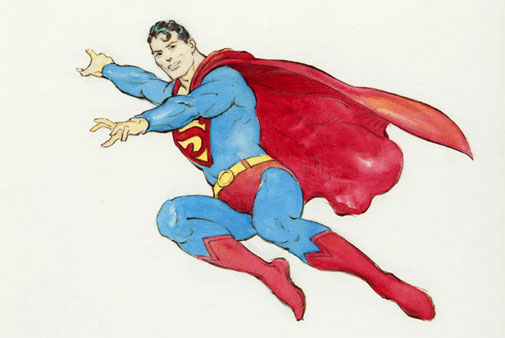 YORK, Pa. – Premium-quality merchandise and strong competition were the winning combination that drove Hake’s Americana & Collectibles Auction to a $1.1 million finish on November 12, 2015. The online double-header – with two days of feverish bidding divided by an intermission day – featured some of the finest examples of rare pop culture items ever to appear at auction.

“Although the term ‘pop culture’ is ubiquitous these days, it has always been in Hake’s vocabulary, and in our 48 years of operation, we’ve never assembled a more impressive group of collectibles falling under that heading than what was organized for this sale,” said Alex Winter, President of Hake’s. “The response from our bidders exceeded even our own lofty expectations, and we achieved some truly staggering prices on many pieces.”

Superman soared to the number-one slot when Frank Frazetta’s (American, 1928-2010) original specialty artwork depicting the Man of Steel (shown above) sold for $35,420, a price well beyond the estimate of $10,000 to $20,000. The professionally matted 15½ by 17½-inch watercolor of an airborne Superman was one of many choice auction items that came to Hake’s from the late Ken “Franco” Toscanini’s collection.

One of the predicted stars of the November sale was a framed and matted original album cover for the Beatles’ 1964 studio album A Hard Day’s Night, autographed on verso by all four members of the legendary English band. Multiple-autographed Beatles material is extraordinarily rare, and in the case of the LP in Hake’s sale, it came with not only a Hake’s Certificate of Authenticity (COA) but also a Letter of Authenticity from Frank Caiazzo, the world’s top authority on Beatles handwriting. The signed album closed at $27,781. 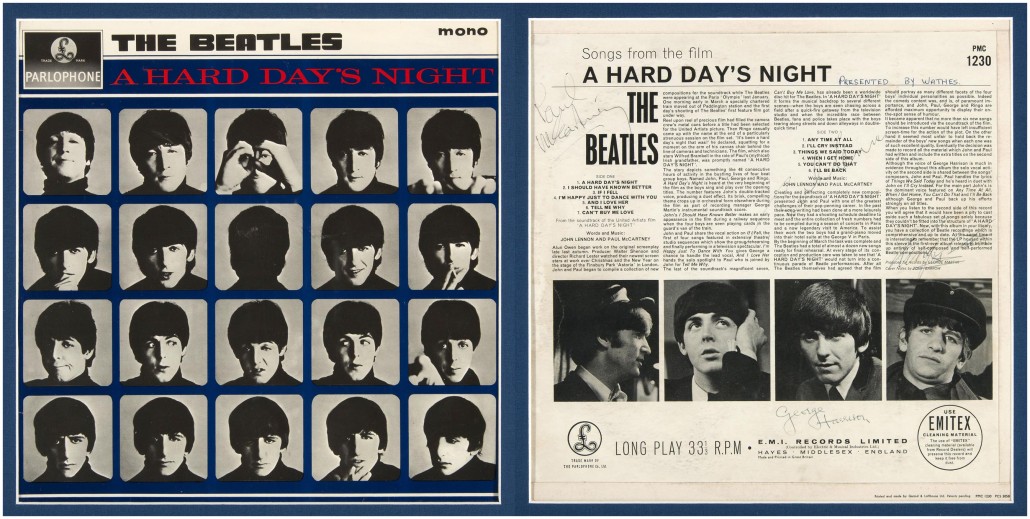 Superman also claimed third place in the auction when a rare Superman linen-mounted one-sheet for the 1948 movie serial starring Kirk Alyn (shown below) realized $16,761. It came from the Toscanini collection, as did a colorfully pictorial shipping carton that originally contained 20 boxes of Bowman’s Superman 1-Cent Super Bubble Gum and Picture Card sets. One of only two examples known to Hake’s, it landed at $12,525. Other Superman highlights included: a die-cut promotional folder in the shape of the superhero, $9,260; a circa-1949 “Superman Official Junior Suspenders” display box with contents, $8,625; and a rare Superman Cut-Outs book, $7,590. 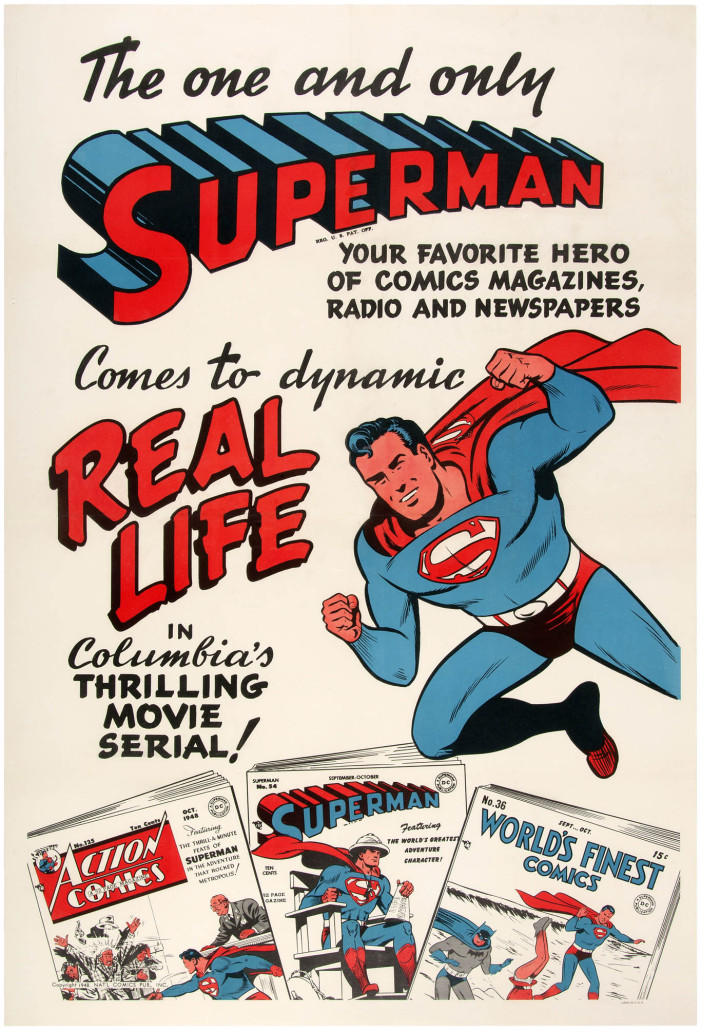 A happy unbirthday party was declared when an Alice in Wonderland Mad Hatter Regal China prototype teapot decimated its $1,000-$2,000 estimate to sell for an astonishing $15,306. The heavily glazed vessel was cleverly designed so that the zany, top-hatted character’s body shape followed the teapot’s classical bulbous form. 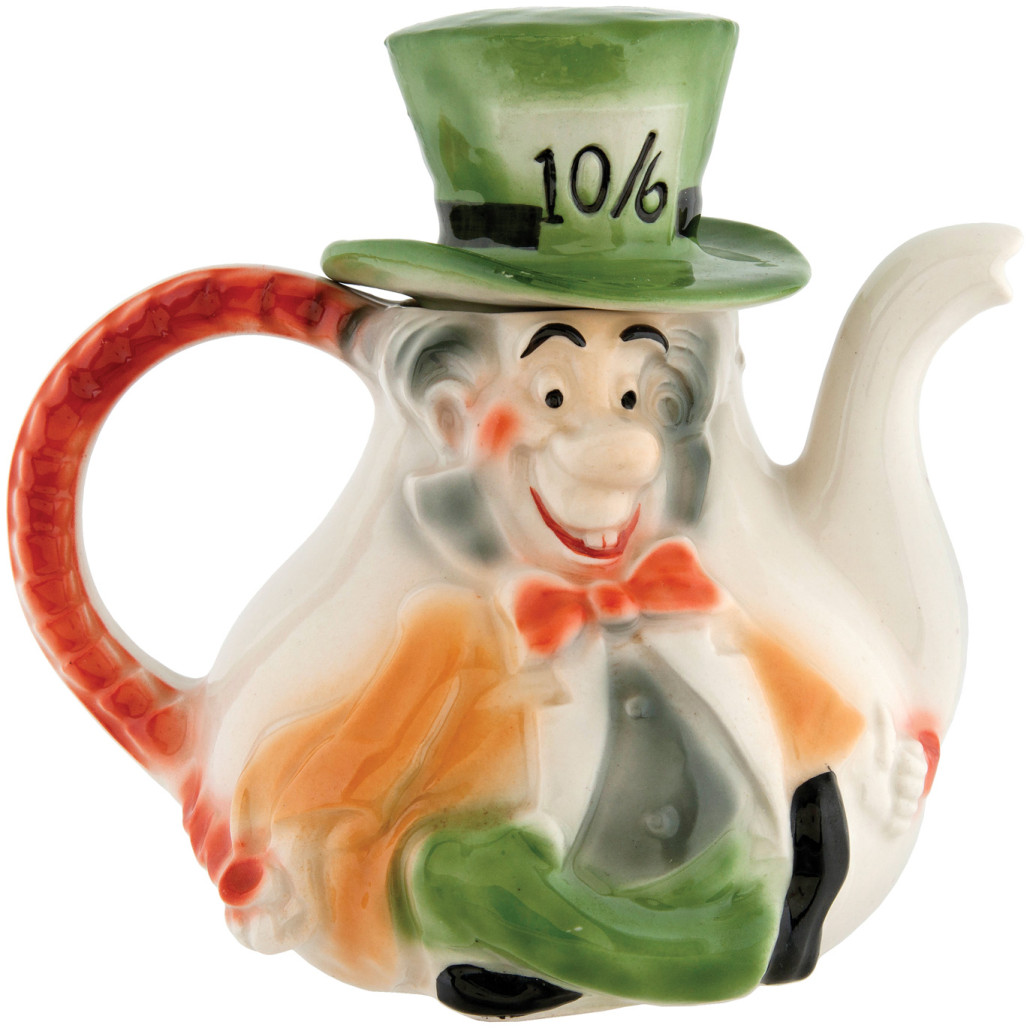 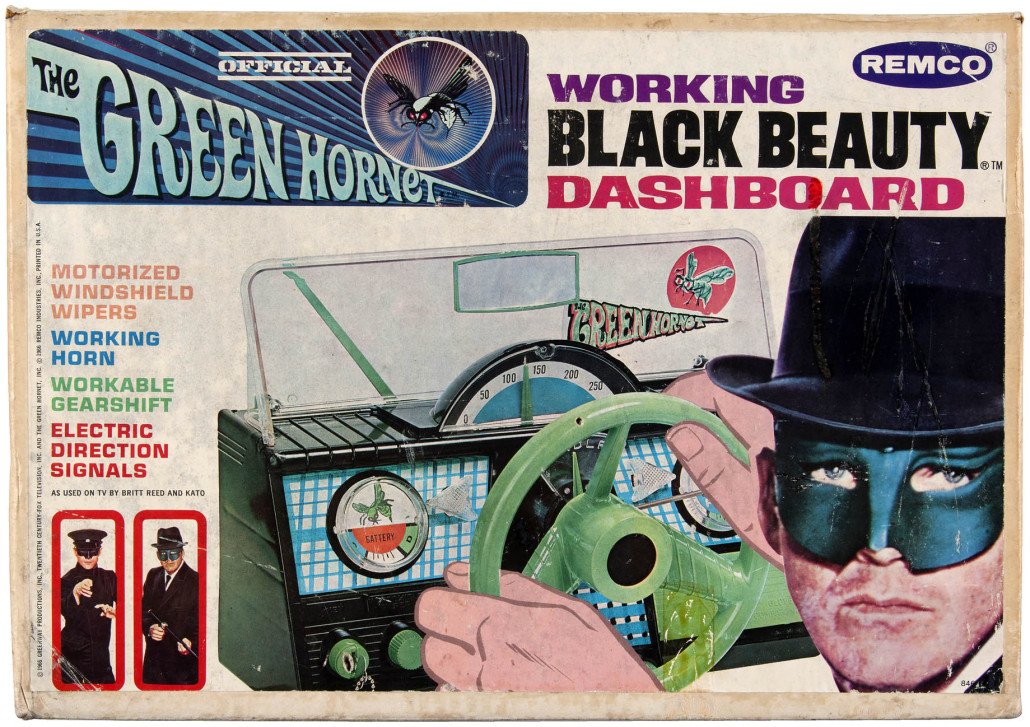 “The rarity and condition of key items from the Gary Keller collection played a major role in our achieving another million-dollar-plus sale,” Winter remarked. Those items included an Ideal Batman Play Set, $10,247; a Hot Wheels Line 1970 store display with 16 die-cast replica vehicles, $6,072; and two windowpane-boxed Posin’ Dolls from Ideal’s quartet of “Super Queens.” Wonder Woman raced to $5,313; while Aquaman’s wife, Mera, was bid to $4,898. 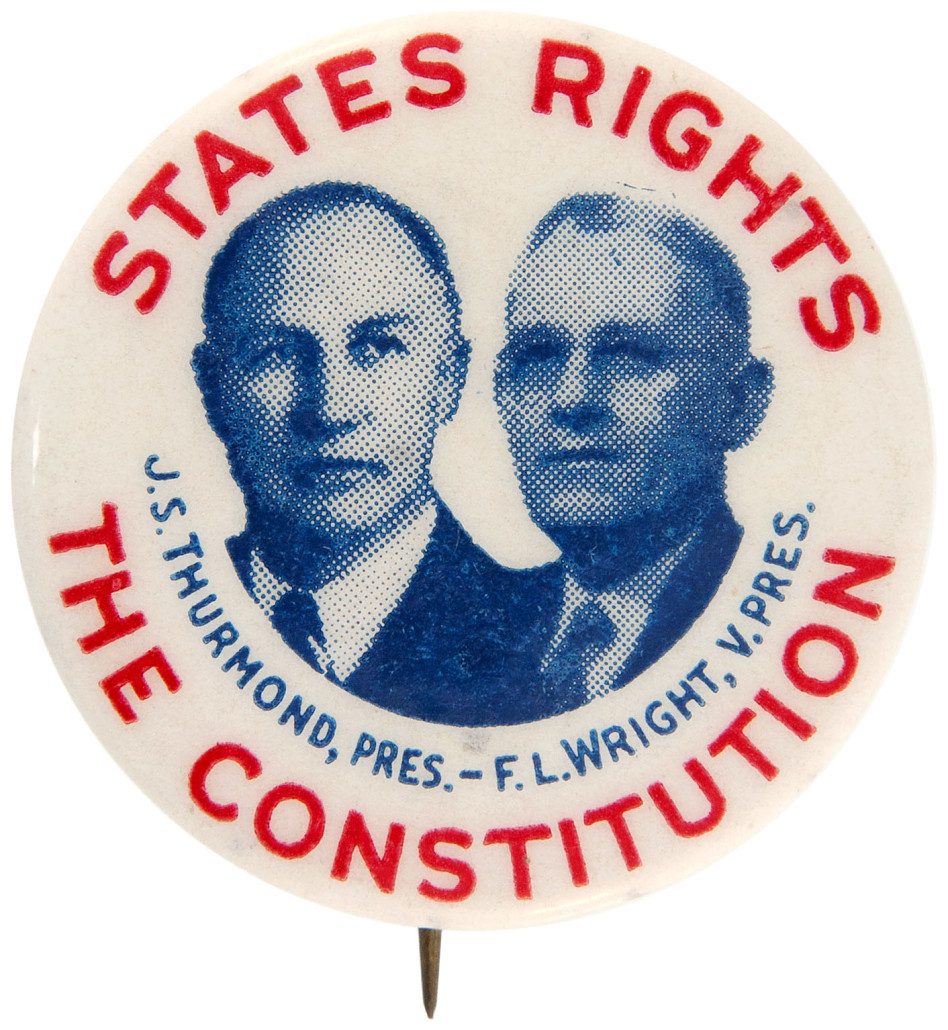 A rare Black Panther poster with a photographic image of founders Huey Newton and Bobby Seale in front of the group’s storefront headquarters in Oakland, Calif., was a popular entry, selling for $4,427 against a $400-$1,000 estimate. A circa 1969 Emory Douglas poster depicting a black female revolutionary with a rifle and spear swept past its $400-$700 estimate to settle at $1,984.

Concert posters flexed their muscles and attracted stunning prices, just as they did in Hake’s July 14-16 sale. “As was the case with our summer auction, many posters we offered were extremely rare examples that just don’t turn up at auction,” said Winter. A thin cardboard poster for The Doors’ Oct. 14, 1967 show at Susquehanna University (shown below) more than quadrupled its high estimate at $9,336. 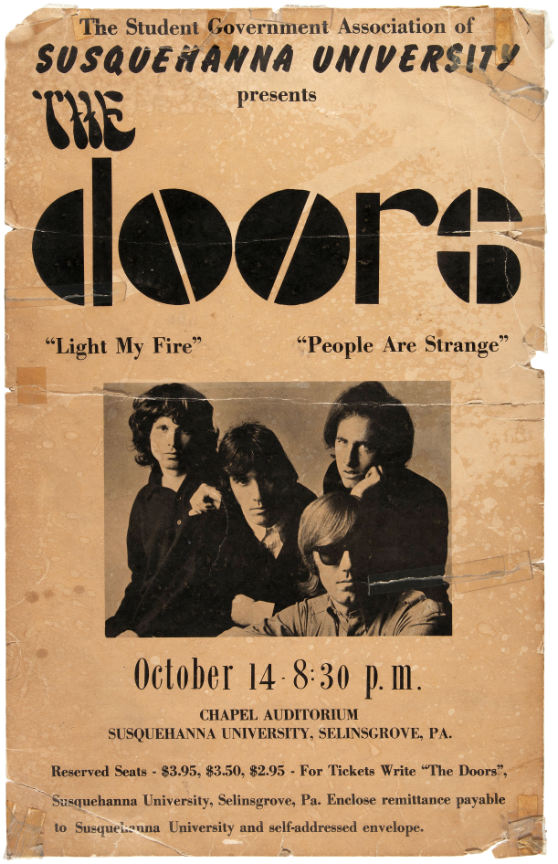 Another vividly visual flashback to the Sixties, a Jimi Hendrix Experience concert poster from Germany with artwork by Gunther Kieser blazed to $6,600. 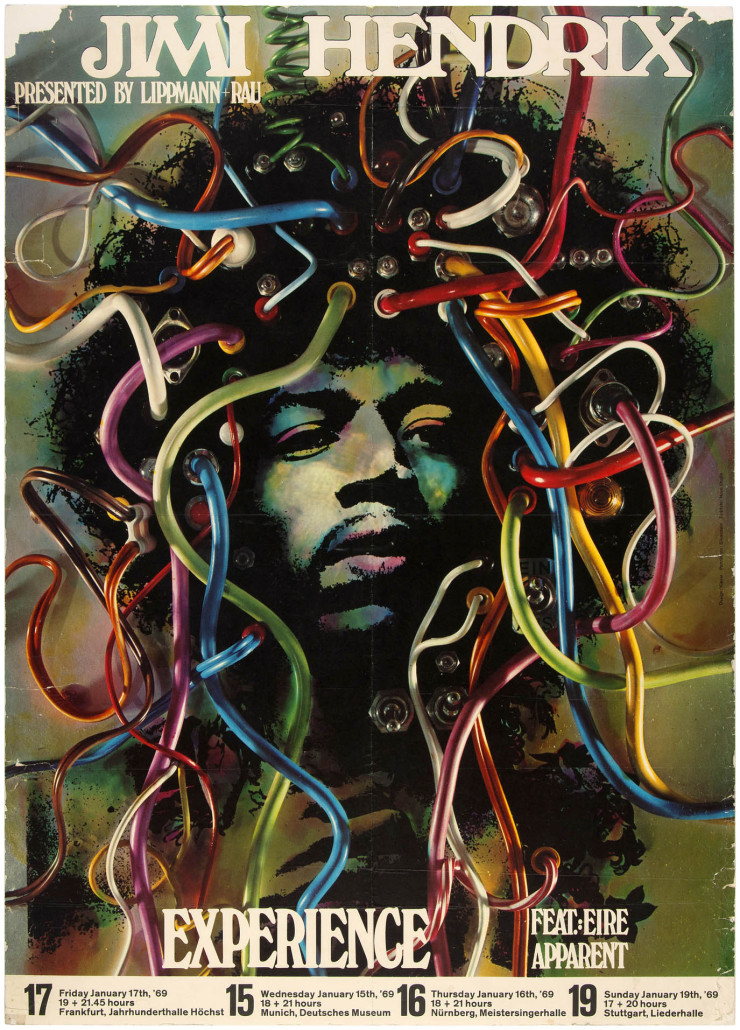 Sports collectors vied for a 1960s Baltimore Colts retailer’s-display bobbing head that closed at $5,983. The large, impressive figure stands 13-1/2”, much taller than the typical 5-inch to 8-inch figures that were popular at that time.

Baseball cards always do well at Hake’s, this time leading off with a 1924-1925 Aguilitas #869 Oscar Charleston (PSA Poor 1) that realized $5,509. The Cuban card produced for the Aguilitas Cigarette brand features a glossy photo front with the text “Charleston Base Ball.”

All prices quoted in this report are inclusive of 15% buyer’s premium.