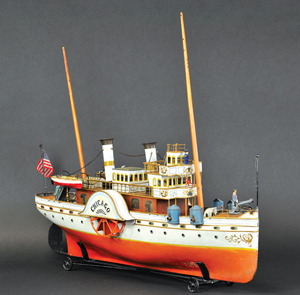 “Many pieces in the sale surpassed their high estimates, including the top five lots. The Marklin Paddle Wheeler ‘Chicago’ sold for $264,500 against an estimate of $200,000 to $250,000,” said Bertoia Auctions’ owner Jeanne Bertoia.

The German-made circa 1900-1902 “Chicago” was the very example depicted on the dust jacket cover of “The Allure of Toy Ships,” the respected reference Claus authored in 2006. From stem to stern, the 31-inch-long clockwork vessel with tiered decks, side-positioned lifeboats, finely hand-painted details and six original crew figures was described by Bertoia as “a marvel of artistic perfection.”

No small detail was overlooked in the creation of the “Chicago.” It featured ornately turned handrails rather than flat ones, a complex double-tier bridge at the front and even fancy curtains inside the windows.

Competitors vying for the pricey “Chicago” included three phone bidders, online bidders and several bidders in the gallery. An East Coast US collector who had sent a representative to assess the toy prior to the auction claimed the day’s top prize with a phone bid of $264,500.

The buyer of the “Chicago” had been the underbidder on the record-setting Marklin “Providence” boat, which sold at Bertoia’s for $247,250 on May 12, 2012 (Dick Claus collection, Part I). “He wasn’t going to miss out this time,” Bertoia said.

Of the top 10 lots, six were battleships. An imposing circa-1902 Marklin first-series Battleship “New York” was ready for engagement with its array of guns, an armored canon, crane at stern side, and railed observation decks. The formidable 35-inch clockwork warrior was a crowd favorite and sailed off to an East Coast US buyer for $155,250 – more than twice the high estimate.

A second-series Marklin Battleship “Mexico” boasted a busy superstructure with guns positioned in a row at its sides and at upper and deck levels. Beautifully hand painted in tobacco and cream with cornflower blue accents, the 30-inch vessel achieved $126,500 against a presale estimate of $60,000-$70,000. The toy was shipped back to its German homeland.

Sold to Germany via the Internet, a Marklin Deutschland electric-powered ocean liner commanded $149,500 – nearly triple the low estimate. It was one of nine boats that broke the six-figure barrier in Bertoia’s sale, prompting Jeanne Bertoia to observe that, “when compared to auctions of even a few years ago, prices on fine European toy boats have escalated quite dramatically.”

The Claus collection also included rare, early toy trolleys. Several floor bidders and three other bidders on the phones chased the premier entry of the group, an 18-inch electric-powered Voltamp #2115 Interurban Trolley with tin-on-wood frame with cast wheels and fittings. Estimated at $14,000-$15,000, it collected a much heftier than expected “fare” of $24,250 from a bidder in the audience.

Many of the Heyde sailor figures, which had served as accessories to the period boats in the Claus collection, doubled and even tripled expectations. A group lot replicating a blue-uniformed work party had been estimated at $600-$800, but didn’t have to put in any overtime to reach $3,450.

Approximately $600,000 of the sale total was attributable to floor bidders, some of whom had flown in from Europe expressly to attend the auction. Approximately one-third of the 374 lots went to the Internet; phone and absentee bidders prevailed on the remainder.

Interest in the renowned Claus collection didn’t end with the final drop of the auctioneer’s hammer, however.

“People who had attended the auction called afterwards to say they didn’t know why they hadn’t raised their hand to bid on this particular lot or that one, and wanted to know if any toys were available to purchase postsale. But the collection was 100 percent sold,” Jeanne Bertoia confirmed. “I’ve always said that if you pay a high price for an item, you forget about it in a month. But it’s the one that got away that you never forget.”

In retrospect, it was evident that the Nov. 10 sale was a social event enjoyed by all. In keeping with what is now a tradition at their higher-profile sales, Bertoia’s hosted a catered gourmet luncheon to thank those who had come to the gallery for a “live auction” experience. Guests sipped wine and dined on freshly carved turkey, stuffed pork and other delicious offerings.

“After the sale – like our other sales in the past – we received nice thank-you notes and even gifts from people who said they appreciated our hospitality,” said Bertoia. “We do make an effort to create an atmosphere that will encourage our friends in the hobby – and friends we have not yet met – to attend our auctions in person. We’ve found that our auction environment has motivated more couples to attend, which is very nice to see.”

Bertoia’s will host a cast-iron automotive toy auction in March, followed by their semiannual toy, bank, dollhouse and doorstop auction on May 3-4. For additional information, call 856-692-1881 or e-mail toys@bertoiaauctions.com. Visit Bertoia’s online at www.bertoiaauctions.com.

OVERVIEW OF AUCTION RESULTS FOR PARTS I AND II:


A high-energy adventure from start to finish, the two-part auction of the Dick Claus antique toy boat collection left little room for doubt regarding the current strength of the antique toy market. The combined total from Bertoia’s auction sessions held May 12 ($1.8 million) and Nov. 10 ($1.6 million) – both featuring the Claus collection exclusively – confirmed what the rest of the antiques and fine art market has known for several years, now – that the rarest and best of any category are like money in the bank.

The average lot price during the 210-lot May session was a remarkable $8,500, a figure that would delight nearly any auctioneer. The top lot, Marklin’s majestic 26-inch clockwork “Providence” boat, took the blue ribbon at $247,250. The prestigious Marklin brand dominated Part I, claiming seven out of the top 10 slots with highlights including a “Kaiserin Augusta Victoria” steam-powered ocean liner, $138,000; a boxed first-series “Battleship New York,” $109,250; and a circa-1915 second-series “Battleship Brooklyn,” $103,500. As described in the accompanying main feature, Part II followed a very similar pattern, with Marklin productions ruling the high seas and a Paddle Wheeler “Chicago” realizing the highest individual price of any toy in the Claus collection: $264,500.

View the fully illustrated catalogs, complete with prices realized, for Parts I and II of Bertoia’s auction of the Dick Claus Antique Toy Boat Collection online at www.LiveAuctioneers.com. 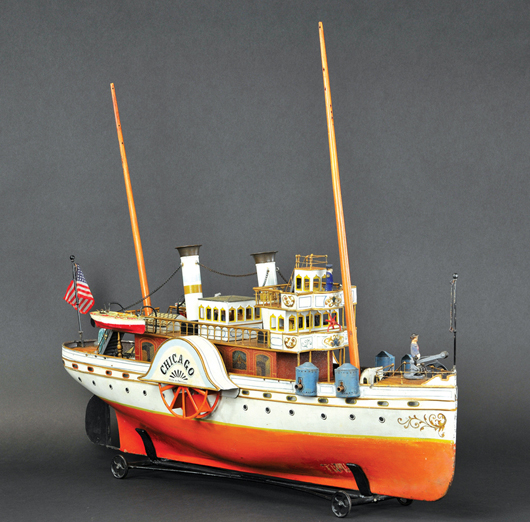 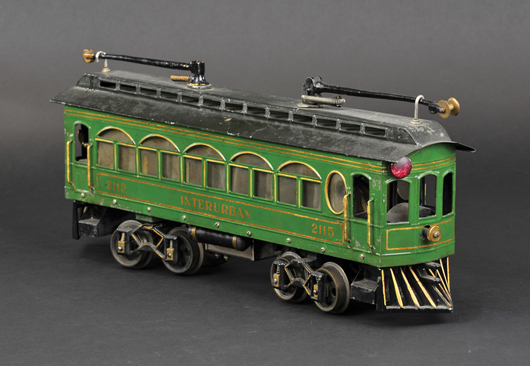 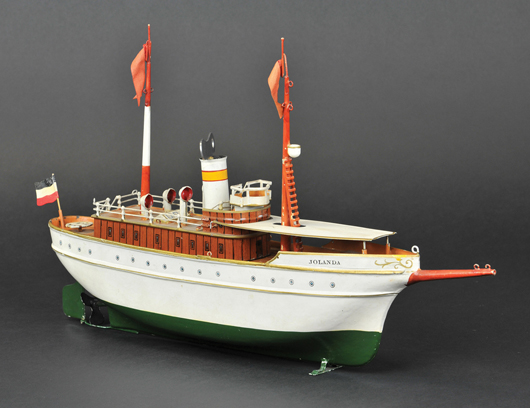 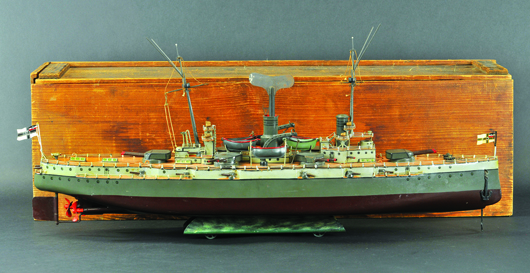 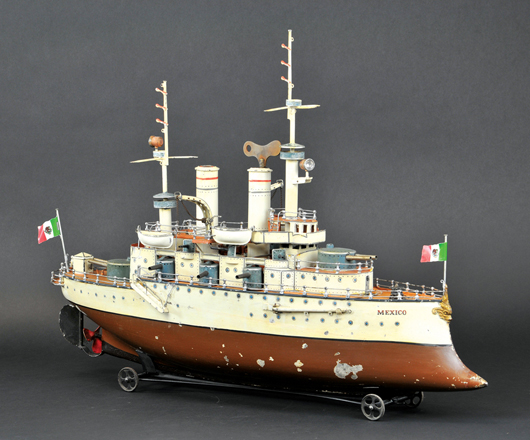 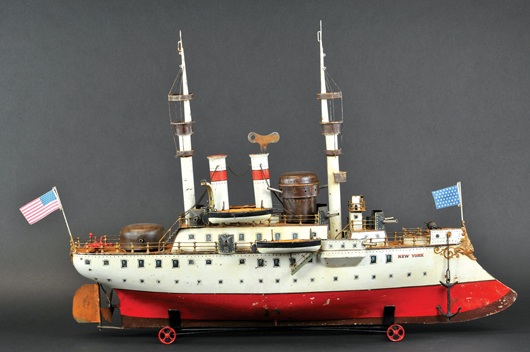 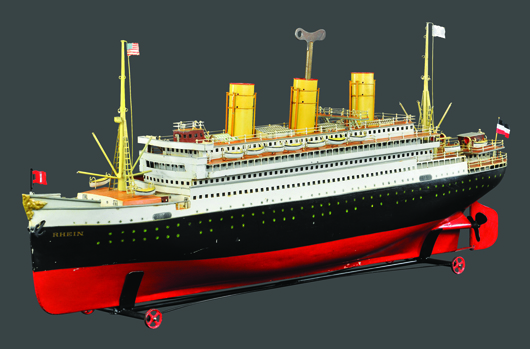