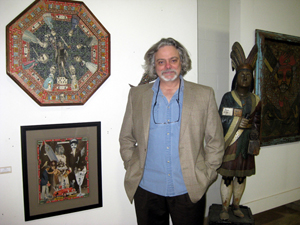 Georg Jevremovic, owner of the Material Culture store and auction gallery in Philadelphia, was particularly pleased with sale results for the work of self-taught artists. At left are two works by artist Felipe Jesus Consalvos (1891-circa 1960): the octagonal ‘Do Not Storm the System’ sold for $4,000, ‘Young America (below) for $2,100.

PHILADELPHIA – Objects on display at the 60,000-square-foot Material Culture anchor store on Wissahickon Avenue have been fascinating collectors since 1996. Beginning with “New World Orders” on May 5, the firm plunged into the international auction market, presenting a sale that mixed rare exotic objects with lots that were colorful and affordable.

Owner George Jevremovic built on his globe-trotting experiences to assemble the diverse offerings on the block: “I have been working for 30-plus years overseas in Asia and Turkey and the Middle East for Material Culture and in my other businesses. What I tried to do here is kind of a personal approach. You can transcend international borders through art and aesthetics.”

Entering Material Culture’s space has a “Welcome to the Jungle” quality – a monumental dinosaur decorated by self-taught Nigerian artist Prince Twins Seven-Seven (1944-2011) dominates the main lobby. The auction gallery occupies a separate space off the balcony.

Bidders had a chance to preview auction lots in a vibrant kick-off party a week before the sale. People on the hand enjoyed Middle Eastern food, while beating time to the infectious music from the Joe Tayoun Band. The crowd was as diverse as the antiques with a far better balance of generations than found at more stuffy events. Younger buyers found the estimates tempting – “I could afford that” was a common comment.

Jevremovic was extremely pleased with the online activity during the sale and overseas participation via phone and computer. In the future, he would like to grow the crowd on the floor. “I think we will because we’ve got a huge customer base for Material Culture, he said. “When we start advertising these auctions directly to that clientele, I think a lot of people will be showing up.”

Major works by self-taught artists from different cultural backgrounds inspired some of the most competitive bidding. The catalog led off with several brief biographies, including one for Felipe Jesus Consalvos, who emigrated from Havana to Miami in 1920. His mixed media collage on a guitar brought a $6,000 hammer price.

“He was a self-taught surrealist,” pointed out Jevremovic. “What’s important about this guy is that, when surrealism was being invented in Europe in the 1930s and 1940s, he was mirroring it without any understanding of western ideas about art.

Also on the block were three works by James Castle (1899-1977), a deaf American artist who created works from found objects. His career was the subject of a major retrospective at the Philadelphia Museum of Art. An untitled group of five figures sold for $3,400 and his drawing Labor Day for $2,100.

Among the paintings by Prince Twins Seven-Seven, who had been artist-in-residence at Material Culture, his vivid The Dream of the Abiku Child brought $6,000. A 1950 work by Kwame (Almighty God) Akoto from Ghana, the touching Help Me I’m Divorced, brought $1,000. A thought bubble on the surface said, “My God touch the heart of this woman.”

There were strong prices as well as bargains in every category. In Chinese decorative arts, an ivory “doctor’s lady” sold for $2,400, an 18th century carved root assemblage for $2,900, and an antique ivory vase with elephant heads for $3,000. One of the top lots of the sale came up in contemporary Chinese painting where Guo Runwen’s 1988 Standing Nude with Back View climbed to $22,500.

The 20th century furniture included a George Nakashima (1905-1990) walnut coffee table sold for $5,200, a pair of stylish tubular steel and leather lounge chairs for $1,100, and a highly useful Florence Knoll dining table for only $250.

Buyers looking for something more unusual found good prices in a selection of early Indian sculpture. A 12th century Jain relief brought $5,400 and a pair of 16th century sandstone columns $1,700. Equally dazzling was a selection of Syrian parlor and bedroom furniture inlaid with mother-of-pearl and bone; one decorative walnut settee from this group sold for $2,000.

A central fine arts section of the sale was devoted to paintings, drawings and prints, and auction bidders found excellent buys there. Jevremovic emphasized that he tried to limit reserves: “There were bargains because I didn’t overprotect.” For example, a lovely 19th century Dutch marine painting by Henri Adolphe Schaep went to a new home for $2,000. A lot of five bright murals by American artist Leonard Pytlak brought $1,500.

The sale concluded with sections of furniture upholstered in bold prints, architectural elements, and a large selection of textiles and carpets, one of the specialties at Material Culture. One bidder took home a silk kaftan from Uzbekistan for $400. Another purchased a Kazak carpet from the Caucasus for $650.

The next auction on May 26 will focus on this field; the catalog can be viewed online at LiveAuctioneers.com. Jevremovic notes, “It’s textiles, rugs and ethnographic objects. There are several collections we got lock, stock, and barrel.”

The owner knows that his offerings will continually evolve based on the consignments available in the marketplace: “We want to be a full service auction house in the Philadelphia area, so there’s only so much planning one can do. We want to create auctions that will move all sorts of material. 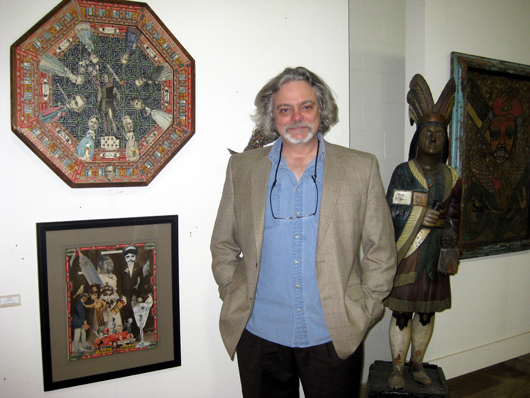 Georg Jevremovic, owner of the Material Culture store and auction gallery in Philadelphia, was particularly pleased with sale results for the work of self-taught artists. At left are two works by artist Felipe Jesus Consalvos (1891-circa 1960): the octagonal ‘Do Not Storm the System’ sold for $4,000, ‘Young America (below) for $2,100.

Competition was brisk for the works of Felipe Jesus Consalvos. This guitar ornamented with mixed media collage brought $6,000, at the high end of its estimate. Material Culture image.

This 19th century trade figure carved by Samuel Robb long stood at the door of Reese’s Antiques on Pine Street in Philadelphia. The handsome sculpture with much of its original paint brought $29,000, top lot of the inaugural sale. Material Culture image. 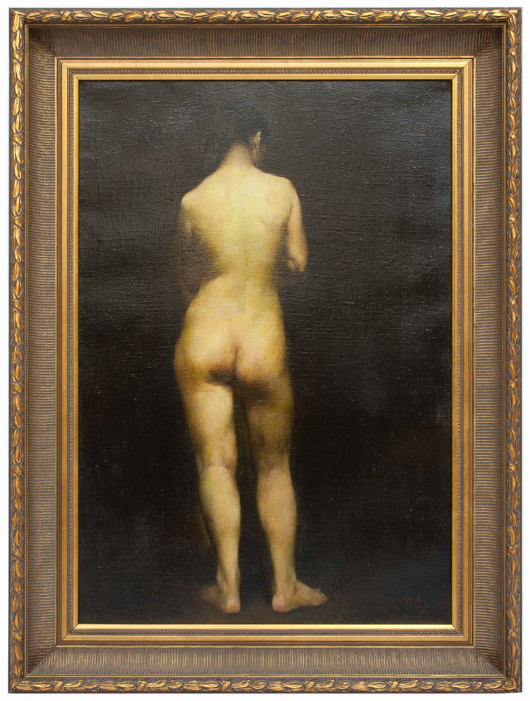 Consigned from a Delaware collection, this ‘Standing Nude’ by contemporary Chinese painter Guo Runwen (b. 1955) sold for $22,500. Material Culture image. 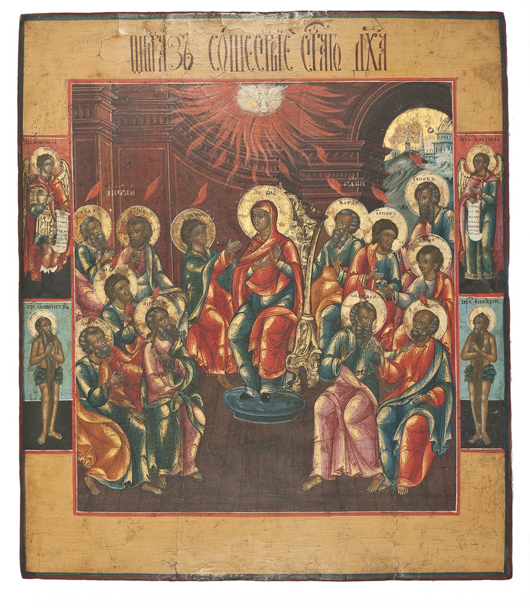 Among the many offering of devotional and religious art, this 19th century Russian icon with silver oklad was a standout lot, bringing $5,600 above an $800-1200 estimate. Material Culture image. 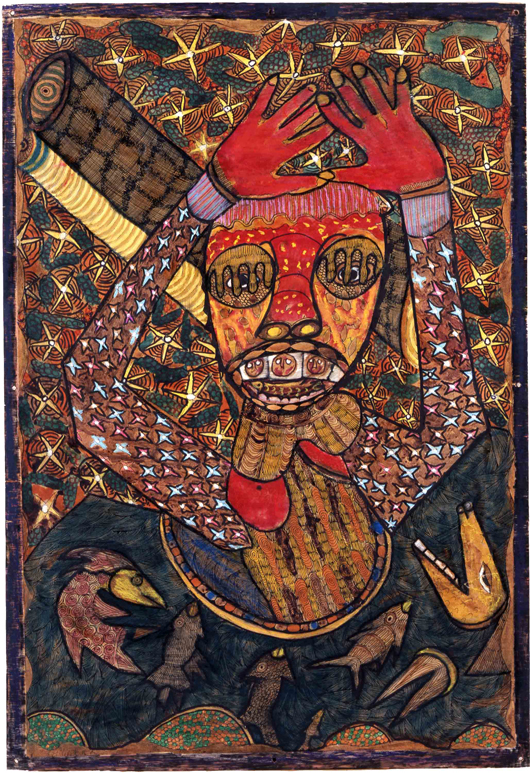 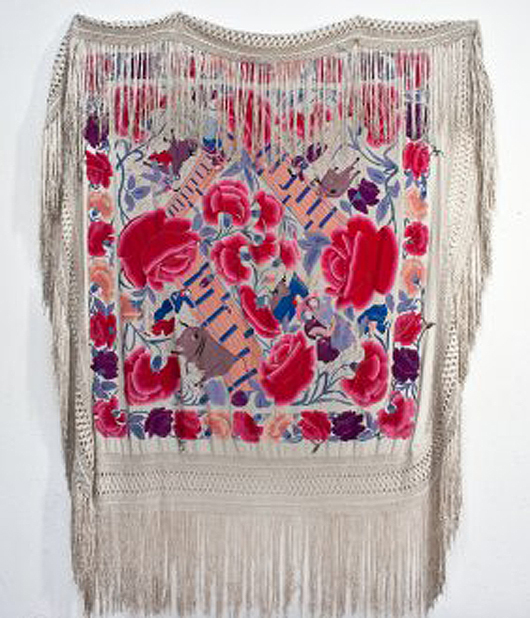 Material Culture to rekindle ‘Spirits of Reincarnation’ with Oct. 14 auction