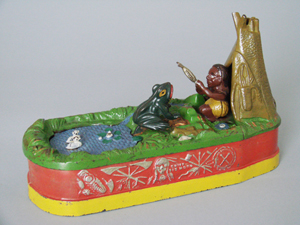 TIMONIUM, Md. – Interest was keener than ever, and the bidding action was relentless in RSL Auction’s sale of antique toys and banks held May 22nd at Richard Opfer’s suburban Baltimore gallery. “We started at noon and finished at 20 till three – it was about two hours and 40 minutes of very serious bidding,” said RSL co-owner Ray Haradin. Internet live bidding was provided exclusively by LiveAuctioneers.com.

In all, the auction took in $1.8 million (all prices quoted include 21.5% buyer’s  premium). “They came to buy; they didn’t want to sit there with an auctioneer trying to milk a few extra dollars out of them,” said Haradin. “When Rick [Opfer] is at the podium, you put your hand up or you don’t get the toy.”

The featured attraction of the 360-lot sale was the Richard C. Stevens collection, a 24-year assemblage of cast-iron mechanical banks boasting superb conditions and with provenance reflecting several of the most prestigious collections of the past half-century.

Many auction records were broken, said Haradin – “more than I can remember, and in the heart of a recession, as well.” The top lot of the day was a circa-1905 J. & E. Stevens Calamity bank with rare chocolate-brown base. When activated, the football-theme cast-iron bank depicts two Yale players tackling a running fullback from Harvard. Formerly in the Stephen Steckbeck collection and in near-mint-plus condition with original box, the bank scored a mighty auction price at $78,975.

One of the rarest mechanical banks offered was a circa-1930 Kilgore Mfg. Co. Turtle bank. One of only nine examples known, the near-mint cast-iron amphibian could boast a background that included tenure in the Covert and Gertrude Hegarty, Stan Sax, and Dick Stevens collections. It finished near the top of its estimate range at $72,900.

Designed by Charles Bailey for J. & E. Stevens around 1899, the wonderful Chief Big Moon bank depicts a Native American chief sitting at the entrance to his teepee and facing a large frog and swan pond. Described in the auction catalog as “extraordinary” and “as mint as it gets,” the bank with provenance dating back to the Bill Bertoia collection swept past its $20,000-$30,000 estimate to set a new auction record at $41,310.

Another big winner was the circa-1880 Initiating First Degree bank manufactured by Mechanical Novelty Works. An appealing, entertaining bank, its three characters – a goat, a frog and a black youth – appear to be participants in some sort of ritualistic initiation. When a coin is placed in the boy’s tray and the lever is activated, the coin drops into the frog’s mouth and the goat rams the boy’s backside with its horns. Estimated at $30,000-$50,000, the near-mint money box earned $60,750.

A double-chimney, circa-1873 J. & E. Stevens “Novelty” building bank drew heated competition because of its rare color combination of seafoam green, cream, tan and red. Haradin related its background: “It was found about 15 years ago and came directly from the attic of a farmhouse not far from the Stevens factory in Cromwell, Connecticut. It was the first one ever to turn up in this extraordinary color combination, and to my knowledge, it is the only one known.” It was bid to nearly twice its high estimate, closing at a record auction price of $29,160.

Haradin noted a revival of interest in American clockwork toys, a category that he felt had shown some softness of late. A circa-1885 Ives, Blakeslee toy known as “The Boxers” or “Sparring Pugilists” earned a punchy $12,757.50; while a Civil War-era painted-tin clockwork omnibus with cast-iron wheels, measuring 22 inches in length and probably created by Hull & Stafford, met its presale expectations at $47,385.

“It was, by far, our best-attended sale to date,” Haradin said, in summarizing the event. “It was like a convention. The night before the auction, RSL hosted a dinner party for 56 people – crab cakes and filet mignon. We had a fantastic time and it put everyone in a great mood for the auction.” 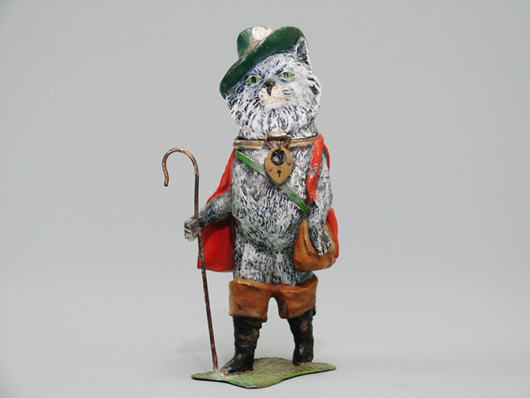 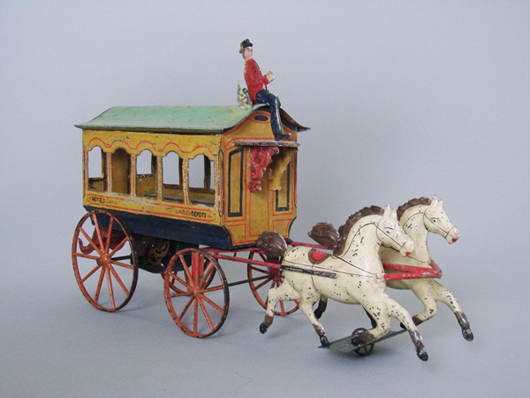 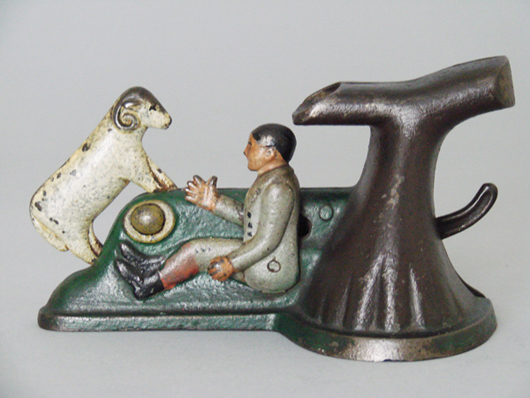 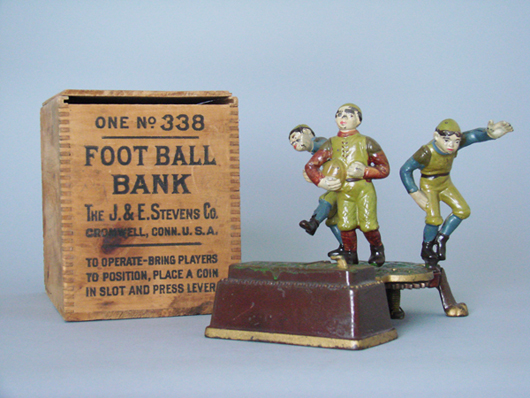 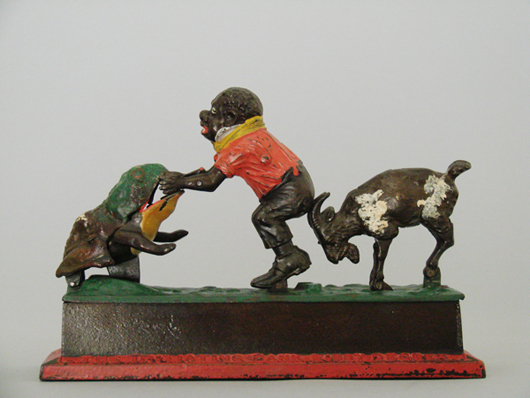 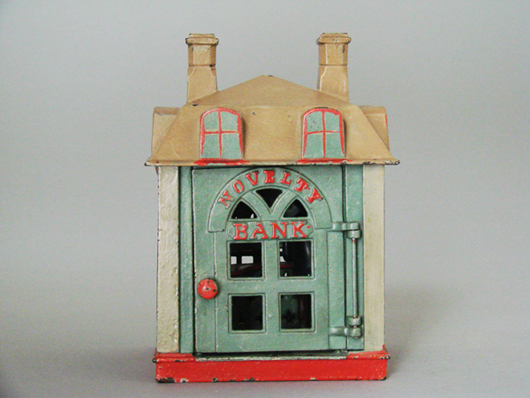 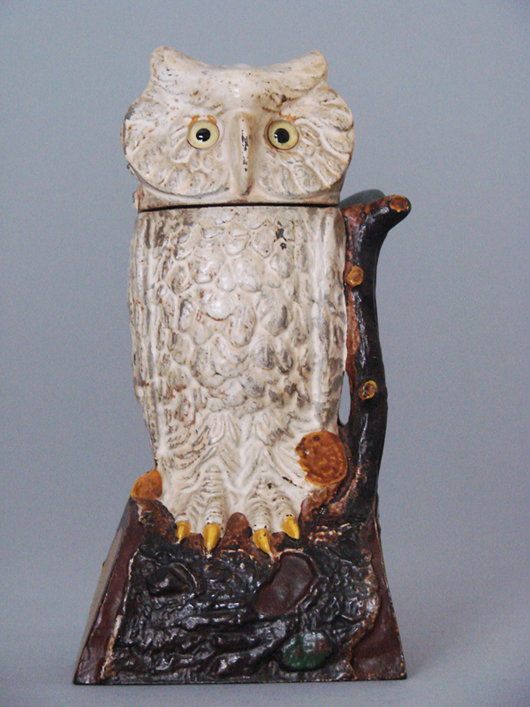 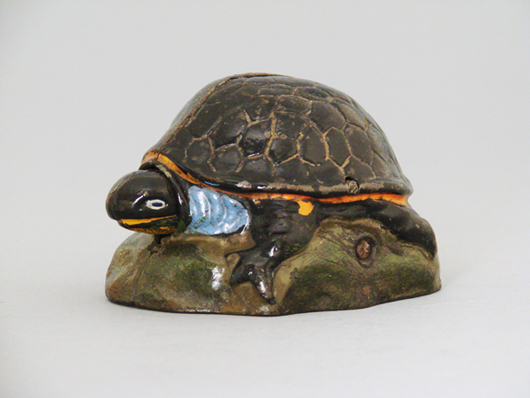