WEST PALM BEACH, Fla. – If Palm Beach Modern Auctions’ (PBMA) season opener on September 24 is to be taken as any indication, there are more active buyers in the marketplace for high-quality modern and contemporary art than anyone may have thought. More than 1,800 online bidders vied against 125+ guests in house, with additional competition from six continuously engaged phone lines. LiveAuctioneers provided Internet live bidding services for the sale.

“We listen to our buyers and base our choice of consignments on what they tell us along with what we see trending. Clearly, it’s art that they want more of, and we’ve been doing our utmost to source works by not only the premier, established names but also the top talents of the younger generation,” said PBMA auctioneer and co-owner Rico Baca.

One of those “premier” names, Harry Bertoia (American, 1915-1978), continues to gain status with each PBMA sale. His elegantly spare, 46-inch-tall Sonambient sculpture composed of 36 beryllium, copper and brass rods came with extra cachet – a certificate of authenticity from Val Bertoia, Bertoia Studio. Against an estimate of $40,000-$60,000, the sculpture commanded $75,000. All prices quoted are inclusive of 25% buyer’s premium. 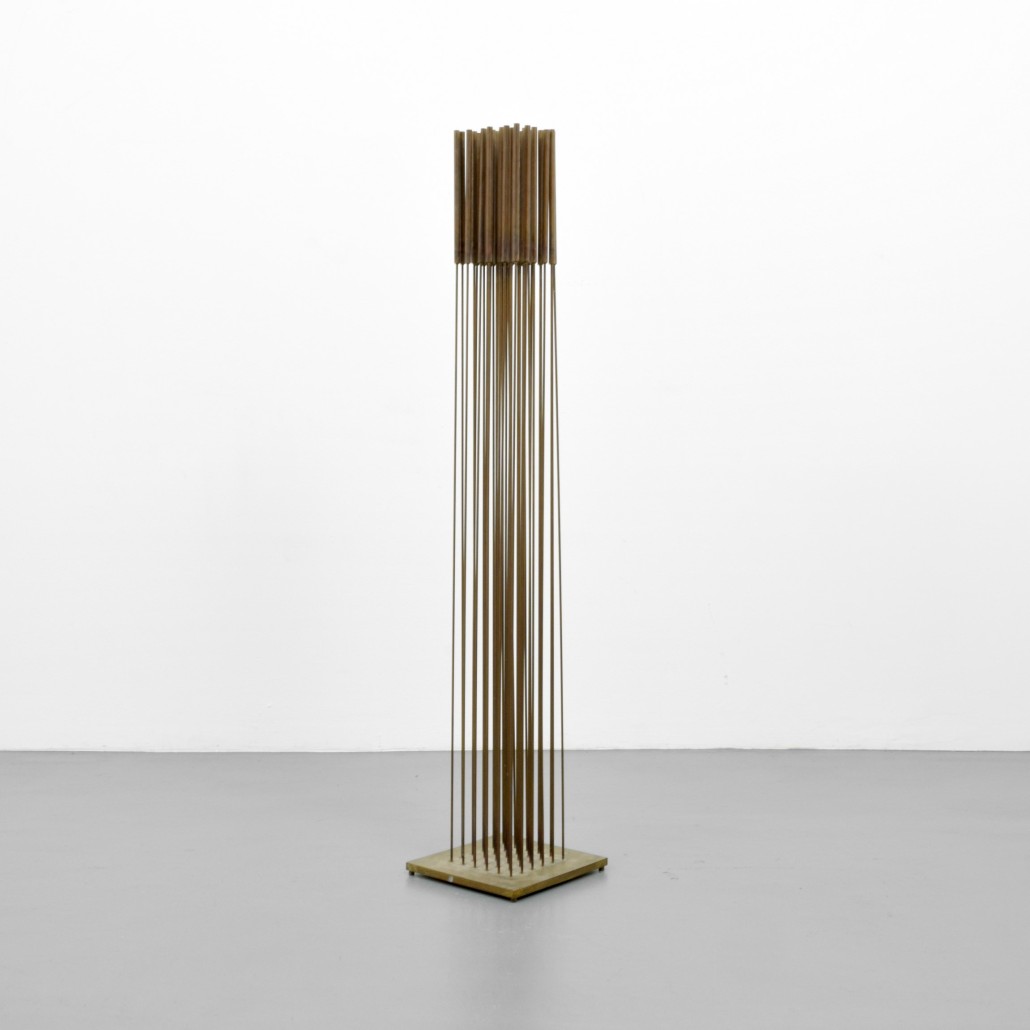 Several other sculptures found favor with bidders, including two works by Jesus Soto (Venezuelan, 1923-2005). Lot 157 (shown below), a screen-print on metal, nylon and plastic titled Vibrations Metalliques, from Soto’s 1969 edition of 250, reached $10,000.

Immediately following at Lot 158 was Soto’s 1967 mixed-media screen-print titled Vibracion, ed. 19/100, which sold for $8,125. Lot 66 (shown below), a large, seated-female nude bronze sculpture in the manner of Francisco Zuniga, tripled its high estimate with a winning bid of $12,000. 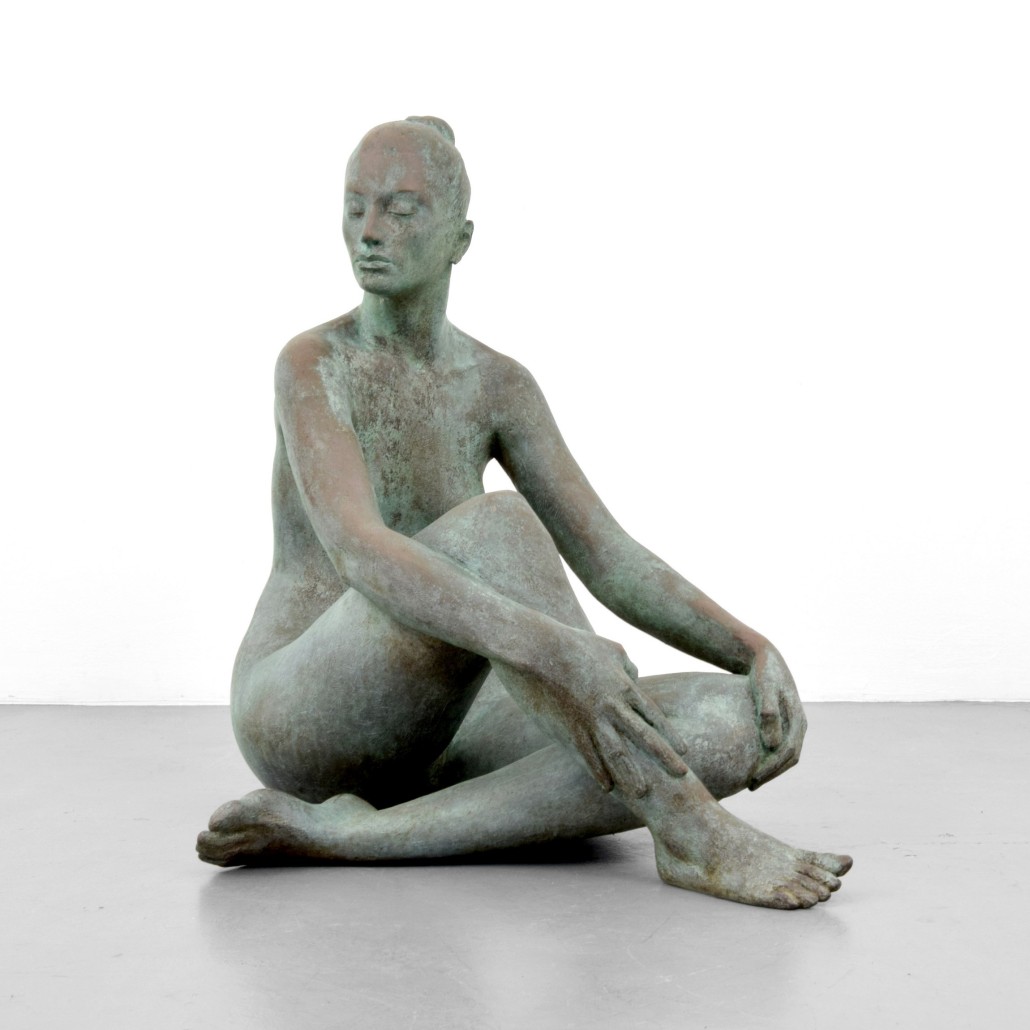 Lot 203, an Alice Ravenel Huger Smith (American, 1876-1958) watercolor depicting cattails in a moonlit field of pastel wildflowers had been passed down through the same family and displayed in the same residence since its purchase from a Boston gallery in the late 1940s or ’50s. Estimated at $5,000-$8,000, it was bid to $11,250.

A large, signed Nicola Simbari (Italian, 1927-2012) painting of fashionable women in a café (shown below) came with provenance from a Palm Beach estate and, before that, Wally Findlay Galleries. It settled within estimate at $7,500.

The appetite for Andy Warhol’s (American, 1928-1987) now-classic pop art was evident with the sale of Lot 161 (shown below), a silkscreen titled Electric Chair, #216 from a signed edition of 250. Its provenance included The Andy Warhol Foundation, which donated the piece to a 1998 charity auction in Philadelphia. It sold at PBMA for $10,000, the midpoint of its estimate.

Lot 315, an Joseph Fiore (American, 1925-2008) artist-signed original canvas artwork depicting abstract geometric forms in sunny colors, shown below, had been entered in the sale with a $1,000-$1,500 estimate. It sold for an especially strong $10,000 and was “one of the many nice surprises that appeared throughout the day,” Baca said.

While the day belonged to art, modern furniture hardly took a back seat. Prices were consistently pleasing for iconic pieces by distinguished names. Lot 302, a sinuous Vladimir Kagan for Directional upholstered Serpentine sofa (shown below) swept past its $2,500-$3,500 estimate to realize $11,875. 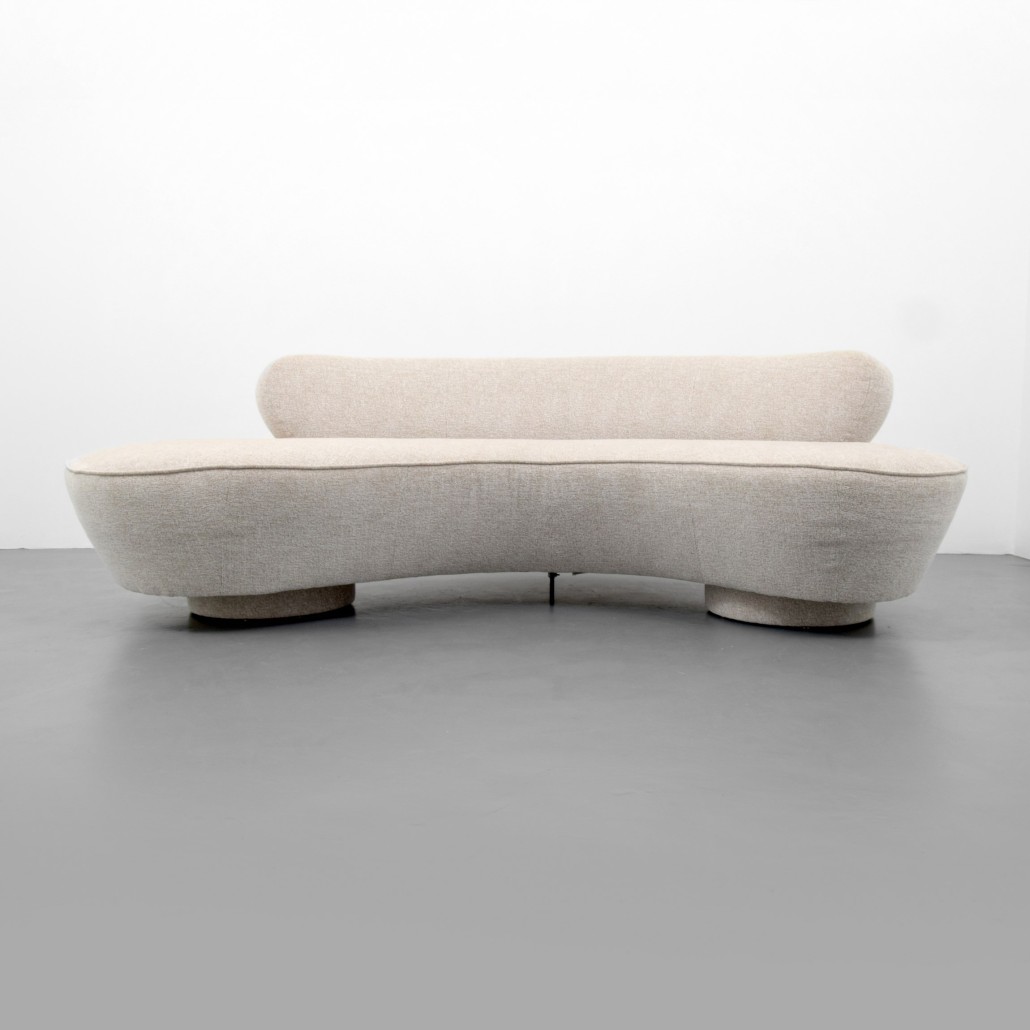 “It was just the sort of event we had hoped it would be,” said Baca. “We had happy consignors and happy bidders. When that happens, you know you’ve found the formula for a successful auction.”

Palm Beach Modern Auctions is currently accepting consignments for a two-day auction extravaganza in either January or February that will include premier modern and contemporary art, furniture and decoratives from Florida collections and estates.

“We can share some of the early highlights,” said Baca. “We’ve received another large Bertoia sculpture, many paintings, a couple of Angelo Botello sculptures, a choice collection of Picasso pottery, and even a couple of expensive Porsches. It’s going to be a well-publicized, high-end auction, and lots of fun.”

To discuss consigning to a future PBMA sale, call 561-586-5500 or e-mail info@modernauctions.com.