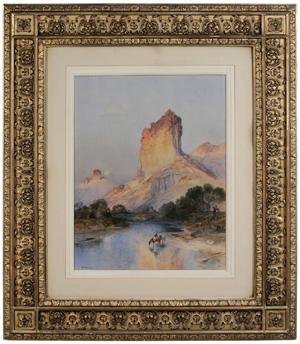 By far the sale’s top lot and a new record for Thomas Moran was his watercolor on paper, ‘Cliffs of Green River – Wyoming Territory, view of Castle Butte.’ The 28-x-21 1/4-inch painting is in its original late 19th century gilt wood and composition cassetta-style frame is inscribed verso in ink ‘T. Moran.’ It sold for a record $1.77 million (est. $250,000/$350,000). Image courtesy Brunk Auctions.

ASHEVILLE, N.C. – Breaking an auction record by $1 million is probably a record in itself. The Thomas Moran (1837-1926) watercolor that sold for $1.77 million at Brunk Auctions March 10 was a cool $1 million and change more than $690,000. That’s the previous Moran record. Ten bidders on the phone and two in the room all wanted Cliffs of Green River – Wyoming Territory, view of Castle Butte, a signed and dated (1883) Moran painting.

The watercolor had a lot going for it. Colors were fresh and bright and the artist’s original label verso noted the title and original price of $450. The auction catalog included a photograph of the painting in its original frame in the family dining room, circa 1895. A full provenance showing descent in the consignor’s family was awarded the winning bidder.

And that was Baird W. Ryan, a private New York City dealer bidding on the phone for a client. Ryan scaled a mountain of competition to buy the painting.

“The size, quality and detailed provenance were all factors for me to bid above the previous record price,” said Ryan in a phone conversation after the sale. “I am always looking for works by Thomas Moran of this quality and the market will always accept them.”

“I got louder and louder as we reached $1 million,” said auctioneer Andrew Brunk, who recently succeeded his father as owner of Brunk Auction. Excitement hit the ceiling when an in-house bidder broke the $1 million barrier. It went through the roof less than a minute later with a hammer of $1,500,000. The $1.77 million selling price includes the buyer’s premium.

Price valued ancient art especially his collection of carved Greek, Etruscan and Roman heads of deities and warriors. The clear standout was the Roman marble head of Apollo, A.D. 125-150, which opened and closed at its $130,000 reserve ($153,400 with buyer’s premium).

Other antiquities from the Price collection did well. A carved marble head of Hephaestion that dated from the late fourth early third century B.C. sold for $47,200. A carved marble torso of a satyr from the first century lacking head, arms and legs was $37,760. A bronze leg which Price purchased from Royal-Athena Galleries in New York City in 2001 brought $29,500.

Also from the Price collection was a Picasso etching on laid paper that continued the antiquities theme. Deux sculpteurs devant une statue (Two sculptors before a statue) was signed in pencil lower right. Its presale estimate of $2,000-$4,000 was demolished when a phone bidder ran it to $25,960.

Another lot that defied the odds was a Byzantine glass jug from the sixth or seventh century. It came from the 30-lots consigned by the estate of Dr. Joseph Chandler Battaile Sr. (1934-2011), a Memphis, Tenn., psychiatrist and benefactor of the arts. The 9 1/2-inch jug rose from a modest presale estimate of $400-$600 to $11,210, making it the top lot in the Battaile collection.

Thomas Moran’s Wyoming landscape was not the only scene from the American west in the sale. An Ansel Adams photograph of Half Dome and Moon, purchased by the consignor in 1965 with Adam’s personal recommendation, sold for $44,840 (est. $20,000-$30,000).

Total receipts for the March 10-11 sale with buyer’s premium were $4.2 million. That made it the second highest sale in the history of Brunk Auctions.

For information on upcoming sales, contact Brunk Auctions at 828-254-6846 or visit www.brunkauctions.com. 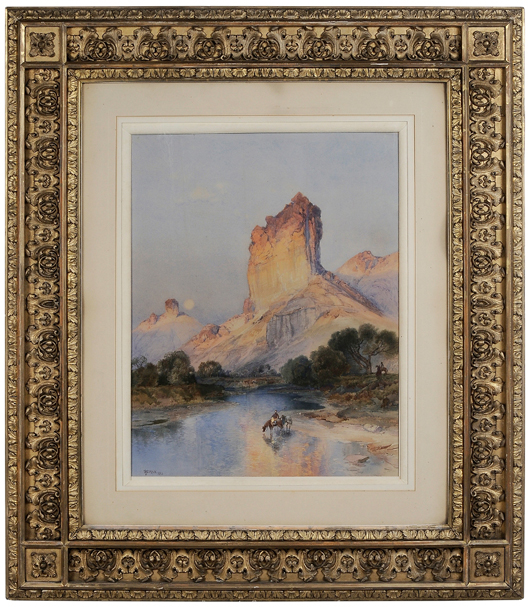 By far the sale’s top lot and a new record for Thomas Moran was his watercolor on paper, ‘Cliffs of Green River – Wyoming Territory, view of Castle Butte.’ The 28-x-21 1/4-inch painting is in its original late 19th century gilt wood and composition cassetta-style frame is inscribed verso in ink ‘T. Moran.’ It sold for a record $1.77 million (est. $250,000/$350,000). Image courtesy Brunk Auctions. 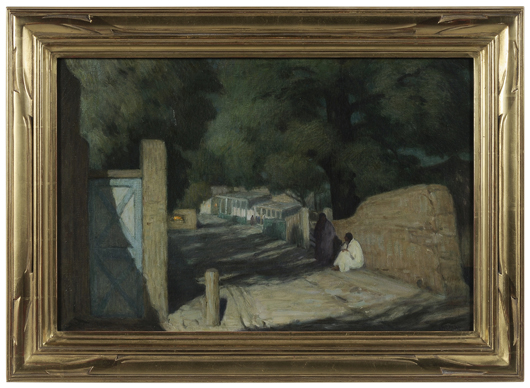 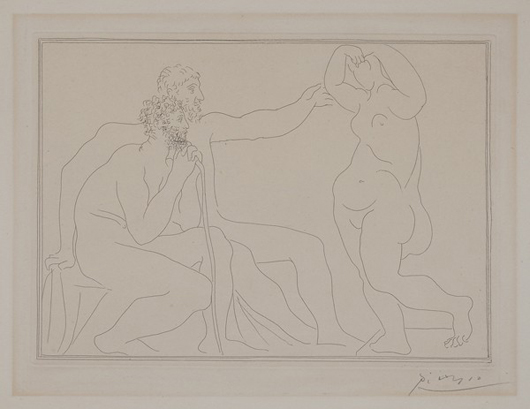 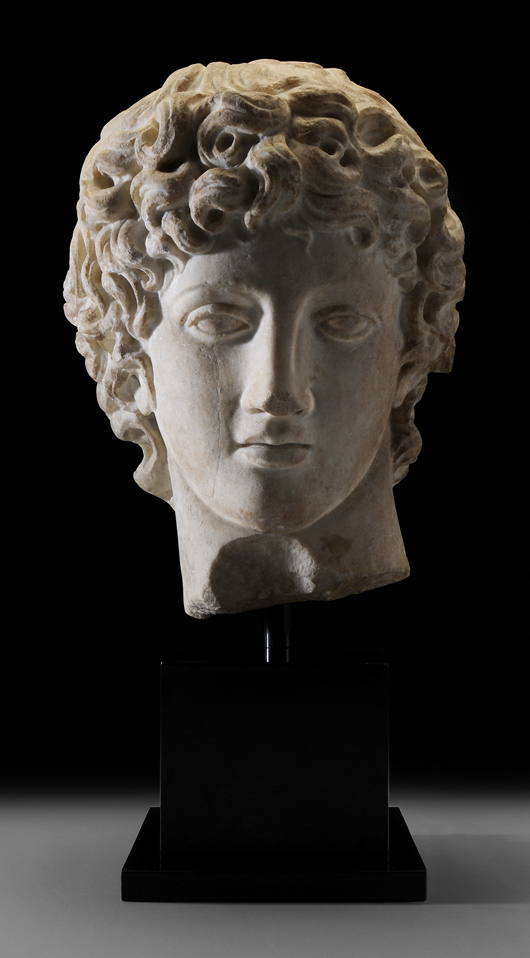 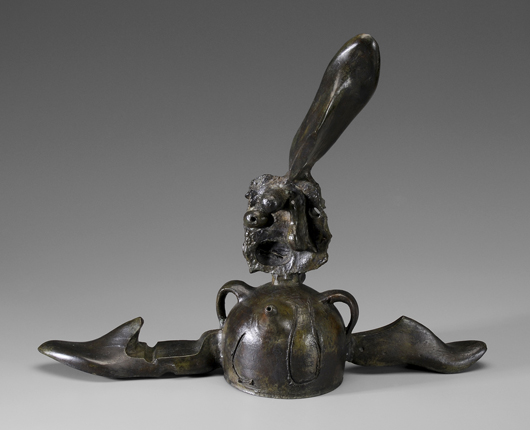 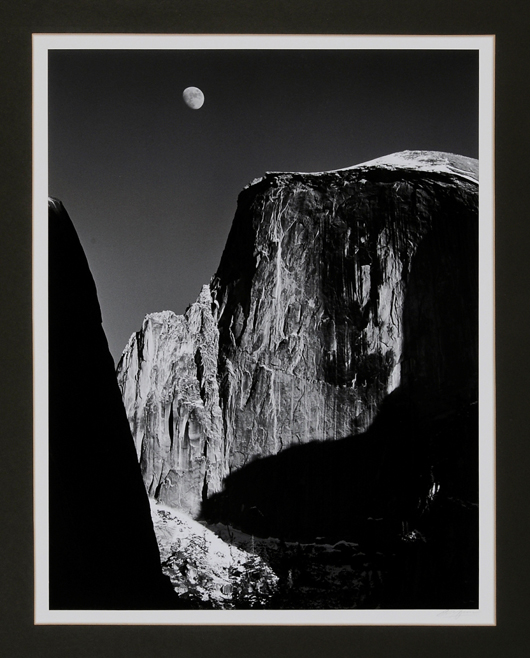