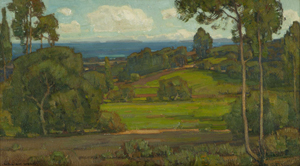 PASADENA, Calif. – Breaking a number of auction records and amassing over $1.7 million in sales, John Moran Auctioneers’ Fine Art Auction on Oct. 22 signaled the strength of the market for well-chosen California and American art dating from the late 19th century up to the end of the 20th century. The 254-lot sale, featuring paintings from estates and private collections in California and beyond, with over one-third hailing from the estate of Ernest A. Bryant III of Montecito, Calif., was notable for the success of post-1950 works, as well as for the high prices for works from the era in which Moran’s traditionally specializes, the late 19th to early 20th century.

Other artists also scaled dramatic heights, surpassing already high expectations. Millard Sheets (1907–1989) was represented by Pinto Herd, a 30-inch by 70-inch masterwork in oil dating from 1950. The painting’s mosaic-like pattern of galloping horses sustains energy and dynamism across the large canvas in a manner that only a supremely skilled wall muralist could achieve, and several bidders found their pulse racing when it went on the block. Bidding did not top out until it hit the $72,000 mark (estimate: $15,000–$20,000), after a prolonged and suspenseful battle. The sale sets a new second-place record for the artist.

Among the works by contemporary artists that performed well was an expansive oil by Santa Barbara artist Richard Schloss (b.1953), a breakout highlight originally estimated at $800–$1,200. Early Morning Clouds, Butterfly Beach, a dreamy, tranquil scene of a coastline bathed in rosy light, caused quite a stir during preview, and ultimately earned $6,000.

Additional highlights are as follows:

– The poignant Beyond These Infinities Lies Gold by Alexander Harmer (1856–1925) also from the Bryant Estate, depicting a group of weary travelers huddled behind a wagon at dusk as a desolate landscape rolls out on all sides, achieved $48,000 (estimate: $10,000–$15,000). 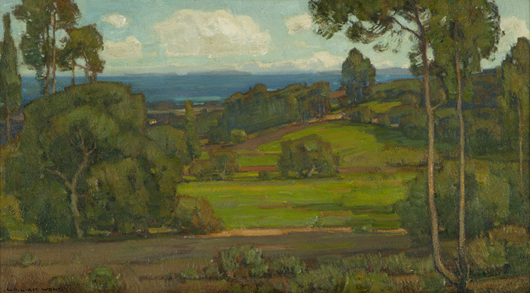 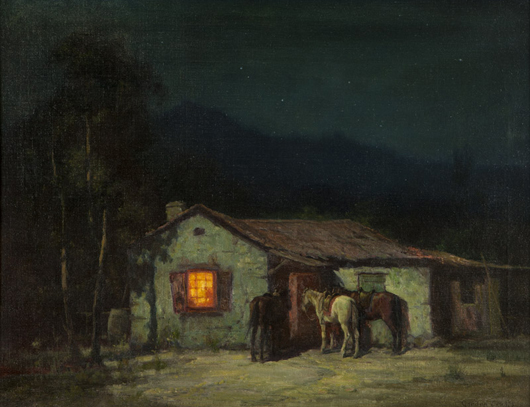 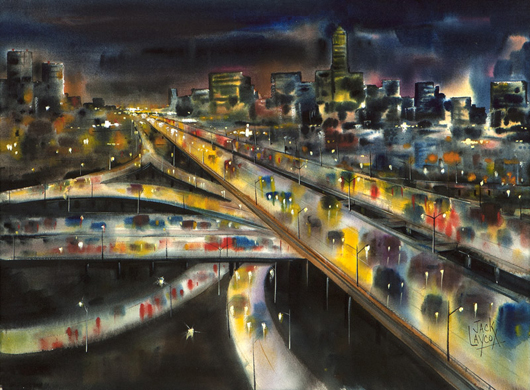 A moody watercolor scene of bustling freeway overpasses at dusk by Jack Laycox was estimated to find a buyer between $3,000 and $5,000, but set a new record for the artist’s work with a price of $15,600. John Moran Auctioneers image. 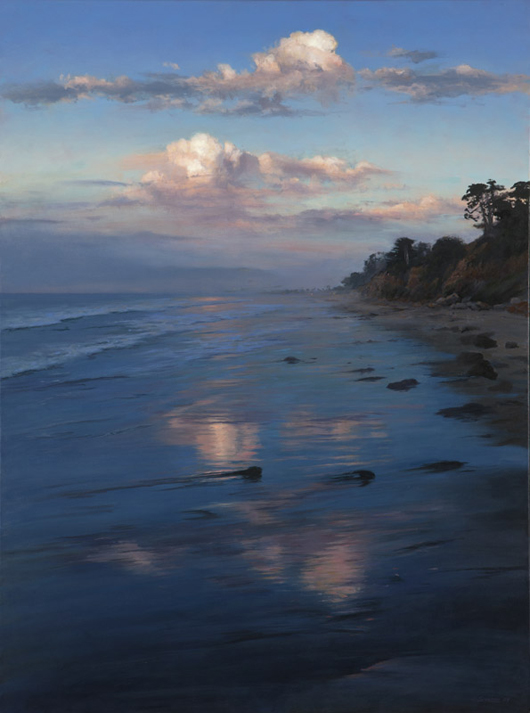