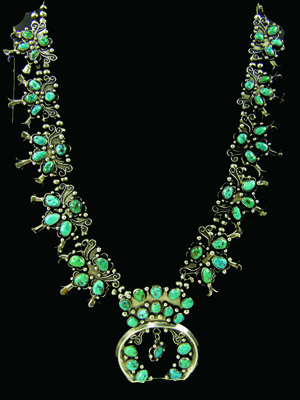 MESA, Ariz. – An outstanding collection of 40 hand-wrought, Navajo-made silver pill, jewelry and trinket boxes, many with turquoise stones and made between the 1930s and the 1980s, sold for $9,200 at Allard Auctions’ Big Spring Phoenix Auction, held March 8-9. LiveAuctioneers.com provided Internet live bidding.

The silver box collection was the top lot of the sale and contained 48 pieces overall. In addition to the boxes, the lot also featured two great canteens (one with coral), a small dish and five non-Indian pieces. The boxes came in various sizes and most boasted great patina. All had lids or covers. The largest two were signed by noted silversmiths “L. James” and “Suzie James.”

Over 800 lots of Native American art and artifacts came up for bid in an auction that grossed about $322,000. Between 100 and 125 people packed the house in person, while online bidding accounted for more than 500 registered bidders. Phone and absentee bids were also taken. In all there were about 300 successful bidders.

“There was a great deal of interest and excitement surrounding this sale way in advance of the actual event, and that told me it would be a huge success, which it was,” said Steve Allard of Allard Auctions. “It was one of our better auctions in the last two or three years. Just about all the major categories did well – jewelry, fine weave rugs, baskets, beadwork and unique items.”

Following are additional highlights from the auction. All prices quoted include a 15 percent buyer’s premium.

Many items sailed past estimates to bring high dollars – the hallmark of a successful auction. The silver box collection was expected to fetch only $2,000-$5,000. Also, a spectacular graduated green turquoise heshi strand necklace with fetish birds, bears and tear-drop extensions of turquoise and spiny oyster (est. $275-$550) ended up bringing $2,875.

Other overachievers included a large polychrome Acoma pottery jar by L. Concho, with classic floral motif in excellent condition, made circa 1978 (est. $400-$800) gaveled for $2,588; and an oversize Navajo turquoise and silver squash blossom Yellow Bird necklace set with about 200 carats of Morenci turquoise, beautifully crafted circa 1970s (est. $800-$1,600) garnered $2,750.

An early 20th century fully beaded ceremonial drumstick (Assiniboine/Gros Ventre), with a triangular drop and American flags in the design, in very good condition, made $1,840 against an estimate of $300-$600. Also a fine Navajo new wave storm pot, made circa 1990s by the renowned McKelvey Sisters, estimated at $500-$1,000), went for $1,955.

Hopi pottery jars, in particular, did well. A late 20th century Hopi olla by Hisi Nampeyo, with a flared rim and opposed polychrome parrot figures reached $1,035; while another Hisi Nampeyo example – a fine polychrome seed jar with four-way avian symbols, in very good condition and probably made around 1972, rose to $748.

A fine black-on-buff egg-shape Hopi pottery jar with bug and floral motif by the legendary Featherwoman (Silvia Naha), crafted in the late 20th century and in very good condition, breezed to $863, and another Naha creation, a fine polychrome-on-buff seed jar with a lizard figure and cornstalk on the shoulder, also in very good condition and made in the late 1900s, made $748.

An exceptional San Ildefonso blackware pottery plate by Maria & Santana, made circa 1960s, with feather designs and in superb condition, 10 inches in diameter, sold for $2,588. Also, a signed original pen and ink on paper work by Charles F. Lovato (1937-1987), depicting pottery and a stylized animal, circa 1972, 17 inches by 22 inches framed, made $805.

Rounding out just some of the auction’s top lots, a vintage flat beaded pictorial belt for a woman with sheep, a cow, horses and goat figures, made circa 1920 and measuring 6 inches by 36 inches, in very good condition, achieved $1,840; and a Navajo Two Gray Hills rug or weaving by Sadie Begay, done in beautiful earth tones and measuring 31 inches by 54 inches, gaveled for $1,725.

Allard Auctions Inc., which maintains its home office location on the Flathead Indian Reservation in St. Ignatius, Mont., has been selling exclusively American Indian artifacts and art at auction since 1968. The firm is always accepting quality merchandise for future auctions. To inquire about consigning phone 406-745-0500 or toll-free: 888-314-0343; or, email them at info@allardauctions.com. 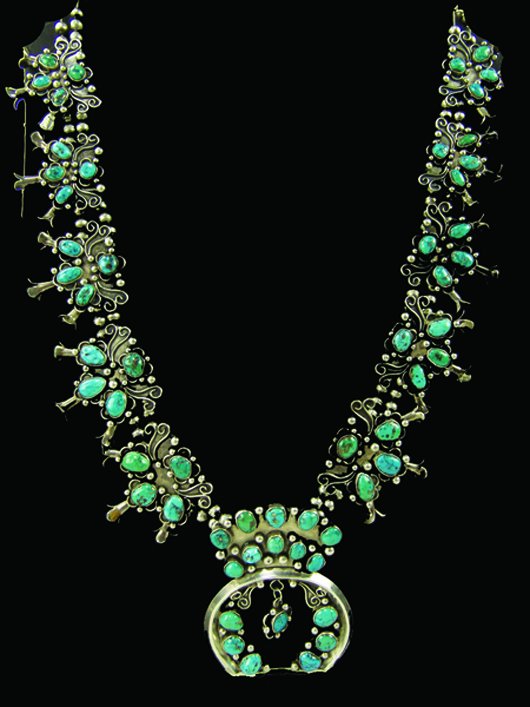 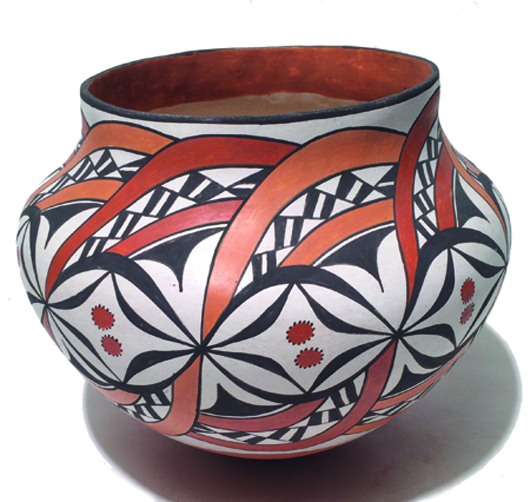 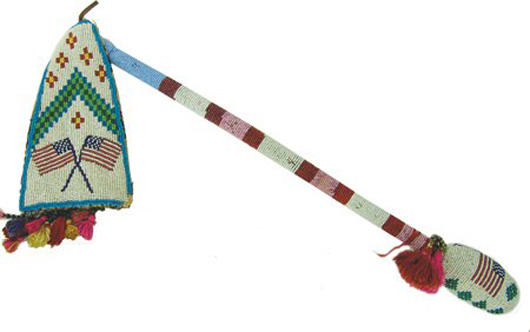 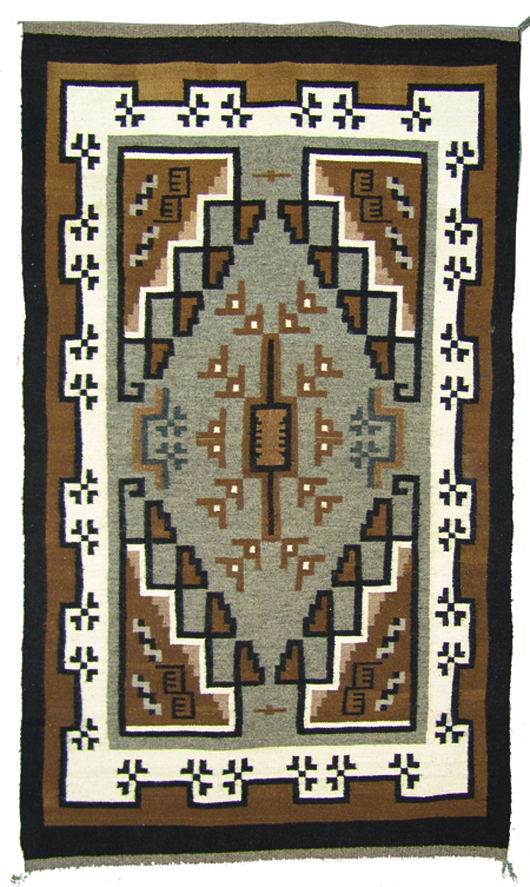 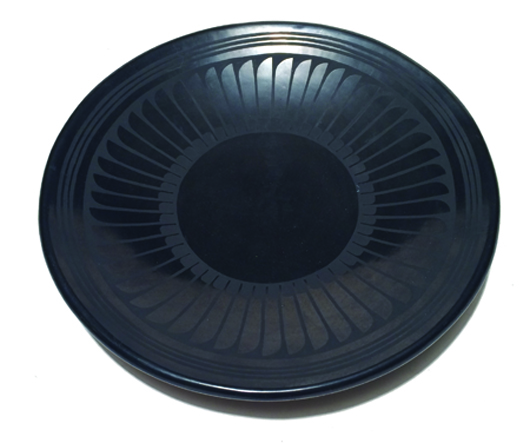 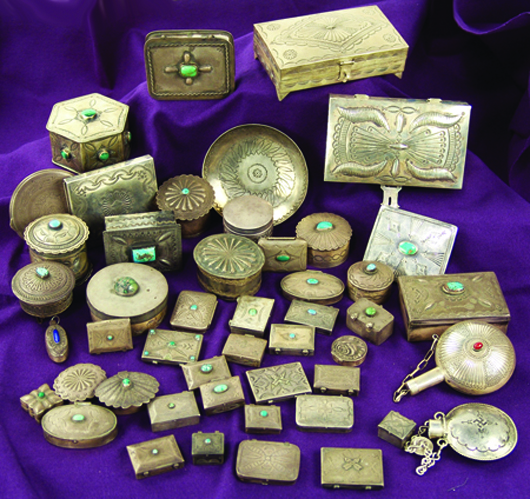 The top lot of the auction was a collection of 40 silver boxes, plus eight other items, which sold for $9,200. Allard Auctions Inc. image.