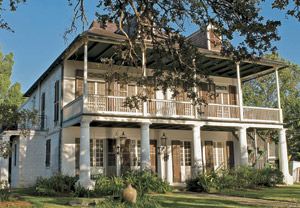 The auction took place on site, where registered bidders and their guests were encouraged to tour the home one last time while listening to live music, enjoying French King Cake and sipping mimosas. The 36 bidders, who were required to submit $50,000 in certified funds before participating in the auction, came from all over the region, including Alabama, Mississippi and Texas, and from as far away as Arizona, Georgia, Illinois, New Hampshire, and New York.

One bidder, an architect who flew in from Atlanta, commented via email after the sale that Neal Auction “made me feel so welcome and comfortable. The whole experience was quiet enjoyable! Thanks for everything.”

The event’s presiding auctioneer, Neal Auction Company’s president and co-founder Neal Alford, started the bidding at $100,000 and quickly proceeded upward from there. Competition was widespread throughout the room up to $750,000. At $750,000, only three contenders for the historic structure remained active; at $800,000, only two. From $800,000 to the final hammer price of $950,000, bidding was tense, with only two bidders left to compete for the property. To much applause, the auction closed at $950,000, with the gentleman from Houma being declared the winning bidder. A 10% buyer’s premium is added to the final bid price to arrive at the total contract sale price of $1.045 million.

The 2,900-square-foot home, located at 1300 Moss Street on Bayou St. John, had been vacant and on the market for more than five years before Neal Auction Company was contracted to sell it at absolute auction. There was no minimum or reserve.

An absolute auction, in which the seller agrees to sell to the highest bidder without a minimum or reserve, attracts more bidders than any other type of public auction, according to Neal representatives. Prospective buyers – knowing that the property will sell – turn out in greater numbers, resulting in competitive bidding which ultimately drives up the final sale price. The fixed-date sale effectively freezes the market, forcing the buyer pool to react or to forever lose the opportunity.

Over the past 26 years, the Neal Auction Company name has marketed some of the region’s most valuable assets. With countless world record prices achieved for fine art and antiques, Neal Auction can now add the Spanish Custom House to its venerable list of historic properties, which includes Houmas House – sold May 2003.

With a strong marketing campaign targeted at the historic and preservation minded, combined with a 167-page Property Information Packet (PIP) in which every pertinent detail of the house was appropriately cataloged, the Spanish Custom House Absolute Auction garnered considerable attention from across the country. In the weeks preceding the sale, Neal Auction received more than 140 serious inquiries, conducted 58 personalized property tours, and welcomed more than 1,000 visitors to the home when the doors opened to the general public for the 10-day preview period prior to the auction.

A veteran real estate auction participant and developer from Slidell, La., commented that Neal Auction’ Property Information Packet was the best he had ever seen and that “the presentation, marketing, quality of people and the handling of the auction were all superb.”

A local New Orleanian wrote a personal note after the auction saying “a note of thanks and appreciation for the personal service as well as the level of professionalism. It is always a pleasure to meet those that are exceptional at what they do.”