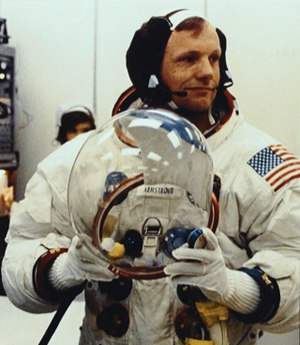 AMHERST, N.H. – The $10.50 check that astronaut Neil Armstrong wrote just hours before he and his Apollo 11 crew were launched on their famous flight to the moon has been auctioned for $27,350.

“I think it is incredible that this small check signed by Neil Armstrong has sold for such a fantastic price exactly 40 years to the day that it was signed,” said Bobby Livingston of RR Auction, the company that held a 17-day online auction of the check. Bidding lasted until 8 a.m. today.

The lot represents the most expensive single signed Neil Armstrong autograph ever sold, according to Anthony Pizzitola, vice president of the Universal Autograph Collectors Club, breaking the previous record of $19,000.

The check was purchased by Jack Staub, an engineer and business owner from Newport Beach, California.

“From an engineer’s (my) perspective, Armstrong rode the back of 10,000 years of human development,” Staub said.  “You can draw a straight line from the invention of the wheel to Edison and Einstein to this check, and then to Armstrong’s first step onto the moon. I feel quite humbled.”

Staub told the Boston Globe he had been prepared to pay as much as $40,000 for the astronaut memento. He said he plans to keep the check and “pass it on to my kids.”

RR Auction obtained the check through Noah Bradley, who bought it at auction from Harold Collins’ son George in 2004. George Collins told Bradley that on the morning of the launch, Armstrong realized that he owed Harold Collins, NASA Chief of Mission Support, $10.50. He made out the check and told Collins that it should be cashed ONLY if he died in space.

The only known Apollo-era check of Armstrong’s, its signature includes his middle initial and is one of only a handful of items signed in full by Armstrong, who has not given an autograph since 1994.

“This is probably the coolest Apollo 11 autograph in private hands,” Livingston said. “Here’s Neil Armstrong rocketing to fame, and he wanted to make sure that he paid his debts in case anything happened.”

RR Auction LLC recently auctioned the autographed photo of Albert Einstein with his tongue wagging for a record $74,340. Since its inception in 1976, RR Auction has published close to 350 consecutive monthly autograph catalogs, which are distributed internationally.

One-of-a-kind item from the first man on the moon, a personal check, 6 inches by 2.75 inches, filled out and signed in-full (including the rarely-seen middle initial), by "Neil A. Armstrong," payable for $10.50 to NASA official Harold Collins on the day of the Apollo 11 launch, July 16, 1969. Courtesy RR Auction. 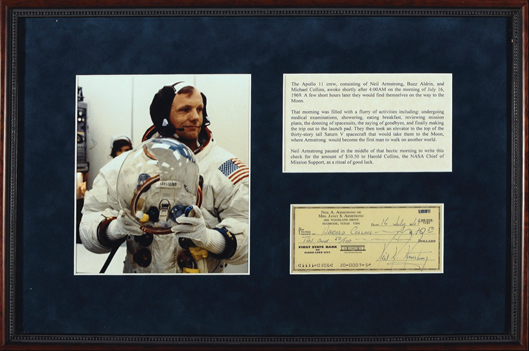