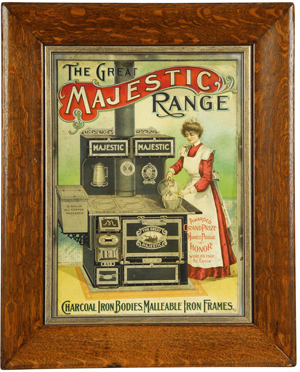 DENVER, Pa. – The most convincing proof that quality Americana finds its buyers in any market condition came on Oct. 8-10 at Dan Morphy Auctions’ Fall Sale, which featured the revered Joseph and Lilian Shapiro Americana and folk art collection. Internet live bidding was provided by LiveAuctioneers.com.

“The sale did over $1.5 million (inclusive of 15 percent buyer’s premium), and the usual factors came into play – rarity and condition,” said Morphy’s owner and CEO, Dan Morphy. “We specialize in genuinely fresh to the market collections that have been held for many years. When the quality is there and the antiques legitimately have not been available to the public for several decades, the collectors don’t hold back. They buy.”

Antique advertising signs, salesman’s samples and an extraordinary collection of decorative 19th-century folk art “bride sticks” (implements once used to push down laundry into washing water) generated tremendous presale interest. A beautiful 1890s paper sign advertising Soapine Soap, which previously had been displayed in the president’s office at Kendall Manufacturing in Providence, Rhode Island, hit the midpoint of its estimate at $17,250. “It was a rare and spectacular example,” Morphy noted.

Many other graphically appealing soap and laundry-related advertising signs in the Shapiro collection finished in the top 20. An 1890s bas-relief composition sign for Snow Boy Washing Powder, featuring a child clutching a box of soap and sledding downhill was bid well past its $7,000-$10,000 estimate to realize $15,000. A late-19th-century Magic Washer Soap sign depicting Uncle Sam with a proclamation reading “The Chinese must go!” exceeded its estimate to settle at $5,750.

Morphy said he was especially pleased to see adventurous participation from new buyers right alongside confident bidding from the more-seasoned collectors. “One man whom I did not know drove up from North Carolina specifically to bid on – and buy – an antique Pepsi-Cola sign,” Morphy said. The 27½-inch by 34-inch heavy cardboard sign from the early 1900s featured “Miss Pepsi-Cola,” a strawberry blond, turn-of-the-20th-century beauty dressed in a diaphanous gown and daintily holding a glass of the fizzy soft drink. Estimated at $7,000-$10,000, it was bid to $12,650.

No one “took a powder” when the talcum tins took the spotlight; in fact, there was unexpected interest from a new collector who made quite an impression as an absentee bidder. Morphy explained: “A New York buyer who is known for collecting something entirely different apparently took a shine to the collection of antique talcum, spice and other advertising tins in the sale. He ended up buying 183 lots. The established collectors for talcum tins, in particular, were blown away by the prices. Some had left bids in the $2,000 to $3,000 range for tins estimated around $600, and even then they didn’t get the tins.” An example was the 4-inch-high Yankee Talcum Powder tin with the image of a cherubic baby sprinkling powder on himself. Against a $1,000-$1,500 estimate, it climbed to $3,250.

Morphy said he intends to show his appreciation to the New York buyer by personally delivering the tins to him. “It’s just another way of helping to keep the auction business vibrant and strong,” he said. “I’ll personally deliver the purchased goods to anyone who spends $100,000 or more in one of my sales.”

The top lot of the sale was a J. & E. Stevens Girl Skipping Rope cast-iron mechanical bank. In all-original condition and consigned by the original owners, the highly desirable moneybox rated “excellent plus” had no trouble achieving $32,000 against an estimate of $18,000-$24,000. Leading the still banks was a circa-1902 example replicating the Battleship Iowa. Complete with all masts and lifeboats, and in near-mint condition, it sailed to an above-estimate $4,600.

Bidders gave in to temptation after they saw the superb condition of the antique and vintage toys offered in the sale, many of which came from the Carl Lobel collection. A Popeye tinplate Heavy Hitter with exceptional pictorial box was a strong contender at $8,000, as was the boxed B & R Charlie Chaplin mechanical walker, which also earned $8,000.

Oozing nostalgic charm, a circa-1949 Shelby boy’s blue and yellow bicycle with Donald Duck’s three-dimensional head perched below the handlebars was probably unused old store stock, judging by its near-perfect condition. It surpassed expectations to apply the brakes at $6,900.

Another depiction of Disney’s wacky duck, Donald, playing a xylophone for his flirty friend Donna Duck, was seen in the boxed, circa-1937 Fisher-Price pull toy. An extremely rare, near-mint example, it sold within estimate for $5,750.

The collecting momentum for antique marbles showed no signs of cooling, as a 2 7/16-inch cobalt blue and white onionskin Lutz described as “the rarest of the rare, and the only one known,” commanded top dollar at $8,050.

Yet another specialty category that held up well was vintage Halloween memorabilia. Topping the group was an 11½-inch German composition witch holding a wooden broom and jack-o-lantern. It ended its bidding run at $5,750 (estimate $2,000-$3,000). 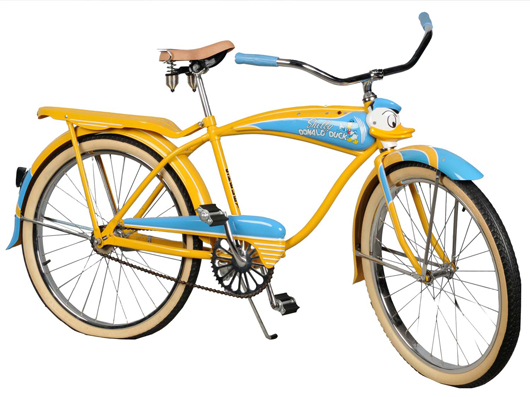 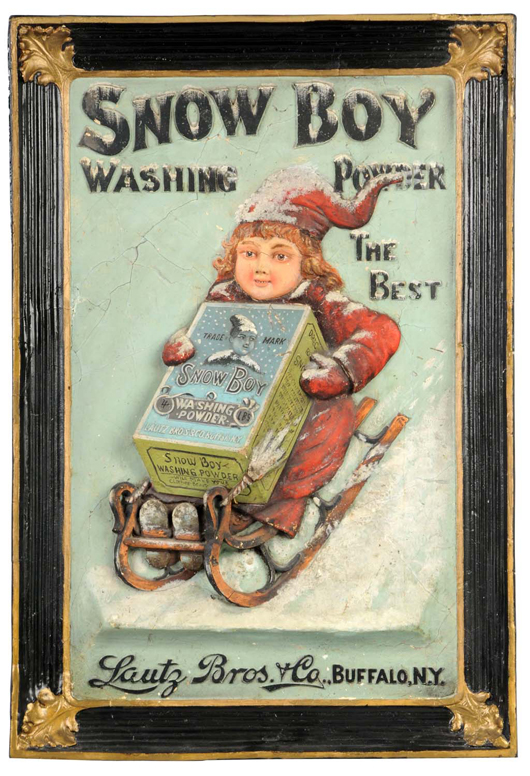 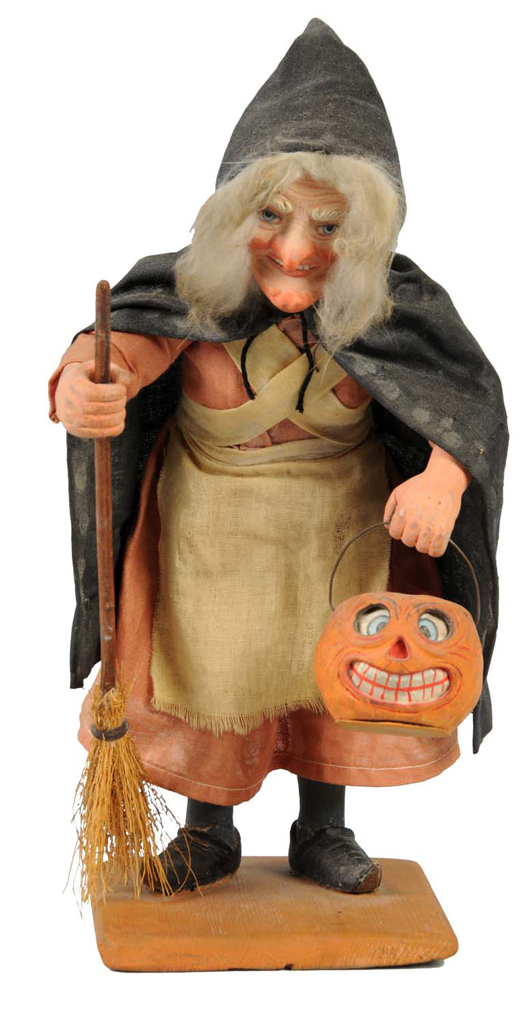 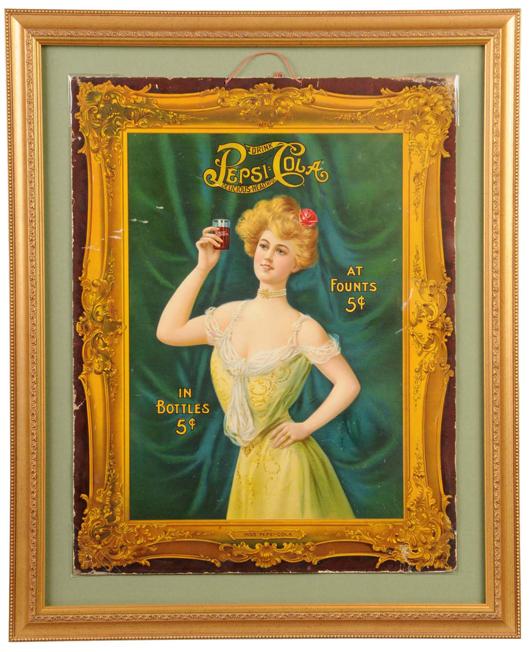 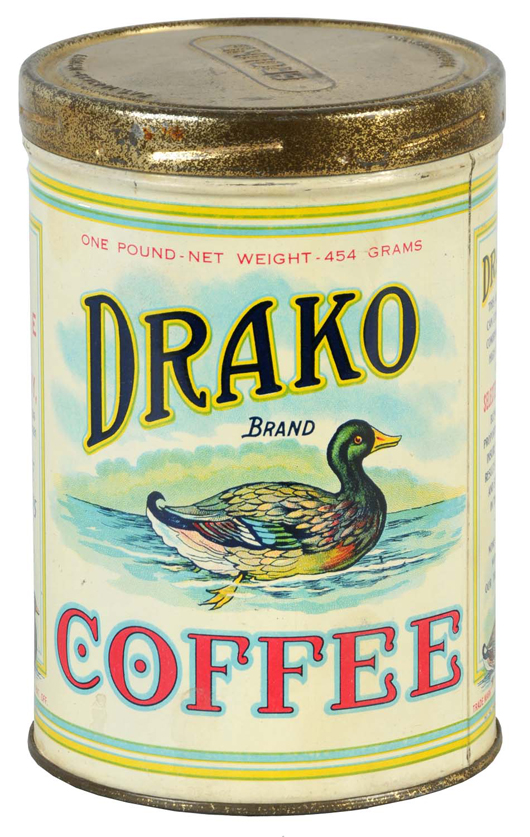 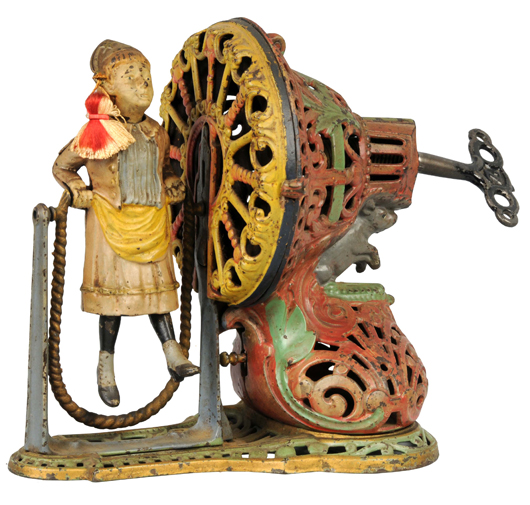 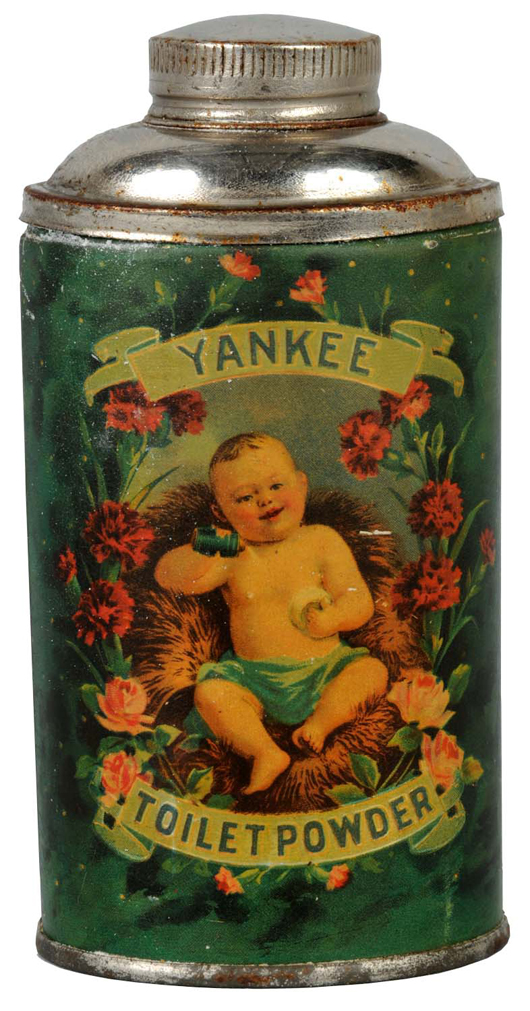 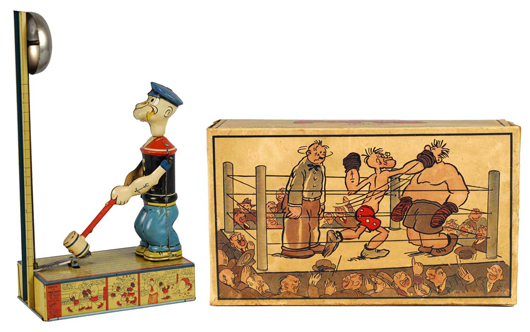 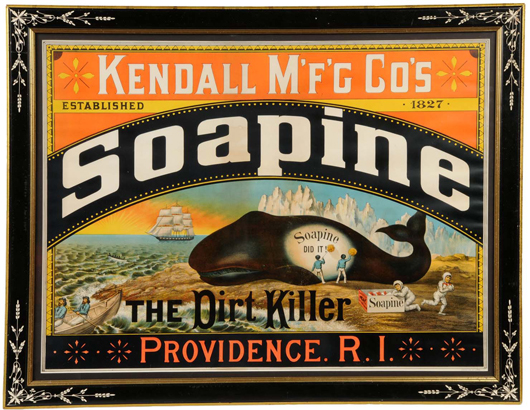