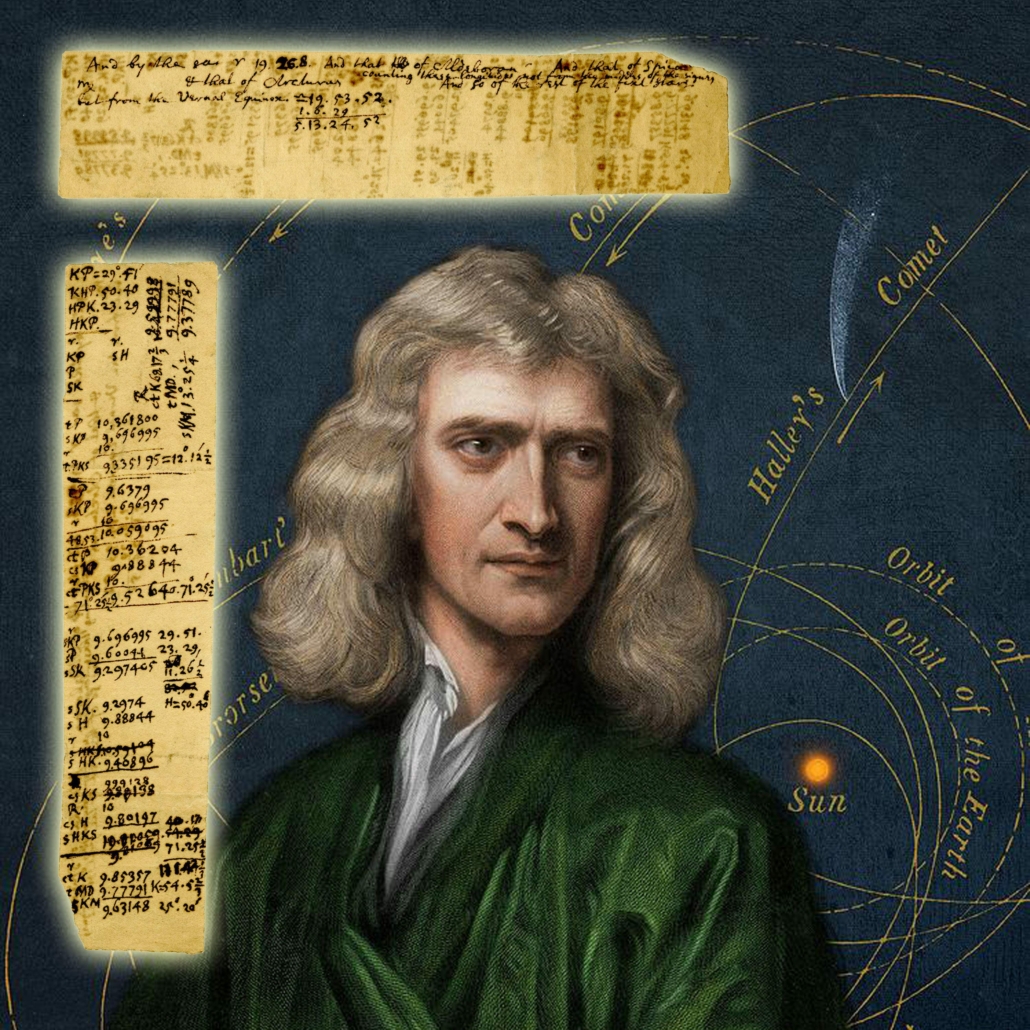 Two-page manuscript by Isaac Newton, which sold for $118,750 and top lot status

WILTON, Conn. – A manuscript penned by Sir Isaac Newton, with mathematical notes and calculations relating to Book III of his iconic scientific work Principia, changed hands for $118,750 in University Archives’ online-only auction of rare autographs, manuscripts, artwork, and comic art held on May 26. It was the top-selling item of the 409 lots in the sale.

“We’re still experiencing strong prices and keen new interests in many areas,” said University Archives president and owner John Reznikoff. “We’ve sold over three million dollars of items at auction so far this year, and we are not even at the halfway mark. This is another banner year.”

The two-page (front and back) manuscript, written by Newton circa 1715-1725, was believed to relate to Newton’s De Mundi Systemate, or Book III of the Principia. It was a set of mathematical notes containing several types of calculations and data points. One side was just calculations; the other side had a short note by Newton along with a calculation.

The text of the note reads, in part, “And that of Aldebaran and of Spica and that of Arcturus counting these longitudes not from the middes of the signes but from the Vernal Equinox/ And so of the rest of the fixed stars.” Newton was referencing the longitudinal position of Aldebaran and other stars, plus data points relating to his revolutionary study of comets.

Isaac Newton is widely recognized as one of the greatest mathematicians and most influential scientists of all time, and was a key figure in the scientific revolution. In Principia, he formulated the laws of motion and universal gravitation that formed the dominant scientific viewpoint, until it was superseded by Einstein’s theory of relativity. 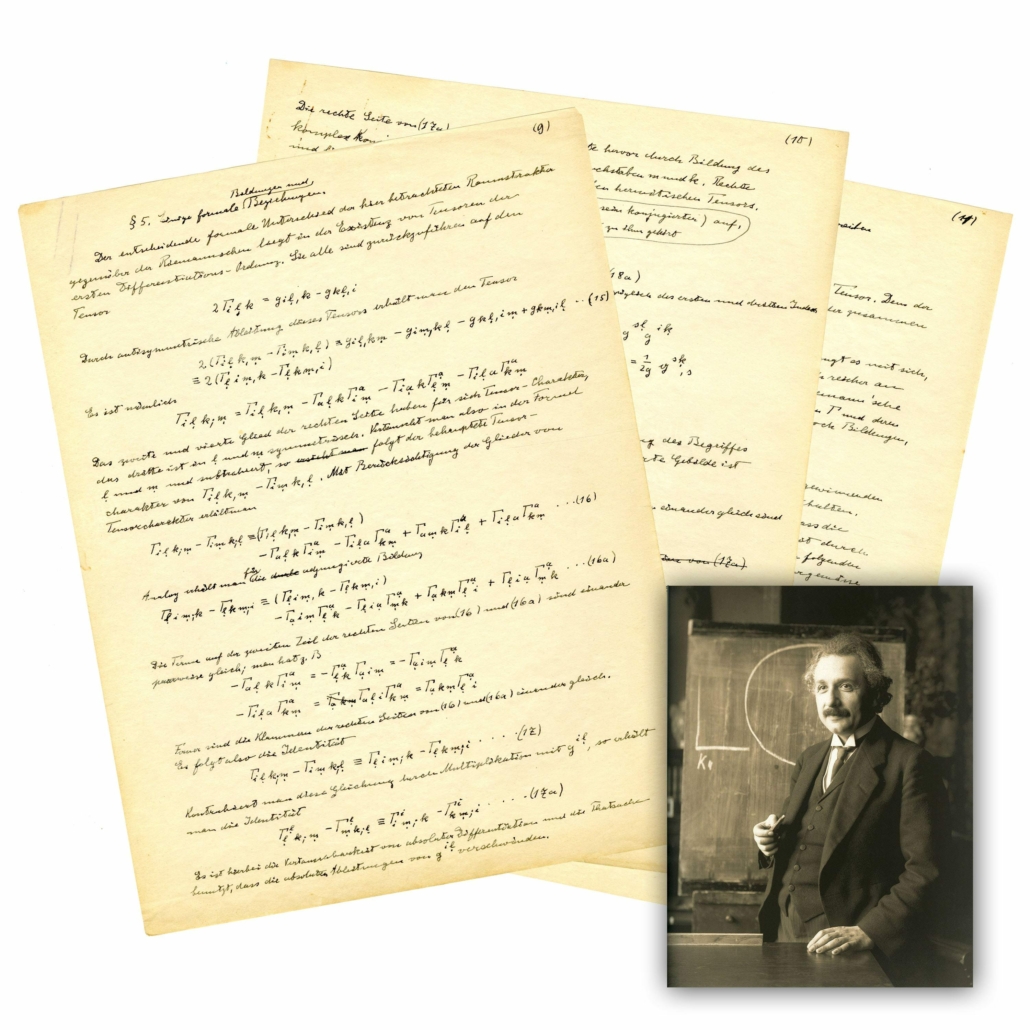 Items pertaining to Newton are exceedingly rare and highly sought after by collectors. The last time a Newton Principia-related autograph manuscript came on the market was October 1999 and, before that, 1991 and 1979. Newton was a notorious hoarder of paper and of his own manuscripts; the preservation of this manuscript note was unusual even for him. 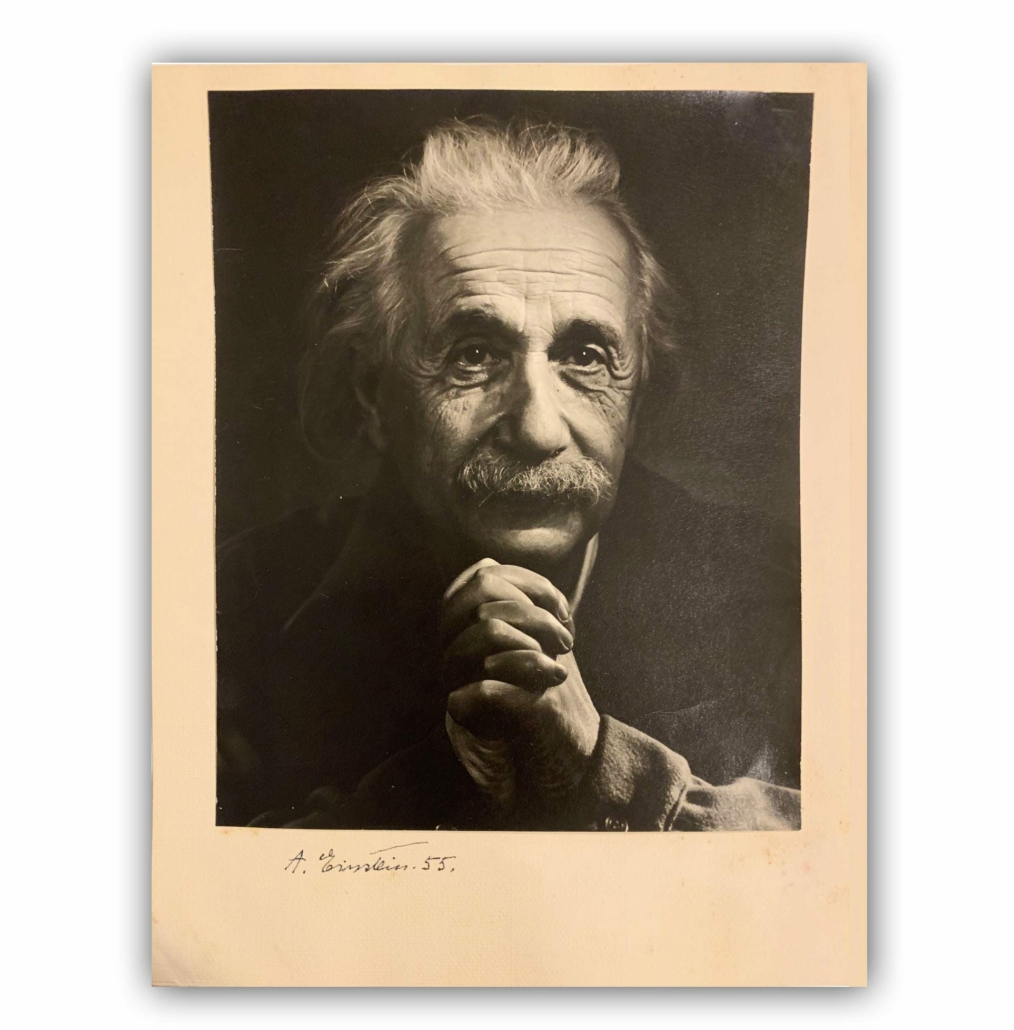 Photograph of Einstein by Yousuf Karsh, which sold for $34,375

Items in the sale relating to Albert Einstein included a three-page 1940s scientific manuscript pertaining to his Unified Field Theory, which featured the sentence, “I want to try to show that a truly natural choice for field equations exists.” It sold for $68,750. Also performing well was a black and white photo signed by Einstein, taken in 1955–the year of his death–by photographer Yousuf Karsh, who said the image reveals the “brief moment when all there is in a man’s mind and soul and spirit are reflected through his eyes, his hands, his attitude.” It realized $34,375. 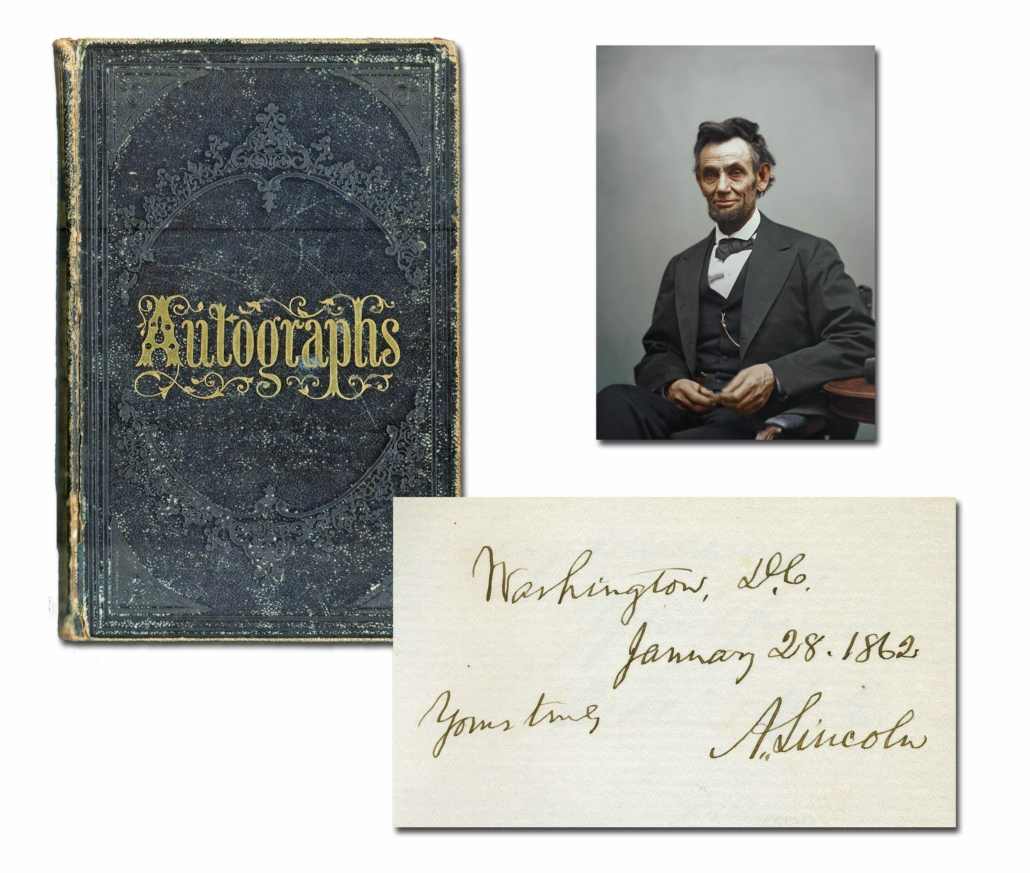 A Victorian autograph album compiled by Pennsylvania Congressman William M. Davis that contained 226 signatures of Lincoln administration officials as well as members of the 37th U.S. Congress, including President Abraham Lincoln; seven of his eight cabinet members (Hamlin, Seward, Chase, Bates, Welles, Cameron and Smith); and the autographs of about 217 statesmen, including Lincoln’s eventual successor, Andrew Johnson, sold for $37,500. 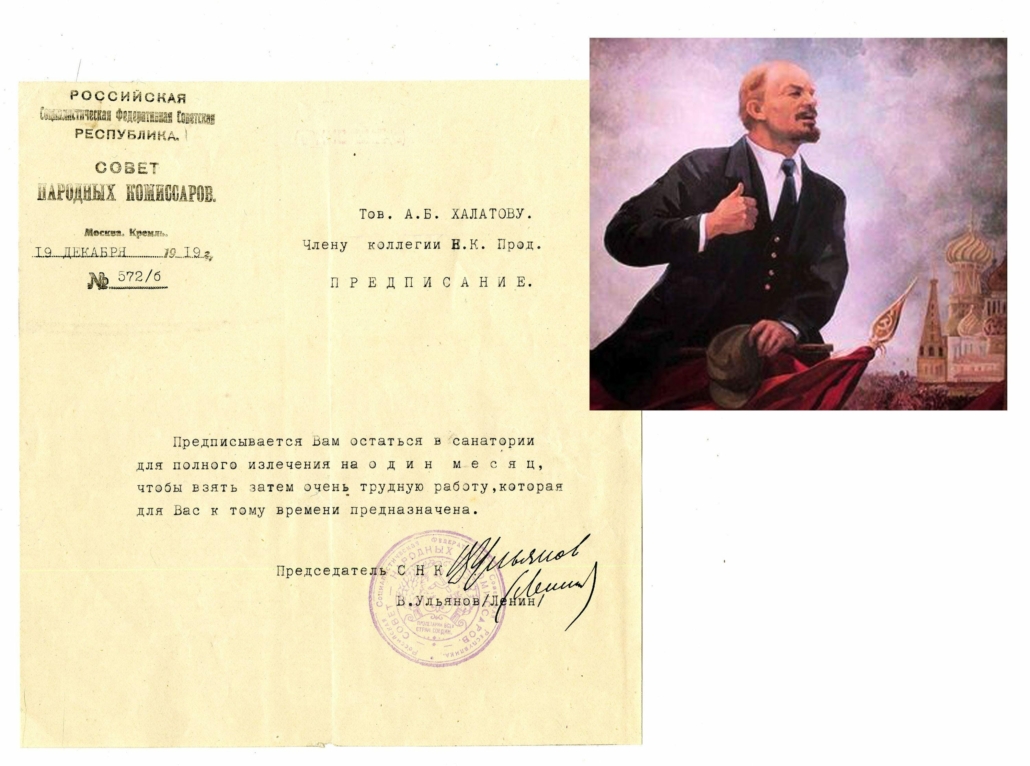 A typed letter signed by Vladimir Lenin as Chairman of the Workers’ and Peasants’ Defense Council during the Russian Civil War, and addressed to a future victim of Stalinist Purges, the People’s Commissariat Artemic B. Khalatov, sold for $25,000. The letter, dated Dec. 19, 1919, was in Russian and typed in the Cyrillic alphabet. Lenin wished Khalatov a speedy recovery and a swift return to work. Ironically, Lenin’s successor, Josef Stalin, later ordered Khalatov’s execution. 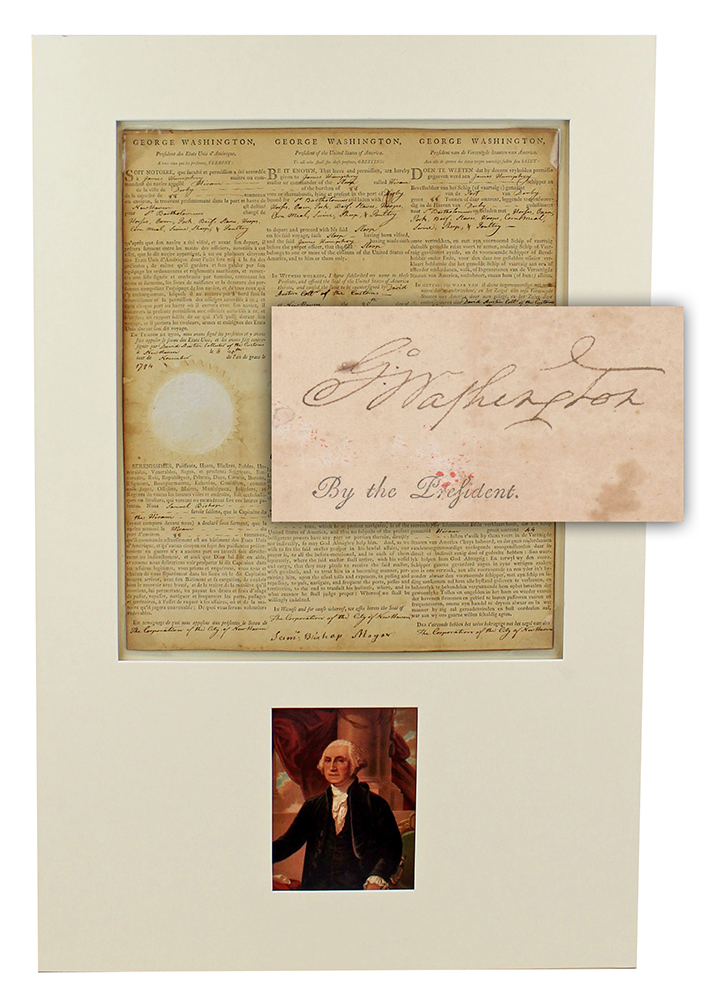 Ship’s paper printed in three languages and signed by President Washington, which sold for $15,000

A one-page, partly printed ship’s paper dated Nov. 25, 1794, printed in three languages, boldly signed by George Washington as president, and issued to “James Humphrey master or commander of the Sloop called Hiram,” brought $15,000. Also, an autograph letter signed by Woodrow Wilson as president on White House stationery, dated May 19, 1913 and addressed to author and editor James Grant Wilson regarding the dedication of a U.S.S. Maine monument, realized $13,750. 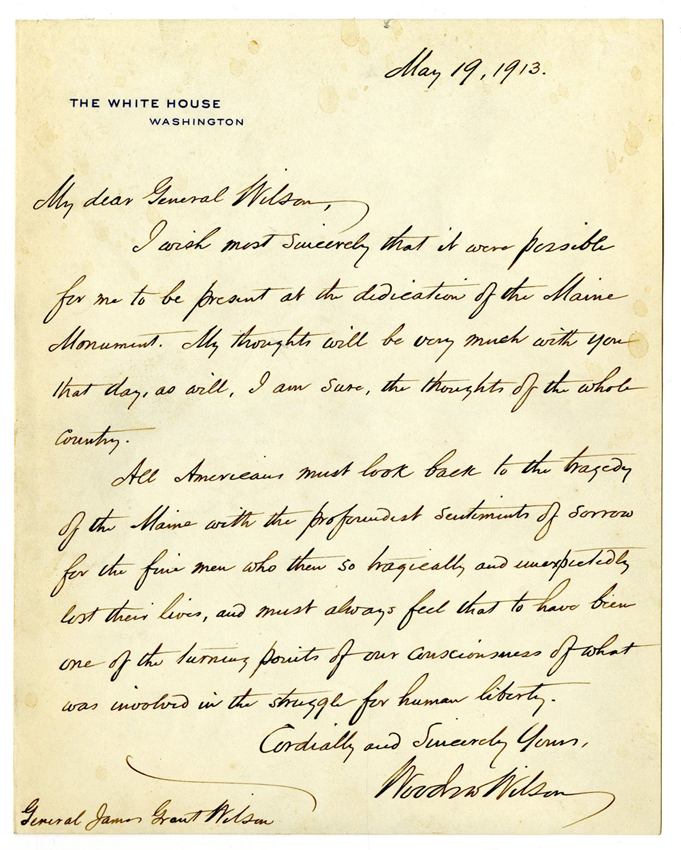 President Wilson letter from 1913 on White House stationery, which sold for $13,750

An Act of Congress signed in type by George Washington as President and John Adams as Vice President on May 8, 1794, permanently establishing the U.S. Postal Service and making robbing the mails a crime punishable by death, rose to $12,500. Also, a one-page autograph letter signed by the prominent British Methodist preacher John Wesley, written at Derby, England on July 12, 1788 with content regarding a children’s school, sold for $5,938. 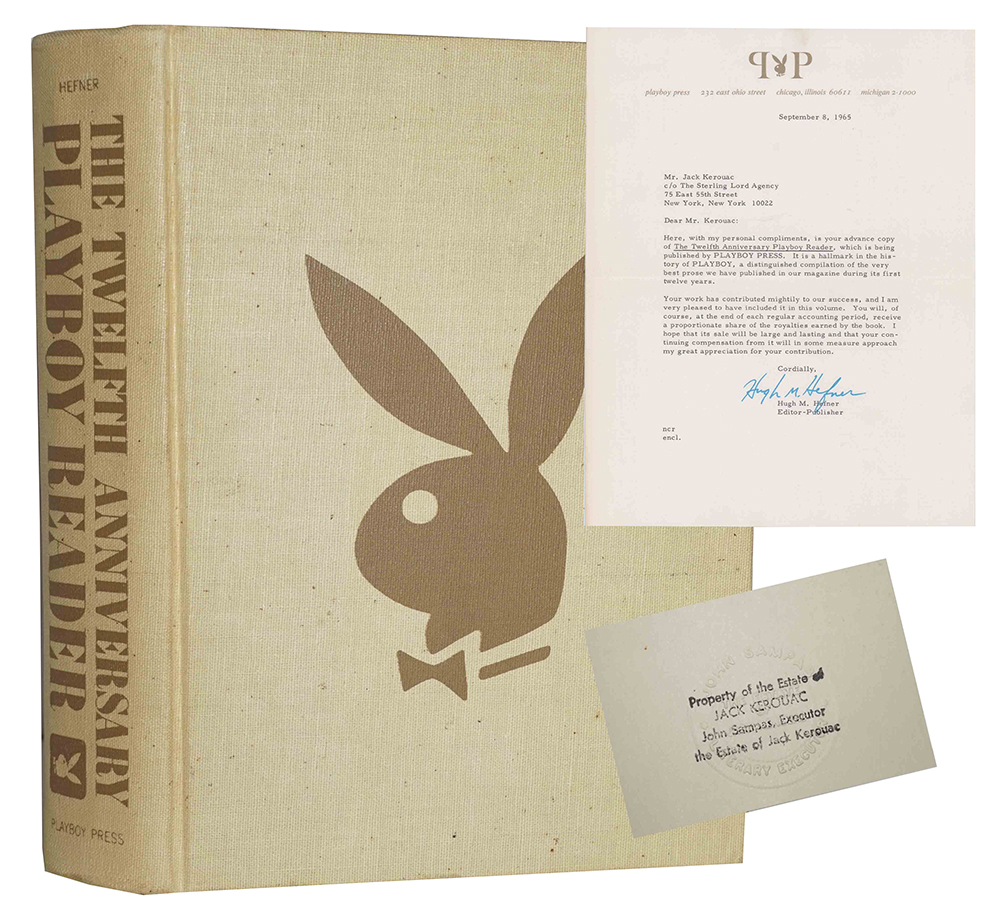 A two-page letter typed and signed by author J.D. Salinger as “Jerry”, dated May 5, 1972, in which he offers his thoughts on a dating interest of a friend and aspiring writer, Eileen Paddison reached $8,125. Also, Beat writer Jack Kerouac’s personal advance 1965 copy of The Twelfth Anniversary Playboy Reader, given to Kerouac, a contributor, by Hugh Hefner, and accompanied by a typed letter signed by Hefner, hit $8,125. 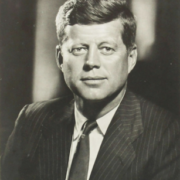 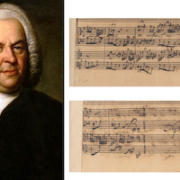 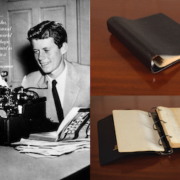 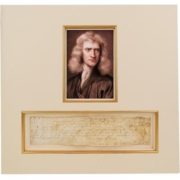 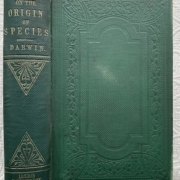 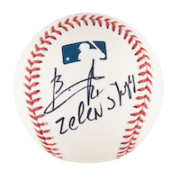