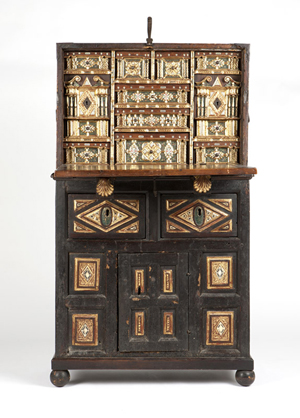 Dated to the 18th century, or possibly earlier, this Spanish wrought-iron mounted vargueno, a cabinet-desk with fall front, found popularity among online buyers, earning a final price tag of $11,637.50, well over the $3,000 to $5,000 estimate. John Moran Auctioneers image

PASADENA, Calif. – The diverse offerings at John Moran Auctioneers’ Nov. 18 auction spanned an array of themes, decorative categories and countries of origin, including Continental silver, decorative arts, and furniture, American and Mexican silver, Modern prints and European paintings, Native American weavings and basketry, and Asian porcelain. The array of selections brought a large number of interested bidders to peruse the lots in person before bidding from the sales floor, an even larger number of Internet bidders.

All sales figure include an approximately 20 percent buyer’s premium. Highlights were varied and some unexpected bidding wars ensued, however, Continental paintings, prints by Rufino Tamayo, and Tiffany’s Lap Over Edge flatware were in decidedly high demand.

Moran’s November catalog included a fabulous collection of Tiffany & Co. sterling silver flatware in the Lap Over Edge pattern. Patented in 1880 and phased out circa 1934, the iconic Lap Over Edge flatware features acid etched and engraved designs of flora and fauna, and was meant to be assembled so that no one piece had the same design as another in the set. The Nov. 18 auction catalog featured 25 lots of Lap Over Edge in total (24 of which hailed from a single Southern California estate); each brought a selling price well within or above estimate, many going to a single private collector. A set of dinner knives and forks for 12, featuring handles decorated with sea creatures and flowers, earned $5,700 – within the estimate of $4,000 to $6,000. Shortly after, a set of Lap Over Edge fish knives and forks, also for 12, each decorated with aquatic motifs, brought $7,200, equating to $300 per piece (estimate: $4,000- $6,000).

Mexican silver also proved enduring popularity with collectors. Three Hector Aguilar Aztec pattern sterling silver serving pieces, dated to 1955 – 1962, sold for $815.75 to an online buyer (est: $300 to $500). A hand wrought sterling silver flatware service for six by William Spratling, decorated with applied disks and bands of wrapped silver wire was assigned an estimate of $7,000 to $9,000, which was exceeded when the set sold to a Southern California collector for $11,400.

Select fine artworks earned stellar prices at the block. A work in oil on canvas by Dutch painter Jan Frederik Portielje (1829-1895), depicting an aristocratic woman feeding a finch, incited a bidding war between Internet bidders; the work finally sold for $9,840 to an Internet bidder via LiveAuctioneers (estimate: $4,000-$6,000). One of three portraits of Kinmont Hoitsma featured in the catalog, each executed by his former partner, artist Cecil Beaton (1904-1980 British) was a moody oil on canvas in subdued green, blue and purple hues. Expected to find a buyer for between $1,500 and $2,000, the painting went for $3,900. Paris Au Printemps by French painter Edouard Cortes (1882-1969), depicting pedestrians and carriages braving a rainy day before the Arc de Triomphe, carried an estimate of $20,000 to $30,000. The work just exceeded expectations, going to an online bidder for $33,825. A charcoal drawing by renowned South African artist Irma Stern (1894-1966) also created a stir among Internet bidders. Executed in 1945 (possibly during the artist’s trip to Zanzibar in that year), the drawing depicts a seated, draped woman, and sold online for $2,250 (estimate: $2,000 to $3,000). Late in the sale, a number of lithographs by Mexico-born modernist Rufino Tamayo achieved excellent sale prices. Indicative of the group, one work titled Hombre, estimated to earn $2,000 to $3,000, found a new home with a floor bidder for $2,756.

Small Continental decorative items offered some great highlights, including a pair of Bohemain cranberry lusters, which proved popular online. Decorated to reserves around the castellated rim with female portraits (a somewhat rare decorative element for such items), this piece was assigned a conservative estimate of $1,500 to $2,000, which was surpassed when the lusters sold for $3,000. One of a number of clocks in the auction, a Napoleon III gilt-bronze mantel clock stamped for maker Henri Picard (French, 1840-1890) featuring a spherical clock face and two lounging putti earned $5,020 at the block (estimate: $3,000-$5,000). Four lots composed of various sizes of charming porcelain pugs were offered in this auction – one lot included four figures by Meissen in a range of size and postures; the lot sold for $1,440 (estimate: $400 to $600). A jeweled Royal Vienna-style plate, hand-painted to the central reserve with diaphanously draped seated beauties, sold for $2,040 (estimate: $1,000- $1,500). While apparently unsigned, two cased miniature portraits on porcelain drew great attention from buyers across the United States and beyond. Inspiring a small bidding war between Internet bidders, the lot brought an impressive $2,280 (estimate: $800-$1,200).

Select furniture items brought interested parties out in force to the sales floor, including a Spanish wrought-iron mounted vargueno, which dates to the 18th century or earlier. Beautifully polychrome painted with bone inlay and gilt highlights, the piece was assigned a $3,000-$5,000 estimate, with a floor bidder casting the successful high bid, totaling $11,637.50. Pieces in the elegant Louis XVI style earned strong prices, such as the French gilt bronze-mounted mahogany vitrine attributed to celebrated cabinetmaker Francois Linke (1855-1946). While unsigned, the high level of craftsmanship helped push the sale price to $4,200 (estimate: $2,500-$4,000). A handsome pedestal clock, based on the model housed in the Empress Eugenie’s study during the reign of Napoleon III, with mounts signed by Louis-Auguste-Alfred Beurdeley (1805-1882 French), earned a $60,000 price (estimate: $30,000-$50,000). Sure to make a striking addition to one online buyer’s private collection, a Louis XVI-style gilt-bronze mounted marquetry table sold for $2,337, just over the $1,500 to $2,000 estimate.

Hand-painted Berlin KPM plaques never cease to excite buyers at John Moran Auctions. One such example, depicting a full-length portrait of Queen Louise von Mecklenburg-Strelitz of Prussia (after the work by early 19th century German artist Gustav Richter) was expected to sell between $5,000 and $7,000. The piece sold for $11,025.

Late in the auction, the sale of a highly anticipated late Classic Period Navajo child’s wearing blanket inspired a number of interested parties to bid via telephone. One such telephone bidder was the successful high bidder, taking ownership of the raveled American flannel and indigo-dyed green wool textile for a total of $19,200 (estimate: $5,000-$7,000).

Any questions or inquiries may be directed to: info@johnmoran.com or to Moran’s offices via telephone: 626-793-1833. 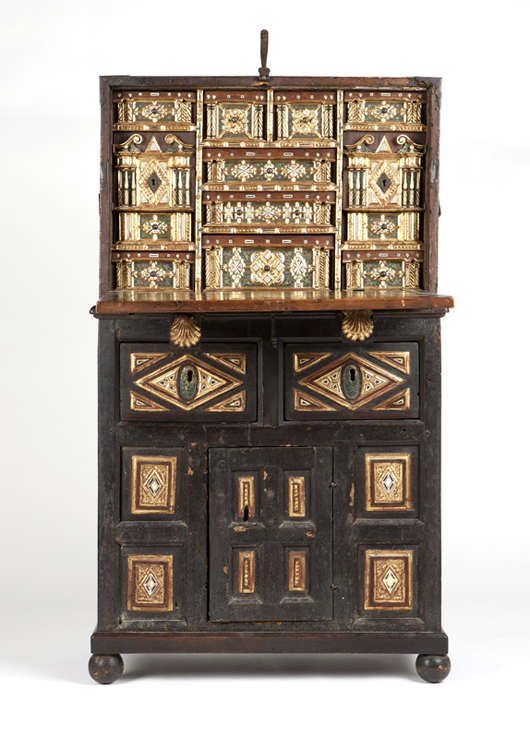 Dated to the 18th century, or possibly earlier, this Spanish wrought-iron mounted vargueno, a cabinet-desk with fall front, found popularity among online buyers, earning a final price tag of $11,637.50, well over the $3,000 to $5,000 estimate. John Moran Auctioneers image 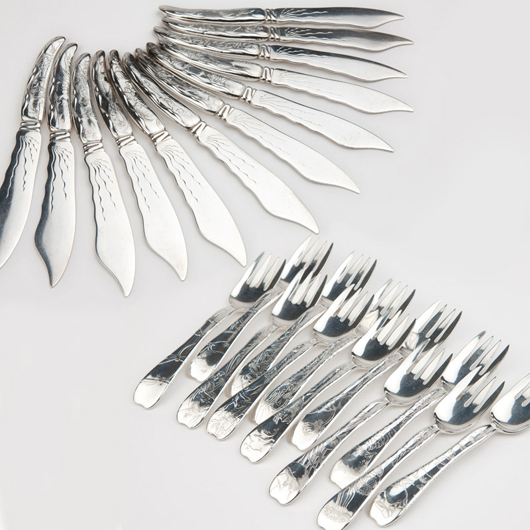 One of 25 lots of Tiffany & Co.’s Lap Over Edge flatware, this set of fish forks and knives for 12 brought $7,200, equaling $300 per piece in the set. John Moran Auctioneers image 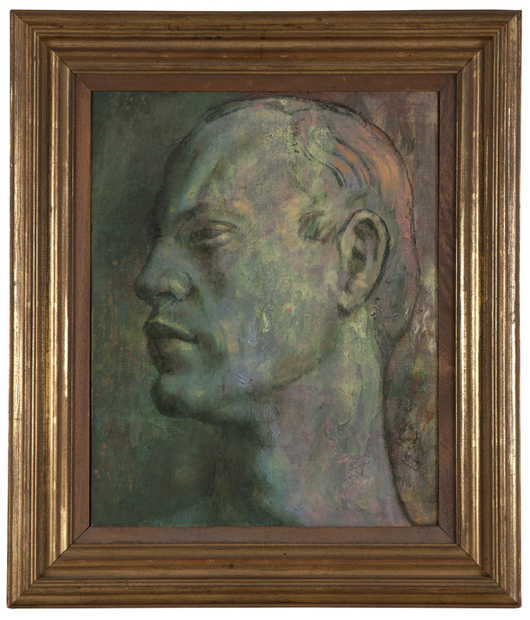 This portrait of American-born Olympic fencer and English literature teacher Kinmont Hoitsma by his partner, British artist Cecil Beaton (1904-1980), was expected to bring $1,500 to $2,000; the painting sold for $3,900. John Moran Auctioneers image 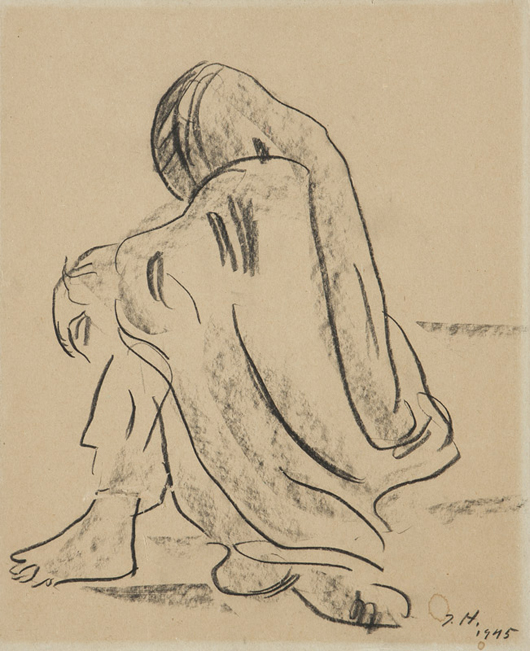 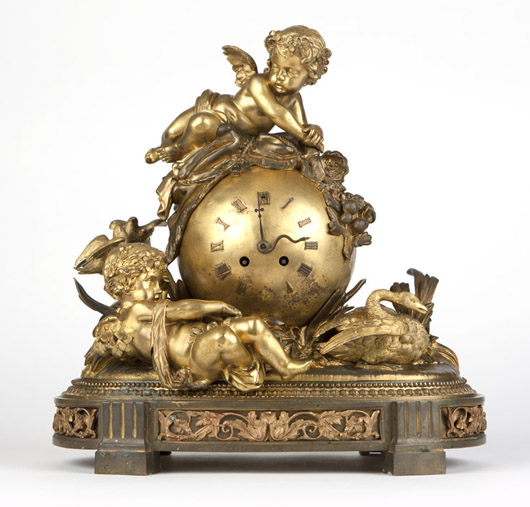 This Henri Picard clock in the Napoleon III style was assigned an estimate of $3,000-$5,000, and brought $5,020. John Moran Auctioneers image 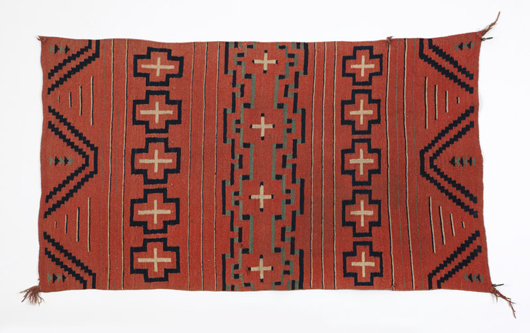