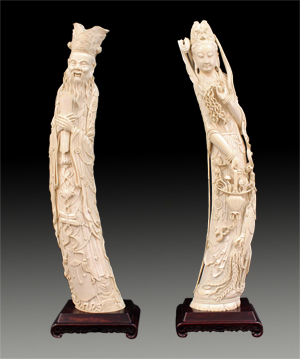 This pair of exquisitely carved Chinese antique ivory figures was sold as one lot for $45,000. Ahlers & Ogletree image.

ATLANTA – A pair of exquisitely carved and detailed Chinese antique ivory tusk figures on fitted rectangular bases sold as one lot for $45,000 at a New Year’s auction held Jan. 4-5 by Ahlers & Ogletree. The tusks were the top lot in a sale that grossed a little over $1 million. LiveAuctioneers.com provided Internet live bidding.

The monumental figures – one of a man, one of a woman, each 35 3/4 inches tall – were depicted at full length and in the round. One showed an emperor with a long wavy beard holding a document in his hands. The other figure was of an empress with eyes closed, holding a ribboned item in one hand and a basket of flowers in the other. Both had a storage box.

Headlining the auction was the collection of Mr. and Mrs. Thomas and Marie Patton of Atlanta.

“New Year’s auctions tend to be strong and this one was no exception,” said Robert Ahlers of Ahlers & Ogletree. “It was refreshing to see such vigor on the part of the bidders. There was a lot of energy, both in the room and online, and I attribute that to the fresh estate merchandise in the auction. That always leads to spirited bidding and we sure had plenty of that.”

Following are additional highlights from the auction. All prices quoted are hammer, exclusive of a sliding scale buyer’s premium.

An antique hand-woven serapi rug, made circa 1900 and measuring about 9 feet by 14 feet, brought $15,000. A 1921 Steinway & Sons Music Room Model A baby grand piano in an ebonized satinwood case and with a leather tufted piano bench fetched $12,000. A large 19th century French sofa with carved gilt wood undulating frame in the Louis XVI style hit $10,000.

Original artwork did well across the board. A late 16th century oil on canvas work after Michelangelo de Caravaggio (Italian, 1571-1610), titled The Lute Player, 1597 and depicting a bust portrait of a boy musician rose to $13,000; and a finely rendered 19th century Italian School oil on canvas of an active Venetian carnival festival in the manner of Tiepolo breezed to $14,000.

An oil on copper panel depiction of a man with a white beard in knight’s armor in an outdoor setting by Charles-Emile Auguste Carolus-Durand (French, 1837-1917), titled Homme en Armure (Man in Armor) sold for $8,000; and a monumental oil on canvas painting of three nude female beauties as nymphs by Jules Victor Verdier (French, 1861-1926), titled Nymphs, hit $10,000.

In the watches and jewelry category, a Rolex Oyster Perpetual Submariner two-tone watch with a 3-carat diamond bezel around a black face, with a stainless steel watch band, gaveled for $8,500; and an 18-inch-long, 18K yellow gold and diamond necklace with two panther (or leopard) heads with mouths clamped around a diamond-mounted circular ring realized $6,250.

Two very different tables each generated much bidder interest. One was a 17th century clockworks constructed from hand blacksmithing, possibly taken from an Italian church and later converted into the base for a rectangular glass-top table ($7,250). The other was an Italian marble table with round dentate patterned top, urn-shaped pedestal and three paw feet ($5,500).

Returning to fine art, an oil on canvas depiction of Still Life With Pears, Apples and Sunflower by British painter Gerald Cooper (1899-1974), 20 inches by 24 inches less the frame, knocked down at $6,000; and a 19th century Continental School four-panel folding screen hand-painted with an idyllic fictitious landscape, each panel 83 inches by 24 inches, sold for $5,500. 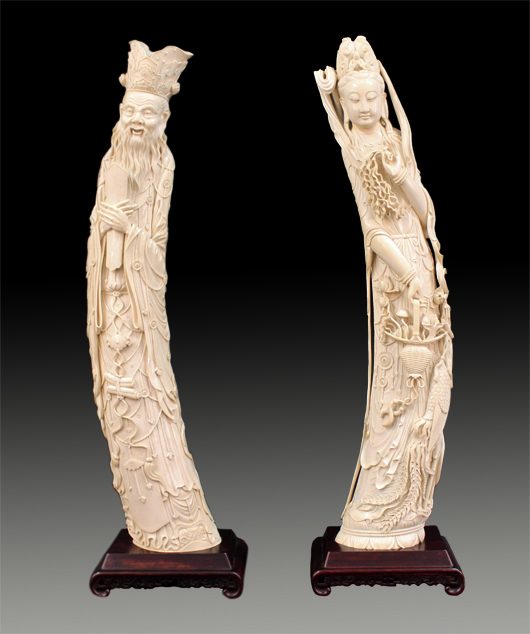 This pair of exquisitely carved Chinese antique ivory figures was sold as one lot for $45,000. Ahlers & Ogletree image. 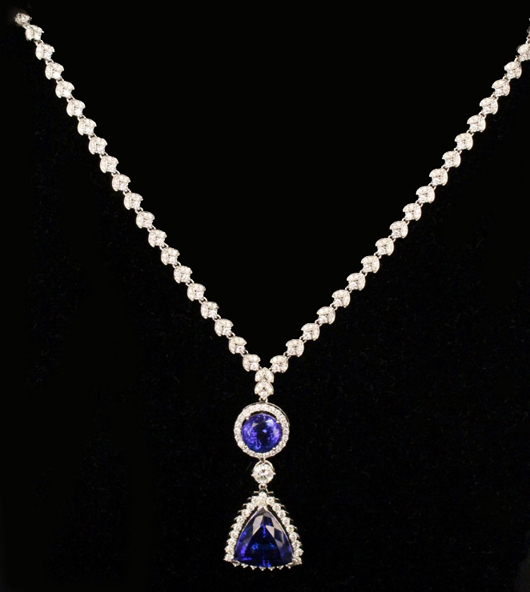 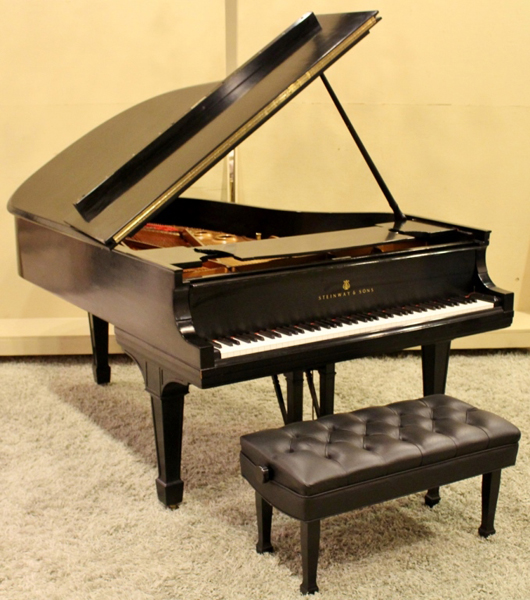 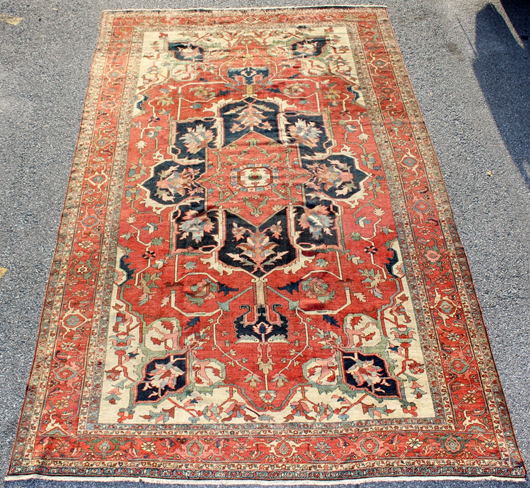 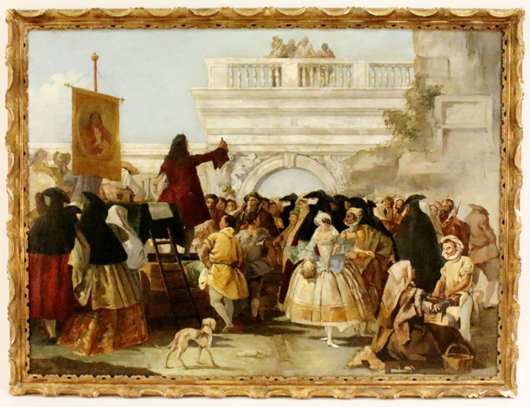 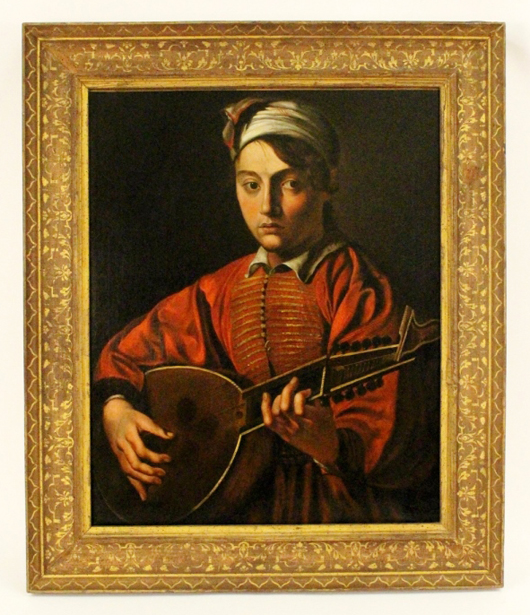 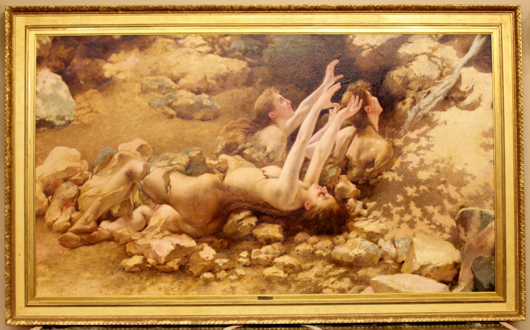