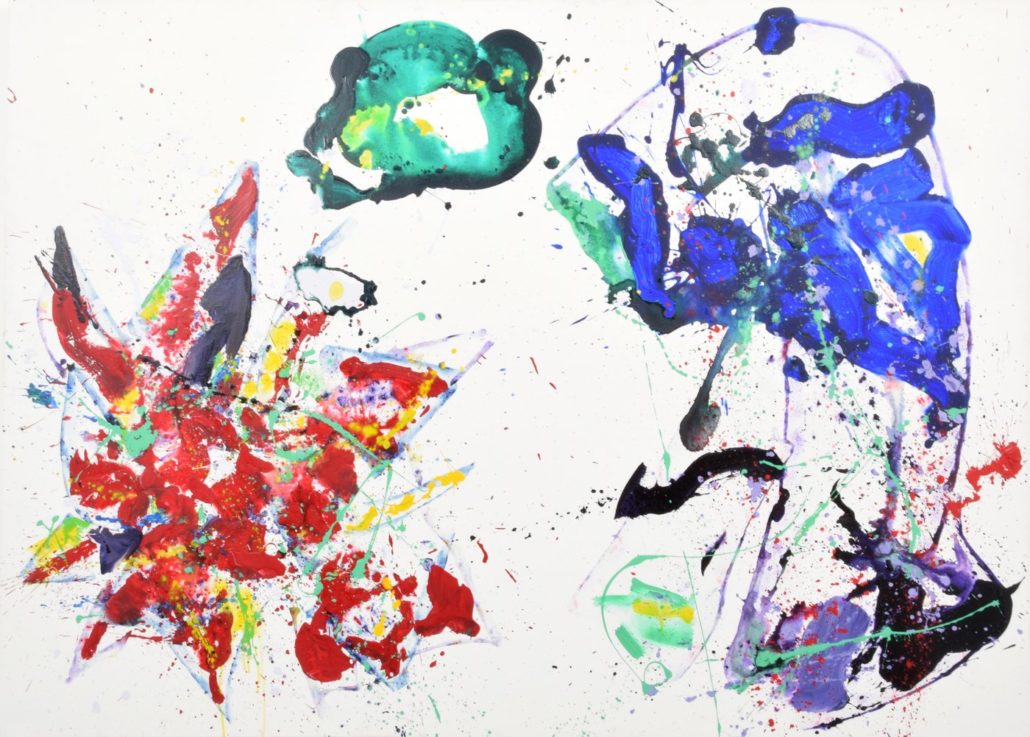 WEST PALM BEACH, Fla. – May 6th was a stellar day for Palm Beach Modern Auctions’ (PBMA) co-owners Rico Baca and Wade Terwilliger. Not only did their 492-lot offering of blue-chip modern art, design and luxury goods set a house record for a one-day auction – $1.9 million – it also showcased an important Sam Francis painting that ended up being the most expensive item ever to cross the PBMA auction block. The vibrant canvas sold for a buoyant $603,250 (all prices quoted inclusive of 27% buyer’s premium). Absentee and Internet live bidding was conducted through LiveAuctioneers.com.

Pictured above, the Francis painting, a major acrylic-on-canvas titled Quiet Fruitfulness, was created in 1987, seven years before the internationally acclaimed California artist passed away. Measuring 60½ by 80½ inches, the work retained a 1988 Knoedler Gallery (London) label on verso and came with a copy of the sales receipt from the gallery as well as a conservator’s condition report. It is also listed in the Sam Francis Catalogue Raisonne that was published by the University of California Berkeley Press in 2011.

“But the icing on the cake, in terms of provenance, was the letter we received from the Sam Francis Foundation prior to the auction that confirmed the painting had been added to their official archival record,” said Baca. “They had been looking for this painting, which had been out of the public eye for many years, so they were happy to learn of its whereabouts and we were thrilled to bring it to the marketplace – a win-win all around.”

The Sam Francis painting was “a magnet for art dealers,” Baca said. “There were many who commented during the preview or at private viewings that it was a great example of his work.” 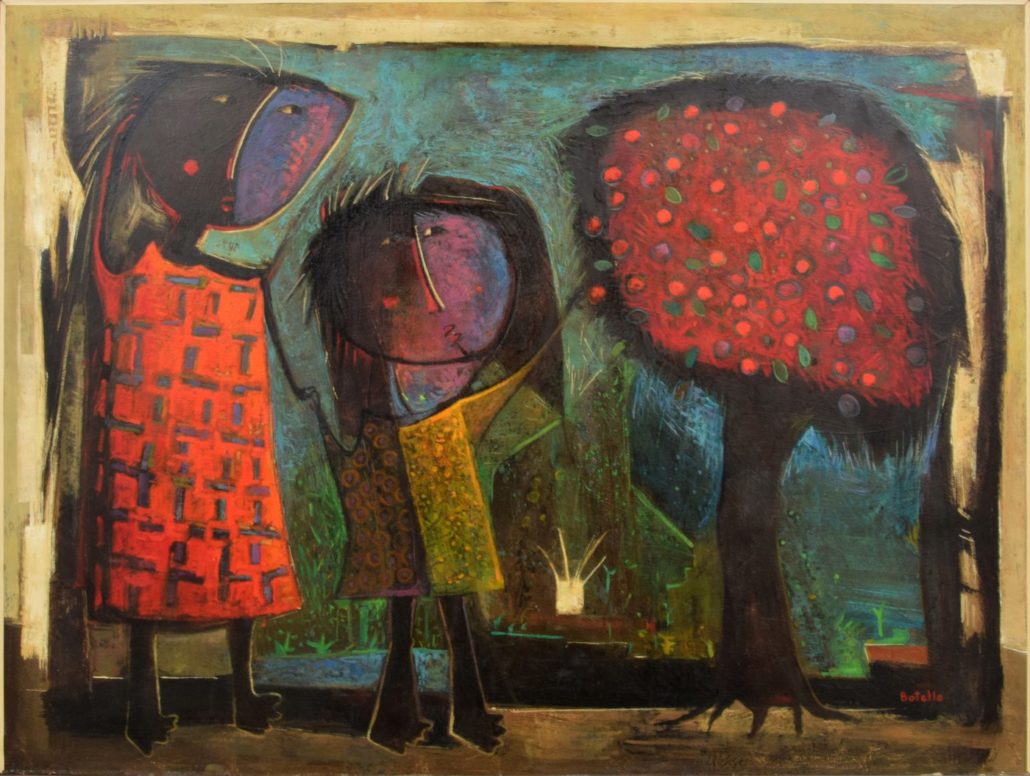 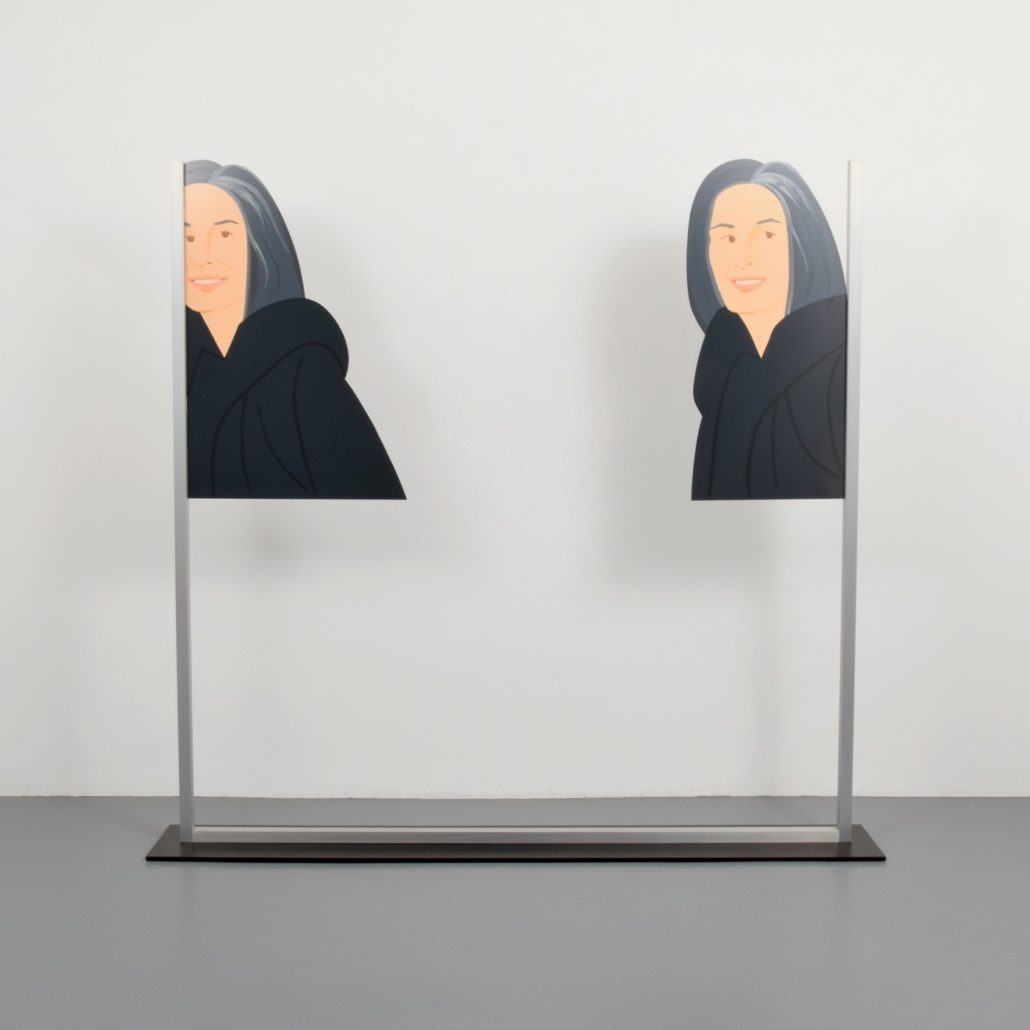 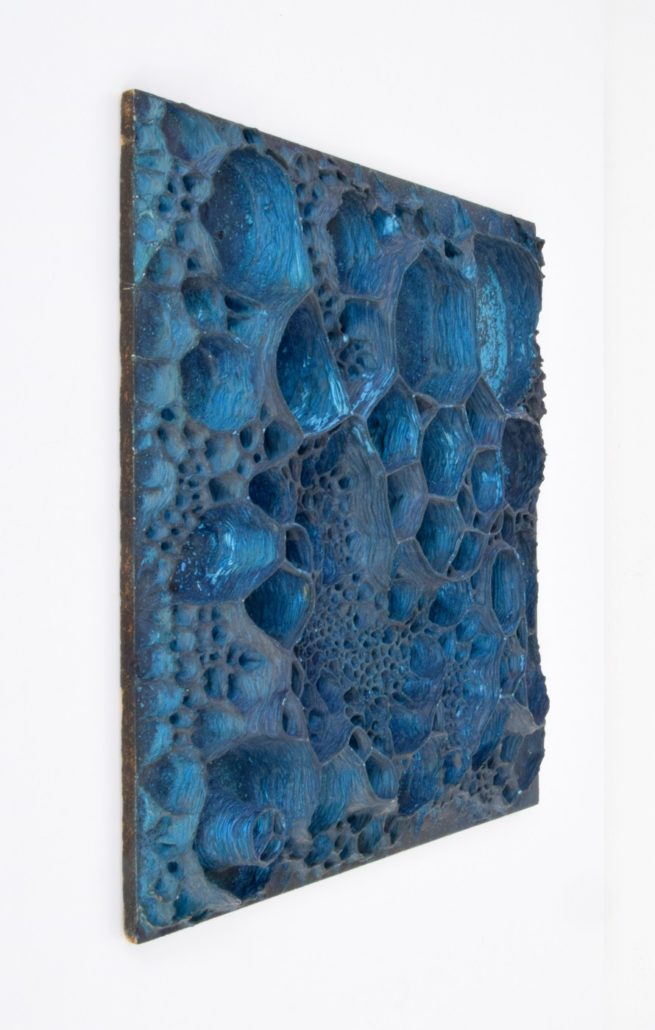 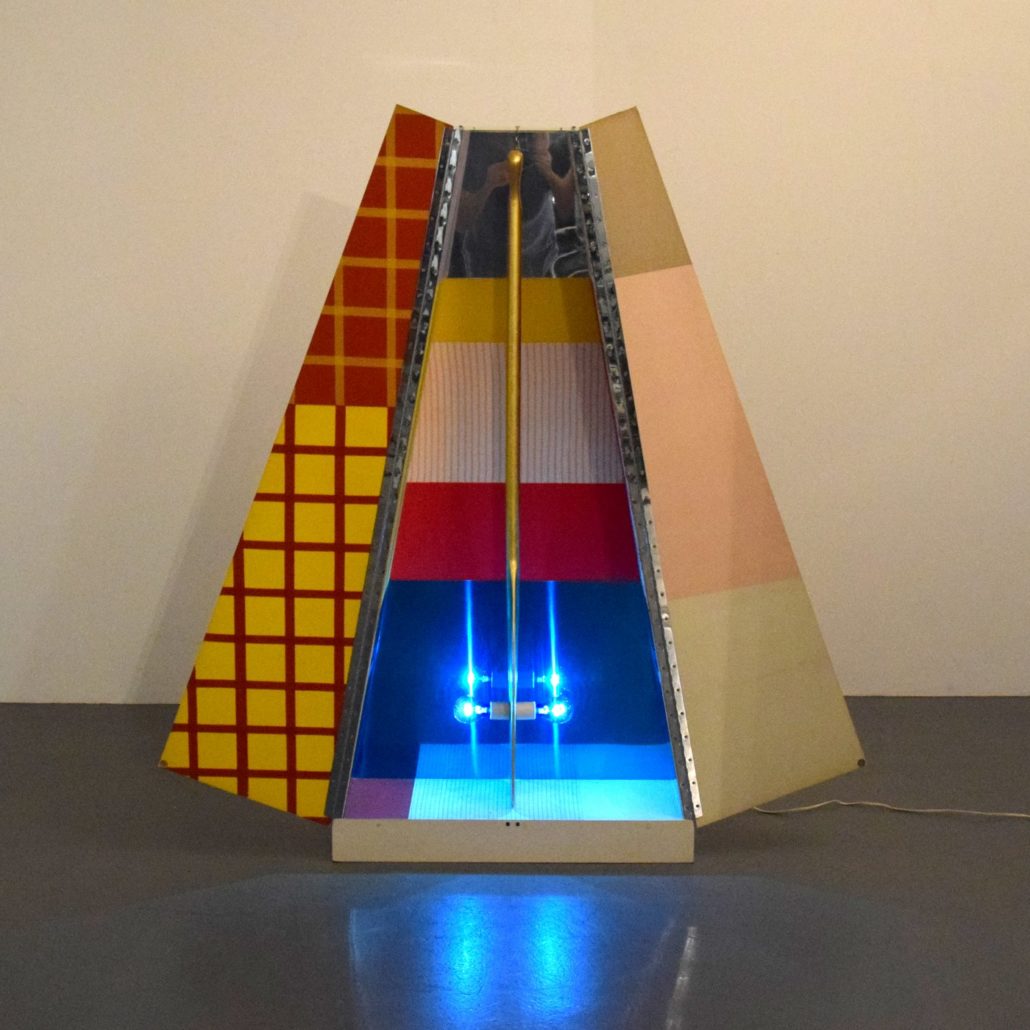 There was a 100% sell-through rate on the choice selection of Picasso pottery entered in the sale. “In fact, we’ve never had an unsold Picasso ceramic since first offering it in our auctions. Everyone wants to own a Picasso, and collectors can’t seem to get enough of it,” Baca observed. The May 6 Picasso grouping was led by a handsome, hand-painted Chouette (Owl) vessel (shown below) that flew to the top of its estimate range at $24,130. Also noteworthy in the decorative art section were a set of four small Philip & Kelvin Laverne plaques that realized $8,255 against a $2,000-$3,000 estimate; and a set of eight Piero Fornasetti Conchiglie plates with attractive shell motifs, $4,765. 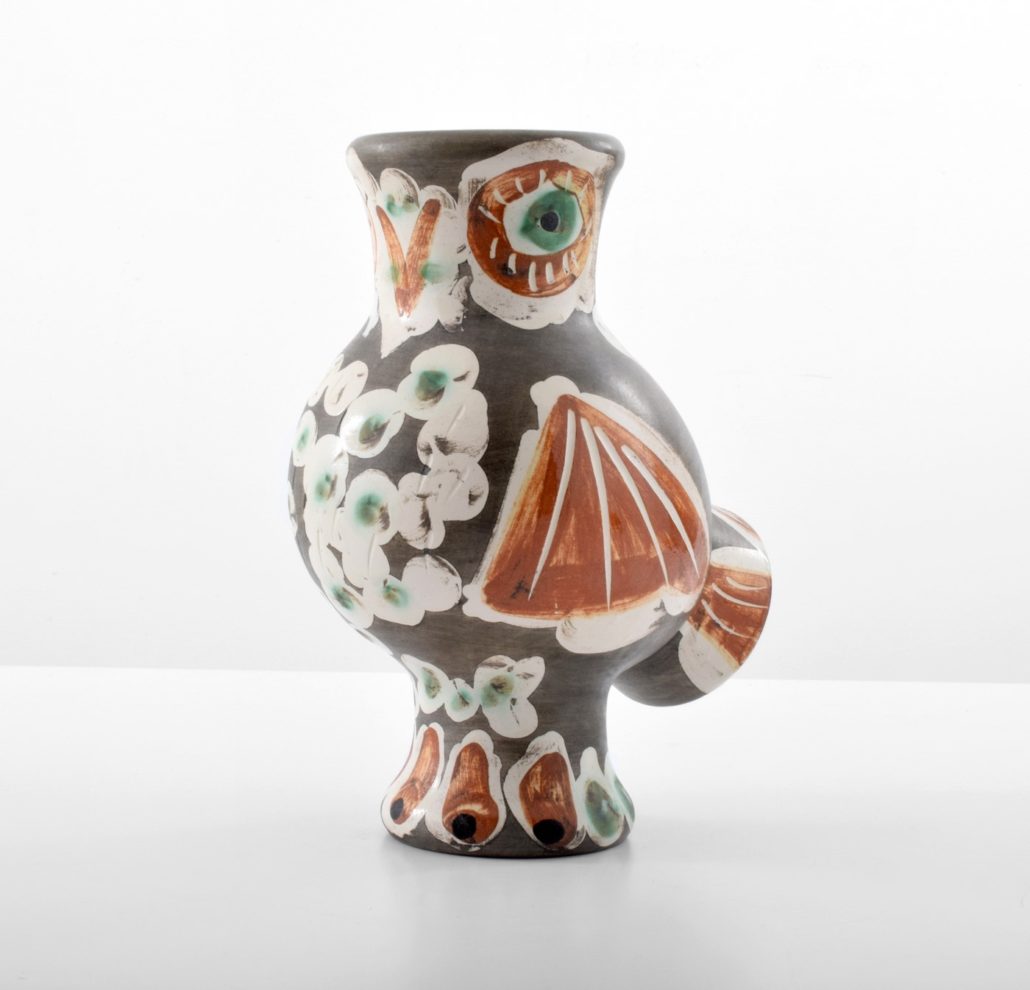 A super-stylish Fontana Arte (Italy) coffee table (shown below) with a concave, sapphire-blue mirrored crystal and glass top is gracing a new home after selling for $35,560 against and estimate of $15,000-$25,000; while another conversation-starter, an iconic 67¾ inch-long Paul Evans Stalagmite design, rose to $10,160 against expectations of $5,000-$8,000. 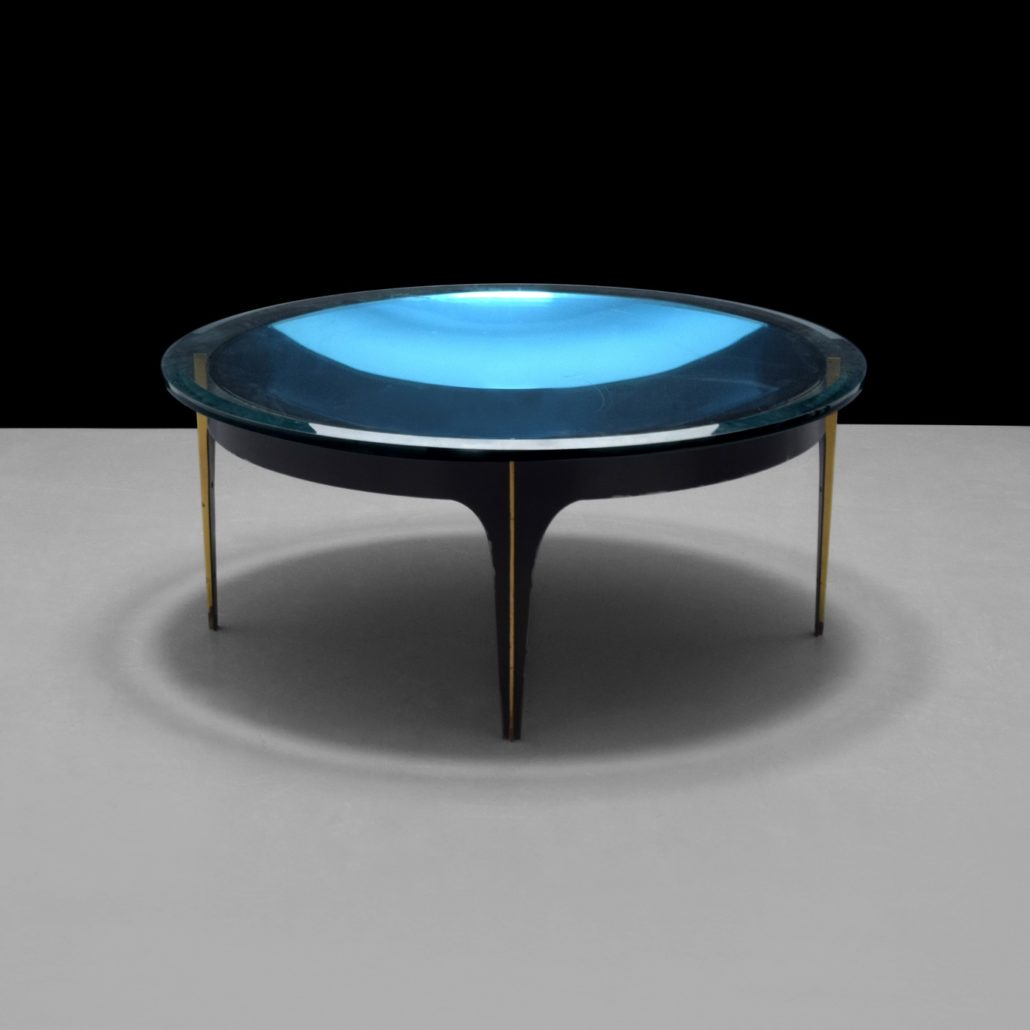 Exquisite fine jewelry, including a number of pieces from Palm Beach estates, included a chunky 14K white gold ring with a 4.40-carat brilliant-cut central diamond. Assessed as being a color D with S12 clarity, it came with an appraisal certificate from the Universal Gemological Services. The ring surpassed its estimate to close at $20,320. 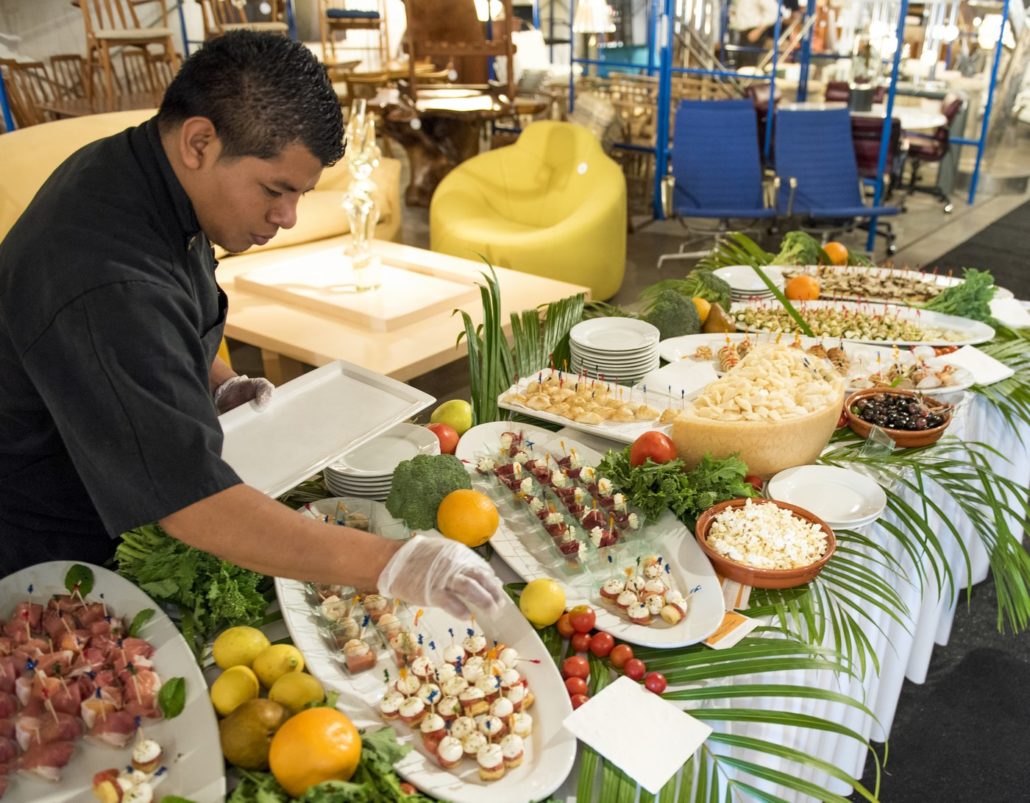 Delicious finger food and snacks were set out on long tables decorated with Florida palm fronds.

“We were extremely happy with the results of our May 6th auction. Not only did we set two significant house records, we also were approached by collectors who said they like the way we operate our business and that they want to consign some important artworks to our future sales. That’s music to any auctioneer’s ears,” Baca said.

Guests at Palm Beach Modern’s May 6 auction could dine and bid as auctioneer/PBMA co-owner Rico Baca presided at the podium. Note the nonchalant canine observer in the baby stroller, shown far left.

View the catalog and prices realized on LiveAuctioneers.