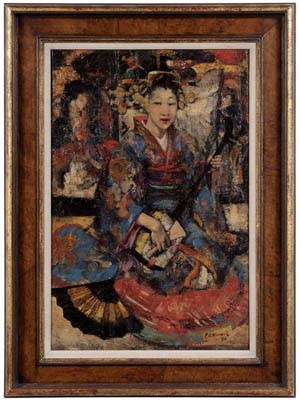 Brunk Auctions devoted an entire page in the color catalog to Edward Atkinson Hornel’s Music in Japan, a 24 ¼” X 15-7/8” oil on canvas painting of a seated shamisen player. The 1894 painting opened at its reserve of $22,000 and sold to a phone bidder for $114,000. Image courtesy of Brunk Auctions.

ASHEVILLE, N.C. – The four lots consigned by the last remaining descendant of a young Civil War officer were, quite possibly, the most personal in Brunk Auctions July 16-17 sale. Richard Kidder Meade Jr. (1835-1862) was a U.S. Army lieutenant during the Confederate bombardment of Fort Sumter, April 12-13, 1861. Two weeks later, Meade, a native Virginian, resigned his commission and joined the Confederate Army. The West Point graduate helped defend Fort Fisher, near Wilmington, N.C., and in early 1862, was promoted to major and assigned to Gen. Robert E. Lee’s staff. The young officer died of typhoid fever on July 31, 1862.

Included in the Meade collection was a handwritten condolence letter from Lee to Meade’s mother expressing his sorrow at “the untimely death of your gallant Son,” a man Lee called a “noble young patriot.” The one-page signed letter dated Aug. 9, 1862, sold for $15,600 (est. $4000-$8000). All selling prices include a 20 percent buyer’s premium.

It was the Confederate Army of Northern Virginia infantry battle flag that many wanted. Possibly given to Maj. Meade’s family or acquired by him during his three battles, the hand-loomed natural dyed wool flag was the iconic symbol of the Confederacy. Phone and on-site bidders carried the flag into battle and raised it to $84,000, far above its $5,000-$10,000 estimate.

The Meade collection also included a fragment of the garrison flag that flew over Fort Sumpter ($3,120) and a Meade family archive of letters, books and paintings ($9,000). The archive sold to an on-site bidder, a collector of North Carolina history.

“It was very difficult to part with these items,” said the consignor after the sale. She is the last of the family line. “I tried last summer to put them up for sale, but couldn’t do it. This summer I thought this is the best way to reach people who would appreciate these objects.” She attended the sale with her husband and met the gentleman who purchased the family archive. “I can tell you she was surprised at the selling prices,” said her husband.

The sale’s top lot predated the Civil War by almost 100 years. It was an 18th-century map of North Carolina by Capt. John Abraham Collet. Collet, an aide-de-camp to William Tryon, royal governor of North Carolina, used survey data gathered by William Churton to complete his map. The exquisitely detailed map, 30 1/2 inches by 44 1/2 inches, served as the prototype for most maps of North Carolina for the 40 years following its creation. Brunk staffers found previous auction records for two of the 12 copies of the Collet map: 1967 at Parke-Bernet Galleries, New York, and 1999 at Sotheby’s, New York. The map opened at its $36,000 reserve and, aided by active phone and on-site bidders, soared to $192,000 (est. $40,000-$60,000).

The second highest painting was a depiction of the journey of Evangeline, the Acadian exile in search of her lover, who was immortalized by poet Henry Wadsworth Longfellow. The signed, dated (1884) and titled oil on canvas by Joseph Rushing Meeker (Missouri, 1827-1889) in its original 19th-century giltwood and composition frame, opened at its $9,000 reserve. It sold for $72,000, tripling its high estimate.

Two scenes of hunting dogs painted by Arthur Fitzwilliam Tait (1819-1905) did well. Tait, America’s first important sporting artist, immigrated to the United States from England in 1850. His landscapes and wildlife paintings were realistic, detailed and colorful. A Close Point, a painting with two spaniels and grouse in a woodland scene, graced the front cover of the Brunk Auction catalog. The signed, dated (1885-6) and titled oil on canvas was illustrated in the 1986 Tait biography by Warder H. Cadbury and Henry F. Marsh. Point opened at $16,000 and sports collectors on the phone, in house and on-line chased it to $66,000 (est. $20,000-$30,000).

The hunters in Ogden Minton Pleissner’s The End of the Day, Duck Shooting looked weary as they unloaded their flat boat after a successful outing. Ogden Pleissner (Vermont-New York, 1905-1983) loved nature, wing shooting and fishing, subjects he painted in oil and watercolor. Beginning in the mid-1920s he traveled to the Western United States in the summer and throughout New England and the South the rest of the year. At $43,200 (est. $20,000-$30,000), The End of the Day, Duck Shooting was the sixth highest lot of the sale.

“The market for fine antique and sporting firearms is strong,” said Auctioneer Bob Brunk. Of the 100-plus antique firearms and edged weapons in the sale, two were clear standouts. A Guilford County longrifle by William Lamb with curly maple stock, silver and brass inlay and leaf and floral engraving was the top rifle. Lamb was one of the early members of a longrifle school operating in Guilford County in the early 19th century. Similar rifles are illustrated in William Ivey’s new book, North Carolina Schools of Longrifles 1765-1865. The 1830-1840 rifle easily doubled its estimate to sell for $18,000.

Of the nine Colt revolvers in the sale, star billing went to a model 1873, .45 caliber “Peacemaker” with all its visible serial numbers matching. The revolver was accompanied by a leather U.S. Army holster and belt with brass buckle. The set hit the top of its estimate and sold for $12,000 (est. $5000-$10,000).

For information on future sales at Brunk Auctions, visit www.brunkauctions.com or call 828-254-6846. 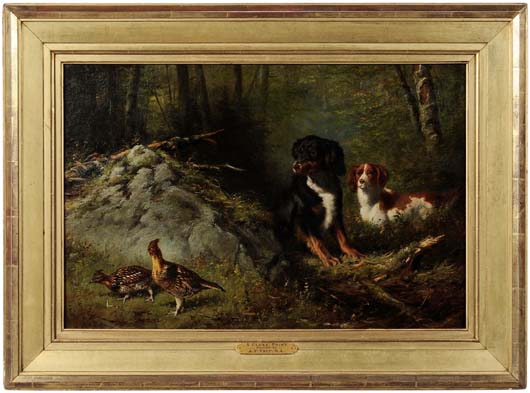 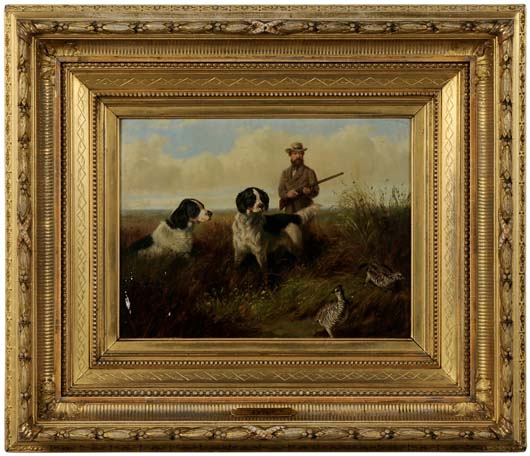 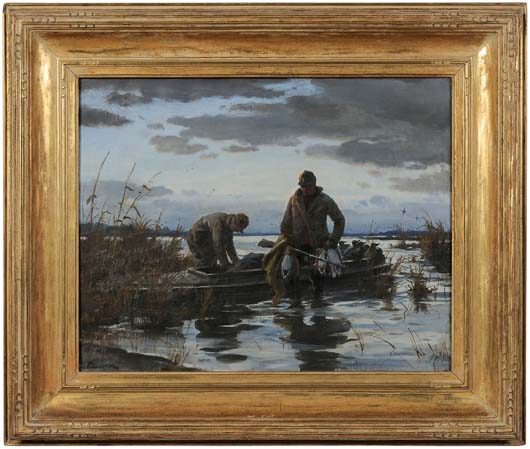 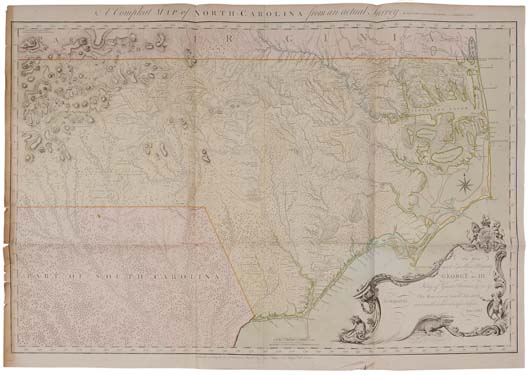 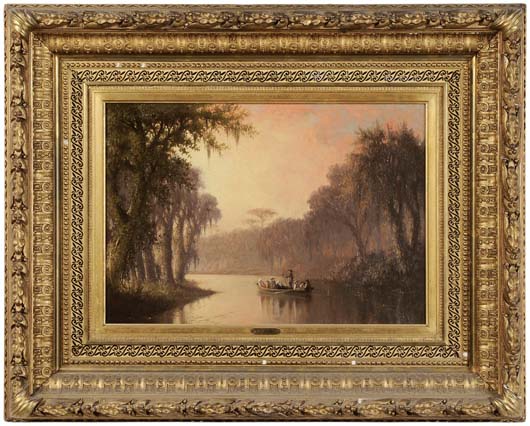 The Guilford County School of riflemaking was active from 1795 to 1902 and became the largest in North Carolina and the South. Their longrifles were known locally as 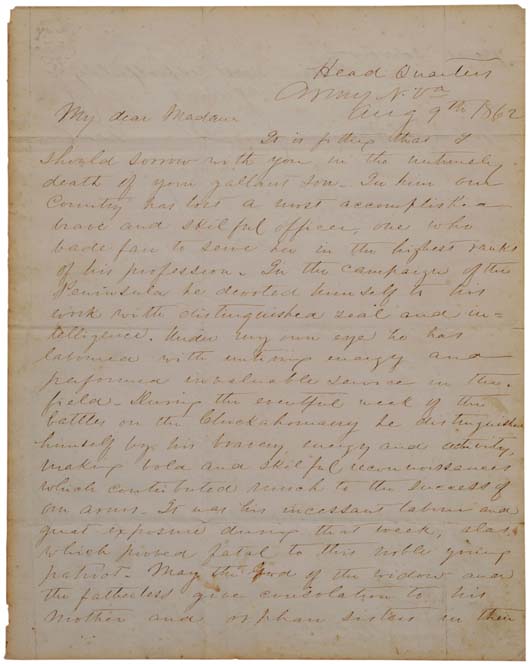 Robert E. Lee sent his condolences to Julia Haskins Meade on the death of her son, Major Richard Kidder Meade in a hand written letter dated August 9, 1862. Included with the letter was the hand-addressed envelope with a five cent stamppostmarked. “We kept the letter wrapped up and never took it out in the light,” said the consignor. The letter sold for $15,600. Image courtesy of Brunk Auctions. 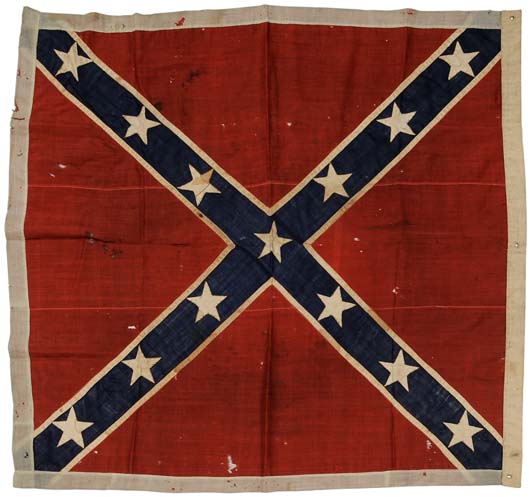 This 46 ½” X 50” Confederate battle flag descended in the family of Major Richard Kidder Meade, a Confederate officer who died of typhoid fever in 1862. The iconic symbol of the Confederacy sold for $84,000. “If I had realized its worth, I might have displayed it,” said the consignor. Image courtesy of Brunk Auctions. 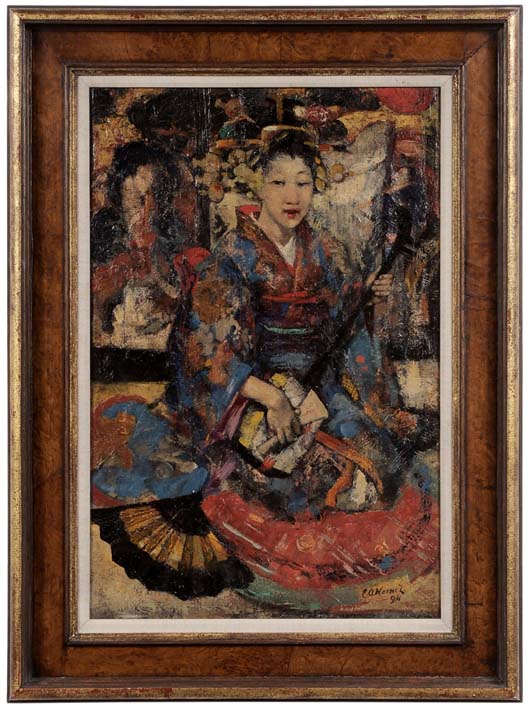 Brunk Auctions devoted an entire page in the color catalog to Edward Atkinson Hornel’s Music in Japan, a 24 ¼” X 15-7/8” oil on canvas painting of a seated shamisen player. The 1894 painting opened at its reserve of $22,000 and sold to a phone bidder for $114,000. Image courtesy of Brunk Auctions.