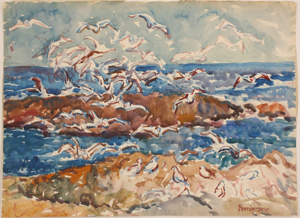 KNOXVILLE, Tenn. – The top three lots at Case Antiques Inc.’s auction Oct. 16 – all pottery – totaled $127,650, but the remaining 700 lots were far from afterthoughts for winning bidders and consignors.

The single-owner collection that boasted the 6 1/2-inch-tall red-glazed jar by San Ildefonso Pueblo potter Anthony Edward Tony Da that sold for $35,650 (prices include a 15-percent buyer’s premium), generated additional noteworthy results. Other highlights from that collection included an 11-inch tall San Ildefonso blackware jar by Blue Corn, with geometric designs and silver lid, $3,450; an acrylic on board painting of a Hopi flute player by Helen Hardin (1943-1984), $2,530; a Santa Clara ceramic egg carved with dancing flute players by Joseph Lonewolfe, $920; and a black bear pottery figure accented with turquoise, wood and suede by Dora Tse-Pe, $863.

The Museum of Early Southern Decorative Arts paid $55,200 to acquire a cobalt slip-decorated stoneware churn labeled in cobalt “Kentucky 1836,” which is the earliest known marked piece of Kentucky pottery. The price represents an auction record paid for Kentucky stoneware.

One lot later, the gavel fell at $36,800 for a slip and copper oxide decorated redware jar by Tennessee potter Christopher Alexander Haun (1821-1861). It was not a record for Tennessee pottery (that record was set by Case in 2008 with the sale of a jar by J.A. Lowe), but it was a record for a jar by Haun, one of the state’s most important artisans. Although MESDA had also expressed interest in the Haun jar, it ultimately sold to a private collector.

“Like Haun, Gutherz is another interesting personality with a Civil War connection,” said company president John Case. “His art studies were disrupted when he joined the Confederate Army, although his talent was put to use working on the design for the ironclad Alabama. He later went on to study with at the Ecole des Beaux Arts in Paris and had a very successful art career.” Works by Gutherz rarely come on the market. This one was bought by a Southern institution.

The auction featured several objects deaccessioned by Historic Belle Meade Plantation in Nashville to benefit the restoration of the collection. Among them was a half-tester bed stamped C. Lee for Charles Lee, a Massachusetts maker of beds for the Southern market, which realized $5,290 despite multiple condition issues, along with a suite of three 19th-century gilt brass argand lamps with etched glass shades, $2,530, and a pair of brass fireplace chenets with eagle and bee design, $2,070. A late 19th-century Tennessee “biscuit table” with a polished stone surface for rolling out dough and a hinged cover for letting it rise sold for $1,610.

A Renaissance Revival dining room table and 14 matching chairs, purchased in the late 19th-century by “merchant prince” C.J. McClung for his Knoxville mansion, served up $7,820, while a Tennessee wardrobe pictured in the book The Art and Mystery of Tennessee Furniture closed at $2,990 and a primitive Tennessee step-back cupboard with glazed two-door top and folky incised star stamped decoration closed at $2,300. A refinished tilt-top cherry candlestand, its top inlaid with a central compass star and edged with leaf and vine inlay, probably Tennessee or Kentucky, topped out at $1,840.

There was steady demand for sterling silver flatware and hollowware, as well as estate jewelry, including a men’s Rolex oyster submariner watch, $4,600, a circa 1930 gold and enamel Cartier pendant watch, $1,265, and its gold chain with engraved links, $1,610. Case said prices of silver and gold on the commodities market were probably a factor. More surprising, however, was an assorted lot of eight late 19th- and early 20th-century copper kettles and molds, which sold for $1,265 against a $250-$350 estimate.

A rare brown and white jacquard woven coverlet from the Maryville (Tenn.) Woolen Mills topped the textiles offerings at $1,840. A Victorian crazy quilt with fan motif earned $575, and a patchwork quilt in a bar pattern that descended in an African American family brought $432. 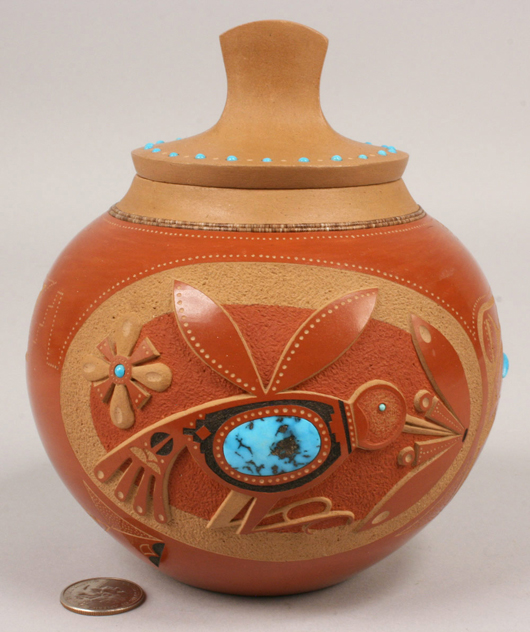 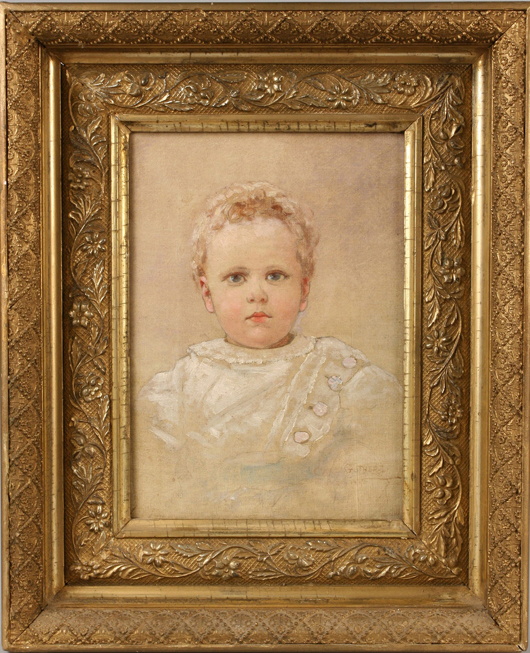 A quintessentially Southern form, this biscuit table served up $1,610. It has a polished stone surface for rolling out dough and a hinged cover for letting it rise. Image courtesy of Case Antiques Inc.

Art expert from Cuba to lecture in Santa Fe