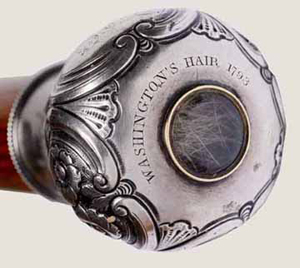 JOHNSON CITY, Tenn. – Kimball M. Sterling’s Saturday, Sept. 26 specialty auction provided conclusive evidence that the international cane market has snapped back and is in fine form. The company’s annual fall cane auction featured 170 fine-quality lots, with consignments including a New York nautical collection, a lifetime collection from the American Midwest, canes from the estate of San Francisco artist Melvin L. Cummings, and many other excellent examples from private collections from around the world

An extraordinary 1856 silver cane, probably by Lowell, purported to include a snippet of memorabilia straight from our first President’s head. The top of the cane was engraved with the following words: “Washington’s Hair 1793,” A concave inserted glass encased hair remnants believed to be those of the beloved Chief Executive. Engraved on the side of the handle next to a bronze depiction of the Liberty Bell wass written “Piece of the Independence Bell and Wood from the State House.” A tantalizing historical relic, the George Washington’s hair cane attracted 11 phone bidders and a swatch of Internet bidders participating from points as distant as Munich, Germany. Complete with cherry-wood case, it sold for $10,950 against an estimate of $3,000-$5,000.

The auction’s top folk art cane was a French example consigned from the Estate of Melvin Cummings. Profusely carved with more than 100 depictions of human beings, animals, seashells, portraits, cats, birds and symbols, it hammered $4,600.

A late-19th-century French defensive “spike” cane featured articulated spikes that spring out when the cane’s metal collar is slipped down. “Of all of the known defensive canes, this particular example is probably the most dangerous,” auctioneer Kimball Sterling noted. It sold above its estimate for $4,100.

Internet bidders participating through LiveAuctioneers.com prevailed on 25% of the auction lots and were potent underbidders on “most all lots in the auction,” Sterling said.

“The top lots of the auction were all featured lots on LiveAuctioneers’ digital newspaper, Auction Central News,” Sterling continued. “Auction Central News also brought many fresh crossover bidders to the cane auction, from Russia to Dubai.”

Kimball M. Sterling’s next cane auction is scheduled for spring 2010. Consignments are now being accepted for the sale. For additional information, call Kimball M. Sterling at 423-928-1471, email kimballsterling@earthlink.net or visit the company online at www.auctionauction.com. 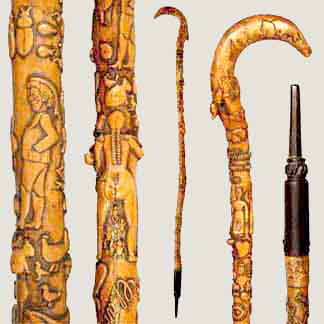 Early 19th-century Melvin E. Cummings folk-art cane from the estate of the artist, $4,600. 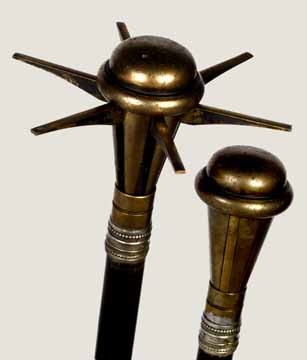 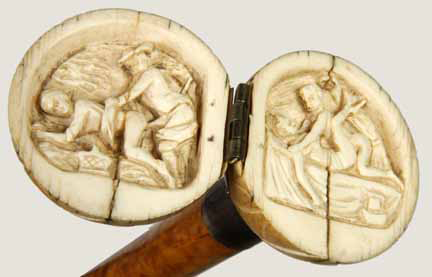