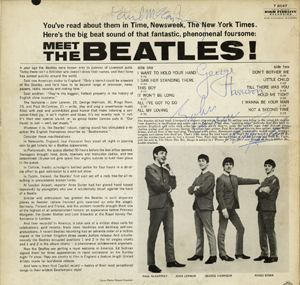 ‘Meet The Beatles’ album, signed by John, Paul, George and Ringo and given to the physician who treated George the day before their 1964 ‘Ed Sullivan Show’ appearance, sold for $63,250. Image courtesy of Case Antiques.

KNOXVILLE, Tenn. – A record number of floor and phone bidders, an unprecedented number of online bidders through LiveAuctioneers.com, and a signed Beatles record that sold for $63,250 all combined to make the May 21 Spring Case Antiques auction the company’s most successful sale to date.

“While having a strong single lot like the Beatles album is great, what really encouraged us was increased demand and healthier prices than we’d seen in some time in most categories across the board – Asian, silver, ceramics, even furniture,” said company president John Case. He added that the 721-lot sale, held at Case’s gallery in Knoxville was the company’s highest grossing auction ever.

The Meet the Beatles album, containing the group’s first U.S. chart topping hit I Want to Hold Your Hand, was signed by all four band members. It came from a descendent of Dr. Jules Gordon, the New York physician who treated George Harrison for strep throat on Feb. 8, 1964, the day before the band’s American television debut on the Ed Sullivan Show. With impeccable provenance and excellent condition in its favor, the album attracted heavy phone and internet bidding and quickly shot past its $15,000 top estimate to $63,250 (all prices include the 15 percent buyer’s premium).

Most of the buyers at the auction, however, were focused on fine and decorative art, particularly Southern regional material. That category included a miniature Tennessee cherry Classical press with two glazed doors won by a regional collector for $17,825, nearly 10 times its estimate, while a full-size and finely grained cherry Jackson press brought $2,990, the same price realized by a Southern walnut Chippendale high chest. A Knox County, Tenn., walnut candlestand brought $1,380. A circa 1850 portrait of Confederate general Daniel Smith Donelson, for whom Fort Donelson was named, sold to Rock Castle, a Middle Tennessee historic house museum, for $7,590 (est. $3,500-$4,500), and a Davidson County, Tenn., sampler with alphabets, verse and floral border, signed and dated 1833, earned $6,440. A hand-colored map of Kentucky and Tennessee dating from 1796 – one year prior to Tennessee statehood – sold for $1,840, while an 1877 folding postal map of Tennessee, measuring a generous 3 1/2 ft by nearly 5 1/2 feet, delivered $2,185.

Asian material continued its hot streak; there were more Chinese bidders registered online than from any other country except the U.S. and Canada. An ivory collection brought to the U.S. from Asia in the late 19th and early 20th century by two wealthy Nashville candy tycoons was highlighted by a 6-inch high carved figure of Quan Yin, $2,645, while a string of Ojime beads in ivory, horn, Shibayama and other materials, from the same estate, sold on the phone for $5,520 (est. $1,400-$2,200). Individual ivory netsukes brought from $200-$550 apiece. A lot of three small Chinese Wucai eggshell porcelain wine cups with Yongzheng marks buzzed to $5,980 (est. $700-$900), a pair of Famille Rose dishes with Baragon turned marks competed to $4,600 (est. $400-$600), and a 12-inch Chinese oxblood flambé porcelain vase, Hu form, with Xianfeng mark, brought $2,415 (est. $500-$700).

Silver was another consistently strong category in the sale, with most lots selling within or above estimates. The leading lot was a Mexican sterling coffee service with eight pieces and tray, which sold for $11,040. A lot of three coin silver teaspoons bearing the mark of Tennessee silversmith Samuel Bell served up $748 (est. $400-$450).

The auction included two particular single-owner collections: fire related material and antique bicycles. The first was highlighted by a wood and cast-iron miniature fire house by Ives, which reached $2,070 despite some condition issues, a silverplated presentation fire trumpet awarded in 1866 by members of the Hoboken Engine Co. No 1, $2,265; and a lot of four 19th-century fire helmets, $1,725.

Among the other noteworthy objects in the sale was a pair of Haviland porcelain game plates in the “Flora and Fauna” pattern designed for the Rutherford B. Hayes White House by Theodore Davis, and bearing the presidential eagle seal on the back. The pair realized $3,105 (est. $800-$1,200). Surprising interest propelled a 13-inch Nippon portrait vase with aqua ground, moriage decoration, and inset painting of Princess Louise to $4,600 against a $1,200-$1,400 estimate, and a framed 36-star U.S. Centennial exposition flag flew at $4,140. 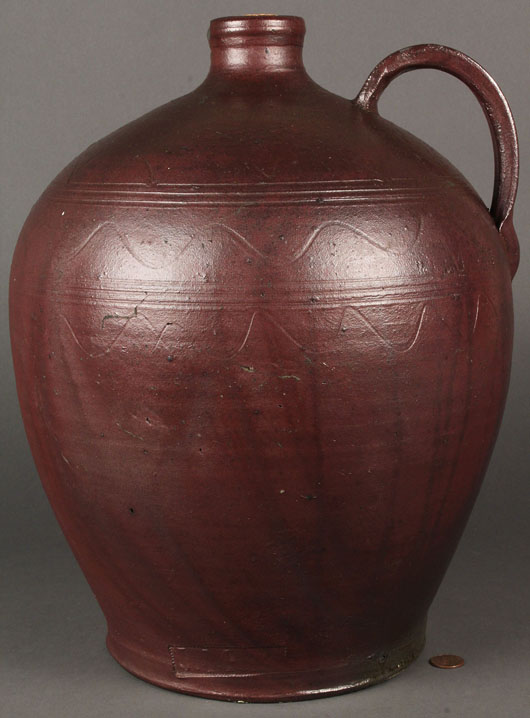 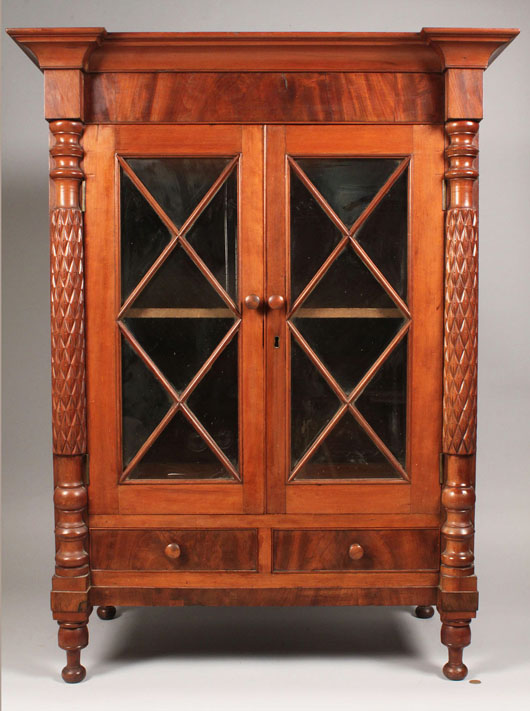 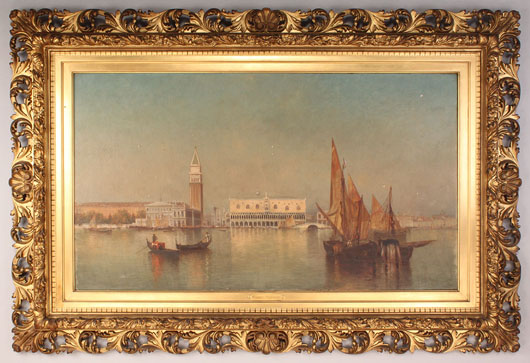 A panoramic oil on canvas of St. Mark’s Square in Venice viewed from the Grand Canal competed to $13,225. Image courtesy of Case Antiques. 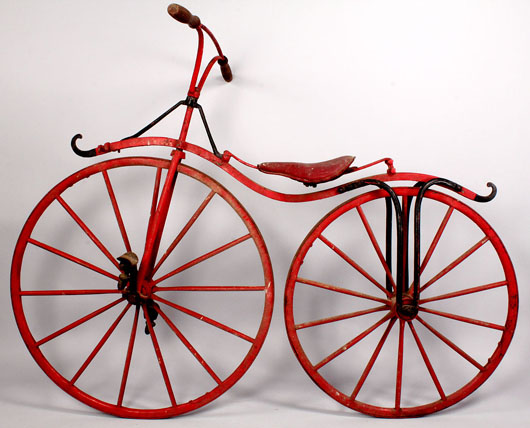