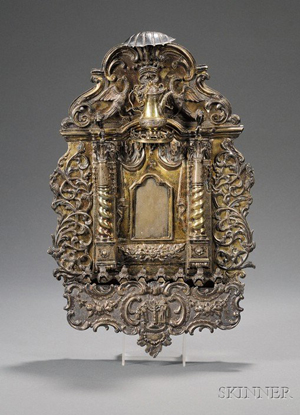 Synagogue Hanukkah lamps of Eastern Europe are characterized by bold scrollwork and vines, birds and animals, such as herons, squirrels and dolphins. Image courtesy LiveAuctioneers.com Archive and Skinner Inc.

BOSTON – Led by the sale of an important Hanukkah lamp, Skinner’s auction of antique and artisan Judaica on May 21 grossed more than $1.2 million, triple the presale estimate. LiveAuctioneers.com provided live Internet bidding.

The top object in the 200-lot sale was a rare silver and silver gilt synagogue ark-form Hanukkah lamp, originating in Brody (Galicia), and dated 1787. Auctioned for $314,000 (including buyer’s premium), against a presale estimate of $60,000-$80,000, this lot and 50 others in the auction were formerly in the Salomon collection, and not seen in the marketplace since sold at auction at the Parke-Bernet Galleries, New York, in 1949. From the late 1920s through the 1940s the lamp was illustrated in numerous books, publications and articles.

“The success of this lot demonstrates that exceptional and rare material presented at auction finds a very strong bidding audience in any economy, said Kerry Shrives, Skinner’s director of Fine Judaica, “but this is especially true in more turbulent times as people turn to tangibles as a hedge against uncertain financial markets.” Shrives added, “Collectors are always in search of material that is fresh-to-the-marketplace and has great provenance. The robust prices overall at this auction reflect that sentiment.”

Broadly described as the material culture of the Jewish people, Judaica objects have cultural or religious significance, whether made for the marketplace or for the synagogue. 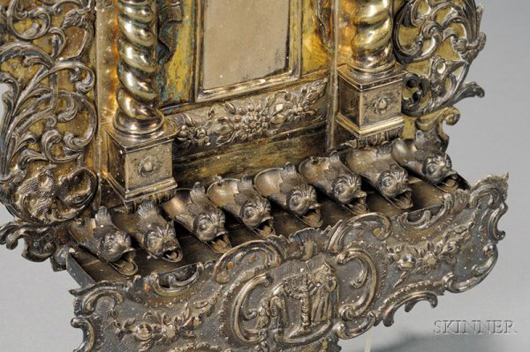 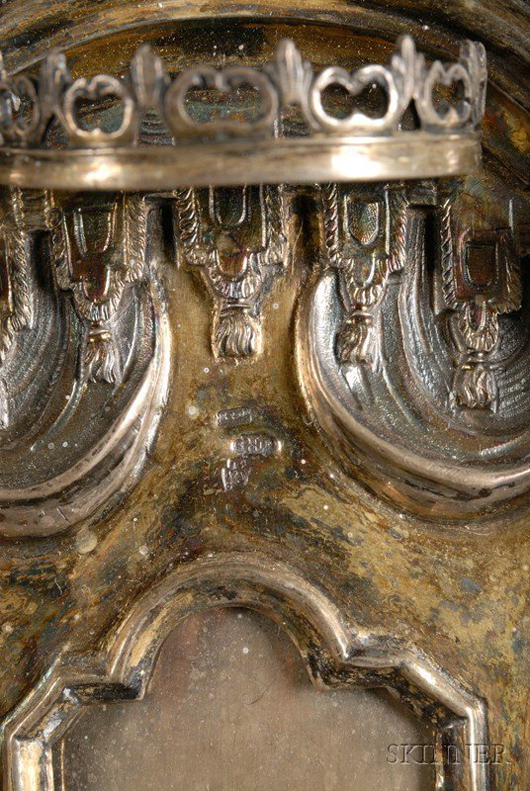 The celebrated Hanukkah lamp is dated 1787 and is also marked with a circa 1809-1810 duty stamp. Image courtesy LiveAuctioneers.com Archive and Skinner Inc.