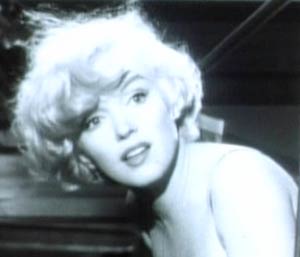 Marylin Monroe, from Some Like It Hot trailer. Image courtesy Wikipedia.

MELBOURNE, Australia (AP) – Rare film footage of Marilyn Monroe on the set of her 1959 hit Some Like It Hot sold at auction for US$14,624.

The two-and-a-half minute 8 mm film, which features Monroe goofing around with co-stars Tony Curtis and Jack Lemmon, was shot by a U.S. naval officer who was invited to the set after Monroe visited his base in San Diego.

The sailor’s daughter, who moved to Australia’s Victoria state, discovered the film by chance among her late father’s possessions.

The footage, which was snapped up Thursday by an unnamed collector from Sydney, fell short of the presale estimate of $16,721-$20,896, but auctioneer Charles Leski of Leski Auctions acknowledged it “was something of a guess.”

“The sale price was in the ballpark but we didn’t have too much to compare it with,” Leski said. “Our only comparison – the only other bit of amateur footage of Monroe that changed hands at an auction – was a 47-minute film shot by an extra on another of her films, The Misfits, which was sold in Las Vegas in June for US$60,000.”

The film shows Monroe surrounded by sailors at the base and later cuts to scenes from the movie set.

Monroe, who died in 1962 from a drug overdose, won a Golden Globe award in 1960 for her performance in the screwball comedy

No sale at auction of purported ‘Marilyn Monroe’ sex film