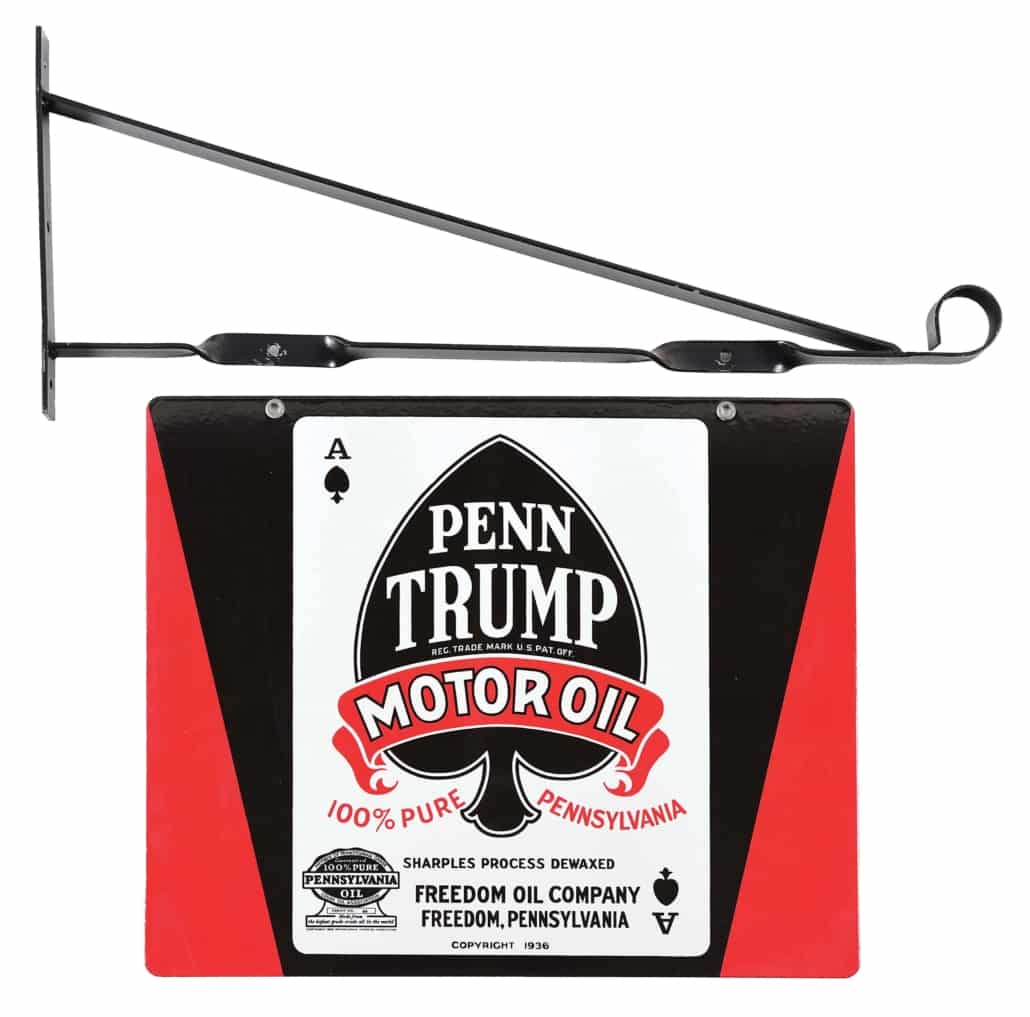 The top lot of the two-day auction was a rare and especially fine double-sided porcelain service station sign advertising Penn Trump Motor Oil. New/old stock with original metal hanging bracket. Sold for $52,275 against an estimate of $10,000-$20,000

DENVER, Pa. – Superior-quality gas and oil advertising signs, early gas pumps and globes; and other antique motoring memorabilia performed like Indy 500 champs on October 14-15 at Morphy Auctions’ gallery. The 1,162-lot Automobilia & Petroliana sale – a visual testament to America’s century-long obsession with motorcars – tallied $3 million, with many estimate-defying twists and turns along the way. Absentee and Internet live bidding was facilitated by LiveAuctioneers.

Leading the 800+ signs that crossed the auction block during the amply-attended event was a fantastic double-sided porcelain service station sign advertising Penn Trump Motor Oil of Pennsylvania (see top of page). Described in the catalog as “new/old stock,” its impeccable presentation, with a crisp and eye-catching “ace of spades” playing card graphic, was 100% complete with the inclusion of the sign’s original metal hanging bracket. Against an estimate of $10,000-$20,000, it sold for $52,275, making it the top lot of the lively two-day sale.

There was strong interest in neon signs, especially those advertising the classic American motoring brand Ford. Some lucky collector’s wall is now shining brightly with the addition of a spectacular Ford Lubrication die-cut porcelain two-color neon sign. Measuring 108 inches wide and in unbelievable 9.25+ all-original condition, it boasts exceptional color and high gloss throughout. The sign is factory-marked to identify its manufacturer as “Mulholland Sign Co., Kalamazoo, Michigan.” Against a $6,000-$12,000 pre-sale estimate, it raced to $44,280.

A three-dimensional die-cut porcelain neon sign emblazoned with the “Ford” name in script lettering, 112 inches wide, had been removed from a Ford dealership in Dallas in the early 1970s. In excellent 8.5+ condition, it went off to a new owner for $27,675 against an estimate of $8,000-$14,000.

Prior to auction day, one of the most asked-about items was an outstanding Oilzum Motor Oil & Lubricants porcelain curb sign with an orange-and-black graphic showing the company’s capped and goggled mascot, “Oswald the Driver.” A double-sided circular sign on a sturdy upright iron base, its condition was graded 8.75 on one side and 8.0 on the other. The above-estimate selling price at Morphy’s was $33,825. 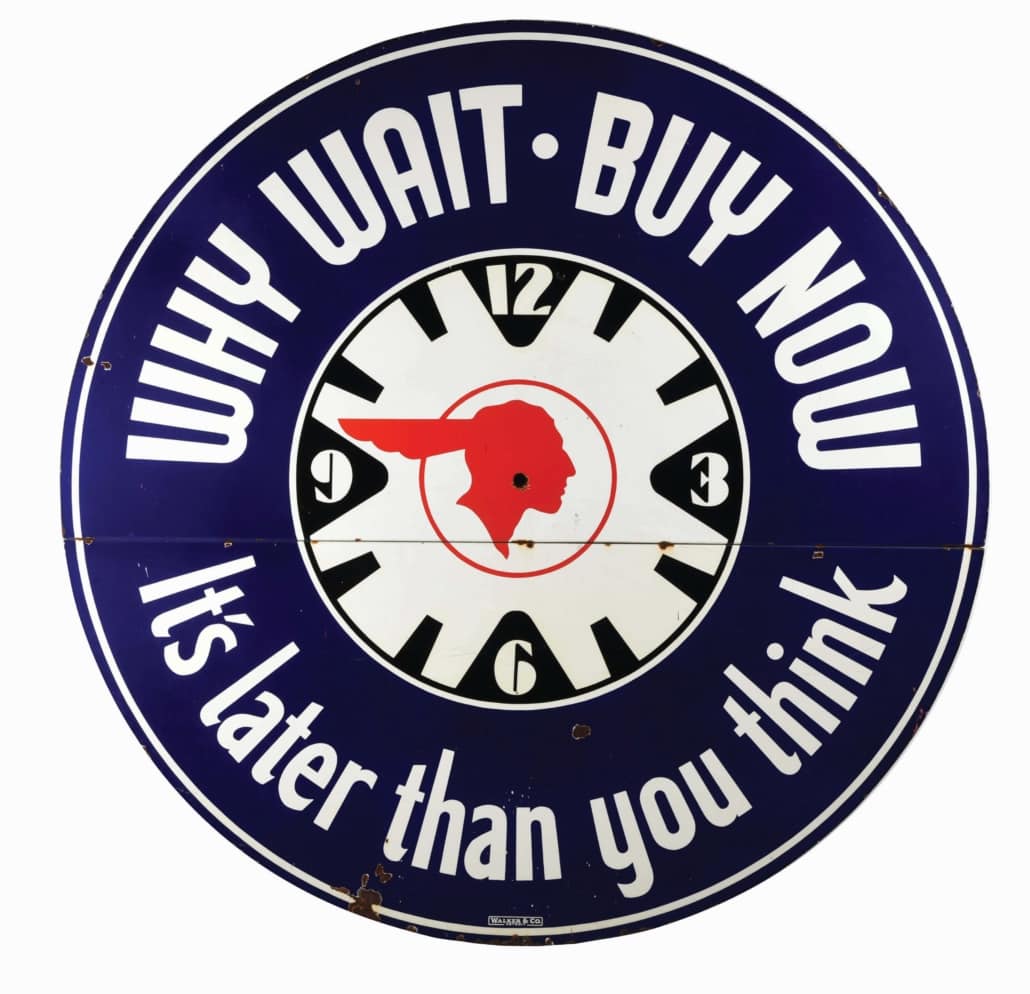 Another highly identifiable motoring emblem, the image of Ottawa tribal chief Pontiac, was seen in logos and advertising for the Pontiac Motor Company in one form or another from 1926 until its retirement in 1956. A solid-red silhouette of Pontiac, his hair adorned with a feather, figures prominently in a handsome 72-inch (diameter) clock-face porcelain dealership sign that was offered with a $6,000-$12,000 estimate. Multiple bidders “drove” the price to $24,600. 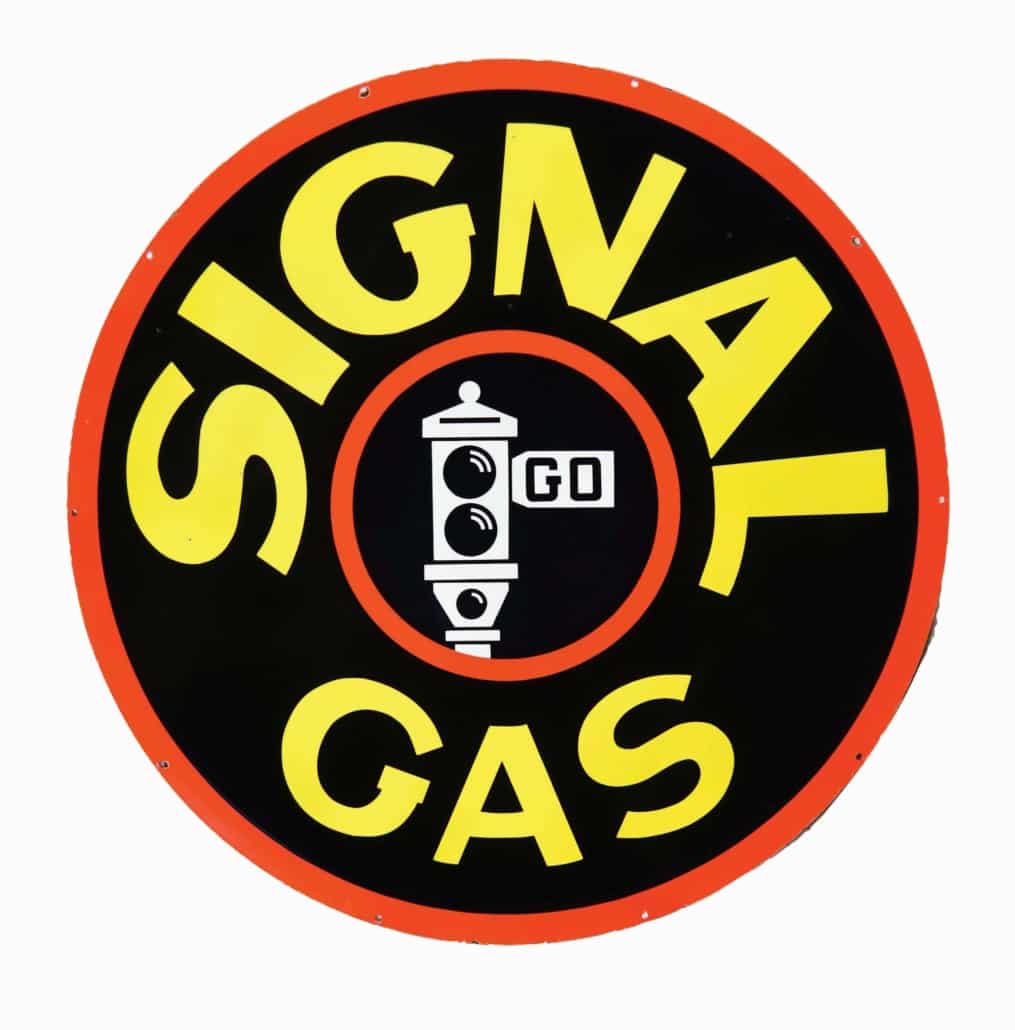 A seldom-encountered Signal Gasoline double-sided porcelain service station sign with the earlier “black stoplight” graphic, 72 inches in diameter, was graded 8.9+ and likely came from new/old stock. With green lights guiding it all the way, it rose through the bidding ranks to close at $23,370 against an estimate of $12,000-$18,000. 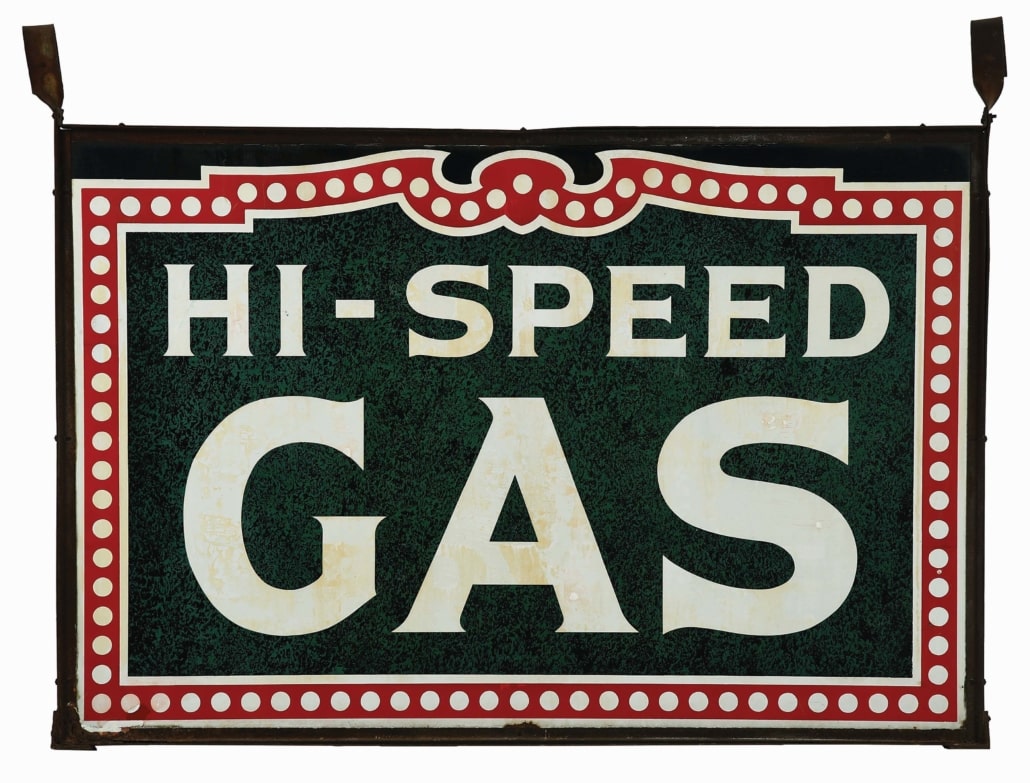 Even signs with a simple motif found favor with savvy collectors who recognized the ideal combination of rarity and pristine condition when they saw it. A case in point was the hard-to-find double-sided porcelain sign advertising “Hi-Speed Gas.” With its brief but compelling message framed within a classic Art Deco-style border, it attracted the true connoisseurs, who chased it to $11,685 against expectations of $1,500-$3,000.

Gas pumps and their colorful glass globes take pride of place in many petroliana collections, but the finest early examples are increasingly difficult to locate. Standouts in the October 14-15 sale included a rare Raymond Garage four-in-one 5-gallon visible gas pump with air, water and oil attachments, which sold for $47,970 against $15,000-$25,000 estimate; and a rippled-glass globe advertising Buffalo Gasoline, which secured a winning bid of $15,990 against a high estimate of $10,000. 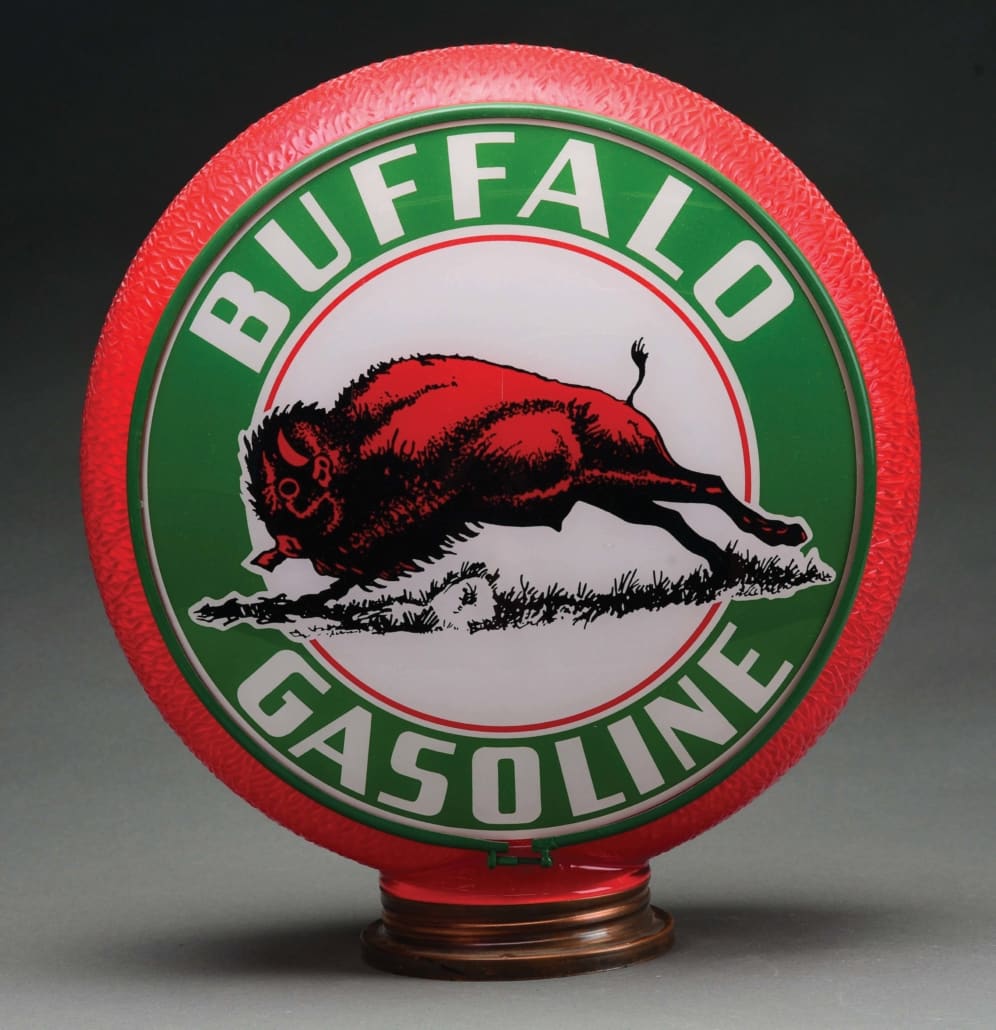 There was hot competition for rare gas-pump globes like this one advertising Buffalo Gasoline. Attractive rippled-finish glass. Sold for $15,990 against an estimate of $6,000-$10,000

An unusual Lipman Air Service Station air meter with globe sold for $49,200 against an estimate of $15,000-$30,000; while a pillar-form Gasco Air-Water Station with an illuminating air meter and water dispenser more than tripled its high estimate to reach $17,220.

To discuss a consignment of automobilia, petroliana or any other type of antique, vintage collectible or artwork to a future Morphy’s sale, call toll-free 877-968-8880 or email info@morphyauctions.com. Visit Morphy’s online at www.morphyauctions.com. 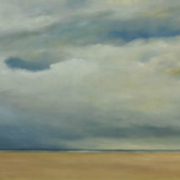 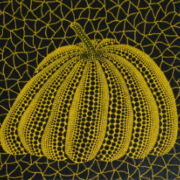 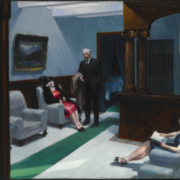 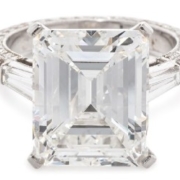 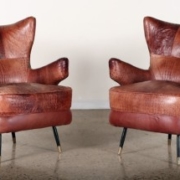 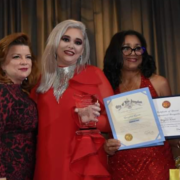 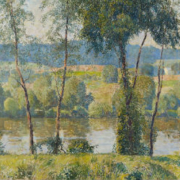