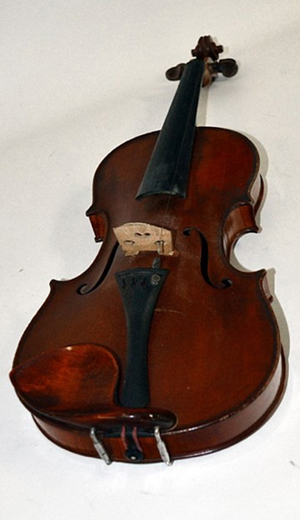 Bill Roland, auctioneer, noted that the gallery was packed. “It was gratifying,” he said, “to see all the chairs occupied and bidders lined up by the wall. As we come up to our first anniversary, it’s clear that our name and reputation are bringing in more and more buyers.”

Case in point was the day’s lead item, a 1929 violin by the Italian maker Camillo Mandelli di Calco. With a bidder in the room and another on the phone, the professional instrument from a Florida estate, quickly made $15,600.

The gallery’s collective exhale was followed by fast and furious bidding on a run of mid-century luxury brand furniture. The lead item in this category was a 1957 Dunbar chest of drawers designed by Edward Wormley and Otto Natzler. It commanded $6,600. It was followed by a Dunbar brass and cork top game table on a column base that made $4,800.

If bargains are the dream of auction hunters, then the day held at least two. The first was Paul McCobb’s mahogany sideboard with six paneled drawers and fitted interior that fetched $1,200. The best deal, however, was Frank Lloyd Wright carved oak bench that found its market value at $1,020.

Nostalgia for the great era of steamships crept in when Jacques Adnet‘s club chair from the cruise ship France commanded $3,600. And the appeal of Art Deco held steady as a pair of German high-back chairs with curved arms, ball decorations and finial, found a buyer for $2,400.

Art, no matter what its form, had its way with the buyers as well. For instance, a Daniel Louradour six-panel Italian festival screen depicting dancers, harlequins, mimes and street performers found a new home at $3,900. A Silas Seandel bronze and enamel abstract sculpture made $2,040, which made it only slightly less desirable to 21st century collectors than a Pablo Picasso tapestry that made $2,200.

The New York School of abstract expressionism was represented by a collection of Seymour Franks oils-on-canvas. All with the provenance of the Knolder gallery, they brought $1,300 and $2,400.

Meanwhile, a Haitian surrealistic still life of a vase with candles haunted by the specter of a branch by J.E. Gourgue made $1,680.

Although it sometimes seem as if collectors’ history goes back no farther than 50 years, quality items from the 19th century maintained held strong. A Theodore Deck ceramic vase, for example, caused a ripple of excitement when it brought $2,280.

Coinciding with the Metropolitan Museum of Art’s new exhibition of African sculpture was a group of African carved wood items. The most outstanding of these was a headrest with the provenance of Galerie Flak, Paris, that commanded $1,140. At the low end, two Ivory Coast Senufo stools made $220. Either way, the Met’s new exhibition is bound to create renewed interest in African icons.

Finally, a collection of electric guitars led with a Fender Precision base that went for $1,560.

Highlights of the upcoming Roland First Anniversary Auction on Oct. 15 will soon be online at LiveAuctioneers.com. Items by Asprey, Marcel Breuer, Knoll, Thonet, Serge Poliakoff and Lichenstein will be featured. 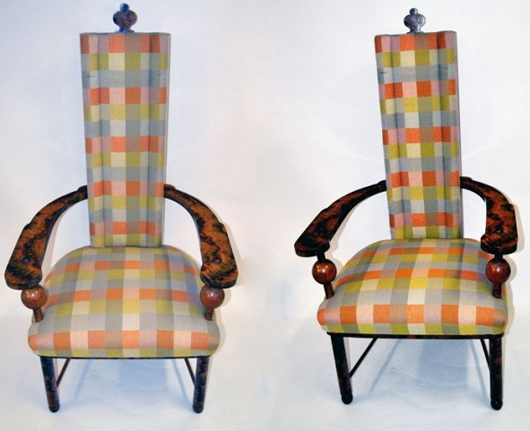