HARRISBURG, Pa. – A newly discovered painting by artist Paul Feiler (German/English, b. 1918) sold for $35,650 in Cordier Auctions’ Antique & Fine Art Auction on Nov. 10-11. The winning bidder purchased the painting through LiveAuctioneers.com, which provided Internet live bidding for the 881-lot auction.

The Feiler painting was discovered by a young couple at a local retirement home rummage sale and brought in to Cordier’s open appraisal day where they were pleasantly surprised to learn its potential value. Titled Cornish Landscape, the painting was subsequently consigned to Cordier’s Fall catalog auction, where it generated international interest and bidding opened online at $15,000. Bidding was strong between the Internet and a bidder in the room with the LiveAuctioneer.com bidder coming away the winner.

The remaining prices in this report are hammer prices and do not include a buyer’s premium.

The sale featured items from over 150 consignors including estates and collectors. Over 400 people were in attendance during the two days in addition to phone and absentee bidders while more than 1,700 bidders were preregistered to bid via the Internet. Prices quoted are hammer prices.

Saturday’s sale included books and paper, collectibles, toys silver, jewelry, porcelain and glass. The highlight of the books and paper category was a collection of Pennsylvania governors’ signatures. The single-owner collection comprised 60 documents signed by governors provincial to modern, all professionally framed in identical frames, and included such notables as William Markham and Thomas and John Penn. The collection sold to a local collector just above high estimate at $5,500.

Collectibles and toys offered a wide range of items that did well overall. A Regina disc music box that included 59 discs and its original stand sold to the Internet just above low estimate at $2,750, while an antique full-size floor model Jumbo Dice Wheel by H.C. Evans of Chicago sold under low estimate at $1,300. A highlight among toys was a Hubley Harley-Davison cast-iron motorcycle. Estimated at $200 to $400, the toy saw strong bidding on the Internet and floor before selling for $1,000.

A 1925 Ford Model T “C” cab pickup truck was one of two vehicles offered in Saturday’s session. The truck had undergone a restoration/modification in 2003 and was estimated at $5,000 to $10,000. It sold to a collector in the room within estimate at $8,500. The second vehicle was an Arrow Development amusement park ride car styled after a Model T-type touring sedan that had been decommissioned from Hersheypark in 1974. It sold within estimate at $3,500.

Over 50 lots of sterling were offered including flatware sets, tea sets, French serving pieces and more and prices were strong. The highlight of this category, and the top lot of Saturday’s session, was a large 24-inch English sterling nef. Hallmarked for Edwin Thomson Bryant of London circa 1891, the piece sailed past its $5,000 to $7,000 estimate to hammer down at $12,000 to a phone bidder from Massachusetts.

Saturday’s session continued with over 100 lots of fine jewelry and watches. Of note was a figural diamond sword pin set with 4.74 total carats of clear, yellow and brown natural diamonds set in 18K gold and platinum which sold for $5,600 (estimate $3,000 to $6,000) as did a 2.03 carat-weight diamond filigree ring (estimate $2,200 to $3,200). Among watches, a man’s 18K Omega Constellation wristwatch realized its high estimate of $4,000, going to an online bidder.

Saturday’s sale concluded with porcelain and glass including dinner sets, stemware and more. Of note was a pair of Sevres covered urns signed “A. Daret” that realized $1,800 (estimate $1,000 to $2,000).

Over 120 lots of fine art produced several strong results in addition to the Feiler painting. A surprise in this category was a sculpture of a hunter marked for the Roman Bronze Works in New York. Estimated at $500 to $700, the piece saw bidding entirely online, hammering down at $6,000.

Consignments for Cordier’s Spring catalog auction are currently being accepted. Questions can be directed to Cordier Auctions & Appraisals at auctions@cordierantiques.com or by calling 717-731-8662. 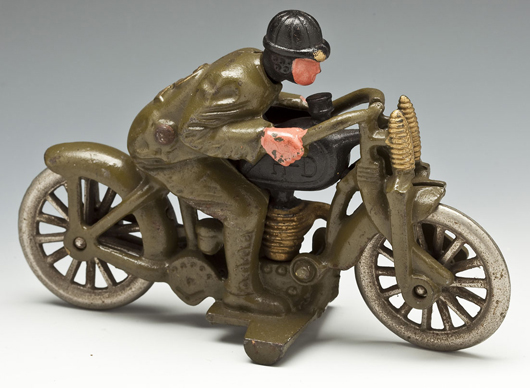 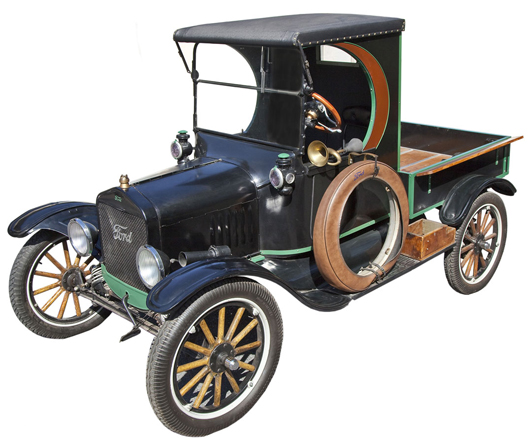 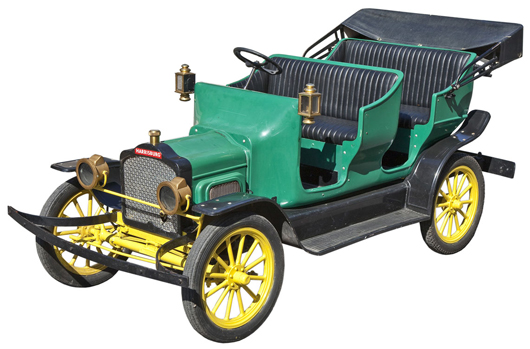 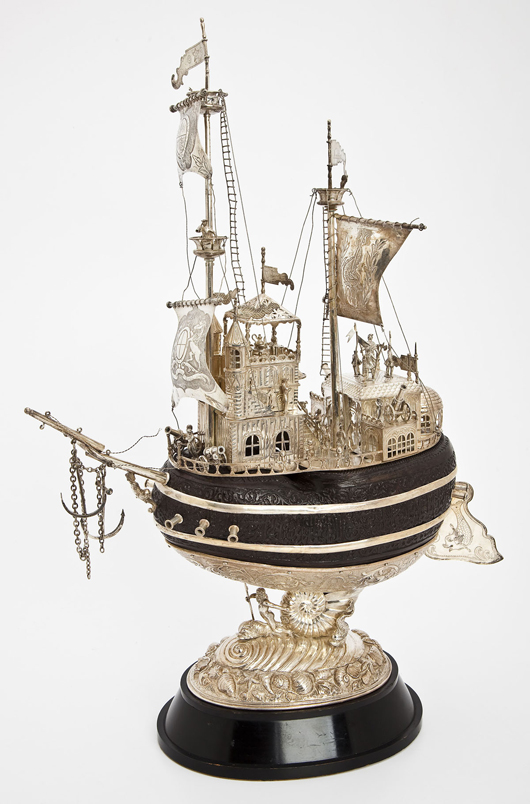 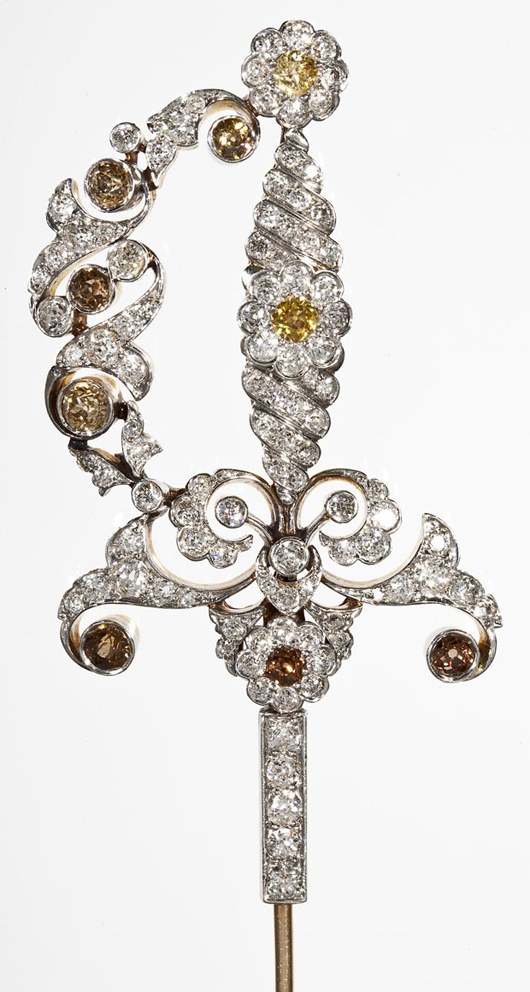 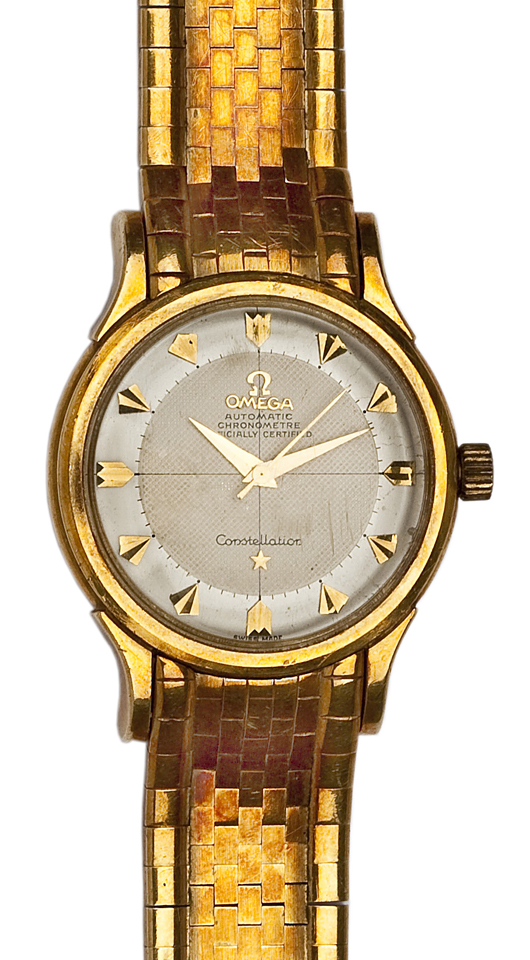 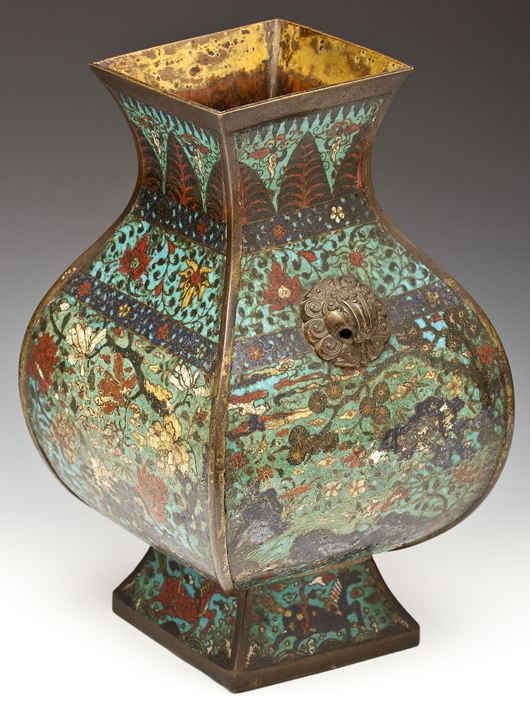 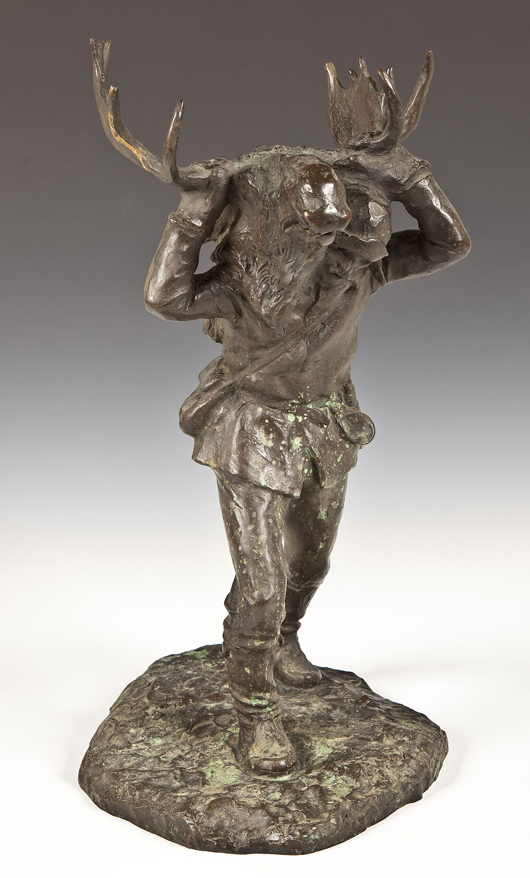 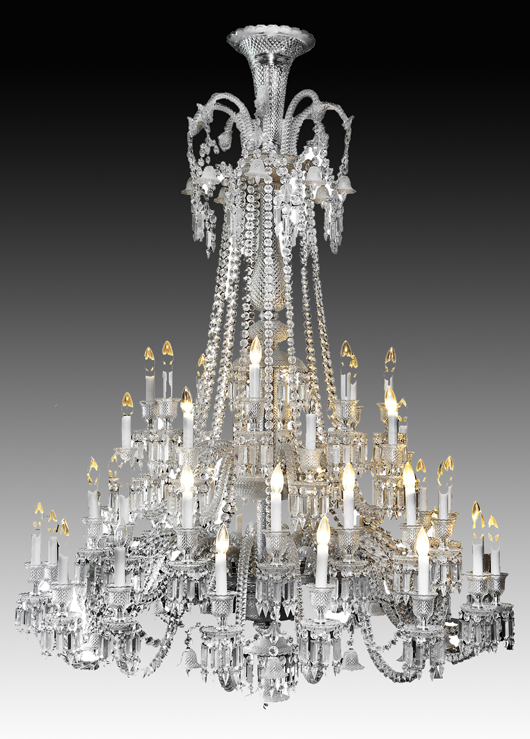