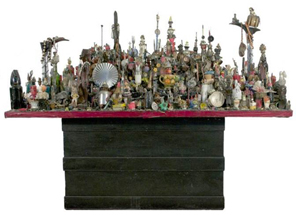 The Rev. Albert Wagner (1924 – 2006), ‘City Beneath the Sea,’ assembled sculpture composed of found objects on a tabletop. Gray’s Auctioneers image.

CLEVELAND – Records were set at Gray’s Auctioneers on Sept. 20 for the assembled artworks of the visionary outsider artist the Rev. Albert Wagner. The sale included 819 artworks grouped into 322 lots, with over 80 percent of these pieces selling at auction – the most ever sold for one artist at Gray’s.

Wagner’s sale results are noteworthy for a contemporary artist, not just in Cleveland but also throughout the U.S. The auction house’s extensive outreach campaign for the sale was met with an overwhelmingly positive response from potential buyers, with over 300 art lovers attending preview and a large number of those returning for the sale itself, which was held live in Gray’s showroom. Bids came in from all over the world, with a significant number of lots heading nationwide and overseas. The sale was a true triumph for Wagner, Gray’s and Cleveland art. 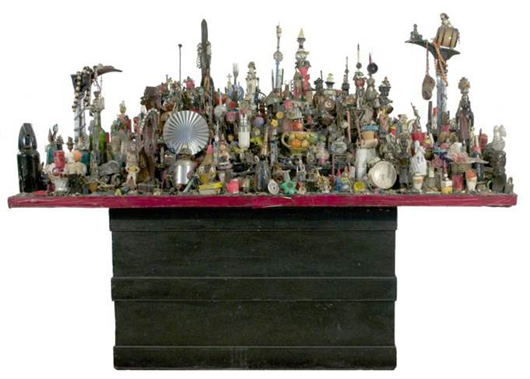 The Rev. Albert Wagner (1924 – 2006), ‘City Beneath the Sea,’ assembled sculpture composed of found objects on a tabletop. Gray’s Auctioneers image.