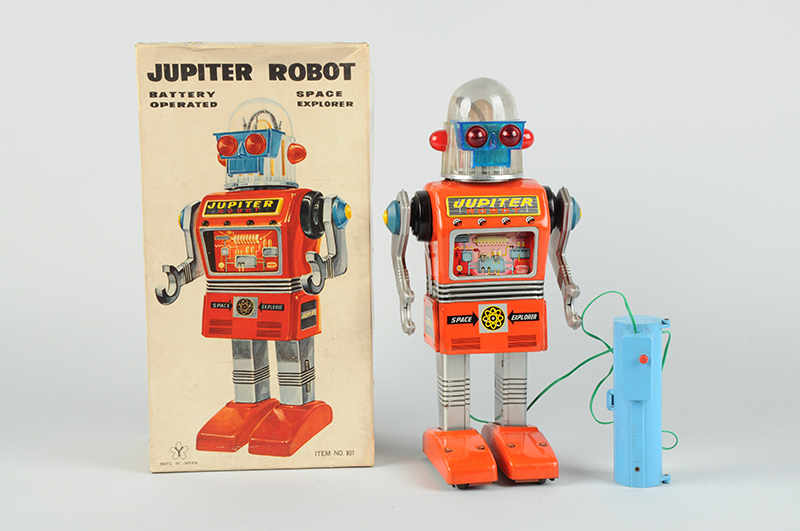 DENVER, Pa. – Robots and space toys landed at Morphy’s May 30-31 Toy Auction with expectations of dominating prices realized, and they did not disappoint. The prized grouping of 115 extraterrestrials, highlighted by the Robert V. “Bob” Gallegos collection, claimed four positions within the top 10. In all, the 1,843-lot sale totaled $1.62 million, inclusive of 20% buyer’s premium. Internet live bidding was available through LiveAuctioneers.

Occupying the coveted number one slot was a rare, boxed Jupiter Robot with original box (shown above). As complete as it could possibly be, retaining its original sky blue plastic remote control, the domed space explorer with provenance from the Robert Lesser collection finished near the top of its estimate range at $36,000.

A classic space vehicle that every collector dreams of owning is the 12½-inch tinplate Super Cycle, a depiction of a well detailed, futuristic “flying” motorcycle with dark green rubber driver. The example offered by Morphy’s came complete with its vibrantly colorful original box emblazoned with Japanese writing and a realistic likeness of the toy, aloft and with rear jet blasting. Against an estimate of $1,200-$1,800, it was bid to an astonishing $21,000. 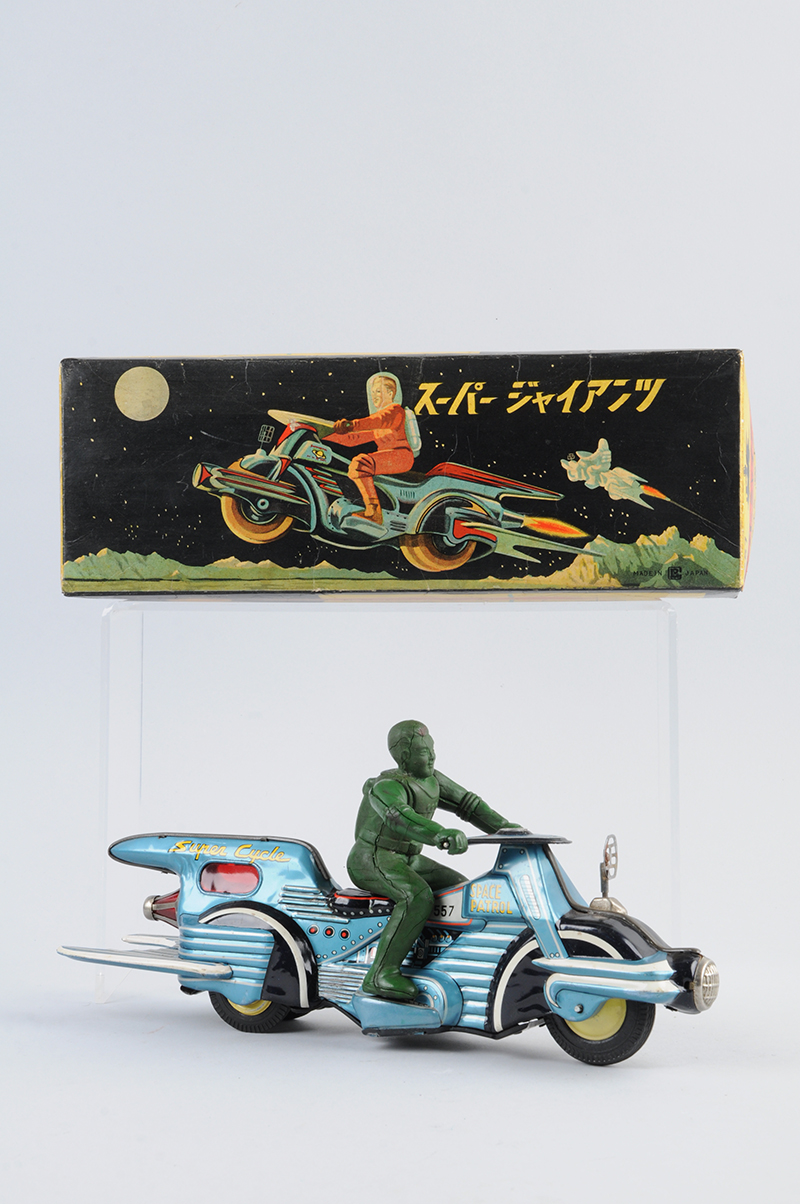 Standing 15 inches tall, a skirted Radicon Robot – one of Masudaya’s famed “Gang of Five” – came with provenance from the legendary F.H. Griffith collection. Paired with its original remote control with vertical antenna, the austere gray metal robot with original box exceeded its high estimate at $15,600. 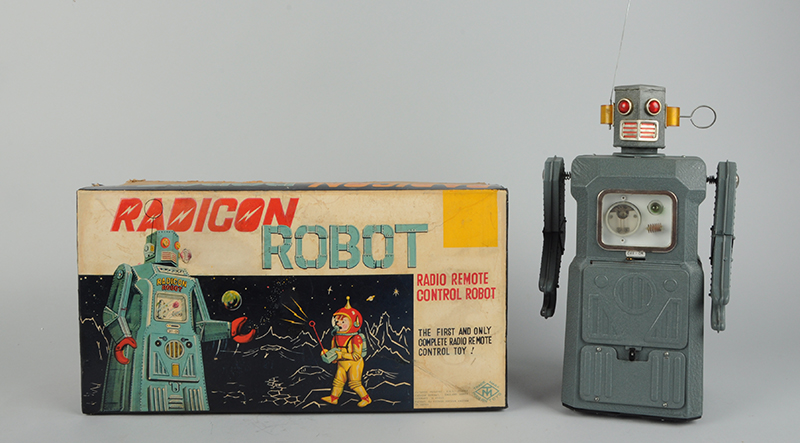 Bright red with a fantasy face, sparking chest screen and radar dish atop its head, a Tremendous Mike Robot by Aoshin Shoten was another legacy of the Robert Lesser collection. Accompanied by its extremely rare original box, the wind-up toy surpassed its high estimate with a winning bid of $13,200. 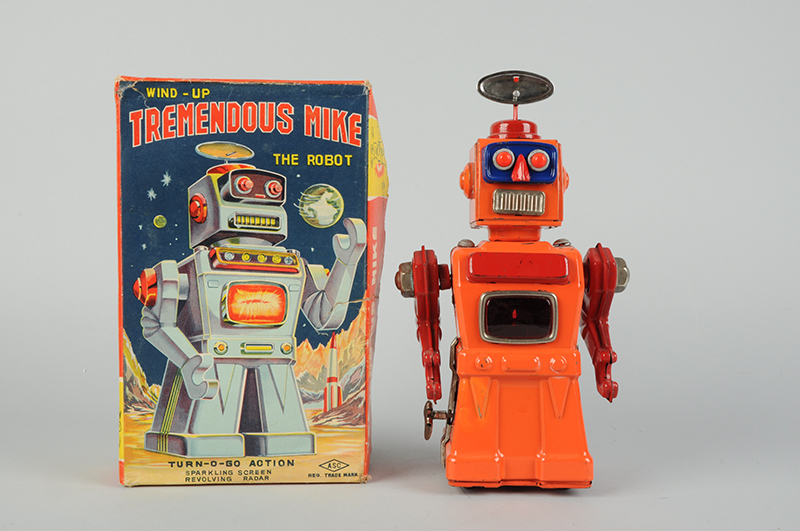 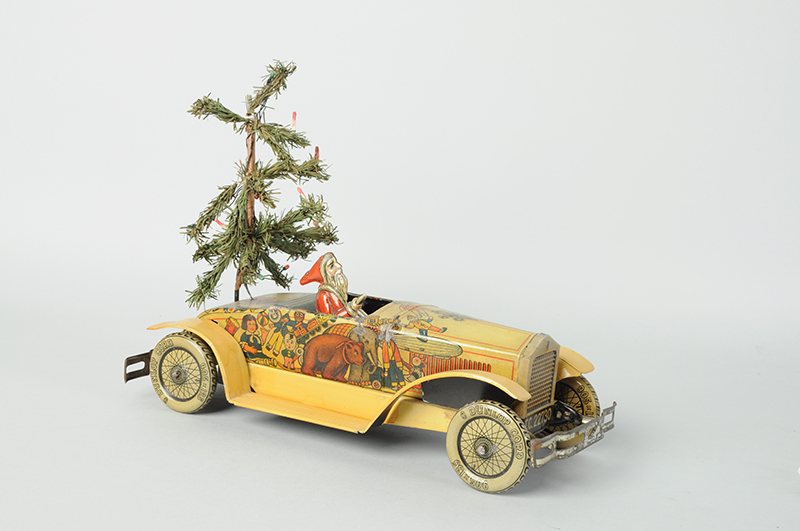 The ultimate crossover toy, a Tippco (German) lithographed-tin Santa Claus auto combined 1930s roadster styling with Christmas toy graphics and an upright, illuminating feather tree as its cargo. At the wheel, a lithographed Santa figure was in charge, “dressed” for an open-air spin in his long red robe and cap. A beautiful, richly colorful toy, it came with very special provenance. Not only was it part of the late Peter Ottenheimer’s private collection, it was also featured in his now-classic book “Toy Automobiles.” Estimated at $12,000-$18,000, it glided to a $30,000 finish.

With size on its side, a 20-inch Distler No. 85 tin-litho racer with helmeted driver was designed with illuminating headlights, faux vents at either side of its bonnet, and tin “balloon” tires marked “Dunlop Cord.” Bright red and in near-mint condition, the racer swept past its $8,000-$12,000 estimate to settle at $21,000. 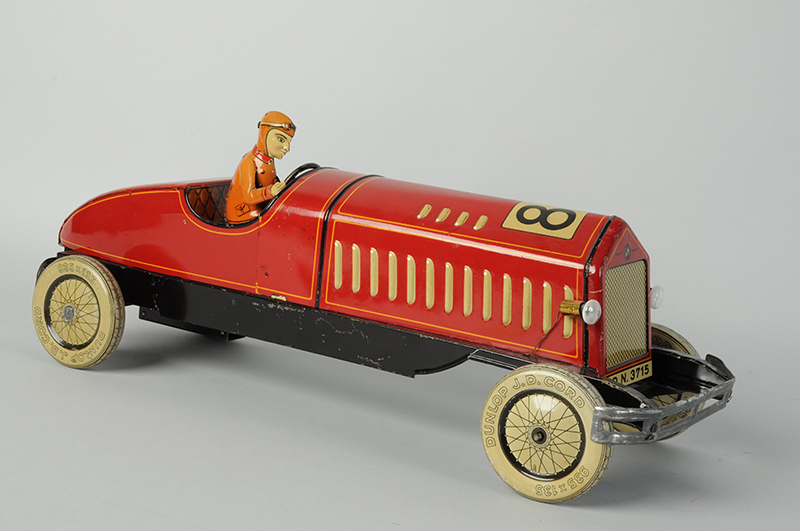 More than 50 lots of Popeye toys came out swinging, with a very rare Linemar battery-operated Popeye & Olive Oyl Tank leading the group. Entered with its profusely illustrated box in vivid red, yellow and blue, the toy muscled its way past a $6,000-$9,000 estimate to reach $16,800. 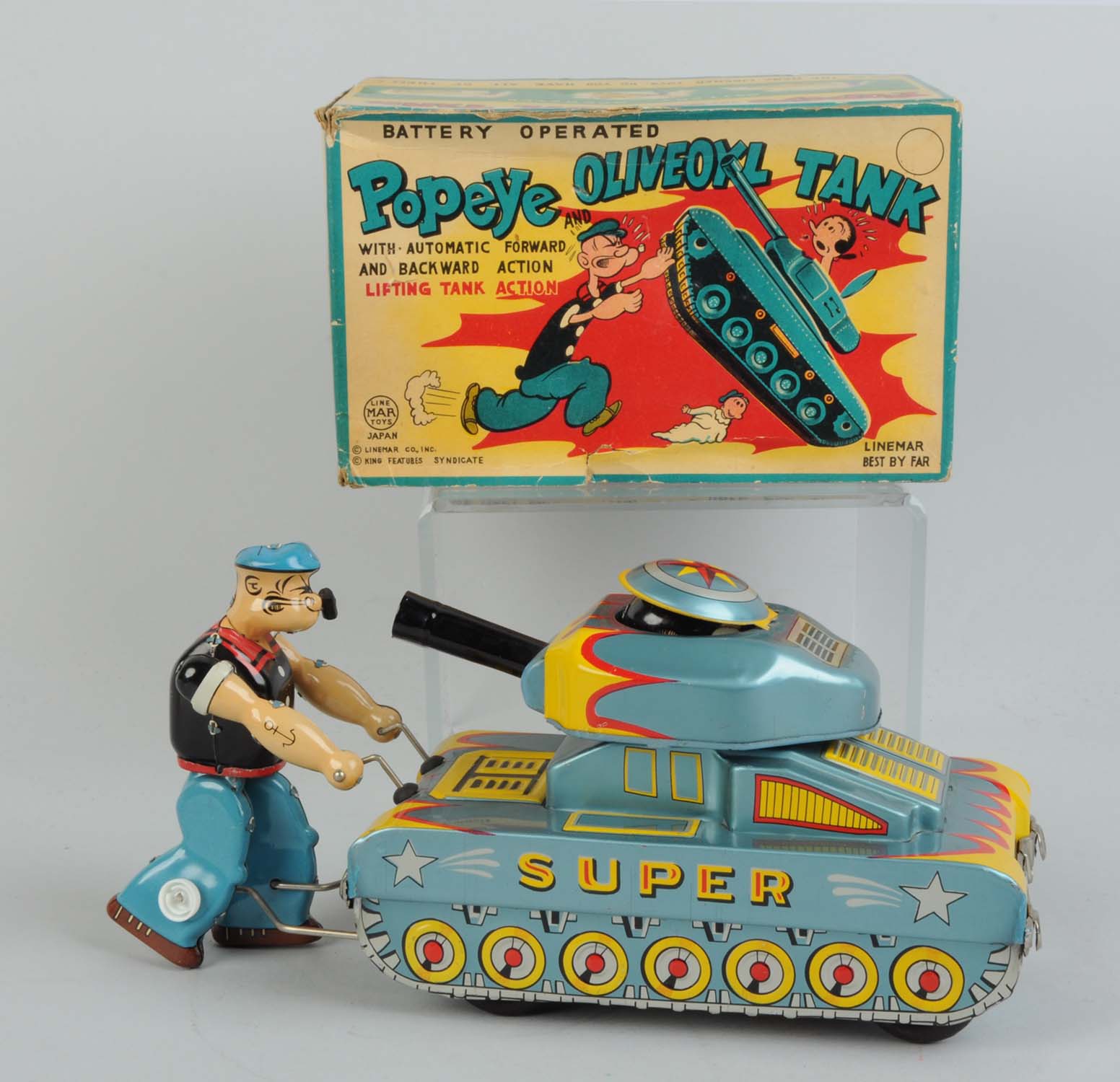 From a much earlier era, a boxed 1924 Nifty (attrib., distributed by Geo. Borgfeldt & Co.) tin wind-up toy depicting comic strip protagonist Barney Google alongside a jockey and his horse Spark Plug doubled its high estimate at $16,200. 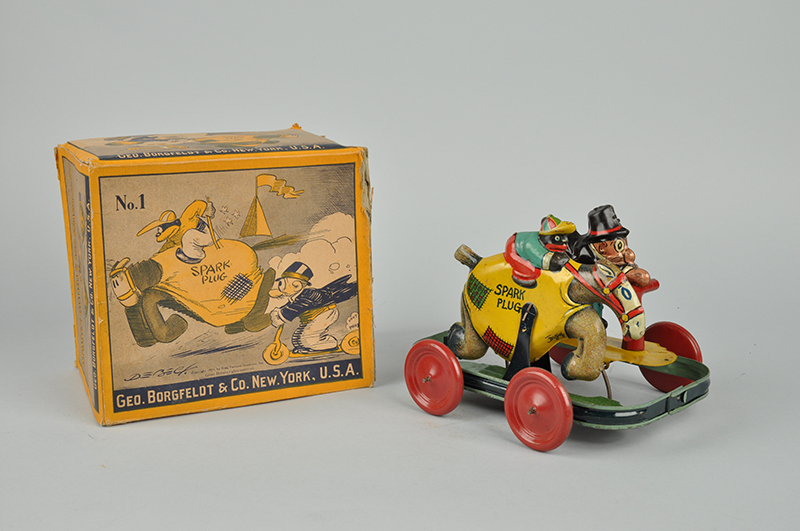 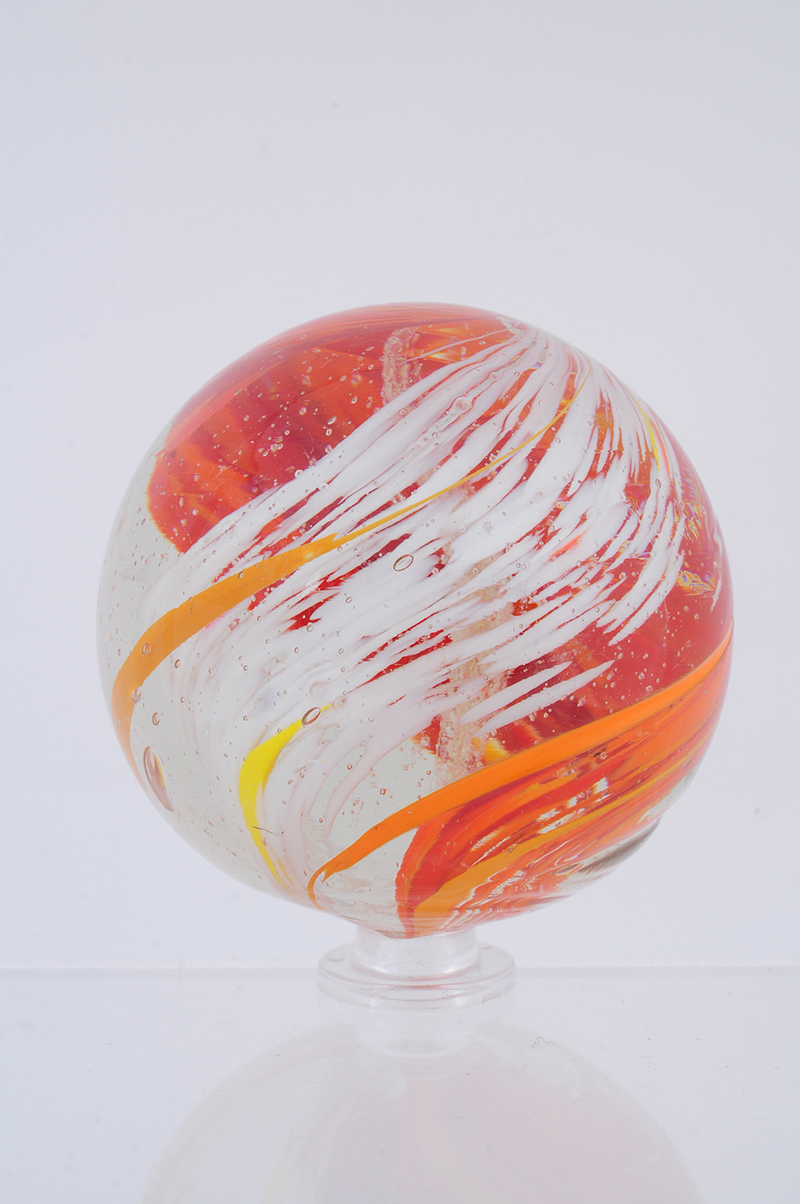 There were many buying opportunities for cast-iron mechanical bank fans. Among the favorites were a J & E Stevens “Perfection” registering bank and a Shepard Hardware Co “Circus” bank, shown below, with original factory wood box and key. Each bank cashed out at $16,200. 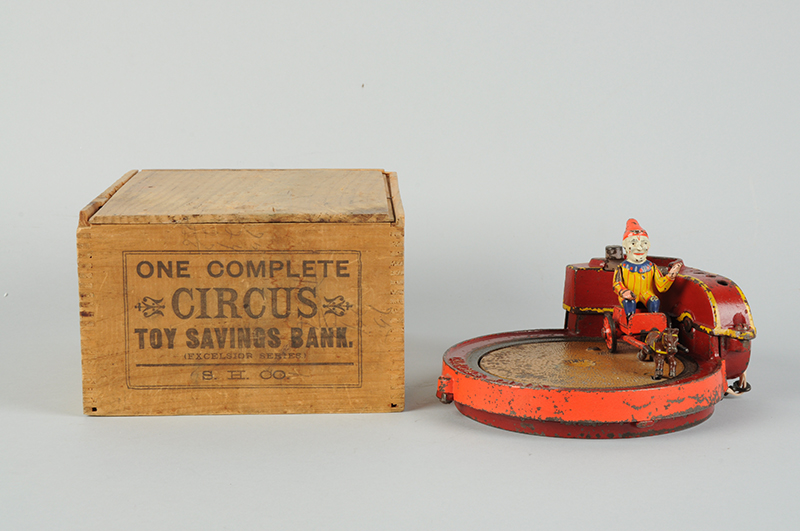 View the fully illustrated catalog from Morphy’s May 30-31 auction, complete with prices realized, at www.LiveAuctioneers.com.