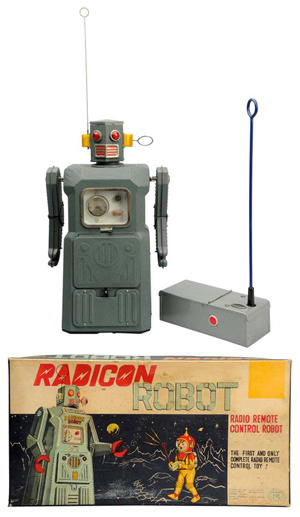 DENVER, Pa. – “We knew the robots were going to take off, but we had no idea the sale was going to turn into such a landmark event for collectors. The excitement level was through the roof,” said Morphy Auctions CEO Dan Morphy, describing the scene at his company’s Sept. 6-7 Toy Auction. LiveAuctioneers provided the Internet live-bidding services.

The centerpiece of the 1,122-lot offering was the renowned Enzo Pertoldi collection of vintage robots and space toys, which had traveled from Italy to take the spotlight at Morphy’s. When the last of the lunar dust had settled, pieces from the Pertoldi group decisively occupied all of the top 10 slots in the $1,032,000 auction. All prices quoted in this report are inclusive of 20% buyer’s premium.

The leader of the pack was a battery-operated Radicon Robot from Masudaya’s “Gang of Five” series. Like most of the other robots in the collection, the 14¾in, gray textured-metal Radicon was made in Japan. Accompanied by its unusual remote control and colorful original box, it commanded a winning bid of $37,300 against an estimate of $10,000-$15,000.

Another great favorite with collectors was the 7¾ in lithographed-tin wind-up Interplanetary Explorer Robot made by Naito Shoten. The rare, vividly graphic factory box depicting a helmeted explorer in space, his rifle shooting off sparks, played a big part in achieving the runner-up price of $22,800 against a presale estimate of $2,000-$3,000.

Not far behind was an 11in tall Nomura Radar Robot, known to collectors as “Topolino” (the Italian name for Mickey Mouse) because of its upright ears. A rare boxed example, it shot to $18,600, more than double the high estimate. Achieving the same money at $18,600, a Masudaya tin-litho Space Patrol with Suctorial Missiles came complete with its original box designed for use as a target. The crude, early space-theme box graphics, coupled with the naïve imagery on the toy, drove the lot to six times its high estimate.

“This sale proved that robots are stronger and in greater demand than ever before, especially those that are rare, boxed and in superior condition, like the ones in Enzo Pertoldi’s collection. We had great live, phone and Internet action, and international buyers – especially the Japanese – were very competitive throughout,” said Morphy. “After the auction, our robot expert, Mark Bergin, said we had broken more than 40 individual price records and that it was the strongest robot sale he has seen to date.”

Enzo Pertoldi, who spent 35 years presciently amassing and refining his incomparable collection, also had words of praise to offer. He described the auction results as “extraordinary and unbelievable.”

Part II of the late Ray Jones and Theresa Jones collection of antique occupational shaving mugs, which opened the sale, also brought significant prices. A gilt-finished china mug with a realistically painted image of a greenhouse tripled its estimate at $6,600; while a shipbuilder’s shaving mug depicting a craft under construction sailed to $4,800 against an estimate of $800-$1,200. With crossover appeal to collectors of sports memorabilia, a mug with the image of a baseball player sliding into second base doubled its high estimate to finish at $3,600. 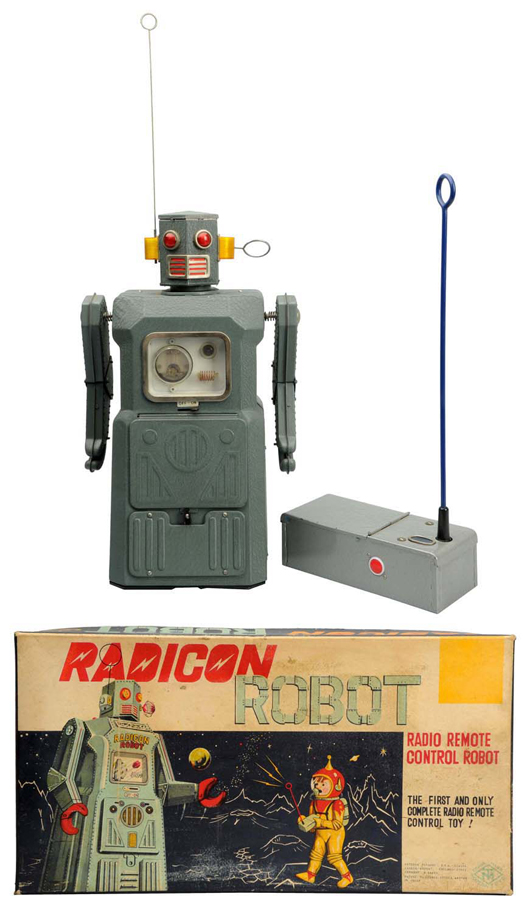 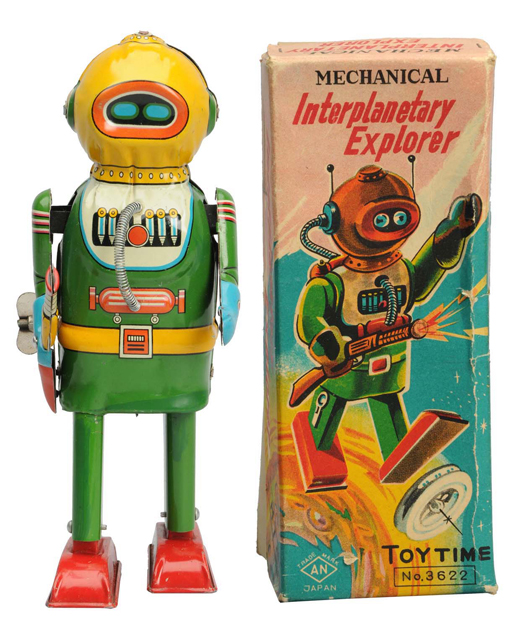 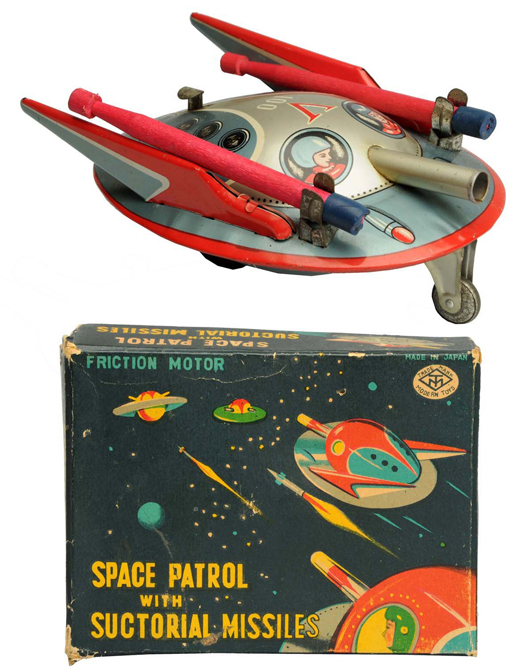 Masudaya Space Patrol with Suctorial Missiles and original box designed for use as a target, $18,600. Morphy Auctions image. 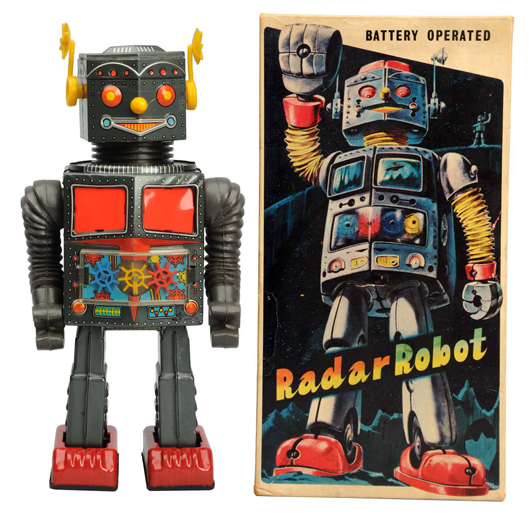 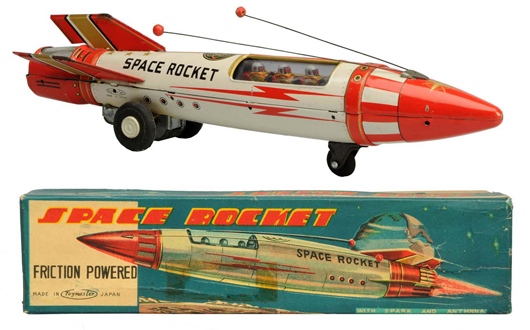 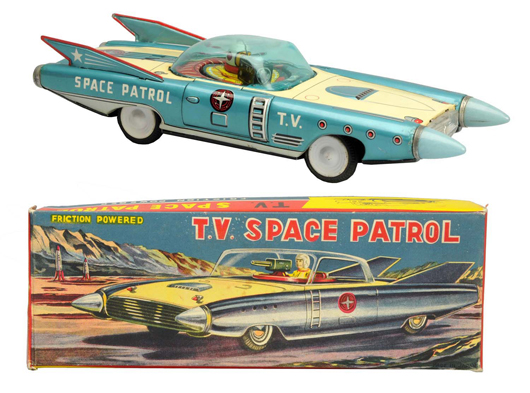 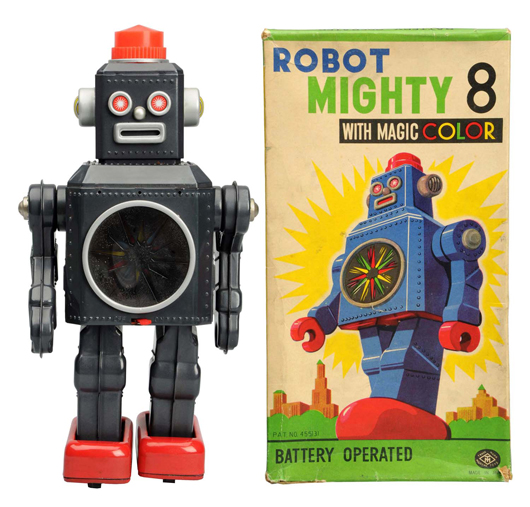