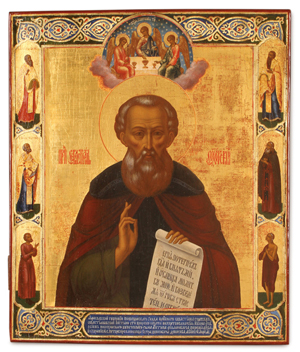 CEDAR FALLS, Iowa – Two sessions and $2.75 million in sales – that was the net result of the June 3-4 auction at Jackson’s International. Nearly a half million dollars of the total came from buyers who had bid onine through LiveAuctioneers.

“It helps when you have good, fresh to the market material,” said President and CEO James Jackson. “As anyone in the trade can attest, it is easier to sell a really nice $100,000 item than a really nice $500 item,” Jackson continued. “Furthermore, we were happy to see the Russians passionately participate, yet even they are becoming more refined in their collecting tastes. Ten years ago, one could put anything Russian on the block and a multitude of Russian buyers would duke it out. Now, after the international market crash of 2007-2008, the dust has settled, inventories are up, and boring does not sell.”

The auction featured three main collections including Russian icons and European works from the estate of the late Dr. Edward B. Gerber (1928-2013) of Reno, Nevada; Spanish Colonial works from the noted collection of Puerto Rico native Antonio Roig Ferre; and the lifetime Asian collection of Joan McBride of St. Paul, Minn.

The auction opened with Russian icons, something in which Jackson’s International has developed a global following. The first lot to cross the block was an icon of the Archangel Mikhail, painted in the Western style around the year 1890. It sold to the phone for $37,500. The next three lots (all icons and all executed between the years 1855-1910) were representative of the late style that is extremely popular with nouveau riche Russian collectors as evidenced by the fact that each sold for an astounding $125,000 against estimates $10,000-$15,000 or less.

“Ironically,” noted Jackson, “one can purchase a very excellent icon of the same size, but 250-300 years older, right now for a fraction of the price of which some of these later icon examples are selling for. In my estimation, these old icons are probably a good bet as these will surely rise in value again.”

Some other icons were of note, including lot 6, a signed icon from the workshop of Ivan Malyshev and dated 1882, the 14 x 12 inch gilt-panel depicting saints Kosmas and Damin, sold to a buyer in St. Petersburg, Russia for $55,000. Lot 22, a Russian icon of St. Nicholas, from around the year 1900, with silver-gilt and enameled riza, sold to a buyer in Paris for $40,000. Lot 37 represented the current craze for icons which depict images of individual saints with popular contemporary names. This example, dating to around 1900, and depicting a waist up image of the warrior saint, Dmitry, was estimated at only $3,000-$5,000, yet ended up selling to a buyer in Moscow for $40,000.

Russian decorative arts also fared well, although there is a noticeable slowdown (some dealers would even say price correction) when it comes to unspectacular silver and enameled objects, regardless of the maker. Nevertheless, lot 131, a small (1 1/4 inches) Faberge gold and enamel badge, for the Imperial Russian yacht Tsarevna, sold to a Russian phone bidder for $20,000. Other items of note include a small (4 inches) Faberge agate kovsch with hairline made $7,500, and a 3 1/2-inch gold kovsch by Tilander, finished at $10,000.

A battle-worn Imperial Russian regimental banner from the reign of Paul I, circa 1800, sold to a Russian collector for $40,000 and an Imperial Russian bombardier officer helmet of the Grenadier Regiment, circa 1760s, also sold to Russia for $22,500. An interesting Russian Orthodox embroidered sticharion (church vestment) from the coronation of Csar Nicholas II sold for $21,250 and a unique embroidered, velvet folio with Soviet period inventory label, identifying it as previously belonging to Csarevich Alexi Nikolaevich, sold for $6,250.

Some Russian porcelain sales and other decorative arts worthy of note include a set of 10 Kornilov Brothers porcelain plates with traditional winter scenes, which sold to a Russian phone bidder for $17,500. A Russian porcelain cup and saucer from the Imperial Porcelain Factory did $7,500 and a charming, little Russian porcelain tête-à-tête service by Kornilov finished at $5,250. Lastly, a group of unique North Russian carved wood utensils comprising a figural skopkar and five wooden scoops, all deaccessioned from a Wisconsin museum, totaled $9,000.

Next to sell were European works, leading off with lot 327, a fine gothic gilt-copper and enamel processional cross, 13th century and in an excellent state of preservation, finished at $23,750. It was followed by a pair of late 19th century Belgium cast-bronze angel candlestands, which sold for $15,000. A French carved alabaster angel resting on a marble, gilt-bronze mounted stand sold for $11,875, and a pair of 19th century French bronze figural candlestands made $10,625. A group of four paintings depicting the scenes of the life of the Virgin by Mexican artist Nicolas Enriquez, each signed and dated 1765, and measuring 11 x 9 inches sold for $28,160. An interesting 18th century Cuzco School painting, titled The Three Trinities, finished at $8,750. Other artworks worthy of note include a lovely 19th century carved marble figure of Cleopatra by the Italian sculptor Giuseppe Gambrogi, which sold for $23,750 as well as an unsigned bronze relief panel depicting Socrates and his disciplines, circa 1953, by noted Croatian artist Ivan Meštrović (1883-1963), which sold to a Texas buyer for $21,250.

The second session opened with a small offering of American art beginning with a handful of estate-signed paintings by William Glackens (1870-1938) which, with the exception of a small (18 x 14 inches) floral still life that came in at $13,750, went unsold. However, that was not the case for the three Marvin Cone paintings that followed, all of which saw active bidding, A small oil on board sketch of a stone quarry by Cone came in at $119,000. That was followed by a 9 x 22 inch red barn scene, which made $68,750, and a still life measuring 18 x 15 inches did $32,500. A large, lovely spring landscape by Indiana artist Edward Williams (1870-1950) made $47,500 and the bronze Duck Baby fountain by Edith Parsons, with verdigris patina, finished at $9,375.

The rest of the sale featured, to a large degree, Asian works from the Joan McBride collection. This session opened with a bronze figure of famous Indian Nobel Laureate Rabindranath Tagore. Sculpted by French artist Paul Paulin (1852-1937), the 1921 effigy sold to a buyer in India for $20,480 against an estimate of $2,000-$3,000. That was followed by a Sino-Tibetan gilt-bronze Buddhist figure which sold to an in-house bidder for $11,520. Next up was a 19th century Sino-Tibetan gilt-bronze figure of Bodhidharma which sold for $9,375 to the same in-house bidder. An interesting Tibetan gilt-copper repoussé plaque sold for $11,875, which was followed by a 6-inch Chinese carved jade water coupe, which sold for $11,250. Whereas a Chinese carved white jade double water coupe finished at $12,800, and a Chinese carved celadon 6-inch plate made $7,680.

Chinese and Japanese jades saw considerable interest with some renewed interest in the previously soft Japanese market, although it seemed apparent that the recent ivory ban likely hampered sales. More Asian works of note include a small Chinese carved and polychrome erotic panel (9 1/2 x 7 1/2 inches), which sold for $14,000 against an estimate of $200-$400. A Chinese carved rosewood and jade mounted altar stand sold for $10,240, and an interesting Japanese carved ivory and rootwood climbing monkey sculpture finished at $8,125. Asian works concluded with a small offering of contemporary art followed by Tibetan or Mongolian silver and jade mounted objects. Of the modern Asian art, the top lot was a 26-by-36-inch oil on canvas painting by Vietnamese artist Le Pho (1907-2001), which finished at $37,500. That was followed by a watercolor courtyard scene by Chinese artist Fang Xiang (b. 1967) and three Le Pho oil on canvas floral still lifes, which totaled $47,360. A Chinese Mongolian-style, silver-lidded jar with hard-stone mounts sold for $11,520, which was followed by a Chinese silver-plated and hard-stone mounted seal box, which made $15,360, and three Chinese Mongolian-style jade and silver-mounted swords totaled $42,000.

Asian works were followed by a mixed offering of European decorative arts including a black-forest Swiss-carved figural game clock, which sold for $9,375. A three-piece French bronze hunting motif garniture sold to Russia for $20,480. A German carved wood and polychrome lusterweibchen chandelier came in at $9,375, and a carved and gilt-wood Lyon and Healy concert harp sold for $17,920. Other European glassware, porcelain, and decorative arts worthy of mention include a KPM plaque depicting the Holy Family, selling for $6,875, a 7 1/2-inch Galle carved and fire-polished vase bringing $7,500, a Daum Nancy cameo glass chandelier making $6,250, an 8-inch elephant’s vase by Charles Catteau for Boch Freres selling for $1,750, and a pair of contemporary art glass vases by Dante Marioni which sold for $6,150.

The sale finished with a small collection of mostly contemporary jewelry from a private, Midwest collection featuring a ruby and diamond cocktail ring, circa 1935, which sold for $10,000. An Art Deco ladies diamond and sapphire platinum filigree ring made $8,125, a Tiffany moonstone matching necklace, bracelet and earrings set, circa 1940, did $6,400, and a contemporary Sophia D diamond-and-platinum bow necklace went for $5,000. 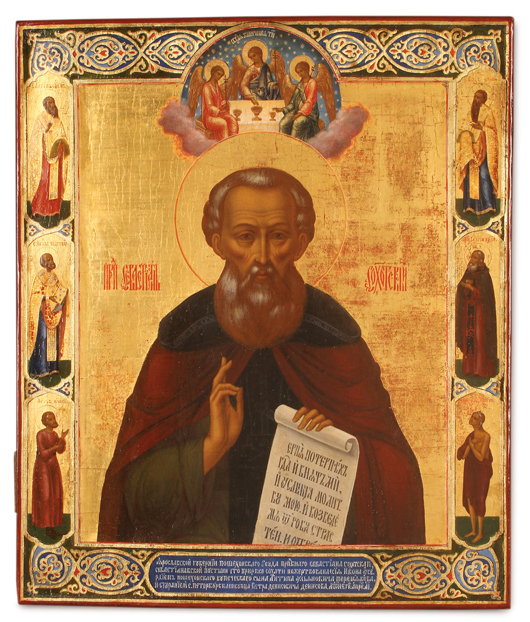 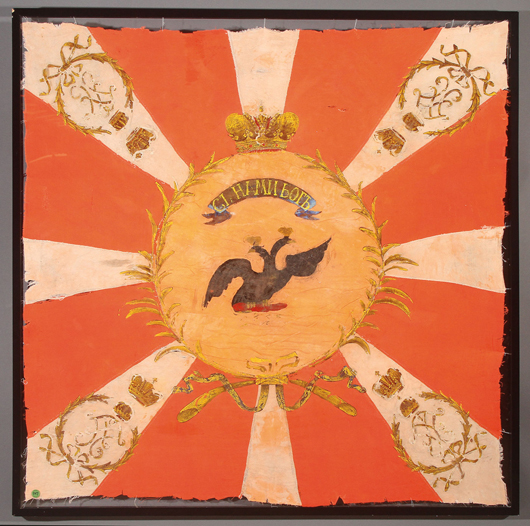 This weathered Imperial Russian regimental banner from the reign of Paul I, circa 1800, sold for $40,000. Jackson’s image. 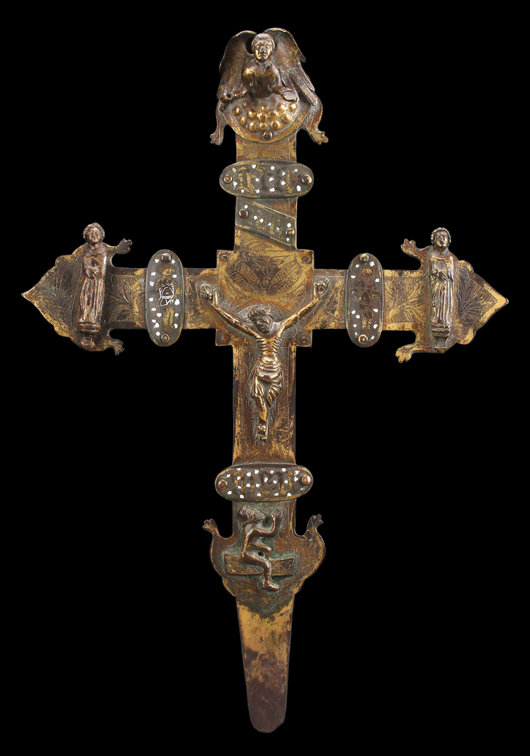 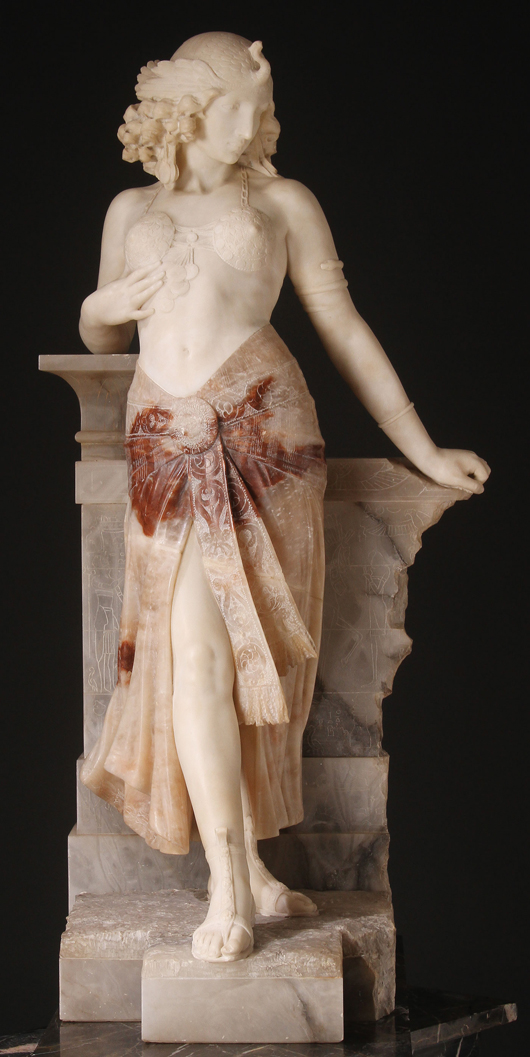 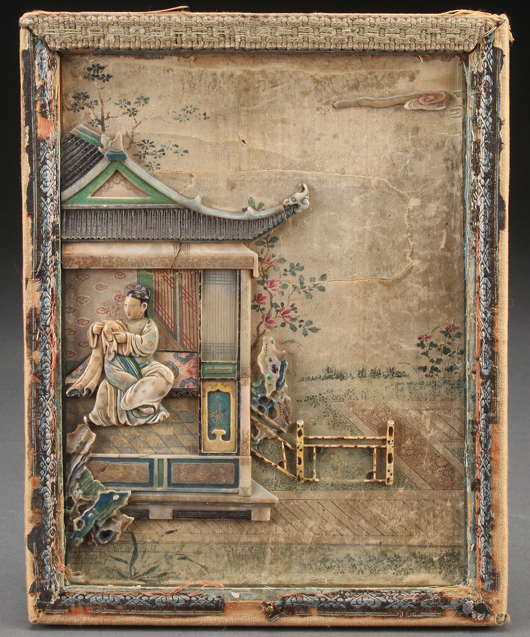 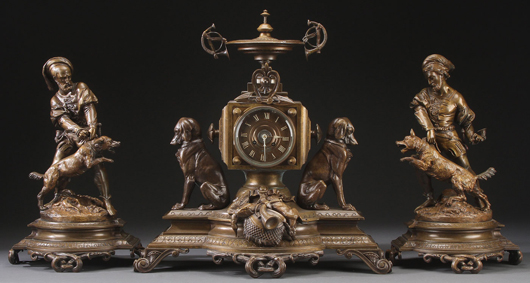