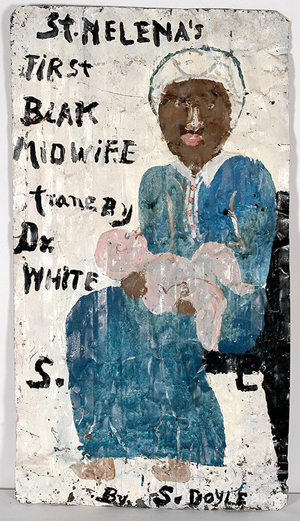 The painting, 28 inch by 50 inches, was created from house paint on found roofing tin. It was in excellent condition and depicted Mr. Doyle’s grandmother, a midwife, holding a newborn baby. It was the top lot of the April 26 session, dedicated to Visual Blues (folk art, typically from the Deep South). The April 27 session was themed Delta Blues and featured photographs, concert posters, records and more.

“We married two entirely American-born and inspired phenomena, folk art and the blues, into one massive two-day sale, and it went very well,” said Amy Slotin of Slotin Folk Art Auction, based in Gainesville, Ga. “It was one of our most successful auctions to date. Bids poured in literally from around the world, prices were strong and several world records were shattered.”

The auction came on the heels of another successful sale held by the firm on Nov. 9-10, also in Buford. That event, a Masterpiece Sale (Slotin Folk Art Auction has held many of those) was packed with around 1,200 lots of folk art creations. The top lot of that auction was an enamel on wood painting by Howard Finster (1916-2001) titled Vision of Mary’s Angel. It fetched $51,600.

“It is heartening to know that, even now with the economy still in a state of recovery and many collecting categories seeing a downturn in sales, prices and the market for self-taught art seems to be on an upswing and stronger than ever,” Slotin said. “The November Masterpiece Sale grossed $1.1 million, which astounded us, then the April auction did even better – $1.2 million.”

Following are additional highlights from the April 26-27 auction. All prices quoted include a 20 percent buyer’s premium. Online bids, phone bids and left bids combined totaled around 3,000. About 200 people attended the auction.

An important and rare folk art sugar chest in the form of a desk, made circa 1825-1850 by an unknown craftsman – or possibly slaves – in South Carolina, and the only known example of its kind to exhibit such an extraordinary inlay design, changed hands for $36,000. The inlay and apron profiles suggest upstate South Carolina, an area of Southern slave-holding plantations.

An enamel on Masonite painting by William Hawkins, titled Rider on Horseback, 1980, signed and dated, with Hawkins’s birth date, measuring 48 inches by 36 inches (less the frame), gaveled for $43,200; and a graphite and silver pencil on paper by Chris Hipkiss (British husband and wife artists, both born 1964), titled Trans Whispered, rose to $19,200, a new auction record.

Additional record prices were achieved for Herman Bridgers (1912-1990) and the second-tier artist Myrtice West (1923-2000). Bridgers’s Two Churchmens, 1978, made from cutout wood with off-white paint, tar and nail head eyes, hammered for $13,200; while West’s Christ Returns As Church Gets Ready, a paint and glitter on canvas spiritual work, coasted to $11,400.

Two other lots achieved identical selling prices of $11,400. One was a pair of decorated Lee Godie photographs, circa 1970, both black and white with some hand-coloring by Godie and each one 4 inches by 5 inches (one signed). The other was an oil on canvas panel by Minnie Evans, titled Solomon’s Temple, 1963, signed and dated and measuring 20 inches by 16 inches.

A signed, dated (1980) and titled (Hurrying Home) oil on canvas painting boasting beautiful colors by Mattie Lou O’Kelley, with intricate details and great hill scenery, 32 inches by 24 inches, went for $18,600; while a pair of Indian motif whiskey jugs by Cheever Meaders, circa 1960s, done in an ash glaze and initialed on the bottom, each one 8 1/2 inches tall, made $13,200.

To learn more about Slotin Folk Art Auction and the firm’s calendar of upcoming events, call 404-403-4244 or e-mail auction@slotinfolkart.com. 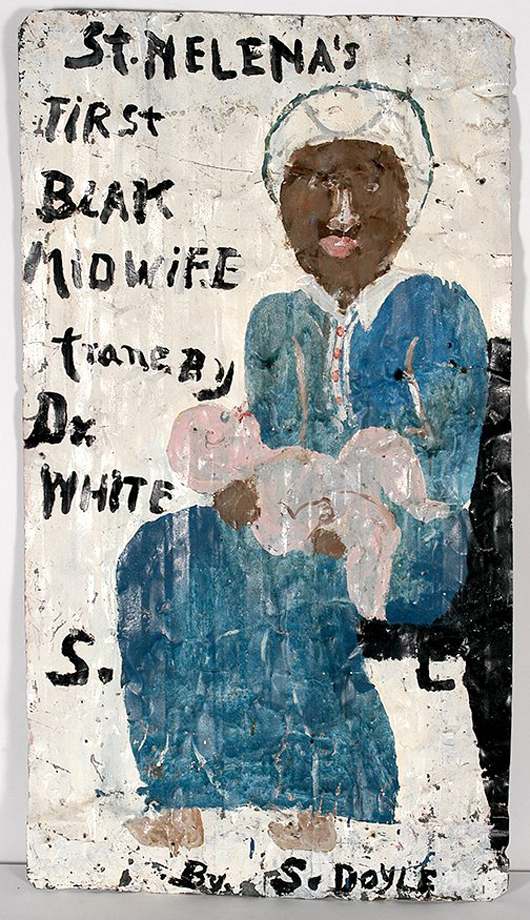 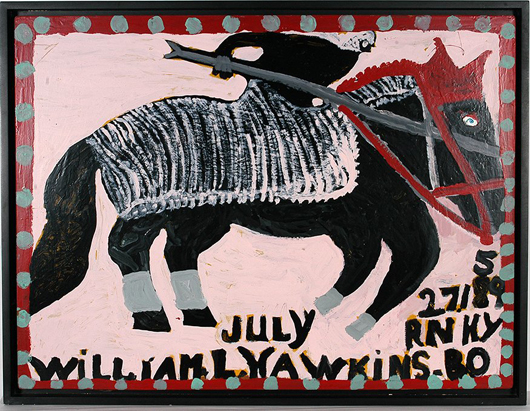 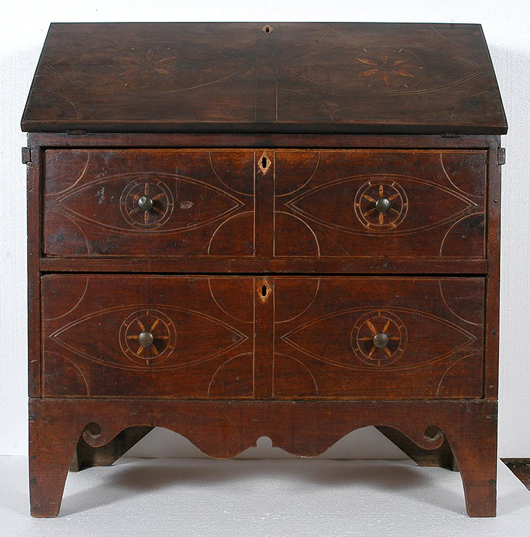 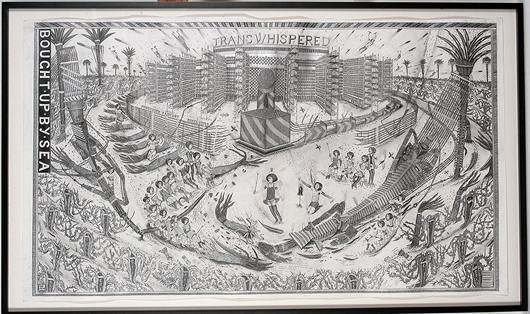 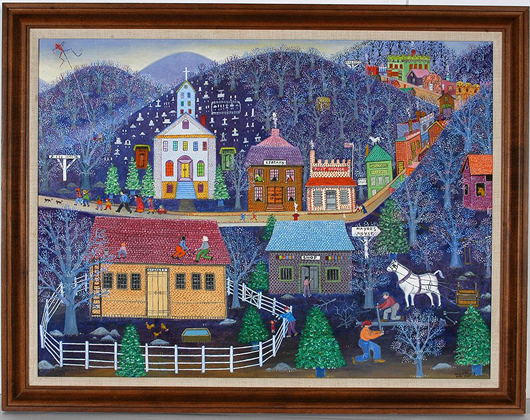 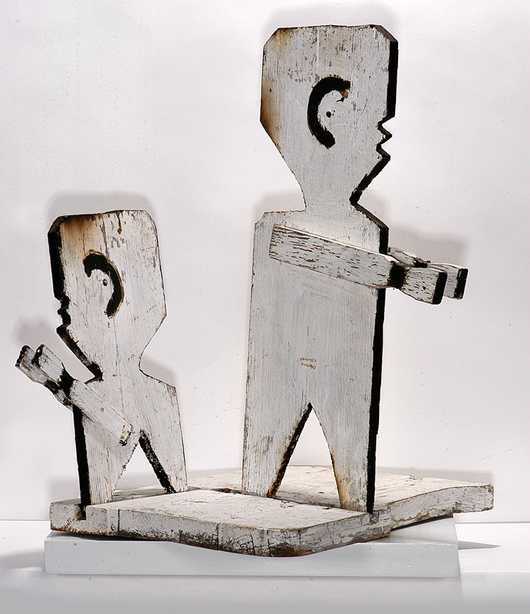 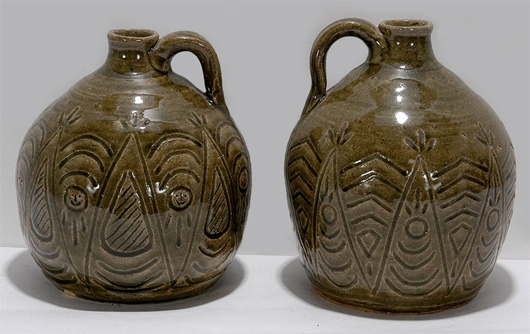 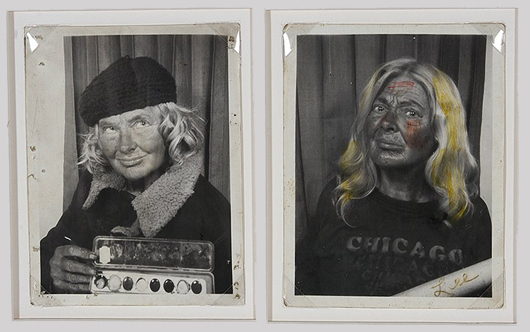