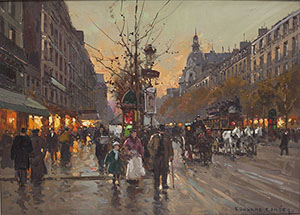 HARRISBURG, Pa. – An oil painting by Edouard Leon Cortes and a comic strip by Charles Schulz each sold for $27,000, and a 5.13 CTW brooch in an unusual form brought $7,000 at Cordier Auction & Appraisals’ Summer Two Day Firearm and Militaria and Antique and Fine Art Auction on Aug. 23 and 24. The 1,048-lot auction was held at the company’s auction house located at 1500 Paxton St. in Harrisburg.

Internet live bidding was provided by LiveAucitoneers.com. More than 45 percent of the gross was attributable to LiveAuctioneers bidders, on both days.

The sale featured items from more than 150 consigners. Almost 200 people were in attendance over the two days in addition to phone and absentee bidders, while more than 3,500 bidders were preregistered to bid over the Internet. Prices quoted are hammer prices; they do not include the buyer’s premium.

Saturday’s sale offered firearms, militaria and collectibles, coins, silver and jewelry. Online bidding for the firearms was enthusiastic. A German DWM 1916 dated Luger hammered at $1,200, and a Colt 1860 Army revolver sold for $1,600 on an estimate of $800-1,200. In long guns, a W.L. Evans Model 1816 flintlock musket sold for $1,200, while a Colt 1878 SxS 12-gauge shotgun with side hammers hammered down at $1,400, within the estimate of $1,000-2,000. A John Moll signed Kentucky rifle sold for $4,100 to an online bidder after spirited bidding. Moll was one on the very early gunsmiths in America. A Parker Brothers “D” grade SxS shot gun with an extra barrel set with matching serial numbers sold for $4,000 after heavy competition to an out-of-state bidder in the room. In militaria and collectibles, an early 19th century A.W. Spies marked saber sold for the low estimate of $800. A large scale model of a Colt 1911 pistol standing 33 inches tall with a moving slide and hammer and removable magazine sold online for $6,500.

Coins featured an 1854 Liberty Head gold piece graded very fine that sold for $1,500, and a 1924 Saint-Gaudens $20 gold piece in choice brilliant uncirculated condition that sold for $1,400. Collectibles offered several notable items including a Continental sterling owl form vessel with articulated wings that sold for $1,800. The athletic medal archive of Clara M. Schroth (born in Philadelphia), which included medals for gymnastics as well as track and field, sold for $900 after heavy bidding. A Baily, Banks & Biddle sterling water pitcher in a floral and scroll motif sold for the high estimate of $750.

Sunday’s session featured furniture, ethnographic and Asian arts, collectibles and textiles, decorative arts, art, clocks and lighting. The day opened with furniture, a highlight of which was a Pennsylvania walnut Chippendale high chest that sold to an online bidder for $3,400. A stunning oak side-by-side desk and bookcase sold to the room for $900, exceeding the estimate of $500-750. Two antique Persian Serapi room-size rugs sold for $3,400 each. In Asian Arts, a Chinese scholar’s stone hammered down at $1,100 and a Chinese Qianlong cloisonné candlestick sold for $4,900 after heavy bidding.

The star among collectibles was an original hand-drawn comic strip by Charles M. Schulz (American 1922-2000) that sold after enthusiastic bidding for $27,000. Another lot that drew aggressive bidding was a Leica M3 35mm camera outfit that sold to a floor bidder for $2,400. There were a number of lots from the family of Robert Fleming (Pa. senator 1836-1839) including the Pennsylvania Senate chair of Robert P. Allen (Robert Fleming’s son-in-law, Pa. senator 1875-1878) that sold to an online bidder for $450. Another outstanding lot was an applique album quilt top that finally hammered down to the Internet for $1,200.

Among porcelain, pottery and glass, 10 pieces of Royal Copenhagen Flora Danica sold for $2,300 on an estimate of $1,500-3,000. An art glass vase in the King Tut pattern attributed to Durand saw spirited bidding before selling to the Internet for $800, just over the $400-600 estimate.

Art buyers had an eclectic mix to choose from. A mixed media by Edna Hibel (American, 1917- ) depicting a mother and two children sold to an online bidder for $850. The Ned Smith (American, 1919-1985) print Dutch Country Bluebirds sold to the floor for $1,200. An art archive of Henry A. Wright that included etchings, crayon drawings and poems, and the artist’s personal notebook, sold after enthusiastic bidding for $600. The star of the art category was a Parisian street scene by Edouard Leon Cortes (French, 1992-1969), which hammered down to a phone bidder for $27,000 after enthusiastic bidding.

Questions can be directed to mhartman@cordierauction.com or by calling 717-731-8662. 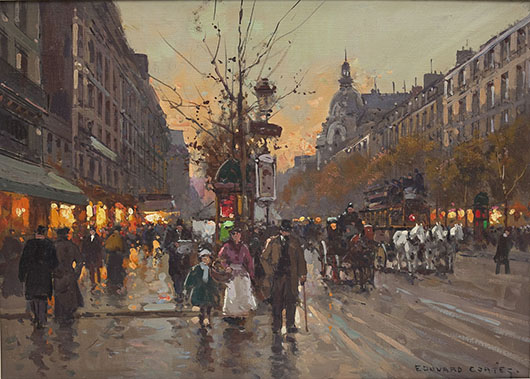 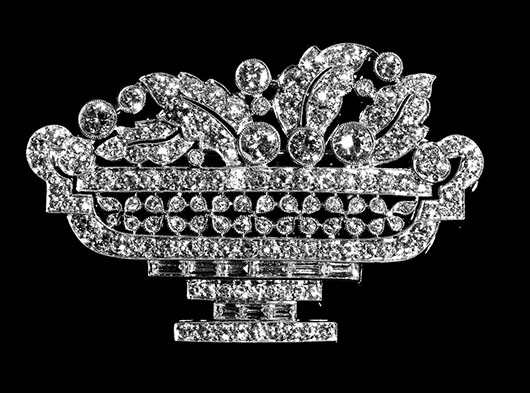 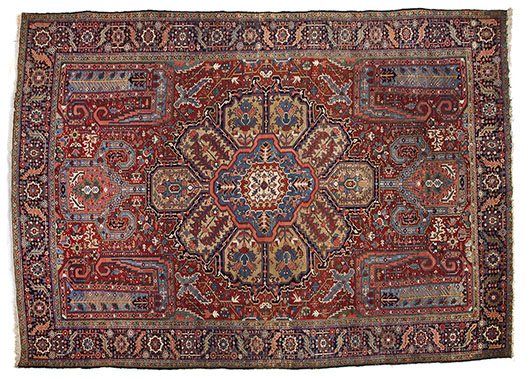 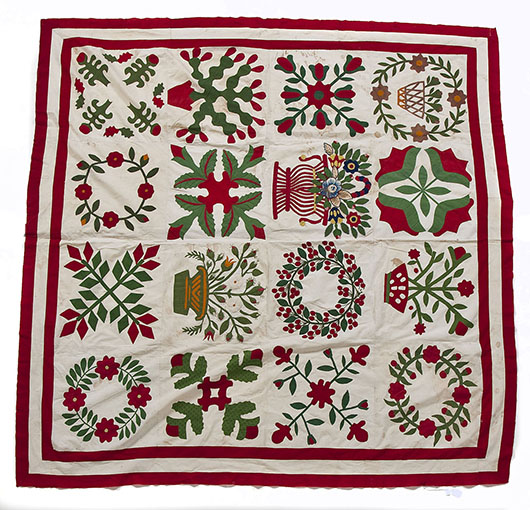 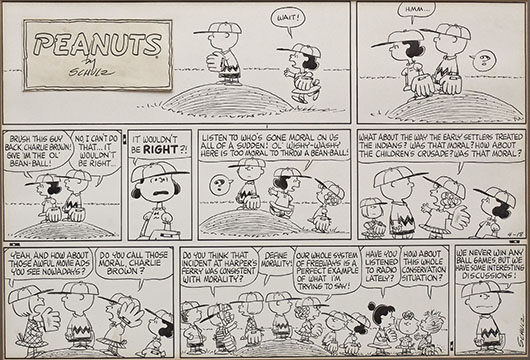 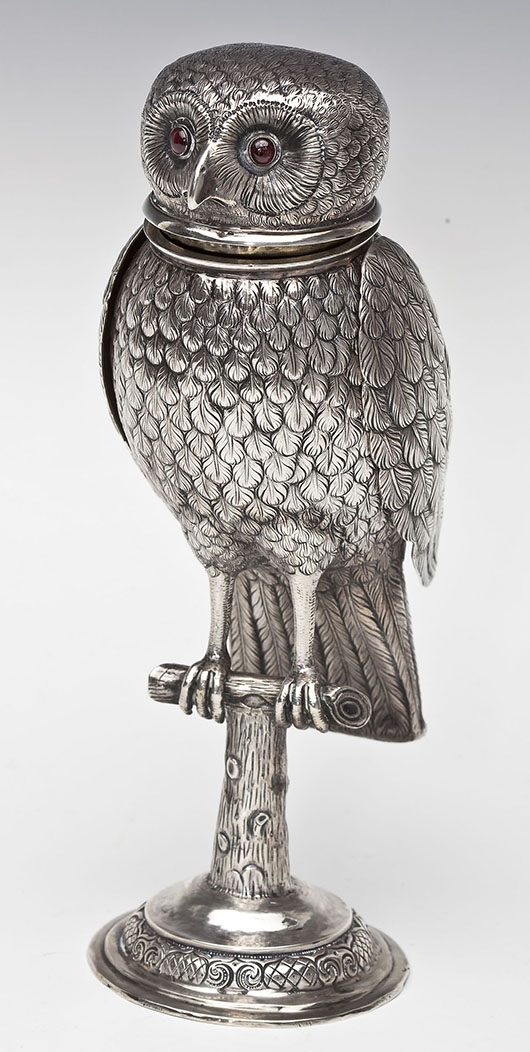 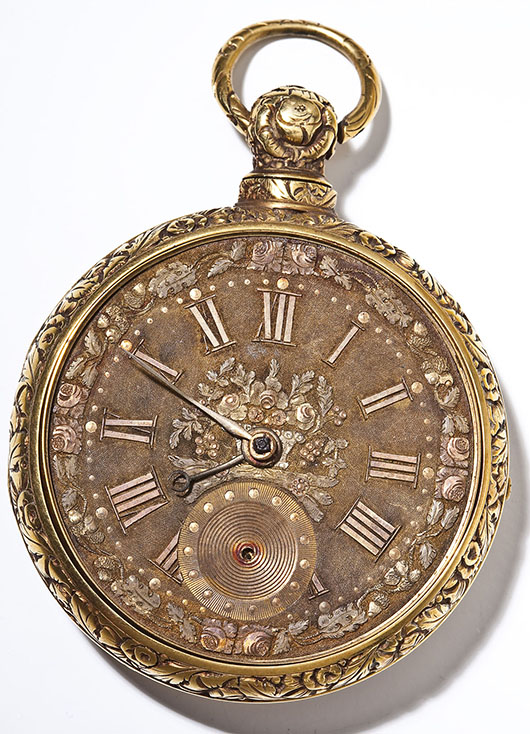 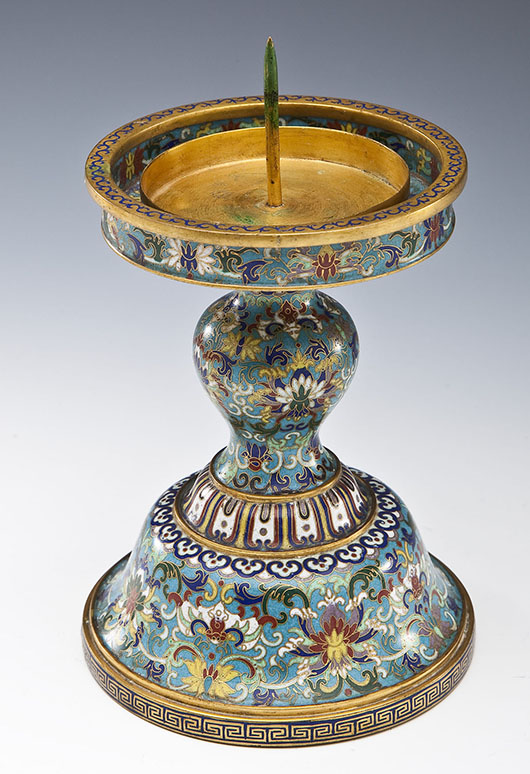