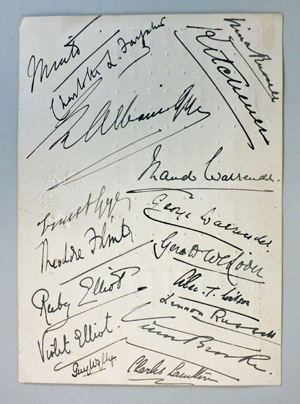 SHREWSBURY, U.K. – A small archive of manuscripts and letters by singer, conductor and composer Sir George Henschel, one of the leading English musicians of his day, sold for £1,000 ($1,639) at an auction conducted Dec. 4 by Halls Fine Arts Auctioneers. LiveAuctioneers.com provided Internet live bidding.

The unrecorded archive was secured by the National Library of Scotland to the delight of the Irish seller who had family connections to Henschel (1850-1934).

Jean Rusden from Shrewsbury, who consigned the archive in the auction on behalf of her sister-in-law, Janet Miles, said “The archive was left to Janet by her grandmother, who was a good friend of George Henschel.

“I know she will be pleased that it’s going to the National Library of Scotland because she wanted it to go into an archive, and Henschel lived in Aviemore for many years and conducted the Scottish Orchestra at Glasgow.”

Born on Feb. 18, 1850 in Breslau, Prussia, Henschel began his career as a pianist but later found great success as a baritone and became a friend of Johannes Brahms. Moving to England in 1877, he became a British citizen in 1890.

He was first conductor of the Boston Symphony Orchestra (1881–84) and later conducted the Scottish Orchestra at Glasgow (1893–95) and taught at the Institute of Musical Art in New York, where he met his second wife, Amy Louis, who was one of his students.

Knighted in 1914, his compositions include two operas, a Stabat Mater, a requiem mass, and songs. In 1907, he published a collection of his journals and correspondence in Personal Recollections of Johannes Brahms and in 1918 an autobiography, Musings and Memories of a Musician.

The auction lot purchased by the National Library of Scotland consisted of a three-page manuscript titled Little Lamb, who made thee, described as “a Song of Innocence (for the little children to sing), humbly set to William Blake’s beautiful words by George Henschel.”

With it were two pages of handwritten music dedicated to “Georgina and Peter” – believed to be Georgina Henschel, the composer’s daughter by his second wife and Peter Cloughton (1915-1968), Henschel’s grandson – and initialed and dated Jan. 18, 1918.

In addition, there was a second manuscript titled The Knight of Bethlehem, set by George Henschel, two pages of handwritten music initialed and dated Nov. 20, 1918, both within a “Keepsake Cover” titled and signed by Henschel and enclosing three printed copies of his music.

There was also a three-verse sonnet written and initialed by Henschel, dated Nov. 22, 1914 and a companion postcard, upon which he writes a new final verse stating, “I think the following distribution of the last six lines is better.”

“Miss Dunlop Smith was the daughter of Lt. Col. Sir James Dunlop Smith, private secretary to Lord Minto while he was Viceroy of India,” said Halls’ books specialist Aaron Dean. “She was a singer under the professional name Janet Christopher and it is presumed that her close friendship with Henschel developed through their professional careers sometime around 1913.”

The first letter talked of a previous sonnet that Henschel had sent, mentioned that he would be traveling to London for a concert at the Queens Hall and hoped that they could meet for tea. The second referred to Dunlop Smith as his “grateful public” in regard to his prior verses, as well as general news and what had occupied his time in Scotland.

Also included in the lot was a program for “Dr. George Henschel’s concert in aid of the funds of the Alvie Boy Scouts Association,” dated Sept. 4, 1913, signed by him, five of the other singers and initialed by Dunlop Smith.

In addition there was a program for Madame Albani O.M. at the Town Hall Calcutta, Dec. 24, 1907 and a photocopy of Dunlop Smith’s diary for Christmas 1907. The diary entry states: “Then everyone signed our hand programmes – I have Kitchener, The Viceroy, Albani’s, Sir George and Lady Maud Warrender & several others – it was quite a wonderful evening.”

Dean said he shared the seller’s delight that the fascinating archive had been secured by the National Library of Scotland. 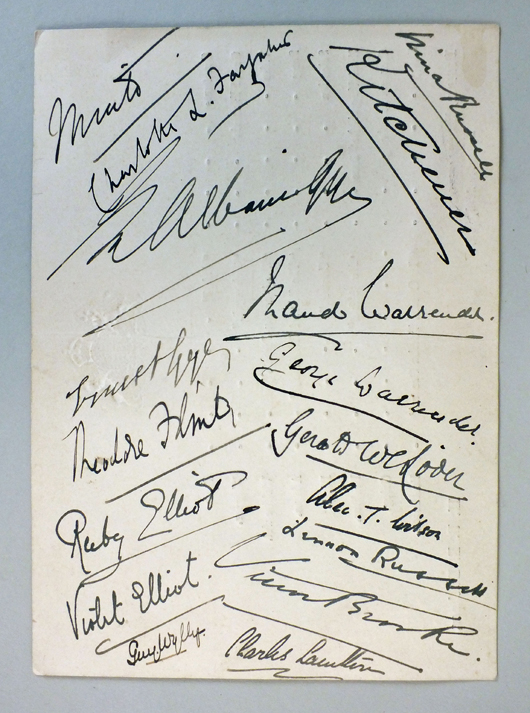 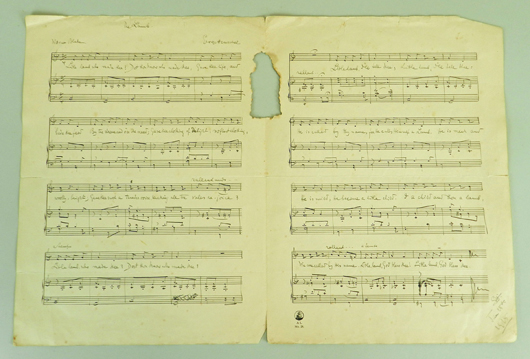